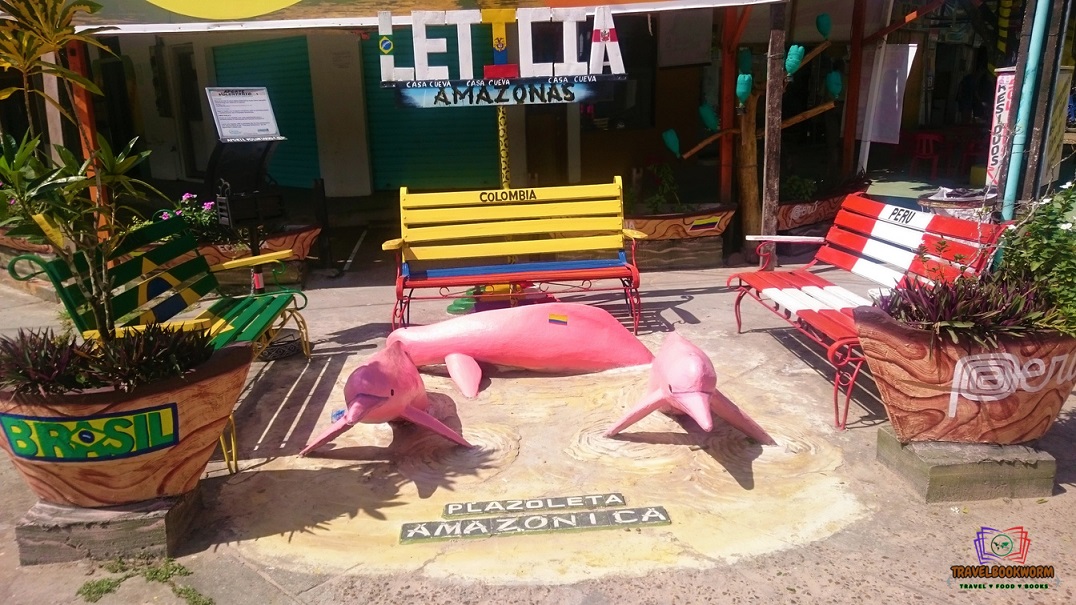 Another must-do activity while in Leticia is to visit the two neighbouring countries, Brazil and Peru. The trip can be completed in one day due to the close proximity between the two countries, and with no physical border between the places, you don’t have to worried about documentation when crossing over. However, no passport needed means no stamp collected for the trip!

We decided to go to Tabatinga first as we heard it wasn’t pleasant at night time. The autobus from Leticia cost 1,800COP per person for locals, and 200COP more for international passengers. There weren’t any passengers when we boarded the bus at the station, but when the bus made its move, we got a few passengers.

After about 15 minutes ride, we decided it’s time to get off the bus. We’re only about 1.5km away from the border, at Mercado Municipal Tabatinga, a busy market in the town. One thing you can immediately notice was the language sign. It was in Portuguese. However, the workers speak Spanish too.

Tabatinga town wasn’t a tourist place. Mostly the visitors only came here to catch a boat to Iquitos or Manaus. We wandered around on foot and noticed that the town was less developed than Leticia, it was dusty on some part, with only the main road paved.

Before leaving Tabatinga, we went to Casa do Chocolate. There weren’t any customer in the shop and with no place to sit, we left without getting anything from the shop. In Castelo Brasil however, which was a much bigger shop, this place has an outdoor seating area with a beautiful brazil sign.

In this shop, we had some alcohol tasting, and I bought one that tasted like Baileys, which cost R$15. The beer cost R$5 each can, and because we ran out of Brazilian real, we paid 2,500COP plus R$2. Brahma @ R$5

The water-taxi ride per person cost 4,000COP from Leticia to Santa Rosa and 5,000COP per person on the journey back. It was slightly more probably because we’re the only two on the ride.

The journey lasted about 7 minutes, and on the way, we could see the Chulo bird perching on the river bank.

When we arrived on this little island on the Amazon river, many motor-taxi drivers on standby and were offering their service to take us around, however, we declined the offer as we wanted to wander the island on foot. It wasn’t a big island, and we weren’t in a hurry or carrying a backpack.

The town was noticeable cleaner and much more beautiful than Tabatinga with its paved walkaway, relaxing vibes which made me feel much safer. Along the main pathway, we saw a disco bar, school, church, some lodgings and restaurants. The building structure mostly constructed with woods.

Our first stop was at a restaurant called Yacuruna. It offered Peruvian and vegetarian food. A few hammocks were hung around on the top floor for customers to relax while enjoying the gentle breeze and greenery view. We didn’t order any food here though, only some beers.

For three big bottles of Cuscueña Trigo, it cost 18,000COP.

Before heading back to Leticia, we stopped by the restaurant we spotted when we first arrived on this island, Restaurante Comidas Tipicas. It has a beautiful Amazonian decoration in the restaurant and also two parrots named Amazonia and Pepe.

Not long after we arrived there, it started to rain heavily, and at the start of the downpour, Amazonia and Pepe were squawking loudly, probably asking for permission to play in the rain. It was entertaining to watch them both enjoying the raindrops while we wait for our food.

The service was quite slow in this place. We waited for forty minutes before the meals were ready. However, the food was tasty and worth the wait. Mike had his Lomo Saltado, and I had Arapaima or known as Pirarucú in Brazil and Paiche in Colombia.

After the meal, I went up to the restaurant’s Mirador. The floor was slippery after the rain though, but the climb wasn’t that high. The view overlooking Brazil and Colombia was great.

The journey back to town was fast and easy. The driver started the engine once we boarded the empty boat. Back again in Leticia, we stopped for drinks at Malecon Estanco bar. We’d walked past this place many times before but never stopped for beers until now.

Malecon bar was a local bar, the type of drinking place that we usually enjoy compared to some fancy bar. Because we could mix with some local plus the price was much lower. It only cost 17,000COP for three Club Colombia, two Aguila for me and one bag of crisp.

When we’re there, we saw a drunken man sleeping on the opposite building and some politician party campaigning in a car with a loudspeaker driving around town. We couldn’t stay long in this bar though because they ran out of Club Colombia.

However, luck wasn’t on our side. Restaurants in Leticia mostly not open for businesses, or they ran out of Club Colombia too. Tired of walking around, we finished off our beer hopping at Tierras Amazonicas Bar & Restaurante and before heading back to the hotel, I went over to Paisa Wing around the corner to grab some takeaway wings.

For 24 pieces of wings, it cost 23,000COP, which was much cheaper than in Bogota that cost 32,000COP for the same amount of chicken wings. However, the quality was incomparable to Bogota. Anyway, our beer hopping in three countries took less than 8 hours, and we enjoyed our last day in Leticia tasting different beers from three different countries!

What we bought from the Amazon: