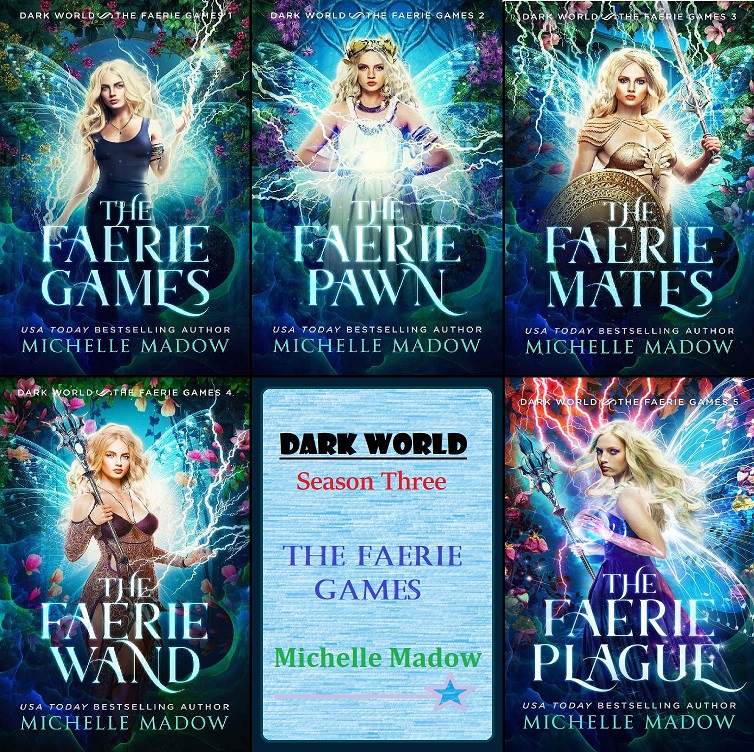 Having to live on Avalon since birth and being forbidden to leave, Selena has no idea the reason for it and the trouble she’d face once she steps out of the safe haven, which she would encounter on her 16th birthday.

The Faerie Games series is season three in the Dark World Universe, and it can also be read as a standalone series, as stated by Michelle in her Facebook post.

I’m Selena Pearce, and in the past few days I’ve been kidnapped by faeries, gifted with powerful magic, and forced by the gods to compete in a twisted game to the death.

Growing up on the magical island of Avalon should be great… but I have no magic to speak of. And my parents forbid me from leaving.

So when I sneak out to Earth for a night and meet a hottie named Julian with ice blue eyes that leave me breathless, of course I say yes to a date with him. But when Julian pulls me through a magical portal, I realize he isn’t human. He’s a half-blood faerie sent to bring me to his realm of the Otherworld. Because apparently, I’m a half-blood faerie, too. And I’ve been chosen to compete in the annual Faerie Games—a brutal, gladiator-like competition where half-bloods fight to the death.

Too bad I can’t get my new magic under control. But with all eyes on me, I only have two options: Die in the Faerie Games, or win and earn my freedom.

Now the other players—including Julian, who still captivates me even though I should hate him—better watch out. Because I’m determined to get home.

And I’ll fight anyone blocking my path to get there.

Having no idea why she is forbidden to leave Avalon, the island where she was born, Selena ventures out using the transformation potion her best friend brews for her as her 16th birthday present. She got only 24 hours to experience earth, so nothing will possibly go wrong, right?

Selena’s decision led us to her magical adventure in the Otherworld, a realm where fairies and Roman Gods and Goddesses exists. She will face some challenges with no one to trust, and she has to make a clever decision as her life depends on it.

The storylines in this first book captured my attention from the first page until the end. I especially love it since there’s Roman Gods and Goddesses’ involvement. The transition in the story is smoothly executed and not so confusing because while there are other characters’ POVs, it does not jump from one character to another frequently.

I need to learn how to control my new magic—before it gets me killed.

As the first ever Faerie Games player gifted with magic from the king of the gods—Jupiter—all eyes are on me. Especially since I won the first competition of the Games. Now I need to send three other players to fight in the Coliseum until one of them is dead.

The two that survive will be gunning for me later. So I need to choose my alliances carefully. And as much as I hate to admit it, the magnetically attractive Julian is tempting me to work with him moving forward.

I should hate Julian, since he kidnapped me to the Otherworld in the first place. But he’s helping me learn how to control my new magic. And I’m drawn to him on a level I don’t understand.

One player will win the Faerie Games and survive. The rest will die.

I need to win. If that means getting close to Julian… then that’s exactly what I’m going to do.

While Selena is busy surviving in Otherworld, her best friend, Torrence, also has quite a few chapters in the book, telling us about her adventure and progress in finding a way into Otherworld to save Selena.

The second book in the series, and it’s still as engaging as the first one. Action-packed, surprise event, tough challenges, betrayal, romance, adventures, you name it and have it all. Loved it!

In the Faerie Games, it’s kill or be killed. And I’m going to survive, no matter what the cost.

Who will win the next Emperor of the Villa competition? Will I tell Julian that we’re soulmates? And most importantly—will Julian, Cassia, and I defeat Octavia and make it out of the Games alive?

I’ll do whatever’s necessary to survive. Because I’m Selena Pearce—raised by the leaders of Avalon, born of a powerful witch and a faerie prince, and gifted with magic from Jupiter.

And I’m not going to let fear control me any longer.

Now that Julian and Selena is no longer burdened with the uncertainty of one another, together, they devise a plan to win the game, but will it go accordingly? Especially when Octavia, the champion who has a beef with Selena from the beginning, is unbeatable in the game.

Meanwhile, Torrence, Sage, Thomas and Reed continue searching and gathering the four impossible to obtain items in exchange for a passage to the Otherworld. It seems something is bound to happen between Torrence and Reed, and it’s exciting to see how it goes for them.

The third book continued with more complex challenges on both sides – the Faeries Games and the quest in preparation to get to the Otherworld. It was a wild ride so far, but reaching the end of the competition, it felt a bit rushed as the author skipped some actions. I also wished Cassia had a different outcome, but I guess it’s part of what makes the story great. A mixture of helplessness and badassness!

I thought I could return home once the Faerie Games were over. I was wrong.

Now, Julian and I must complete the dangerous quest given to us by the Empress of the Otherworld. The Holy Wand is out there. We just need to find it.

No matter where the journey takes us, we’ll destroy anything blocking our path. We have to. Otherwise, we’ll be dead.

The fight against each other in the arena is finally over, and it’s time for teamwork! Selena and Julian must rely on each other to complete the mission to retrieve the Holy Wand and be crowned as the winner of the Fairie games for the year.

Meanwhile, Sage, Thomas, Reed and Torrence are also about to finish their mission. Is King Devin going to keep his word and complete his end bargain?

I loved that Selena had the opportunity to meet up with the fellow fallen champions, and the reunion was touching. The mystery of what happened during the portal creation and what’s wrong with Julian was also a nice touch. It kept me awake long after finishing the book and guessing all the possible scenarios.

I also liked the length of this book. It’s long enough to fit in one hell of a story without making me bored, and I truly enjoyed the adventures and battle of emotions in this book.

Zombies. The fae realm is overrun with ZOMBIES.

Against all odds, I mastered the magic gifted to me by the gods and won the Faerie Games—a twisted, televised game to the death.

After winning the Games, I was supposed to be free to return home to Earth. But that was a lie.

Now a deadly plague is rampaging the realm. The Otherworld is dying, and I might have the power to save it. If I can pull it off, it’ll be the perfect bargaining chip to get back home.

I’d be a lot more confident if my soulmate, Julian, was fighting by my side. But he broke my heart and turned on me. For reasons I don’t understand, he’s been working behind my back with the Empress of the Otherworld this entire time.

The only person I can trust is myself. So it’s time to step into my role as the Queen of Wands and beat the fae at their own game—or die trying.

Season three in Dark World ends with this fantastic book. Selena has grown so much in the span of five books. From a powerless sixteen-year-old girl to a powerful, mature young woman fit to lead her people, the half-bloods. She thrives under a tremendous amount of pressure—what a remarkable young lady.

My favourite scene in this book was when they raced against time to get Circe’s staff back from King Devin. It was nerve-wracking!

Before the wrap-up, we read some tidbits of what to expect in season four, the last series in the Dark World. The prospect seems terrifying since Selena and the teams had indirectly caused harm to the shifter. On the other hand, it’s exciting as we get to read about the twins and continue the story about Torrence and Reed because there’s still so much to learn about the couple.

Overall, I liked this series compared to the previous two. By the way, Michelle still owes us a celebratory festival back in the Otherworld to celebrate the crowning of the year’s champion! Just kidding, it’s not essential. But I wish to get a glimpse of Selena’s progress with her half-blood in the Dragon Twins series.