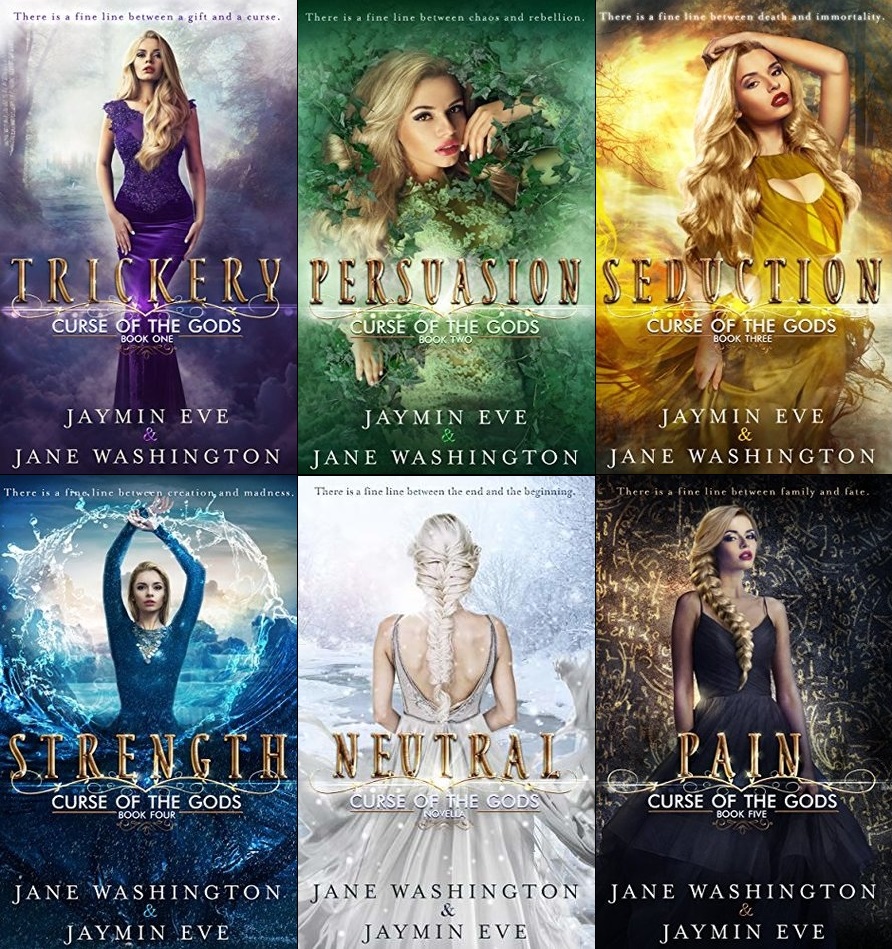 Curse of the Gods by Jaymin Eve and Jane Washington is a young adult fantasy story about one clumsy girl uncovering her power with the five toughest beings in the universe. This series with five main books which is about Willa and the Abcurses and one short story for the sidekick characters. It will either entertain you or pissed you off with the cheesy storyline.

In Minatsol, being a dweller means that you are literally no better than dirt. In fact, dirt might actually be more useful than Willa. Her life will be one of servitude to the sols, the magic-blessed beings who could one day be chosen to become gods.

At least her outer village is far removed from the cities of the sols, and she won’t ever be forced to present herself to them… Until one small mistake changes everything, and Willa is awarded a position to serve at Blesswood, the top sol academy in the world—a position that she definitely did not earn.

Under the sudden, watchful eye of the gods, she will be tasked to serve the Abcurse brothers, five sols built of arrogance, perfection and power. They are almost gods themselves, and under their service she is either going to end up sentenced to death, or else they are going to ruin her so badly that she will wish for it.

The main character in this book was the opposite of what I usually read, a badass female character. Instead, we have Willa Knight. A clumsy girl who was lucky enough to have five male – almost gods to protect her.

When I first heard the Abcurse brothers mentioned about D.O.D, I immediately knew what’s going on, and who the five were. I understand why Willa couldn’t guess; her brain wasn’t functioning well due to the frequent injuries she sustained!

Overall, I didn’t quite enjoy this book. Willa’s frequent act of clumsiness bored me, and how the five protected her sounded so cheesy. However, I’ll continue with the next book, hoping that our dear Willa would somehow magically transform into a compelling character!

I couldn’t remember all the five’s power, here’s a note to myself. In Trickery book, Siret got hurt. Please don’t make Yael hurt in the next book. Otherwise, it would be so predictable!

In Blesswood, there are rules, and someone is trying to teach her how to follow them. The only problem is Willa. Which shouldn’t be anything new, since she has been a problem since birth—something her pseudo-sister Emmy would agree on.

So it definitely shouldn’t be new … but it is.

Because things are starting to happen that have never happened before.

Things are starting to get …chaotic.

This book was much better than the first one. It piqued my interest when something happened during the arena fight. Could it be that Willa was finally turning to a badass? When I finally finished reading this book, I was feeling satisfied! It’s heading to the direction I wanted, and I’m super excited for Willa and can’t wait to read the next book.

The rules are changing.

The dwellers are trying to make their own way in the world, and Willa can’t seem to help getting tangled up in their plans.

Luckily, she has the Abcurse brothers to help her out—until she doesn’t, and suddenly she’s alone again in a world on the brink of chaos. With the Abcurses gone, she’ll have to rely on her wits, and her sister Emmy, to stay under the radar and survive.

Because someone wants her dead.

But, really, what else is new?

Finally, I’ve been wondering what would happen if Willa was left alone without her protectors. It turned out to be okay; she’s handling it well with the help of her power! In this book, Willa ventured to Topia with the magical creatures, Pantera. She learned the tidbit of the creator and also how she got her power.

The creator and the gods weren’t perfect, and I hope when Willa finally able to control her ability, she’ll help to restore the order in the world with the Abcurse brothers and also Cyrus, the neutral god. I couldn’t guess where he stands at this moment. If Cyrus has an ulterior motive or if he’s in Willa’s team. One thing for sure, at this point, I was bored with Willa antics – clumsiness and losing her clothes. Come on, Willa, it’s time for you to wake up and lead the team!

Willa and the Abcurse brothers are back, and more determined than ever to stick by each other. Unfortunately, Staviti has other plans, plans that threaten to change the natural order of the worlds—though nobody really understands why. His agenda may very well affect all beings on Minatsol, even those that thought themselves safe in Topia. Even Willa-invincible-Knight.

Unsure with her new place in the worlds, Willa must follow the Abcurses to their new post: Champions Peak, a secluded mountain far from civilization, where the most powerful sols have been summoned to hone their abilities through direct contact with the gods.

There is a chance that she might survive her time on the mountain, but it seems like staying alive amidst the powerful occupants of the Peak is the least of her concerns.

Her real problem is staying on the mountain at all.

I wished Willa has a personality like Emmy. Her childish behaviour had made me rolled my eyes most of the time while reading the book. I loved her best friend, Emmy, who’s smart and strong-headed. However, I would also like to thanks to Willa, who’d made Emmy’s future looking good especially if Cyrus and Emmy would become an item! I can’t wait to read the next short stories featuring the couple.

We’re also getting closer on discovering Willa’s extent strength, what she was, and who her father was, could it really be Jaken? With only one more main book left, I hope the authors would give us a beautiful conclusion without leaving us feeling that it was hastily made.

Sometimes, the end is only the beginning.

Emmy was born a dweller and she expected to die as a dweller … until Willa changed everything. Now she has no idea of her path, and she certainly wasn’t prepared for what would happen after her death.

Caught in the middle of a war that threatened to prove much more significant than anyone had ever expected, there is only one person who can help her … but his terms are steep.

Cyrus was born out of necessity: a being of light, brought to life with a singular purpose. Time has changed him and the recent events have unsettled him … but a certain transformed dweller is about to do much worse than that. She is about to turn his existence upside down.

Topia is giving them no choice: they survive together, or the war is lost.

In this book, it continues from where it stopped in Strength. Emmy visited Willa when she’s awake, and she also went away with Cyrus to find out about her power, and later on, joined by Willa’s team to search for the answer to the weird occurrence in Topia.

I loved this short novella! I wished Emmy had made more apparent from the start, but since we’re closing up to the end, this was good enough for me. Emmy and Cyrus were such great side characters in the story, and I loved this couple.

Willa Knight: The saviour of both worlds, or the destruction of everything?

Sometimes history lies, and the tales of Minatsol and Topia are no different. Since the birth of Topia, Staviti has woven a web of deceit around the truth of Creation, striving only to maintain his power while destroying anything that gets in his way.

Now, Willa and the Abcurses are determined to strip back the layers, to uncover the truth, and to understand the true nature of the two worlds before it’s too late.

Any wrong step in their quest to restore balance might have terrible repercussions. Every single being—living or dead—might have to pay the price.

Either way, she is in trouble.

No, no, I didn’t like the ending. Defeating the creator shouldn’t be that simple. However, I loved that everyone has their happily ever after. This series was my first RH series, and I find it quite weird and impossible. Our male earth specimen wouldn’t be as tolerant as the Abcurses!

Anyway, I’ll try to read other stories under the same genre, who knows I’ll like it better with a different storyline. Willa just not the character for me, she’s so childish. She always jumps up to her men like a little kid would behave with their parents. Well, that’s what I envision. LOL…Okay, enough of me ranting, and off I go to read another series by Jaymin Eve.