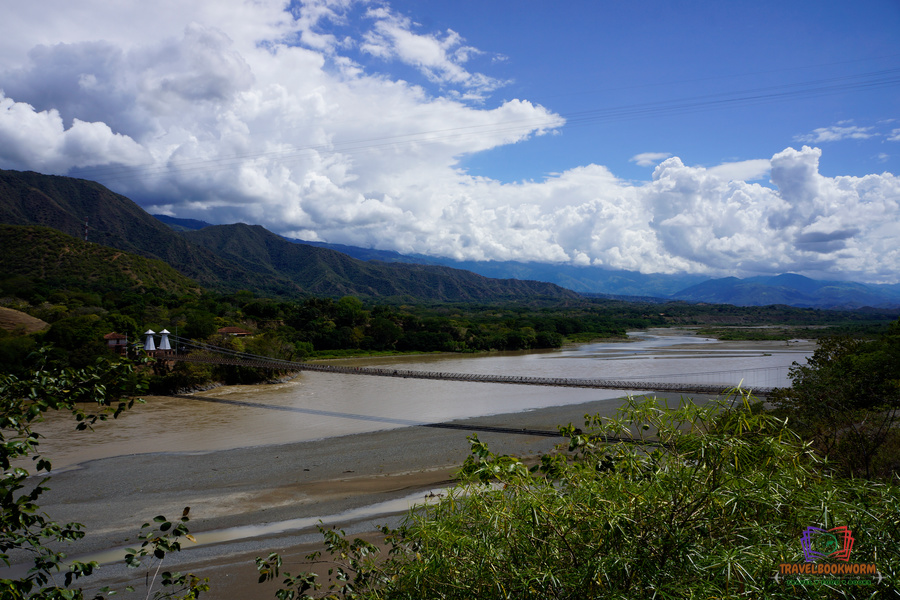 Santa Fe de Antioquia was another town with whitewashed colonial buildings and cobble-stoned streets in Colombia. This town was almost similar to Villa de Leyva, minus the big square and also the temperature.

The temperature was about ten celcius warmer than Villa de Leyva and closer to the second biggest city in Colombia, Medellin. Jorge Robledo, who founded this town in 1541, tasted its glory when it was declared a capital city until Medellin took over the title in 1826.

Getting a taxi to this place was a bit of a hassle. Most of the taxi driver had told us that they couldn’t do it because of the trouble getting a permit to leave Medellin. Uber was another option, and the cheapest rate we saw was 160,000COP, and it fluctuated depending on time and day when we browse the option.

Because of the factor such as uncertainty of the pricing and trustability, we accepted the fare offered at 200,000COP from the taxi driver we met last night at La 70. The journey of 50.3 km took two hours and five minutes.

We booked this apartment through Airbnb. It wasn’t in the town centre but located about 1.7km away from the main square in town. It had three bedrooms, two bathrooms, a living room, a balcony and a fully equipped kitchen.

This apartment shared with a few others block, and the unit itself located close to the guardhouse. The shared swimming pool was about 30 metres away, and a few steps away from the swimming pool, we could also see the gorgeous view overlooking hills and the Cauca River.

My only complaint about the master room we occupied was the curtainless window. It was hard not to be awake by the bright sun early in the morning. The other two rooms were alright, and Trev didn’t have any complaint.

The Devils Festivities / Fiestas de Los Diablitos was held annually in this town, and it was the most popular and the oldest carnival in Antioquia. In the 17th century, sugarcane plantation workers/slaves were granted only one day off. So, they would dress up with capes and masks on this precious day off, mimicking their master, and the followed suit events were getting drunk and dancing until late at night.

The event continued even after slavery was abolished, and this year, it marked 366 years since it first started in 1653. More info on this event: Fiestas de los Diablitos.

This suspension bridge made of iron and steel was built toward the end of the 19th century by Jose Maria Villa. He was an engineer who studied in New Jersey and participated in constructing the Brooklyn Bridge and several other bridges in Colombia such as La Pintada, Puente Iglesias and Puente Navarro bridges in Honda, Tolima.

The junction leading to this bridge was on an old road, 200m away from our accommodation. We went for a walk, which was about 4.1km to this bridge on our last day here. We never saw any cars, and we expected it because of the narrow span of the bridge. However, there weren’t many tuk-tuk or bike passing as well.

We didn’t see others walking on the road during our walk except for the two guys who were smoking weeds walking a few metres away in front of us. We were a bit wary and tried walking at a slow pace, keeping a distance from them. However, when they stopped in some shady place, we overtook them, and since then, we didn’t see them anymore.

Another thing we noticed was people working on a small river. A long time ago, the Cauca river used to be famous for mining gold. Now, only a few of them left trying their luck to find the precious gem. We saw the people panning for gold using the Barequeo technique, a traditional panning technique using a manual tool to look for gold.

We had our drinks in this bar on our first night, but I wasn’t sure what’s the name of this bar, but it was located across Iglesia de Nuestra Señora de Chiquinquirá, close to Plazuela Martínez Pardo.

Compared to drinking next to the main square, this bar was relatively cheap at 85,000COP for one bottle of Ron Medellin for Trev and a few beers for Mike and me.

During the Devil festival parade, people started to congregate outside the bar, blocking our view. We had to leave our seats and join the crowd outside to watch it. Not a wise move to leave your drinks unattended, but thank god, no one spiked our drink.

Another place worth mentioning was this corner restaurant near Santa Barbara church. It cost 67,000COP for three meals and one beer. My fish was excellent, no complaint from Mike for his Pechuga and menu del dia from Trev. However, Trev did say that the toilet was small!

After our hot and sweaty walk crossing over the Cauca river, we had our lunch in this restaurant. It was nice and refreshing with the cold juices (Maracuya and Mora) plus an additional two coca-cola to quench our thirst. The food tasted great too, and it all cost 46,000COP.

However, the service was a bit slow due to so many people stopping by for lunch. Most of them weren’t from the side where we came from but from this side.

As for the place near our apartment, there weren’t many shops. Just some tiendas and local bars about 500 metres away. That bar which I couldn’t remember the name was Trev’s favourite drinking place. He miraculously managed to interact with the server by hand gestures. He even had a haircut after recommendation by his newly acquainted friend.

We once sat outside one of the tienda, having our meals at night, which consisted of sausage, some meat dish, and a few bottled beers, and it only cost 27,000COP. That was after our first night out in the town, watching the parade. Now here, we watched people salsa dancing on the roadside, having fun.

While we’re strolling around the town, right before our lunch at La Comedia, we stopped by the park in front of Iglesia Santa Barbara and noticed trees bearing beautiful red fruit. We weren’t sure what it was; even the local, an old couple that we asked, didn’t have any idea of the name. But they told us it was edible.

Based on the picture and help from Google while conducting my research, the fruit was called Ackee or its scientific name Blighia sapida, a national fruit of Jamaica. I wondered how it got here. Anyway, the pods and seeds were used for cooking when it’s ripe, but it wasn’t safe to eat for unripe Ackee due to the high level of hypoglycin, which could cause vomiting and even death.

Because we weren’t taking a bus coming here, we didn’t know where the terminal located. Luckily, while searching for Gym in town for Trev’s use, we saw it. Hence, on the 1st day of the new year, we walked from the apartment straight to this place.

We didn’t book the ticket beforehand but bought it when we arrived there. It cost 13,000COP per person. Our ride was at 9:00 am, and when we got on the bus, there’re only a few souls around. The driver didn’t even wait until the departure time but left three minutes earlier.

The two hours ride was very comfortable, with plenty of legroom. Once we arrived at Terminal Del Norte Medellin, we hopped on a taxi to Localiza Rent a Car – Medellin 4 Sur to get our rental car before we could continue to our next destination, Jardin.