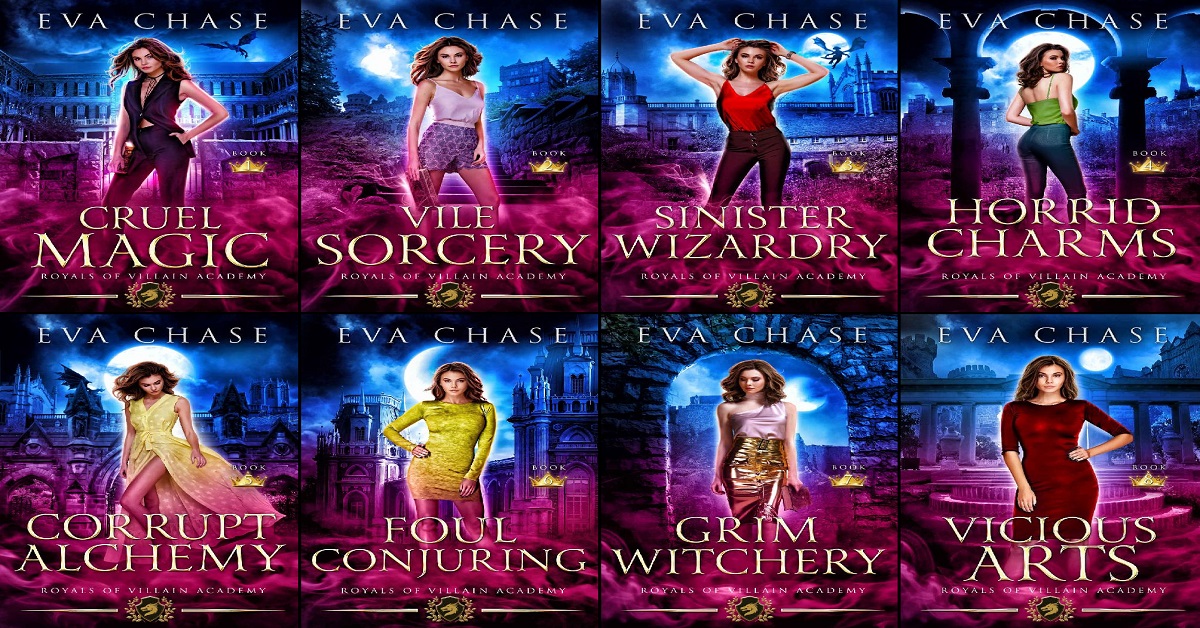 A story with one badass heroine who endures bullying at Bloodstone university, a university for the villains. With a slow-burn romance from enemies to lovers, betrayals, battles and deaths.

I thought I was ordinary Rory Franco: college student, artist, and over-protected daughter. Then mages barge into my family’s home, murder my parents, and whisk me off to a university known to the rest of magical society as Villain Academy.

It turns out I’m Persephone Bloodstone, the long-lost heir to one of the five royal families of dark magic. I’m destined to learn how to manipulate the world with fear—and to stand beside the four other scions: the scorching-hot, arrogant young men who rule this school.

Unfortunately, I’m having trouble locating my supposedly wicked skills. I don’t want to use a power that feeds off people’s pain, but I have to tap into my talents fast if I want to survive. I’ve got no time to grieve for my family. The students here are even more vicious than the teachers, and my fellow scions are worst of all.

The four of them crush anyone who doesn’t kowtow. No way will I bow to any villain, no matter how brutally alluring. They can turn on the charm or tear me down, but they can’t break me, even if I can barely get my magic working.

They’ve never met anyone like me before. I don’t care about ruling. I just want to avenge the people I loved.

It doesn’t matter what kind of power runs through my veins. I’m taking Villain Academy down.

Usually, the book about magic, which I’d read so far, was all about the characters on the good team side, training and getting ready to fight off the villain. So, if that’s the case for this book, we would have read that Rory is from the Joymancers’ lineage and not the Fearmancers. So, it took me a while before finally accepting the fact that we’re on the villains’ side. But I get that this will all change later on.

On the other hand, the story contains many bullying situations, making my heart ache for Rory, the heroine. However, Rory is also a good-hearted person even though her heritage says differently. Her stubbornness is the feature I like in her character, as she doesn’t surrender easily and puts up excellent shows to the bullies in the academy.

The abilities Rory would get, no doubt, are predictable tho. Nevertheless, I have fun reading this book and look forward to reading the next one!

In a month, I’ve gone from magicless to one of the most powerful dark mages in the world. You’d think that would make my life easier.

But all that power is only potential until I learn how to wield it, and my enemies have a huge head start. While I’m picking up every skill I can, adversaries both within Villain Academy and beyond it are working to knock me down.

My fellow scions? I can count at least a couple of them among those enemies. The others… Let’s just say the lines between light and dark have gotten a lot more blurred.

Nothing’s safe here—not my mind, my heart, my magic, or the few people who’re proving themselves my allies. When the danger turns deadly, will I be able to save all of them and myself?

I’m not here to enjoy the romance but the story! So far, I quite enjoy reading Rory’s sort of adventure in discovering her heritage and also horning her abilities, which is good because you don’t want your heroine to suddenly kickass!

I look forward to reading more of her bullying experience and how she would counterattack it, especially from Victory? She has gone quiet in this book. Hopefully, we’ll read more about her in the next book.

Do I want to spend my summer with my vicious classmates at Bloodstone University—better known as Villain Academy? No, thank you. But I’ve got to find a way to tackle my enemies before they try to destroy me again, and the trail to potential answers starts there.

I’ve had it with taking the high road, though. Come at me, and you’d better believe I’ll hit you back just as hard. Maybe that’ll mean I have to tap into my dark magic instincts more than I’d ever have planned to, but I’m not letting one more person I care about get hurt.

That also means I’ve got to steer clear of the one guy I completely trust, or I might ruin his life too. With two of the other scions vying for my attention and the last shifting his campaign against me in an unexpected way, I’ve got my hands full as it is.

I can’t say whether I’ll survive everything this summer has in store. All I know for sure is it’s going to be a hot one.

Hell yeah, the story was captivating, enough to entice me to read this book in one sitting! I loved it when Victory and the gang bullied Rory! Thank god for the scenes, and how Rory retaliates against the bully is fantastic! As for the Scions, the battle to win Rory’s heart has begun. That applies even for the hardcore scion, Malcolm!

One thing I noticed about the books so far is that there’s always someone dying! I hope in the next book, the characters from the villain’s side will be the ones taking the fall. Oh wait, they’re all villains, except for the first book! Anyway, I mean those who don’t belong in Rory’s circle.

Every time I turn around, new opponents are looking to knock me down. No part of the magical community is safe. And now my enemies have left me with a horrible accusation hanging over my head, using so many tricks I can barely defend myself.

If I want to clear my name and keep my freedom, I have to turn to the guys who once made my life hell. They’ve changed their tune and made amends, but how far can I really count on them? Especially if they discover that my greatest foes are within their families.

I’m going to have to find out. The truth can’t stay hidden forever. But no matter what the villains in the university and beyond it throw at me, I won’t give in. I’m the last of the Bloodstones… and hanging onto that role may be the only way I can save everything that matters to me.

I’m glad that no one died in this book. Instead, we have the possibility of someone who we thought was dead but alive! However, that would change the villains’ politics, and Rory might be dispensable!

Hopefully, as all four Scions are warming up to Rory, things will get easier for her next. However, the badass scions are also plagued with issues of their own, making things interesting. I cannot wait to find out what’s going to happen next.

Having my birth mother back in my life? To say it’s a big transition is an understatement. Especially when she’s basically a stranger to me, and I’m not sure yet whether I can trust her to be any more maternal than the average fearmancer parent (which, spoiler, isn’t much).

Unfortunately, the other barons aren’t giving me time to ease into the situation. They’ve turned their sights on my fellow scions and newfound lovers, putting them under fire from far too close to home. As if that wasn’t enough, an unsettling plan is unfolding that threatens every student on campus.

I’m starting to think there’s more at stake here at Villain Academy than I ever suspected. While I’m facing uncomfortable revelations at every turn, can I find the strength to protect everyone I care about?

By the end of the story, we get to exhale a relief sigh that the bonds between the scions are getting stronger. No matter the situation, they will not abandon one another, and the fierce loyalty is freaking awesome!

One thing is for sure when the time comes for these five young Scions to take over the leadership, the Fearmancers will have a solid and bright future! They are the force to be reckoned with, and I want to be in their circle too! Villains or not, the Joymancers – the opposition aren’t great either!

By the way, I’m still wondering what happened to Rory’s mum while in Joymancers’ captivity. Maybe we’ll get to read about that in the next book!

I’ve won one victory against my enemies, but it seems the barons are just getting started with their new, vicious schemes. They’ll stop at nothing to expand their power.

Any move I make to oppose them could have horrible consequences for both me and the guys I love. My only hope is to play along until the right opportunity comes my way.

There’s a chance I could sway my mother if I can earn her trust. She may be brutal when she feels she needs to be, but I’ve seen glimpses of a softer side underneath. Can I walk the line between obedience and resistance without losing so much more than I already have?

Unfortunate injury, united Scions, betrayal, unexpected allies, and a small victory are all the events in this book. It’s action-packed with some tense moments that will make your heart race from worrying about the characters’ safety.

Since we are almost reaching the end of the story, I just thought of highlighting one thing that has been bugging me off – the tracing spell on Rory.

If I’m not mistaken, the spell’s range had been relaxed but not completely removed in book number two. After that, there’s no mention of this anymore. I’m sure when Rory went over to rescue her mother thousands of miles away and went to Joymancer’s HQ, it should alert the Blacksuits team for unauthorized movement!

I’m not sure about the night out with Jude in his apartment in New York tho. Maybe it’s within the distance 😉.

The battle lines have been drawn. My fellow scions and I stand on one side, and the power-hungry barons on the other.

The scheme they’ve put in motion could shatter both our community and the nonmagical world. Neither I nor the guys I love are willing to let that happen, but with the barons throwing both laws and parental bonds aside, we’re short on options. The fate of our world could come down to a literal battle for our lives, one I’m not sure we have any hope of winning.

Will the strength we’ve found together and the allies we’ve managed to gather be enough to carry us through? How close to the barons’ level will I have to sink to have a chance at victory? As our time runs out, the only thing we can count on is that blood will be spilt—and lots of it.

I’m glad to stumble into this author because her books are complete series and mostly have four books, in which the longer the stories go, the more I will enjoy! However, her books’ downside is that they all have the same reverse-harem genre, and every time I read this type of book, it still weirded me out. BUT, because they have fantasy/paranormal elements, I can accept that.

This is my first time reading from this author, and I’m already impressed. The challenges, dramas, friendships, nemeses, and battles, followed by the conclusion, are all wonderfully written. I think the characters are all well described too! Having binge-reading this series, I can easily distinguish each character, and I agreed with Rory’s opinion in the last chapters during the vows. They summed up nicely about the characters.

Overall, it’s a lovely read, and I will continue reading all of her completed series. The only problem I have now is deciding which one to read next! 😂