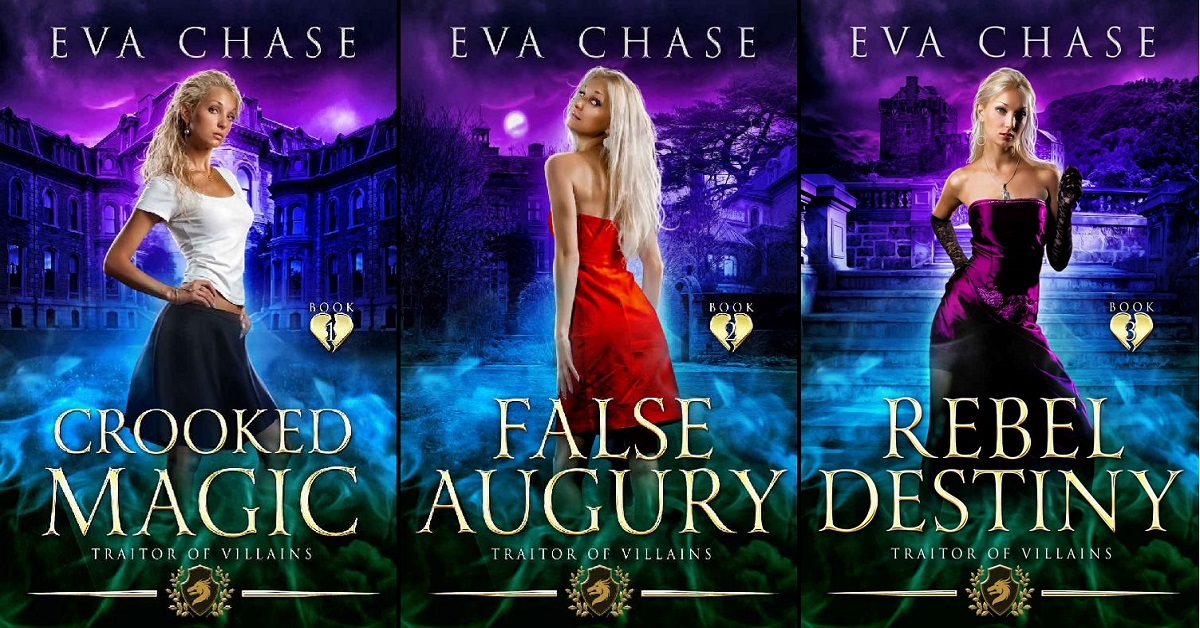 Magical conspiracies, an outcast heroine, and a fraught romance. Traitor of Villains Trilogy is a spin-off to the Royals of Villain Academy.

Hero. Traitor. It all depends on which side you’re watching from.

When the vicious ruling mages launched a war against their heirs, they tore the magical community in two—and I walked out on my family to stand with their enemies. You could say I was championing compassion over tyranny, but really it was pure self-preservation.

Two years after our victory, I’m tutoring a way-too-charming heir who’s totally off limits, dodging my parents’ vengeful spells, and trying to figure out where I’ll land after graduation. My once-prestigious ancestry isn’t doing me any favors. Most of my peers look at me with more suspicion than warmth.

Then a mysterious, brooding man arrives on campus with news of a conspiracy that could destroy our newfound peace. To unravel it, I’ll have to reconnect with the dark side of our community. Disavow my few friends. Woo the mages who idolize my family.

If I fail, they’ll probably kill me.

By now, I know there are worse things than death. And this might be my one chance to prove I’m more than a traitor—to my allies and myself.

But with the charming heir and the mysterious brooder along for the ride—two bad ideas I can barely resist—and a horror from my past rising from the ashes, I’m in way over my head. Will I win the day? Ha. The real question is, how much am I going to lose?

I was pleasantly surprised when I learned that Traitor of Villains was a spin-off to the series I’ve just finished reading! So, choosing what to read next has become a no-brainer! You should, too, if you’re like me, having a hard time letting go of the bloodstone academy’s characters.

Having just finished binge-reading the Royals Villains Academy, the characters from that series are still fresh in my mind, making the integration into the world much easier. However, convincing my brain to accept Cressida and into her life is a different story and still needs a little work.

Previously, Cressida was one of the students in Bloodstone university who bullied Rory and later saved Rory from murder accusations in return for some favour where she became part of the Scions guard. There’s so little we know of her from the Royal Villains Academy series, except that all her acts have been pure selfishness.

This book continues with Cressida as the main character and her quest to prove her loyalty to the new barons. Declan’s brother, Noah, and a new character, Emeric, are the two males portrayed in her romantic interest. Unlike its predecessor series, this first book contains only Cressida’s point of view, and the story is a little short. BUT it’s still with a killer cliffhanger!

I thought I was fighting to prove myself, but it turns out I’ve been duped. The traitor betrayed… I guess there’s a certain poetic irony to that.

Unfortunately, neither poetry nor irony is going to get me or the guy I inadvertently dragged into this mess to safety. I’ve got nothing left to bargain with. So when the worst of our betrayers offers us a way out, what choice do I have but to take it?

There’s a long journey ahead of us, one I couldn’t have been prepared for. One that’ll require I somehow trust the last person I want to. One that’ll push all three of us to our limits—with no guarantee that we’ll make it to the end alive.

False Omen? What does it have to do with the story? Nothing! Perhaps, False hope might suit best. But it does not matter because what matters most is the contents. I loved the scenery, plot and characters; I enjoyed every moment laid out in this book, and I find the story is much better than the first book.

It’s hard not to love the book when plenty of actions, adventures, challenges, and surprises await in every corner of the story.

But, the weird thing is that, when I reached the end of the story, I thought, what’s the point in pursuing them when something has already been planted in Cressida that could hurt the barons. Why not just let them have the easy escape? We will find out how they fix the issue and eliminate the reapers in the last book. It’s going to be a bloodbath again!

My enemies have dug their claws into me far deeper than I ever realized. All I wanted was to help the people who’ve supported me so much… and instead, I’ve become their greatest threat.

With every expert the barons can draw on struggling to pick apart the strange magic lodged inside me, while one of my new lovers is forced to keep his distance, I can’t help wondering if my parents have won after all. I’ll be lucky to even survive the next few weeks.

But that means I don’t have much to lose. Cressida Warbury was once one of the rulings mean girls of Blood U. I gave up my bullying ways, but maybe it’s time to bring the bitch back—and turn her loose on the villains who thought they could destroy me.

Of all the books in the series, book number two is my favourite. This final book does not contain much excitement, such as book two’s nerve-wracking adventure and actions. This book is also short!

Overall review of the Villains’ world: It’s full of challenges for the younger generations, and one thing consistent is that the parents are horrible towards their children. So, if you would love to read how awful the parents are treating the children and how the children retaliate, please read this fantastic series.

In the meantime, I would like to express my disappointment that this trilogy is not about the Joymancers. It seems to be a waste of a good plot. Since we’ve already been introduced to another side of the community, perhaps, in future, Eva will write one for them and include the team back for one last happily ever after conclusion for the two factions.