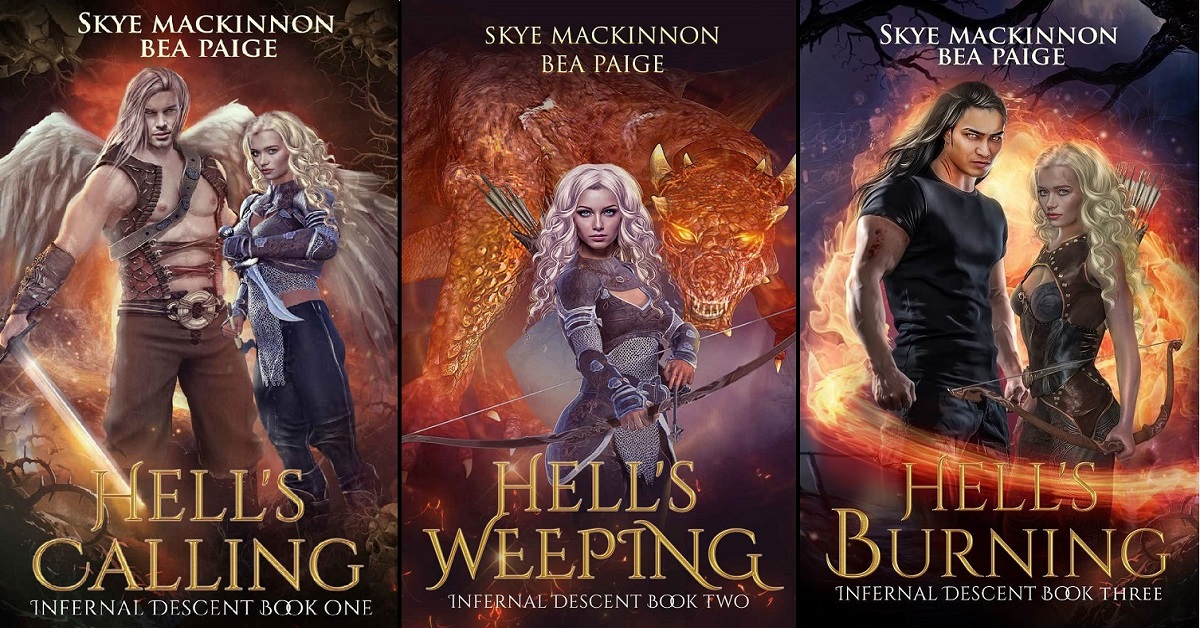 One human, an angel, a hellhound and a wolf. A journey to the centre of hell for a rescue mission. A reverse harem based on Dante’s Inferno, but with a kickass heroine.

She never meant to sell her soul… least of all to Lucifer.

The devil has taken her sister. Now she’s going to bring her back.

An angel with a dark past.
A wolf with anger issues.
A hellhound who’s actually quite cuddly.

Yes, this is a journey into hell. Grab your tissues and snacks for this will be a rollercoaster into darkness.

I discovered the story in Realms and Rebels book, where various authors have their stories published in this massive collection of Reverse-harem stories. While my primary purpose was to read Raven’s Fall novella by Eva Chase, Hell’s Calling, the first book of Infernal Descent, caught my attention immediately. Since then, I’ve postponed reading Their Dark Valkyrie series and started with this series, eager to find out what will happen next.

Ciera, the heroine in the story, has accidentally caused her three years old step-sister, Tris, to be taken away to Hell as her soul’s replacement. Her adventure in Hell to reach Tris is full of challenges, and it’s fast-paced with some hilarious moments with her three companions – An Angel, Cerberus and Wolf.

The story is short, easy to read, and told from Ciera’s point of view alone. Like other Reverse Harem’s books, I wonder if Maro, Ceb and Plutus get to have their POVs in the next book. What other secret will Ciera discover in her companions, and will she be able to rescue Tris? At what cost?

With every circle, hell is getting hotter…

Ciera and her three companions are travelling further into the nine circles, more determined than ever before. But it isn’t just demons and trials they have to worry about, the Devil has set his eye on Ciera and is doing everything possible to stop her succeeding.

She’s determined not to let him, and with her men by her side, and her new talents emerging, there’s nothing Ciera can’t do. But there’s always a price to pay in hell….

Summary: Story is fast-paced, action-packed, and with mind-blowing adventures.

Please beware of the cliffhanger in this book, for if it’s not because of Tris’s POV, it will make you dive immediately to the next one. Yes, you hear me right, Tris is making an appearance in this book, the first time I read from Tris, I thought, how could a three years old girl give her POV? That was before we got the explanation, and it all makes sense.

Ciera and her companions manage to move on to deeper circles in Hell, and the obstacles are getting harder. I believe if Ciera is alone in that damned place, she wouldn’t be able to pull it off. Now, how will Ciera find a way to rescue Tris after the revelation from her mother? It’s like the devil collected Tris as promised and not because of her 🤔. It sounds like Ciera is off the hook, right?

There are worse things than the fires of Hell…

Ciera and her men have progressed to the innermost circles where only the worst sinners are imprisoned and tortured. They will have to make their way through those perilous places to reach her sister.

Lucifer won’t give Tris up easily, though and it might already be too late for her to be saved…

I kept checking if I fell into those categories of punishment every time Ciera ventured into the new circle and asked what the sinner committed to getting the sentence. Oh boy, we do not want to go to hell because the vivid details in the story make picturing the scenes easy, as clear as daylight, and it’s downright scary!

I love the ending to the story, and I feel all the emotions in this book: anguish, strong bonds, and determination. It’s beautifully written with characters that can be distinguished easily from one another. Personally, I love Ceb’s attitude. He was a fun character. I will certainly look forward to reading Tris’s book if they write it in the future!