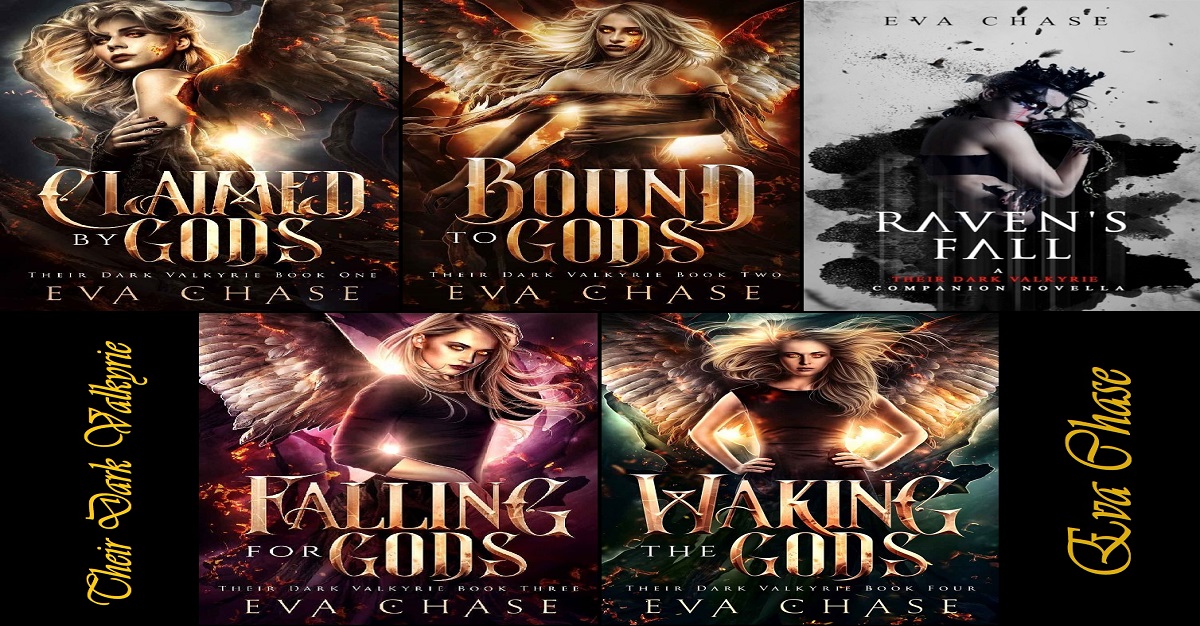 The gods walk among us. And they just might steal your soul… or your heart.

I thought I’d survived everything life could throw at me. All I wanted was to keep my distance from the criminals I work for and get my little brother out of the hell that is our mother’s house.

Then I died and woke up to four stunningly hot gods telling me I’m now a valkyrie.

Sly, sharp Loki. Jovial but ferocious Thor. Dreamily compassionate Baldur. Grim and secretive Hod. They all have something to teach me. And around them, my walls start to crack.

But the gods didn’t summon me just for kicks. Their king is missing, and they need me to find him. The first three valkyries they sent on the job never made it back.

More power is awakening in me than I could ever have imagined—and the gods’ enemies are more devious than even they knew. It’s going to take every trick in the book for me to save myself, my brother, and these divine men who’re getting under my skin in the most alluring way.

I’m Aria Watson, and Valhalla ain’t seen nothing yet.

I usually read Greek mythology, and this series is about Norse mythology, in which some of the gods are still kind of foreign to me. In my country, we never learn about mythology at school, so reading this genre is always refreshing, and I love it.

This book’s premise is super exciting, with the promise of adventures, actions, a kickass heroine and romances. The story is fast-paced, and POVs are told alternating between the characters, but mainly from Aria Watson, the heroine in this story.

Long story short, Aria has been given a chance to live again as a valkyrie. Her primary purpose is to detect where Odin has disappeared. She has her training with the help of Thor, Loki, the twins – Baldur and Hod, and sometimes Freya, Odin’s wife, offers her emotional support. The bonds are forged with her makers/trainers, and soon, she disembarks on a dangerous search mission.

This is not my first time reading Eva’s books, so I already knew that she loves giving the readers a killer cliffhanger. There’s no exception with this book, so be prepared and ensure you have all her books in the series on hand before starting reading this first book!

One minute I was a courier for criminals, making ends meet so I could take care of my little brother. The next, four stunningly hot Norse gods had brought me back from the dead with wings sprouting from my back and a whole set of valkyrie powers. I guess that’s just how life goes sometimes.

Too bad our victory over our supernatural enemies turned out to be a farce. The divine home I thought I’d receive is a trap instead. A trap that’s slowly closing in on us, dredging up every painful moment from our pasts.

Can I trust these tempting godly men now that I’ve seen how many secrets they’ve kept from me? And what am I going to do if I have to face my own darkest horrors all over again?

I’d better figure that out fast. Because I’m Aria Watson, and I will not be broken.

Trapped and unable to escape, Freya, Thor, Loki, Baldur, Hod and Aria must find the weakness of the prison conjured by the villain. With the past secrets on display for everyone, how would Aria react, and what other nasty secrets will be revealed?

Our Valkyrie is doing a great job trying to help the Norse gods battle their demons from the past, and if it weren’t for Aria, they would have never been able to escape and rescue Odin.

The story in this book is as entertaining as the first one. I have so much fun reading the first and second books, and now that the misunderstanding between the team has cleared, I look forward to a more dynamic team and reading how they will save Midgard and battle the villain.

In the realm of fire, Odin’s raven of memory discovers both danger and desire.

Sent by Odin to the realm of fire in a new human body, Muninn—raven of memory—wants nothing more than to get home and back into her usual form. But when three very different men come to her aid after a dragon’s attack, she reluctantly agrees to help them make their escape too.

Can she trust these three strangers with her newly awakened heart? And how far must she go to see them through this perilous realm alive?

I wasn’t aware of the existence of the prequel novella Raven’s Fall. When I read the note about it at the end of book one, I immediately searched for it, which the book is published with a bunch of other authors, and thank God I found it sitting idle in my Kindle since 2018!

Raven is another character we read in book one. We know her by the name of Muninn. She is Odin’s Raven memory of the past and has always been with the Allfather. What we learned from this companion novella reveals the culprit behind the disappearance of Odin, the Allfather, and the reason for it.

Honestly, I regret reading it immediately after book one, for I got the spoiler! Even though I got the inkling from the first book, I’d still prefer to read the revelation in the main books. Perhaps read this book after book number two or three?

Who would have thought I’d need to die to really come into my own? But with my growing valkyrie powers and the scorching hot Norse gods who resurrected me by my side, I’ve never felt more alive.

If only I could take a moment to enjoy my new home in Asgard. Unfortunately, our recent triumph has enraged a power-hungry giant who wants to see me dead all over again, along with everyone and everything I care about. And then there’s our newly returned leader…

Odin has turned out to be as single-minded as he is single-eyed, and I can’t shake the feeling that there’s more to this situation than he’s letting on.

My four gods and I will have to depend on each other if we’re going to find our way through this mess, even if opening my heart that much to anyone terrifies me. I’ve come this far. No way am I backing down now.

Nah, the team members are still bickering with each other. So much for a dynamic team, huh. But, their combined power is getting better control with practice, and at least they tasted a small victory in the end from the teamwork, even though it only lasted for a brief second.

Since the fight is just about to begin right from the start of the story, I foresee a defeat. But, I expect a victory in the end! There are still some unanswered questions from the previous book, such as Odin’s late-night visit.

Are the other gods coming to help them in the end? How are they going to win the battle with only seven of them? I can’t wait to find out what happens next!

There’s no peace for this recently resurrected valkyrie. Asgard’s greatest enemy intends to claim both the realm of the gods and the realm of humans for himself, and with the army he’s amassed, the odds aren’t on our side.

Even worse? It turns out the gods aren’t so immortal after all. If this power-hungry giant gets his way, my four new lovers will lose not just their home but their lives as well.

As we gather more gods to join the fight, old tensions flare up. I’m starting to think there isn’t strength in numbers, only a whole lot of arguing. How can I help save the realms when the divine newcomers see me as nothing more than a servant of Valhalla?

In this final battle, we either win or lose everything. But I’m Aria Watson, and I’ll die all over again before I let a giant destroy both my worlds.

Final battle to reclaim Asgard and save Midgard from Surt, the main villain in this series. Having only seven of them against the army of the undead, getting help from the other gods is a must. But, it doesn’t mean that things will run smoothly, especially when the newly joined gods look down on you and some of the original team members.

Odin’s cryptic clues make sense in this final book. Baldur, Hod, and Loki prove themselves worthy, but nothing new from Thor, the gentle giant with muscles. Meanwhile, Aria never bows down to those who are sceptical of her Valkyrie’s status, and she does us proud in the end with her initiative!

This book is action-packed with plenty of battle scenes, easy to read and imagine, and it comes with a very satisfying ending to the series. I’ll definitely be reading the next series from the same world if it comes up! Maybe make Huginn, the other Odin’s raven of memory, a minor villain. But, please make it longer this time. Possibly eight books or more 😆.