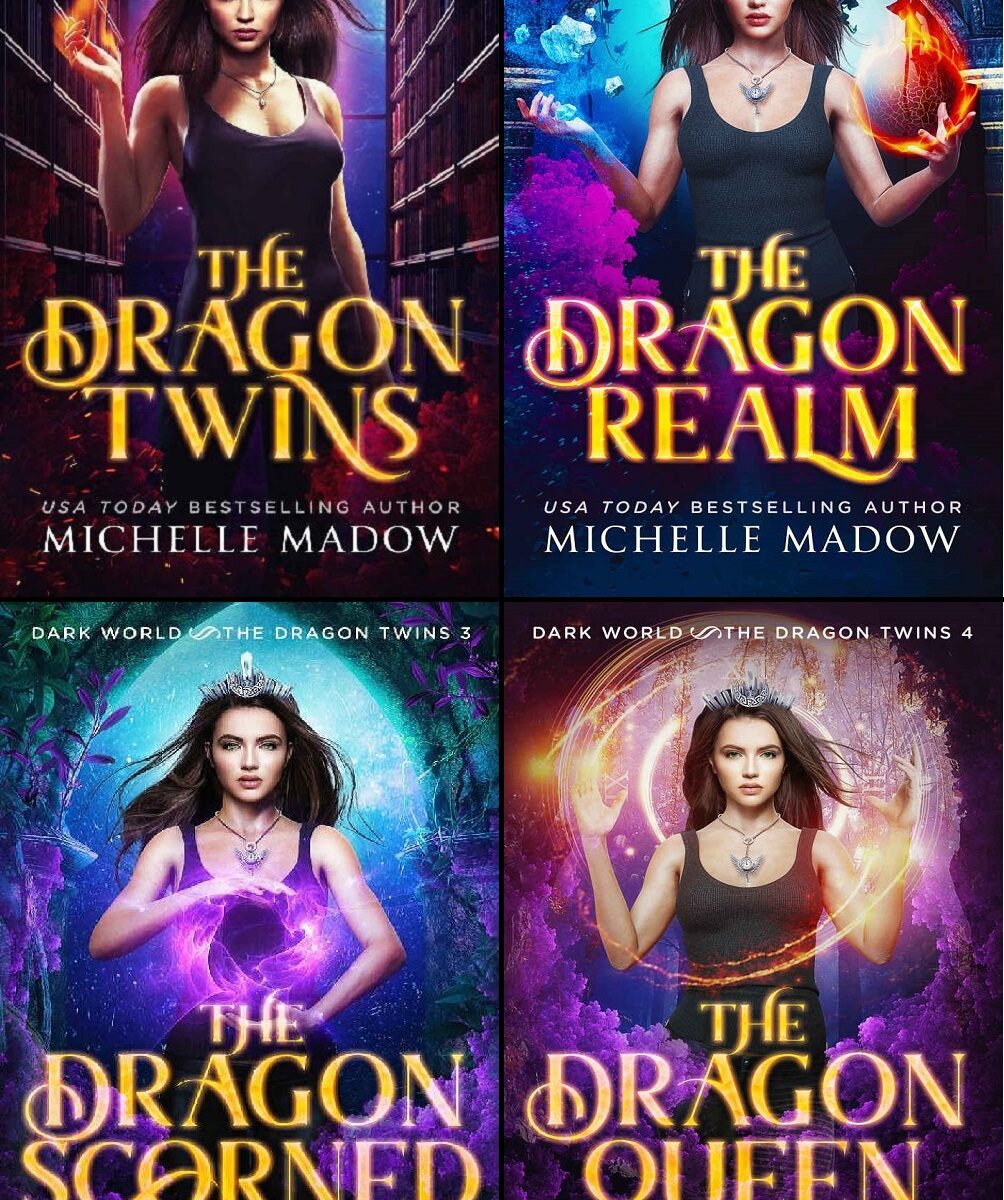 Season four of the Dark World universe. Who would be the queen of Pentacle, the fourth queen needed to defeat the demons? Gemma or Mira?

The Dragon Twins series is the last season in the Dark World Universe. It can also be read as a standalone series, as stated by Michelle in her Facebook post. But, to fully engross yourself in the story, I’ll recommend reading it accordingly, from season one to this series!

According to legend, twin sisters Gemma and Mira are descended from witches. But they’ve never been able to use magic.

On their seventeenth birthday, everything changes. They’re gifted with power over the elements, and right after receiving their magic, they’re tracked down and attacked by an ancient monster. They would have died, if not for Mira’s boyfriend Ethan showing up to save the day.

It turns out that Ethan has magic, too. He’s a dragon shifter from a dark realm, and he’s sworn to protect the twins from whoever’s hunting them down.

With monsters relentlessly chasing them, the three of them go on the run, pausing only to sleep—and to allow Ethan to teach them how to master their magic. But since they’re stuck together, Gemma has to try harder than ever to keep her deepest secret from her twin—she’s been in love with Mira’s boyfriend for months. Sometimes, she swears Ethan feels the same.

But Gemma’s feelings for Ethan should be the last thing on her mind, because whoever’s hunting them has dark magic so impossibly strong that even the most powerful supernaturals are running scared. With nowhere left to hide and time running out, the twins race to discover the truth behind their heritage so they can fight back—even if that means committing the ultimate act of betrayal: of each other.

The Dragon Twins series is season four of The Dark World universe, and some of the mysteries in this book, such as what happens to Ethan’s father or about Selena and the teams’ visit, have been revealed in season three, The Faerie Games Series.

Most chapters in this book are from Gemma’s point of view, and nothing from Mira, the other twin, and Harper only have one chapter. As of now, I like Gemma. She is confident and more assertive than Mira, who’s timid, childish and nasty? As for Ethan, he is just as mysterious.

So far, even though I enjoyed reading the story, I find this book isn’t up to the previous series’ standard. I’m also disappointed because this book is short, and we have yet to hear about Torrence and Reed. I hope when they venture out to Ember realm, we’ll get to read about them!

After killing the dark supernatural who could sense their rare elemental abilities, twin sisters Gemma and Mira are no longer being tracked every time they use their magic. But they can’t let their guard down yet. They’re still being hunted by the strongest demon on Earth—Lilith.

Kill Lilith before she gets to them.

To do that, they need to locate the Holy Crown of legend. There’s just one problem: no one has seen it for over a thousand years. Once the Holy Crown is found, the mysterious fifth element can finally be unlocked—the element that’s the key to winning the war against the demons.

But finding the Holy Crown isn’t Gemma’s only problem. She’s still plagued by her memories of a love she and Ethan shared in another life. Given that Ethan’s dating Mira in this life, Gemma wants to get rid of her feelings for him. The best way to do that? Convince a witch to brew her a potion to erase her memories.

Because once she drinks the memory potion, her love for Ethan will be gone… forever.

Torrence was finally free from the trouble she got herself into, but the revelation about Selena was shocking, and I did not see that coming! That explained why she delayed in freeing her people in the Otherworld! As for who would be crowned as the queen of Pentacles, well, there’s no surprise, and I’m sure everyone got this right.

Story-wise, I have enjoyed the ride so far. I binged reading it from season one until now, and I see a significant improvement in writing style and story execution. So far, the story has been about racing with the demons’ team to collect the Holy/Unholy objects. Although, we didn’t know about the other team’s progress until now.

It has been a ride to remember since they let the Hell gate open. From collecting Demon’s tooth for entry in Avalon, fighting against Azazel, gaining Gods’ ability, and now, the threat against Lilith and one that would soon rise from the gifted vampires’ blood? Could it be Lucifer? What a  fascinating adventure we’ve had.

For one, demons are after her—demons that want to kill her.

Second, her sister Mira is missing. And demons are after her too.

She does have a few things going for her. One: she has magic. And two: she’s just been crowned Queen of Pentacles—by her soulmate Ethan. As queen, she’s been gifted a new kind of magic—magic over the fifth element: time.

So while she can solve her problems in the present, she can travel back to the past. Which gives her the power to change everything.

That was an extraordinary ability bestowed to our Pentacles Queen! What would I do if I could travel back in time? Tho, Gemma used it wisely, and in this book, we finally got the answer to the double timelines, and the whole things were confusing and messy!

I have no further comment on how fantastic this Dark World universe stories have been so far, but continue reading the next and final book. I hope the conclusion does not disappoint! By the way, I guessed the big cheese correctly!

The final battle is here.

Prepare yourself for a mind-bending adventure full of magic, romance, and twists you’ll never see coming.

Gemma and her soulmate Ethan have remembered the true past they shared together. So everything in her life should be perfect. Right?

Wrong. Gemma’s worst nightmare has come true. Her twin sister Mira has gone dark and joined forces with Lilith and the demons.

Gemma has already learned the hard way that she can’t use her time travel magic to save her sister. But she can use it to help defeat the demons.

The best way to do that? Find the only Dark Weapon the demons don’t have yet—the Dark Sword—and use it against them.

But the Dark Sword is lost in time—over a century in time, to be exact. Now, it’s up to Gemma to find it and bring it to the present before Mira can get it first. And if Mira does find it first, Gemma will have to do everything she can to steal it from her, even if it means committing the ultimate act of betrayal: turning on her twin once and for all.

This book marks the end of the Dark World universe story. I will miss the characters for sure because of the incredible world-building that have Angel, werewolves, witches, mages, fairies, Roman gods, vampires and demons in the stories, which is fantastic! But, the wrap up seems to be short and rushed, given that I finished reading it in one sitting – less than three-hour.

Michelle could have made the story longer by throwing in contents like Hypatia and Tarren’s reaction to the sacrifice he’d made, which Gemma had promised to tell. Also, I thought Torrence’s dad was in Ember? I fancy reading some reunion before she killed them all! Nevertheless, it’s still action-packed and full of an adventure book, and before I say my final goodbye to this series, I would like to send a letter to Ethan.