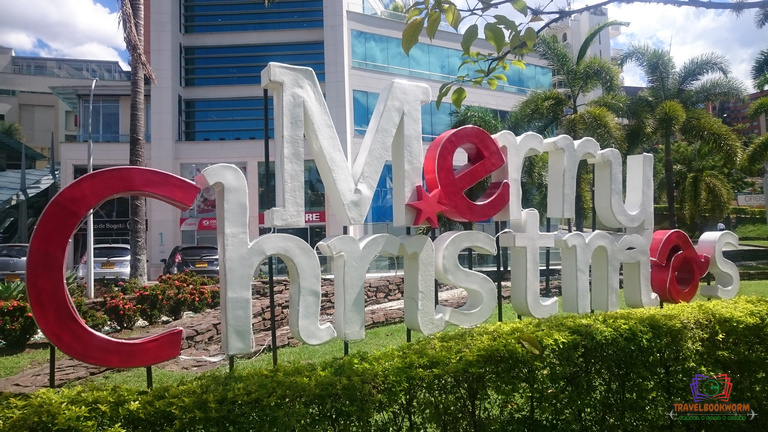 The queue to the check-in was already long when we arrived at the airport, and it was the first time we missed our flight in Colombia. However, since we’re flying with Avianca, it wasn’t a problem; they immediately arranged for us to fly with the next available flight at 2:40 pm for free of charge.

When we were here in Medellin earlier this year, the new tunnel wasn’t open yet. This tunnel had made the journey to San Diego much faster. However, it also made me felt claustrophobic as it took about 10 minutes before we’re out of the tunnel.

The bus cost was the same as before, 10,000COP. It was easy to get a taxi to Sixtina Plaza, our hotel for the day. The taxi cost 17,800COP from where the bus dropped us at San Diego station to the hotel.

The hotel facilities include a sauna and steam room on the 6th floor, and while Mike went upstairs to use it, I unpacked our backpacks and tried to work out how to turn on the Aircondition. It turned out, the reception controlled it, and she had forgotten to turn it on when she checked us in.

If only our room only has one double bed, it would be much comfortable to walk around. However, it only left us space to walk to the door with the extra single bed next to our bed. The mini bar in the room also stocked up with beers and other drinks and crisps, nuts, and toiletries.

On the first night we arrived in this hotel, I went up, and it was a bit creepy because I was alone, and it wasn’t until I was back in the room that I checked the pictures. One picture scared the shit out of me, and I didn’t dare going up there anymore. Maybe it was just my eyes playing a trick because I saw a blue face looking up to me 😨.

The rooftop view was fantastic, overlooking almost a clear picture of the city at 360 degrees. During this festive season, I could see colourful light all over the city. Moving around on the roof was a bit of challenge, the water tank blocked part of the view and to get over the other side, I had to navigate in the dark over the pipes lined up on the floor.

Trev accompanied us throughout our holiday here in Medellin. He arrived on the 26th of December in Medellin after his long flight from the UK and stop off in Miami. With guide mode activated, we took Trev over to several places, which we had visited earlier this year, as well as new places.

When we visited Communa 13 early this year, we didn’t get to ride the cable car to the Parque Arvi National Park. This time, we took the cable car, and I thoroughly enjoyed the view overlooking the neighbourhood.

Trev wasn’t a fan of the cable car, though; he felt claustrophobic 😁. Hence, once we spent a few minutes there, we took a taxi back.

We went to this restaurant twice during our stay. It wasn’t far, just a few blocks away from the hotel. They have fresh roast chicken, but it was weird that they didn’t freshly make the salad, but in packaging.

This little restaurant which located a few blocks away from Parque de El Poblado served excellent food. The owner was attentive, and he spoke little English, which was fine.

The set meals come with drinks and soup served in a small pot. Mike and Treve had lentils soup, while I chose the Arracacha and the main meal with Pechuga and Cerdo. The meals cost 61,000COP.

Party zone area with many bars, nightclubs and restaurants around. It comes alive at night and a favourite partying place for foreigners. Trev had never been here before, so we took the opportunity to show him around.

Note: The journey back by taxi cost 14,000COP to the place we’re staying.

We went to this place twice throughout our stay. The first time we’re here, we ordered meals, mine was alright, but Trev’s fish was undercooked, and we sent it back to have it properly cook.

The second time, while we sat drinking in this bar, we’re approached by a lady selling Big ass ants, and for curiosity sake, we bought one packet of it, which cost 40,000COP. It tasted weird, and Mike said it had an aftertaste of the sweaty sock 😂.

Almost all the bars in this zone showed a football match; no exception for Patrick Irish Bar. At first, we sat inside to watch a football match on the telly, but we moved to sit outside after the game finished.

It was quite dark inside with mouldy smelt, and we prefered to sit outside, watching the world goes by. However, we’re often asked for money by touts and beggars, so if you disliked being disturb, stay inside.

Earlier this year, when we visited this place, they only serve bottled beers, and things hadn’t changed since. I also remembered the Singapore restaurant next to this bar, but sadly, they already ceased operation.

Trev also bought a new vaper from the shop next door that’s offering a clearance sale. But it didn’t come with battery, and we had to get it from Unicentro, the next day.

Located at The Charlee Hotel, this upscale bar has a dress code after 7 pm. It was still early when we arrived, so it wasn’t necessary to dress up, but with shorts and shirts, while the others were wearing a nice outfit, we still felt underdressed.

When we were there, they only opened the section in the pool area, and there weren’t many good seats available. I didn’t find the view fantastic; it’s just like any view you get from Medellin’s high rise. Unlike the rooftop bar in Bangkok – the Banyan Tree, Envy bar wasn’t that high, and it was also almost felt like in enclosed space with the high glass walls.

However, if you didn’t mind the relatively high pricing on the food and drinks and you didn’t live in a tall building with a rooftop view over Medellin city, then, welcome to Envy bar, a place where you could look down at people (from the higher ground) and watch the sunset 😉.

A typical Colombian party place. This place was busy from afternoon until night time. The best part was the drinks prices were lower compared to El Lleras.

While we’re here, we went to Bodega de Licores for drinks and watched football matches – Man United against Burnley. After that, we went over to La Parranda of 70, a slightly happening place during nighttime, which we almost couldn’t get a table.

The young man who drove us back from this area told us that he could take us to Santa Fe tomorrow, and we accepted his offer since the price he asked wasn’t much different than what we found online.