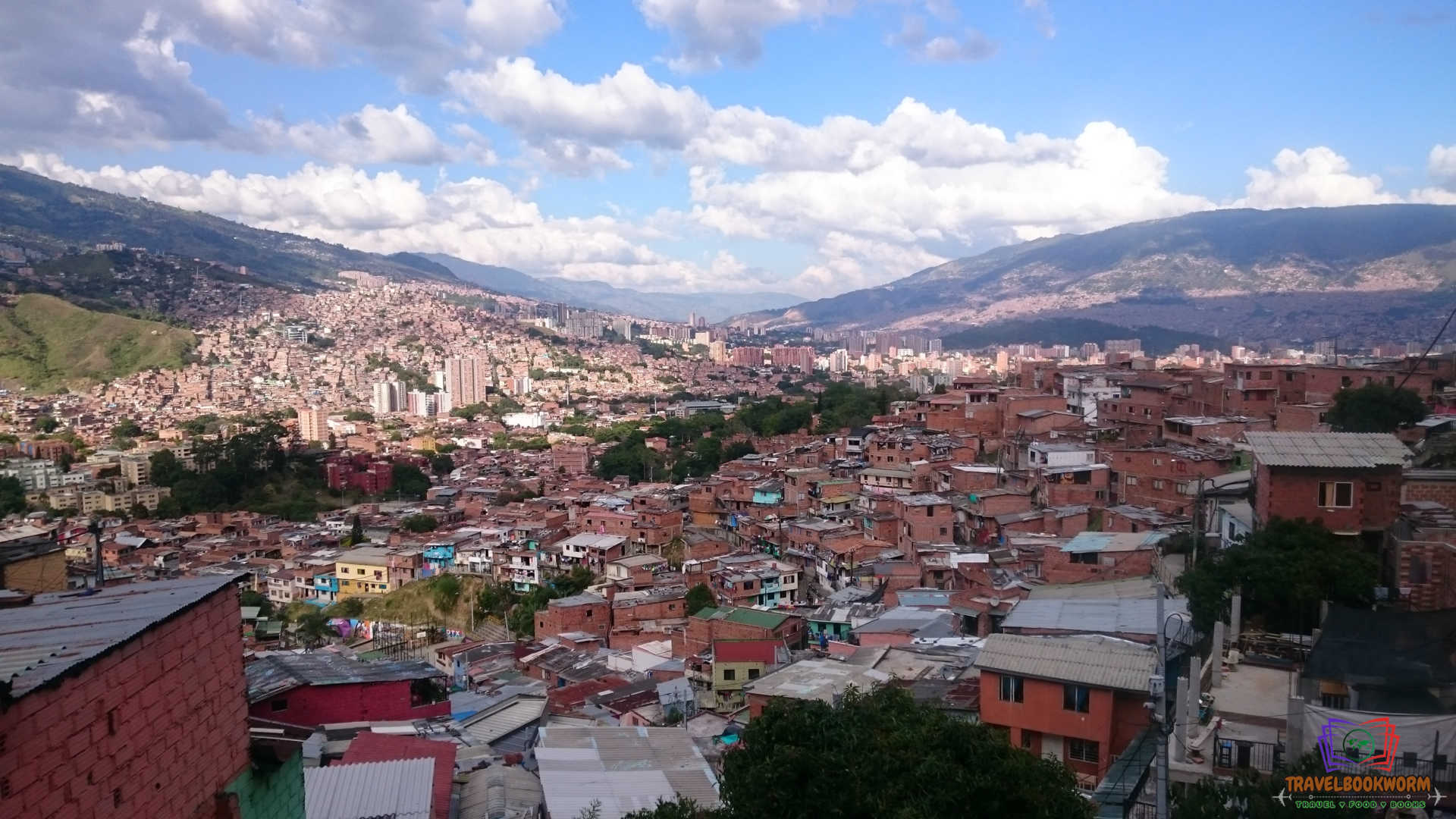 This place was once known for drug cartels, gang violence and police often raid this area. No tourist dare to set foot in this place. However, now that this place is safe, with the story, graffitis and street art performances, it’s enough to attract people from all around the world to come visiting this place.

Yesterday when we arrived in Medellin, only then we booked this tour online. Most of the walking tour listed on the website required at least two days booking in advance. But we managed to find one that allowed us to book it a day before, a company name World Lion Tour.

When we arrived at San Javier station, we went to the entrance to meet up with the tour guide. After introducing ourselves to Leandro, our tour guide who wore a red shirt and cap, he told us to wait on the side while waiting for the others to arrive.

The tour only started at 2:10 pm, and if I not mistaken, our group was about twenty peoples. We walked to the bus stop located behind the metro station. It didn’t look like a bus stand to me, but peoples were standing on the roadside, and some buses parked there. Leandro made some arrangement with the public bus driver to take just the people from our group. The bus fare was 1,200 COP per person.

During the tour which was about two hours thirty minutes, Leandro told us stories of the urban Guerrillas and how the transformation happened, and it’s all thanks to the art and hip hop. Whenever we reached some special graffitis, he would tell us the meaning behind it. The most popular one was by Chota 13.

Our tour guide also treated us with local ice-cream and had us chose the flavour. The choice selection was coconut, Soursop, Mango, Passion fruit, Coffee etc. I chose Mango, and it was delicious and refreshing.

It was hard work to sell or get something from the town before they have these escalators installed. In what used to be 25 minutes walking up the hill, these escalators allowed us to reach the top of 384 meters steep hill in only six minutes.

I couldn’t remember much on the story that Leandro had told us, but what I remembered was that the two most important military operations were Mariscal and Orión.

During the Mariscal operation in 21st May 2002, the death total was nine with many more was injured, and three out of the nine innocent civilians was underage. During the shooting, a mother realised that her sons were injured, and she decided to use the white bed sheet and waved through the window asked to be out as she needed to take her kids to the hospital. Her neighbours saw what she did, and supported her by doing the same. In less than thirty minutes the whole neighbourhood was covered with white flags, and that’s how the Mariscal operation gradually terminated.

On 16th October the same year, Operation Orion, which was the last and largest military intervention with more than 1,500 officers, two helicopters and one tank brought to wipe out the rebels of FARC and ELN believed to be hiding in Comuna 13. Besides the official officers, there’s also hooded men ‘helping’ out the officer by pointing out houses to be searched. This three days operation ended the guerillas, but not without casualties. Ten rebels, two soldiers, one police officer and three civilians killed, and more than two hundred wounded in this mission.

But that’s not the end of the terror, during the Operation Orion, the Paramilitaries had helped to fight in the mission, and when it’s over, they took control of Comuna 13. The next two years, they judged illegally and placing the civilians on trial, accused them of helping the Guerillas when they were still in charge, and those who were found guilty sentenced to death.

The view overlooking the city was marvellous. The houses painted in a bright colour, and we could see the sea of jungle stone that looked endless. But it was a different story from the other angle of this area where the locals called it “La Escombrera“. A mass grave to more than two hundred people who mysteriously disappeared and allegedly buried in this place. Believed to be the victims during the Paramilitaries were in controlled.

Leandro offered everyone in the group to go to his house and afterwards to the bar when the tour finished. However, Mike and I were too hungry as we didn’t have any lunch before joining the tour. We declined the offer, and before leaving him and the group, we gave him some money thanking him for conducting this meaningful tour.

Those who are interested in taking this tour can contact Leandro directly in his mobile, email him or book it online.

The tour is available in two languages, Spanish and English. While Leandro converses in English, his wife conducts the tour in Spanish. (in a separate way.)