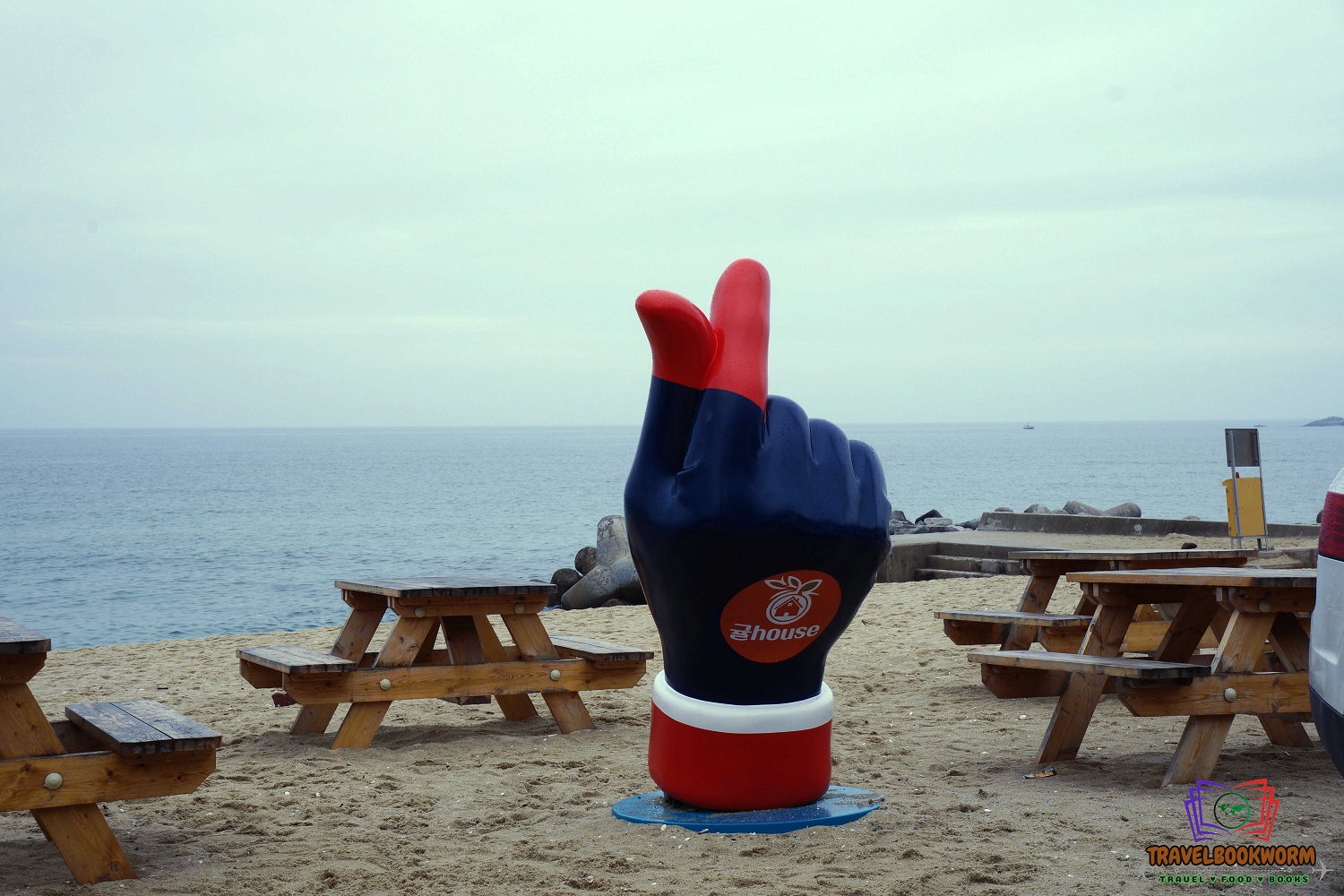 On our last trip here in Korea, we explored Gangneung, the city in the province of Gangwon-do, on the east coast of South Korea. We have been living in Korea for almost two years now, and yet we never travelled by bus, so on this trip, we gave it a go.

Mike booked the bus ticket online from Kobus, and when we got to the bus station, we went up to the first floor, printed out the ticket from the Kiosk machine and get on the bus.

How to get to Dong Seoul Bus Terminal:
Take Subway Line 2 to Gangbyeon Station Exit 4, and cross the road.

Upon entering the bus, we scanned our tickets, and the information showed up on the screen. It’s very convenient for the bus conductor, as he didn’t have to check on every passenger.

The seat can be seated comfortably for a long leg person as it has plenty of legroom. There’s also a USB slot for charging your phone in each seat. The whole ride was two hours and fifty-seven minutes including fifteen minutes break. I love watching the trees throughout the journey, the colour of the fresh new leaves intermittent with the much greener one made a spectacular view.

We took a taxi from the taxi stand next to the Gangneung bus terminal to Isabel Motel. It’s about fifteen minutes ride. The check-in was a breeze, Mike just showed her his ARC, and she gave us the room key without asking for any deposit or getting a copy of the ID.

We went for a late lunch at Music BBQ. It’s a camping style self-service bbq place. They sell meats, kimchi, side dishes, sauce, drinks, noodles, rice, and others. Place whatever you need in the provided basket and pay at the counter. They will then ask your preference to bbq inside or outside and help to start the fire.

We opted for a bbq outside, overlooking the sea in a ready-made canopy that can accommodate up to eight people. There were chopped wood and pine cones neatly placed in a basket ready to be used in every canopy.

Later that night, we went to a Chimaek place for dinner.

The next day, we walked on the boardwalk along Gyeongpo beach.  We could see people picnicking, jet skiing, playing kite, dating, and paragliding.

This dog has been wandering around the beach. Not sure where the owner, I hope he’s not lost.

We had early lunch at one of the many seafood restaurants along the road – Gyeongpo Hanmmi Hoejip. This restaurant open 24 hours during summer (Jun-Aug), and from 9 am – 12 am during the other season. We ordered spicy seafood stew, though it’s written ‘small’ in the menu, it’s more than enough for two people.

I like the plum wine it’s so refreshing and delicious.

From Gyeongpo Beach, we strolled down to Gangmun beach. It took us about fifteen minutes’ walk with occasionally stopped by admiring the scenery and gawking at interesting things such as this one. It looks like an alien to me.

For a view over Gangmun Beach, we went to Cucci Grill Bar & Burger located on the fourth floor.  The view was fantastic, and the burger that we had was lovely.

We had Chimaek for dinner. It’s 16,000won for a half-half flavour. While having our meal, we often see a taxi drove past advertising about Gangneung being a Pine city, and we agreed with it, we did see plenty of Pine trees there.

The name to this lake means “clear as a mirror”, and it’s a famous destination site for migratory birds.

The next morning, we walked about 500 metres away from the hotel to look for a taxi. It’s quite hard to get one. When we get to the terminal, we had our brunch in one of the Korean restaurants. The bus departed on time at 11:20 am and reached Dong Seoul terminal at 1:47 pm (15 minutes break).

* Gangneung is famous for its sunrise view, however, in our three days, two nights stay, it was cloudy, so no chance to see it.