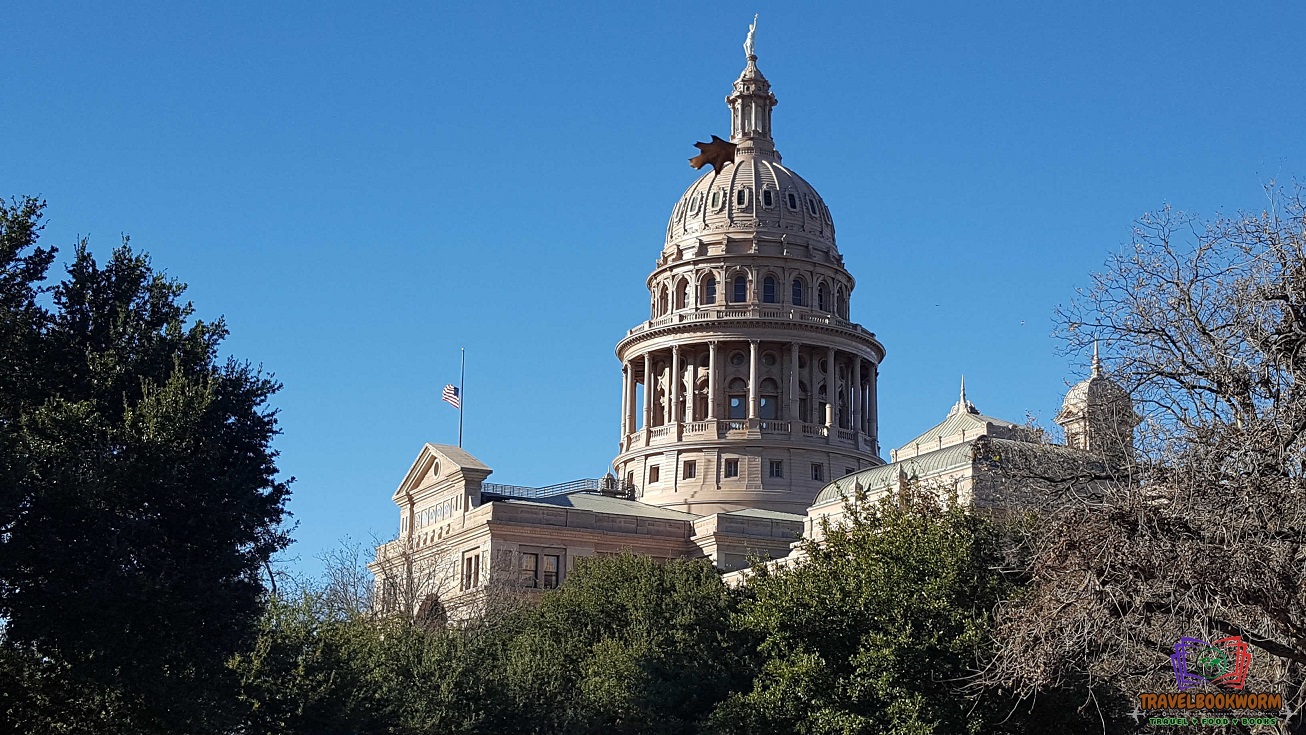 Austin, known as the “Live Music Capital of the World’ was the third place we visited during our course of the journey towards Dallas for Christmas celebration with families. The bus journey from San Antonio to Austin bus terminal only took 1 hour 36 minutes.

When we arrived at Austin bus terminal, getting our backpack was a bit of unpleasant experience. We witnessed a lady worker who was taking care of unloading the luggage from the bus rudely telling off the passengers to back off and get inside the terminal while she did her job. The outburst was unnecessary, and it just made her look like a mad person.

I find it quite challenging to get a taxi from the terminal, or maybe we just didn’t know where to find one. We stood at the roadside for a while before spotting a cab cruising at the busy road. It cost $10 for the ride to Rodeway Inn University/Downtown which was about 5.1 km away.

I’m a big fan of Supernatural drama (watched season 1-13, currently watching season 14), and staying in this hotel had made me think of Sam and Dean Winchester, how they regularly travelled across the states to save the world and stayed at a budget hotel such as one we’re staying here. Plus they’re both from Texas. Jensen Ackles (Dean) was born in Dallas, and Jared Padalecki (Sam) was born in San Antonio, and if I not mistaken, they’re both living in Austin now.

This hotel cost $150 for two nights with free breakfast. The breakfast was self-service, and it was pretty basic, served at the reception area. You could find pancake machine with ready-made batter on the side, simple pastries, coffee from machine and yoghurts.

The bed was comfortable, but the room definitely have seen a better day, and although the highway was just about 100 metres away, however, the noise coming out from the busy traffic outside was bearable. To prove the point, I recorded a short video of it.

In the afternoon, while on our way to 6th Street, we walked past Mike A. Myers Stadium & Soccer Field, and also Texas State Capitol. The distance was about 3.2km from the hotel, and it took us about 40 minutes walk.

While looking for a place to have late lunch, we wandered around to 7th street. The sight of homeless people sleeping on the walkaway and beggars around made me feel a bit uncomfortable. We didn’t find anything interesting in this road, so we walked back to the 6th street and settled for lunch/dinner at Cupabacra Cantina.

The bar has six television offering movies and sports programs. While we were there, Charlie & the Chocolate Factory was on, and I was happily watching it while sipping my Sangria. I first watched it over a decade ago, and until now I could still remember the storyline.

Once we finished watching the movie, we moved to Blind Pig Pub, located just across from the street, about one minute walk. At the entrance, the bouncer asked for our ID, and luckily I remembered to bring along my Cedula. It’s the first time we’re asked for it here in the US. But I think it’s not because of me and Mike looked young, but because of their policy. I bet they’d also check the ID for an old man with a walking stick. Anyway, this pub has live music, many choices of draft beers, but the beer was served in a plastic cup, and it cost $6, slightly expensive than other places considering the size of the cup.

Our next bar was the Dizzy Rooster. Choices of draught beer were limited, but they have plenty of canned and bottled beers. This premise has ATM Machines, a Photo Booth, and also has live music, but they were still setting up the musical instruments when we left.

Our last stop was Darwin’s Piano Bar, located on the same street just across from the previous bar. The bartender told us that he has three children with his Vietnamese wife, and it’s their 13th anniversary this year. He was very friendly and chatty and that had made us felt welcomed as well as comfortable sitting in the bar.

The bar also has a live band, and although they couldn’t play our requested song, they still tried their best to fulfil our request by substituting it with another song. We didn’t stay out late though, by 9:30 pm, we’re already back at the hotel. It cost $11 with a taxi for the journey of 4km. The price for Dos XX and Angry Orchard @ $12.

The next day, we had breakfast at the hotel and buffet lunch at the restaurant next door, Aster’s Ethiopian Restaurant. There were plenty of dishes to chose from, and it’s like economy rice back in Malaysia. It all looked very tempting, and I ended up trying every one of it.

It’s my first time trying out Ethiopian food, and I liked it. Some of the curries tasted like Indian food though. The owner/staff was attentive, and it almost felt like having a meal at home. The price for two buffet lunch was $21.63 including tax.

In the afternoon we went to Ann and Roy Butler Hike and Bike Trail, situated along the Colorado River. This walk was about 4km including a detour to the Mega Bus station – to make sure we know where to go for the bus ride tomorrow.

The trail with a river on the side, the greenery and squirrel oblivious to the passerby brought peaceful feeling while walking along the well-maintained path.

Walking back to the hotel, we stopped by for a drink at Royal Blue, and as for dinner, because we’re still full from the Ethiopian lunch, sausage buns from 7elevan was enough to sustain us until breakfast tomorrow morning.

It’s our last night in Austin, and after the 8km walk, we had an early night, not exhausted but just couldn’t be bothered with drinking and very excited to meet with the family in Dallas tomorrow.