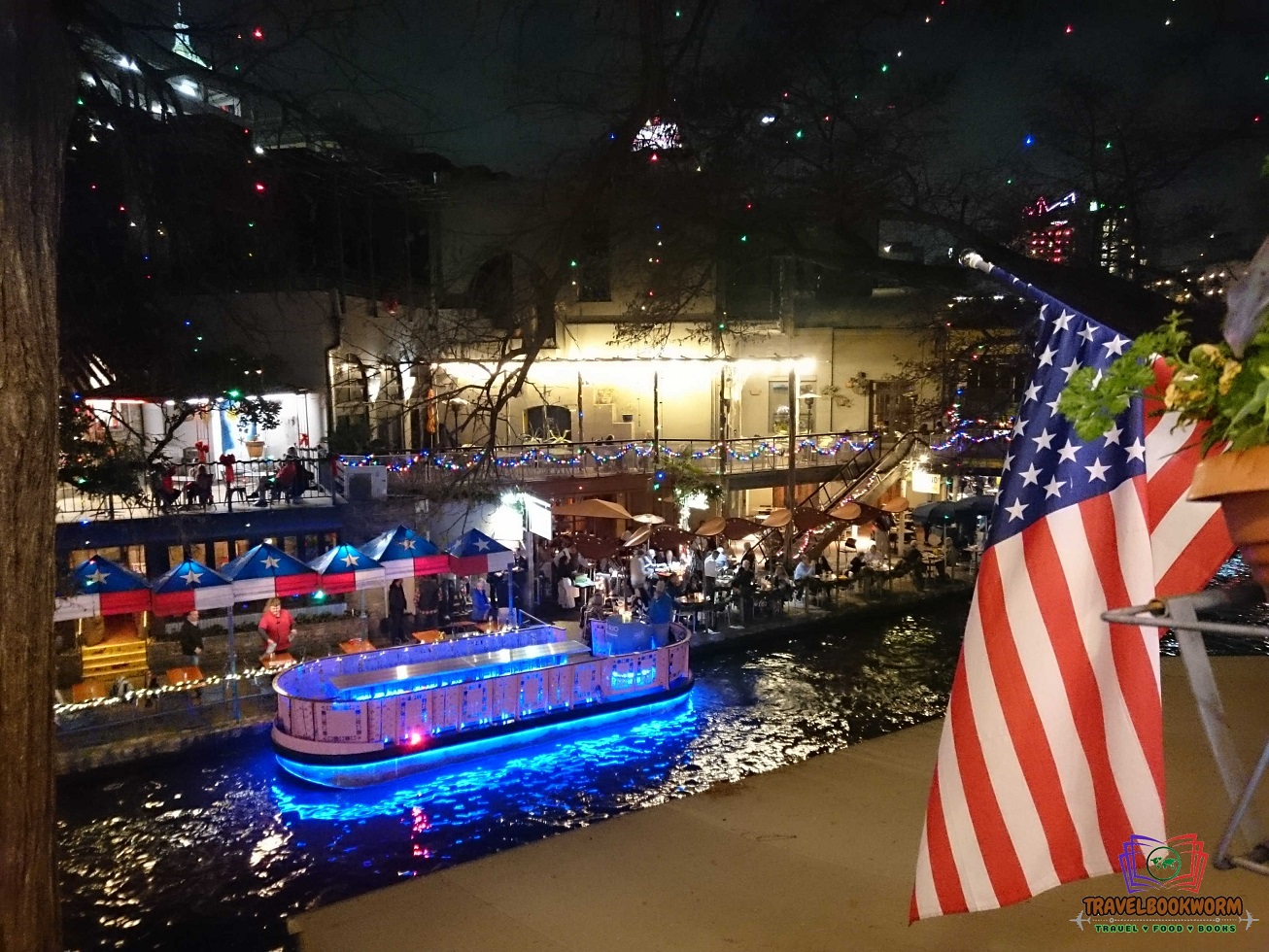 Travel story in San Antonio from the moment I left Houston. A short review on the hotel we’ve stayed for two nights in Red Roof+ and also eatery places such as in Mi Tierra Cafe and Riverwalk San Antonio area. Find out the food and drink prices at Lone Star Cafe, Club Sirius, The Ticket Sport Bar, Bier Garten, and also Dick’s Last Resort.

The walk for 17 minutes from Club Quarters Hotel to the Greyhound bus terminal in Houston has been pleasant, it wasn’t cold, and I could still see the autumn leaves hanging on the tree branches.

The station was small, and the seats were limited. Fifteen minutes before our bus schedule for departure, we queued at the gate. After twenty minutes had passed, there was an announcement made about the gate change, and everybody walked in a line to the opposite side of the entrance to get on the bus.

There’s a power outlet in every seat, free Wifi and also a toilet. No smoking and alcohol allowed on the bus. While on the journey to San Antonio, I saw that all the United States Flags were at half-staff and quickly realised that it’s to Honour George H.W. Bush, and according to the information on the net, it would remain that way until sunset on 30th December 2018.

When we reached our destination after travelling for 3 hours 10 minutes, I could see that even San Antonio shrouded by fog. We asked the taxi driver (an old man about 80 years old) who parked next to the terminal if he could take us to Red Roof+ Hotel, and he agreed even though it’s only for a short distance. The fare was $5.50. We saw the hotel on our way to the terminal, but we didn’t want to carry our backpack for a walk when we’re still not familiar with the road.

A breeze check-in and we got to our room. We tried using the safety box, but the door couldn’t be closed, and the technician tried to fix it twice but to no avail. We then moved to the opposite room, and everything was great, only slight problem with the room’s door. The room was spacious, facing motorway, have an iron & ironing board, hairdryer, little bathtub, and a comfy bed. It cost $147 for two nights.

The left picture below was our room’s view, and the right photo was our original room (with the broken safety box) – I wouldn’t want to look at the view at night! Just kidding though, the 13th Floor Haunted Houses was about 800 meters away, 9 minutes walking distance.

Later in the evening, we went for a walk at the famous Riverwalk. It was beautiful at night time when all the neon lights came alive.

While sitting at the Lone Star Cafe, we watched the riverboats cruising along carrying passengers in it. Some were taking children in it, and they sang Christmas songs while cheerfully waving at the passerby and wishing them a Merry Christmas.

Some of the food and drinks menu and pricing at the Lone Star Cafe:

I love the view here on the terrace. The food was great, the waiter was attentive at first, but once you’d paid, and when you’re leaving, they didn’t even bother to look at you or say goodbye. The squirrel on the tree though was courteous enough to look at me in the eyes when I try to get its attention 🤣 We spent $57 for three beers, one margarita, one huge Pepsi and two burgers.

There’re just plenty of restaurants and bars along the Riverwalk to chose from, but we wanted to explore a different area that’s not so touristy, so we wandered away from the river, and ended up in The Ticket Sport Bar. It was quite empty, with just a few locals watching games on the big screens and two sexy servers on the bar counter. I had Austin Eastcider-Pineapple Cider and mike had Dos XX Lager.  It costs 6.50 each.

It was already late at night, and we were still walking around to find another bar, but couldn’t see any. We ended up walking back to the Riverwalk and stopped by at Bier Garten for a drink. I had Hoegaarden, and Mike had Alstadt Kolsch. Our server, Miles was friendly, and he immediately changed Mike’s beer when we told him that the beer tasted sour.

On our way back to the hotel, we stopped by at Club Sirius. I had Angry Orchard Cider, and Mike ordered Samuel Adams, but halfway filling in the glass, the barrel finished, and the server gave the half glass to Mike for free! The others beer on tap also had the same fate, and the only one available besides mine was the seasonal brew. He tried half a pint of it but didn’t quite like it; I loved mine though, it tasted like Somersby.

Once I finished my drink, which took me an hour for a glass of the cider, we walked back to the hotel. However, we spotted another drinking place and decided to try there. Ernie’s bar which located in The Crockett Hotel was quiet when we got there, only five peoples having their drinks. The server was a pretty lady about eight months pregnant. She told us that she has Japanese, Mexican and American blood. We also had a conversation with the guy who sat next to us and buying round for each other. It was a fun and enjoyable night.

The next morning we went to the Market Square. We didn’t know the place well yet, so we decided to get the bus. The bus stand was about 100 metres away from the hotel, and the bus fare for the two of us was $3.70.

It took about 17 minutes journey to the market, and about a short walking distance to Mi Tierra Cafe, a Tex-Mex restaurant recommended by Mike’s aunt, Lona. This restaurant has been around since 1941, and it’s one of the favourites restaurants among San Antonio Residents.

The decoration in the restaurant was eye-catching, the wall and windows panel painted with bright drawing and looks very pretty. I’ve never been to such a beautiful restaurant before, and I believe that they will decorate it according to the seasons or celebration.

The waitress was attentive, and the food we ordered was lovely and very filling. There’s also a freelance musician who will play a song when requested by customers – chargeable per song.

Some of Tierra Cafe y Panaderia Food and Drinks Prices:

Finished with our brunch, we walked around Market Square. There’s plenty of beautiful souvenirs, decorations, wood carvings etc. can be found in this market, and while walking around, we often heard the sales pitch, the discount only for today, buy two get one free etc. It was tempting, but in the end, we didn’t get anything. Walking back to the hotel wasn’t difficult, just straight down the road, and it took about 25 minutes.

Back to the hotel, there’s a Jeeper Creepers movies marathon on the TV, and while watching it, we booked our bus ticket online to Austin tomorrow.  In the evening, we walked over to the Big Hops Growler which was about 600 metres away from the hotel. The place was in an industrial area, a bit quiet to our liking.

Nevertheless, it’s still a great place for drinking while gathering with your friends, and also for sports or movies watching with the big screens on the wall. However, if you’re looking for snacks, there weren’t any. What they have was beers and also interesting beer soap for sale at $10 each, and if you run out of cash, there’s an ATM inside the premises.

At night, we walked to the Riverwalk again, but this time we had dinner at Dick’s Last Resort. When we entered the place, a server greeted us with a rude tone, and during that time, I wasn’t aware of the restaurant’s concept until Mike told me about it. The worker was trying their best to be a dick, and they did their job well. I also loved the fact that while trying to stay rude, they didn’t force the customer to wear the ridiculous hat that they’ve made.

It’s my first time eating a Gator, and I find it tasted like chicken and also fish. Overall, I’ve so much fun in this place, and whenever the server tried acting rude to us, I just laugh it off. However, regarding the view overlooking the river, I much prefer the one in Lone Star Cafe.

While waiting for the bill, the server took Mike’s pint glass for wash and wrapped it before giving it back to us. Since then, the glass had been with us, travelling to another two countries before finally reached Colombia.

The next morning, we had our breakfast in La Panaderia Bakery Cafe, about 950metres away from the hotel. Walking and crossing over the road to the place was so easy because there’re not many cars on the streets.

Before heading back and checked out from the hotel, we stopped by the Alamo Museum to understand the history. However, we didn’t have time to go inside.

By 11 am, we started our walk to the Greyhound bus terminal. It was a windy day in San Antonio and also at the place we’re heading to, Austin, and according to the news, the condition would last until 6 pm today. Just before reaching the terminal, we saw this beautiful memorial in honour of the Vietnam Veterans.

Found this flyer in the hotel, it said that the food was Halal, but while looking at the menu, I saw Bacon and also Pepperoni in the menu, maybe it’s made from chicken right 🤔 ?

There’s also plenty of e-scooter here in San Antonio up for rent, and beautiful horse carriage for a romantic ride.