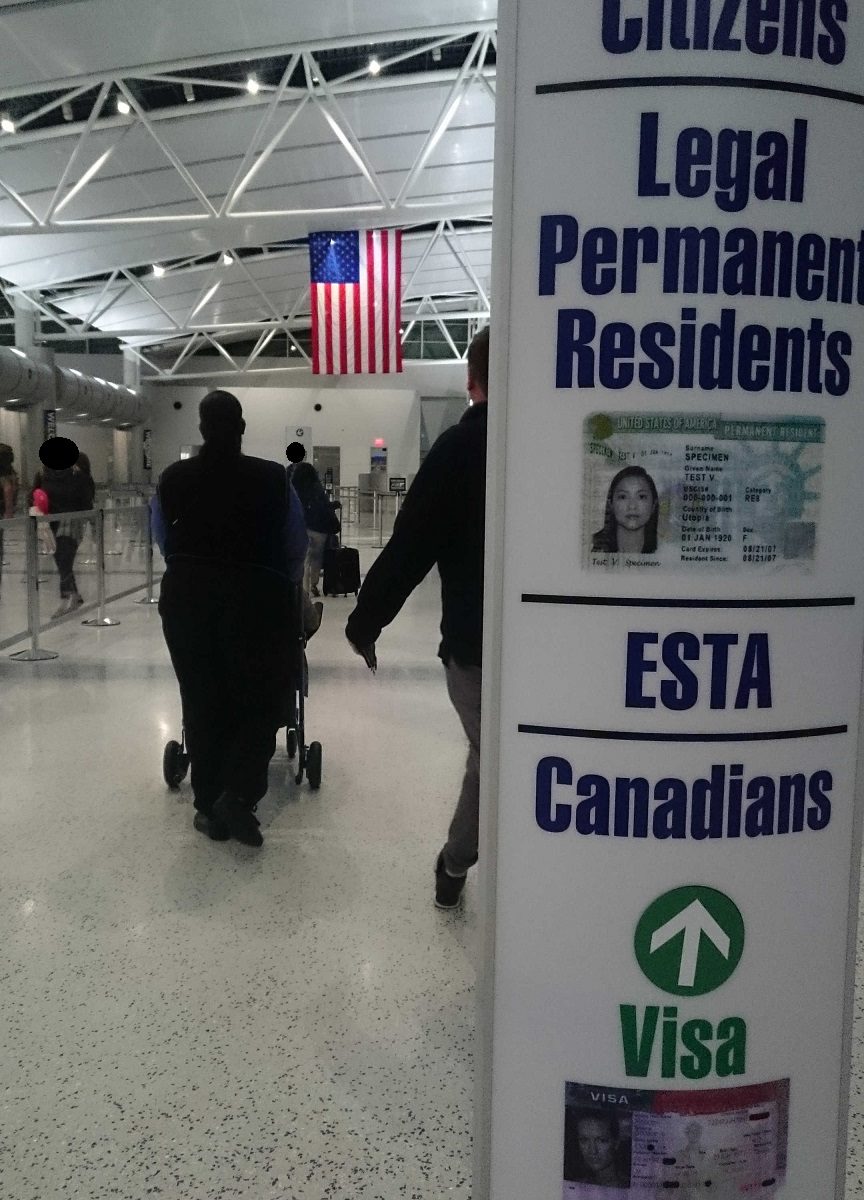 Living in South America has made travelling to the United States a one step closer. However, being a Malaysian, it’s still not possible to get there without a proper Visa. Luckily the process of getting a Visa isn’t complicated, and how fast you get it depending on your time schedule.

As for me, I got it in less than two weeks after I first applied for it online, then three months later, I flew down to Houston! But before getting on the story on my US trip, I’ll include my five steps and a brief story about the process of getting my Visa.

Getting a US Non-Immigrant Visa in 5 Steps

Step 1. Apply For a Nonimmigrant Visa

Make sure all the information is correct before submitting it, and if you have a weak memory, print it out or save a copy as a PDF because you won’t be able to return to this after you’ve done your step 2. I didn’t do it though, because I wasn’t aware of it until I’ve completed step 2. However, because I’ve answered all the questions truthfully, I wasn’t scared of giving a contradiction answer during the interview.

You will need to key-in your DS-160 confirmation number in some step, enter your passport return address, make a payment of USD160 and set up an appointment date for ASC (Photo & Fingerprint), and also for the consular interview. Both appointments cannot be made on the same day. If you didn’t attend the ASC appointment, you would be denied to go for the interview, and you will certainly waste the money you’ve paid.

I reached the building G at 11:05 am, and I could see that many people were queuing inside. I tried pushing the glass door to get inside, but it was locked. I stood at the door, and soon there’re others who queued behind me. In the instruction, it said that you didn’t have to arrive 15 minutes early. But the guard still let us in even before the appointment time.

The process was simple, they let me know which counter to go and I wait for my turn. The lady attended to me was friendly, she tried her best giving instruction in English to me. She asked my name and then she directed me to put my four fingers at once on the scanner, left and right and then both thumbs together. After that, she took my picture and also verified some information. She then placed a sticker at the back of my passport and let me know that it’s done. Before leaving the counter, she reminded me of my interview date.

My appointment was on 9th August 2018 at 10:30 am
Location: Calle 24 Bis No. 48-50, Bogota DC
The document I brought with me: DS-160 form, Current Passport, Mike’s work contract, Payment Receipt, Instruction, Old Passport, Marriage Certificate, Itinerary Plan, RBS Bank Statement, Cedula, and House Contract. (I prepared every possible paperwork, but the officer only sees 3 of the first-mentioned documents).

The next day, I went to the Consular appointment. I wasn’t sure about the traffic condition, so I leave an hour before my appointment time. It was drizzling when I reached there at 10 am, I didn’t bring an umbrella, and because it was still early, I wasn’t allowed to go in yet.

There were quite a number of us, and we weren’t allowed to stand near the properties’ gate; it’s for security reason they told us. We waited on the other side of the road until precisely at 10:30 am, they made an announcement, and we made a beeline to the gate — the security checked at our appointment time before letting us in. From the entrance, it was probably another 100 meters away from the checkpoint. Just like a security check at the airport, no belt is allowed, and you need to place your belonging at scanner machine.

The first stop was a document checking; they will help to amend any information that needed to be corrected, after that it was like queuing for the immigration clearance in the airport. As for the interview, it felt like a process of buying bus/train tickets because while I was standing on the outside, the interviewer sat on the other side of a see-thru window, and there’s a small opening for document exchange window.

During my visit, I waited for about 30 minutes before it was my turn. During the queuing, I get to watch other people’s reaction at the interview counter and noticed that most of the Colombians were given with an A4 size letter once they finished with the interview. I wasn’t sure what that means during that time until I got mine, and that’s when I realized that they’d failed.

My experience with the interviewer:

We exchanged greetings, and I placed my DS-160 form and passport in the small opening window. The interviewer took the documents, and when he saw my passport, he said: “Oh, Malaysian, what are you doing here in Colombia.” I told him that Mike works for the BC and I tagged along. I offered other information such as before coming to Colombia we lived in South Korea for two years.

He then asked how long we’ll be in Colombia, and I told him that Mike’s contract was indefinite, we can stay for how many years we wanted. I offered him Mike’s contract documents, and he looked at it, I even asked if he wanted to see our marriage certificate, but he said it was alright and that he trusted me. He then asked for the purpose of travel to the US, and I told him about celebrating Christmas with Mike’s family member. He didn’t ask me a further question, and I just stand there watching him typed something on the computer.

The interview only lasted about 4 minutes before he told me that my Visa approved and handed me a small piece of paper. I was surprised at how easy it was, and forgotten to ask about the Visa validity, and whether it’s also valid for a connecting flight in the US.

The afternoon after my successful interview, we immediately search for our flights and booked it even though we should’ve waited until I got my passport back as advised by the embassy. But we have no choice because the flight fare kept on increasing every hour!

On 13th August 2018, I received an email telling that my passport has been sent out to the DHL office that I’ve selected earlier when I filled in the DS-160 form, and immediately the next day I got another email telling that it was ready for collection.

One Night in Houston

Copa Airlines flight CM534 was the first flight we took on that day. During the checked in, they couldn’t print out our connecting flight tickets, and we have to get it at the next airport. The flight time from Bogota to Panama was about one hour fifty minutes.

During the takeoff, it was quite bumpy, but after we reached the cruising altitude, it was smooth, and the stewardess began serving us with a light meal. We couldn’t watch movies because of the short flight time, and settled for playing the game ‘Who wants to be a Millionaire.’

When we got to Panama, we still have an hour plus before our flight to Houston. We walked to the gate to get our flight tickets but since there’s no one at the counter we headed to the Copa club to use the lounge. The lounge provided guests with a simple light meal and beverages, no hot food served.

We left the place thirty minutes before our flight time and got our tickets printed out from the small counter opposite to the waiting area at the gate. Once we got our tickets, we went through a security check before we’re allowed to get inside the seating area. We sat for a while, and I watched the officer running the drug machine test, it was similar to the one I watched from the documentary about airport security.

The connecting flight United Airlines CM1933 departed on time. The flight time to Houston was four hours and twenty minutes, and we could watch movies on this flight. However, we didn’t know that we need to download the application before boarding the plane in order to use the in-flight entertainment.

Many of us complained about it, and because Christmas was just around the corner, they decided to let us watch the movies for free! But it’s only 6 or 8 movies if I remember it correctly, and they served drinks and a packet of crisp for free.

When we got to George Bush Intercontinental Airport, Mike went to the queuing line for Esta, and I went to the Visa immigration counter. Immigration’s ‘interrogation’ was easy. He just asked me what I’m doing in Houston, and I told him I’d be visiting my husband’s aunt in Dallas.

He then asked me where’s my husband, and I told him he was queuing at the Esta. In just a second Mike reached the other side of the counter I was standing, and I quickly pointed to Mike. The officer was surprised when he knew I married to a British guy; he even asked Mike to join the conversation.

He was friendly and I even jokingly told him what’s wrong with marrying a British guy, and he just laughed it off and wished us a happy trip! Meanwhile, Mike told me that the immigration officer that he got was strict and asked many questions. I guess I was lucky!

Settled with the immigration check, it was time to collect our luggage. This time, though, we have to wait for almost 30 minutes before our luggage arrived. While waiting for it, I checked on the bus schedule to downtown Houston and saw one at 8:19 pm.

The distance between this terminal to terminal C was about 400 meters, and when we reached the bus stand opposite the entrance to terminal C, there’s still about 10 minutes left before the scheduled time.

To take the bus, you need to have an exact change, because they won’t give you the balance. Our smallest amount was $5, and we thought of just giving away the $2.50 changes. However, the bus conductor was very kind-hearted, he gave us a free ride!

From the airport, it was 50 minutes ride to Milam St @ Rust station, and four minutes walk to Hotel Club Quarters. At 9:20 pm, we arrived at the hotel, the check-in process was smooth, and they asked for $50 for the deposit.

The hotel’s bed was comfy, with a big flat TV screen, an espresso machine, microwave, minibar, hairdryer, an iron and ironing board as well as Yoga mat. We spent one night at this lovely hotel.

At night we went out for a late dinner at the Flying Saucer located just around the corner from the hotel, about 2 minutes walk.

The next morning, Mike used the Gym facilities before we headed out for breakfast at Corner Bakery Cafe located 4 minutes walk from the hotel. I had Truffle hot chocolate @ $2.49 and Pistachio Cranberry Muffin @ $2.49 while Mike had a Cappuccino @ $3.49.

The fog had shrouded Houston’s skyscraper buildings, and I couldn’t see the top of it. There’s not many people and car around, and it was easy to cross over the road. I wonder if it’s a usual thing downtown or because of Christmas’s approaching and the workers back in their hometown.

By 11 am, we checked out from the hotel and walked to the bus station to catch our ride to San Antonio.