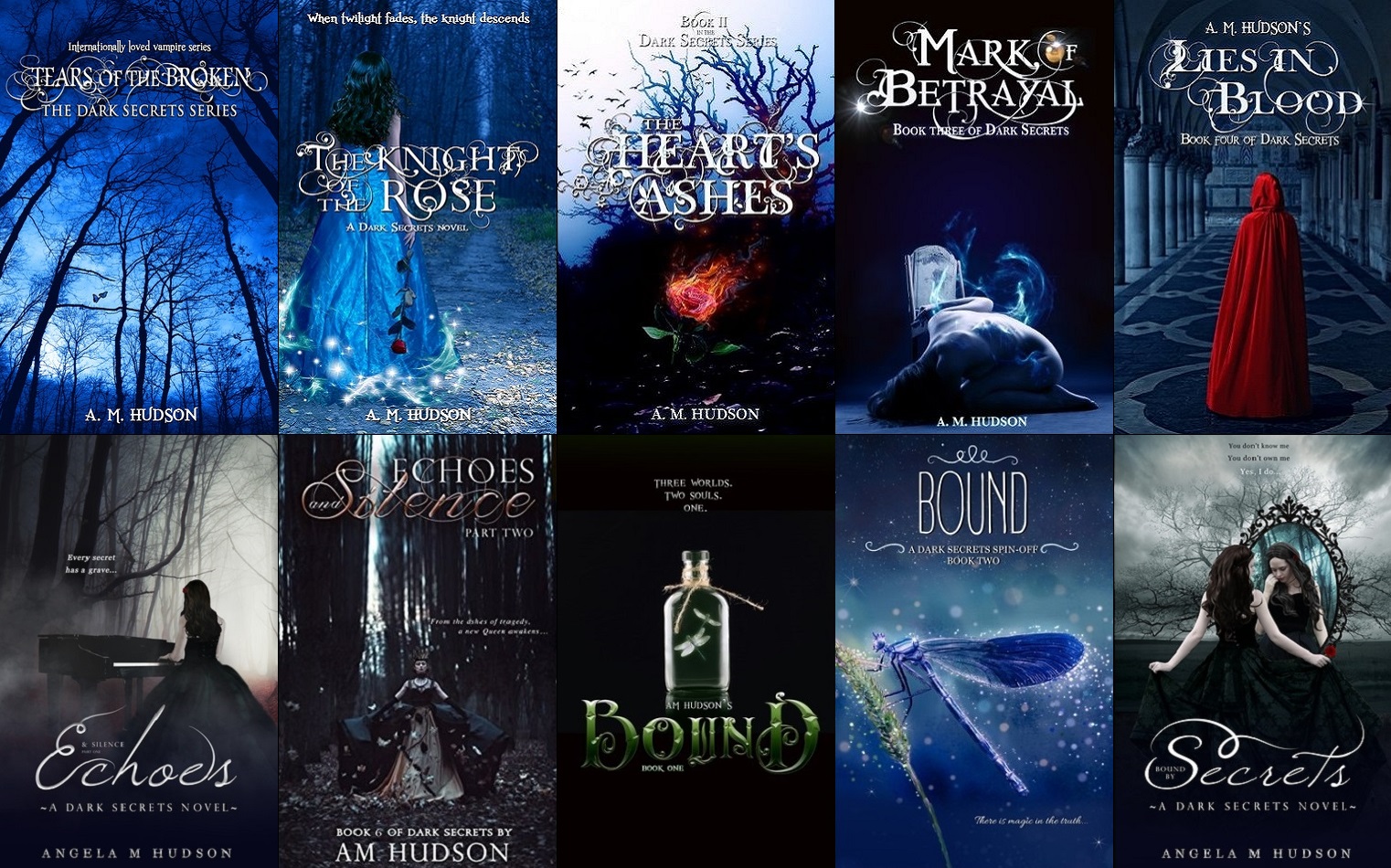 Tears of the Broken

Amara-Rose / Ara was stillborn but somehow magically came alive the minutes her father touched her. When Ara was 16, she survived a car crash that took her mother and little brother’s life. However, the accident left her physically, mentally, and emotionally scarred. Her father during that time was married to another woman with a son named Sam and living in the US.

Ara had no choice, but soon after the funeral, she moved out of Australia and lived with her father, leaving behind her BFF, Mike. Ara was was still depressed when she started going to school, but the devastatingly handsome David Knight helped her get through her day, and soon enough they became an item. Besides David, she also met Emily, and they became a good friend.

When Ara found out that David was leaving her, she kept on questioning what she did wrong, and eventually, David told her that he’s a Vampire. One way to be with him was to turn into one, but it wasn’t a guaranteed that she could be changed into one, depending on if she had the Vampire gene. Otherwise, she would die. Ara would need to tell him her decision during the last dance in a Masquerade Ball. Meanwhile, Mike came to visit her for a few weeks with a mission.

Mike was Ara’s first crush, but back in Australia, Ara didn’t get what she wanted (she didn’t give Mike a chance to explain) then the accident happened, and she moved away. Now that Mike proposed her, and with David still at the back of her mind, she couldn’t make up her decision, yet. David seemed to be letting go of her when he didn’t turn up at the ball for an answer. During the ball, David’s twin brother, Jason attacked Ara, and she was severely injured and hospitalised for months.

In book two, Ara was finally getting what she wanted, marrying Mike, but she realised it was a wrong choice and she ditched Mike on the altar! With the money she inherited from her mum, she moved away from her parent’s house and rented a place and lived with Emily.

However, Ara was struggling to cope without David by her side, regretting not agreeing to be turned to Vampire while David still asking. While living miserably, she met Eric, another Vampire that told her everything she wanted to know about the Vampire’s world.

Eric was her informer, and she was eager to find David’s whereabouts. Meeting Jason again after all that he did to her was a terrifying experience to her. But Ara was slowly getting close to him without knowing why.

When she finally found David again, they reconciled and began planning on her to change into a Vampire. But because Jason already bit her, and she didn’t turn into a Vampire, so it’s obvious she couldn’t become a Vampire.

However, there’s another being called Lilithian, who drinks Vampire blood instead of human blood, and they plan to give it a try. But with David being on the run from his Vampire community, the thing turned to the other way when they got caught on their wedding day.

In book three, the truth revealed. Ara was a pureblood Lilithian, and all the drama of changing her into one was unnecessary. She also accidentally turned Mike into a Lilithian and Mike became her head security when she appointed as a queen.

Meanwhile, David had to be on hiding, pretending that he was dead, and he took the opportunity to investigate where the Vampire King, Drake was hiding and also trying to find out Ara’s birth parents, as well as a hidden agenda on his own. Ara missed David so much, and besides learning all the political stuff, history and doing her duty as a queen, she discovered something significant that she took the measure on her hand to save David’s life.

I didn’t have the urge to read this book as fast as I did with book 1 & 2. But I still like the story though; it’s just that the political stuff bored me. I picked up the pace again when David returned because that’s when the exciting things happened. I couldn’t believe Ara almost did it with Arthur! Omg, that’s awful. Oh, and I think I know why Ara had a mood swing. Oh oh sorry David, please understand why Ara did that.

Book four was brutal to Ara. Jason did erase the memory of what happened between him and Ara. But when David found out what Ara had done, and worst still, Ara admitted that she loved Jason. David hated Ara so much that he maltreated her and both of them living separately kind of like divorce, but they couldn’t openly admit it on the public due to their reputation as a King and Queen.

When Ara was pregnant, David didn’t acknowledge the baby, and he just lashed out to Ara whenever he likes it. Throughout the ordeal, Ara grew closer to Jason, and Jason treated her so lovingly. Jason was also playing a significant role to discover what Ara’s ability and how to fix it.

I did guess the story’s direction, but what I didn’t expect was my loyalty shifted from David to Jason. I thought I was rooting for team DARA, but now I hated David so much that I wanted JARA! The author described every emotion very well that I could imagine the pain and suffering in each character. My heart goes with them.

When I finished with book five, I was sucked back into team Dara again! I was relieved to know that David didn’t purposely hate Ara so much that he couldn’t forgive her.

Oh, and it was so obvious that David was the impure and Jason was the good one from the way they both acted. Jason was just so sweet and caring.

By the way, I agreed with the solution on their unborn child, but it was weird considering Ara slept with Jason before, and funny to imagine him as a girl.

In what was supposed to be the last book, Silence book # 6, Ara had to find a way to save her unborn daughter, battled the evil witch, faced a betrayal from her ‘father’ before finally got what she longed for – A happy life with her loved one, living outside the Manor raising her family like a normal person.

However, I was still left wondering when I got into the last page about Elora’s soul mate (I think it would be Eric), and there’s still question about Jason’s welfare. After all that he’d been through, it would be cruel just to let him slide off without a proper happy ending!

I was so curious that when I finished reading this book, I immediately started reading book # 7 Bound by Secrets to find the answers. I was glad that I didn’t skip the introduction page because the author wrote an important note about the correct reading order. I would probably end up confused with the story if I proceed with it before reading Bound 1 & 2. I’m so thankful for that!

Bound tells a story about Ara and David’s daughter named Elora. Elora at the age of 16 spent her summer in Australia with Mike and Emily, she then fell in love with the country, moved in and worked at Mike’s cafe, befriended Ali, Bas and a few others.

She has been raised away from the Vampire and Lilithian world, not knowing her heritage and the only things she knew was that she could see ghosts and had been trying her best to help them cross over. It all changed when Eric accidentally gave his blood to heal Elora, she was then thrust into the world her parents desperately protected her from, but she loved the changes and was way more open to it compared to Ara.

When I first read the story, I find myself starting fresh by getting to know Elora’s personality, her circle of friends as well as the Aussie slang. But because I’ve read the dark secret series, the others revelation that’s coming didn’t surprise me anymore.

I was way more interested in finding out the welfare of the other characters from the previous book, especially Jason. But unfortunately, there’s nothing much about them in this book, and Jason’s name only surfaced at the end of the story. However, knowing that Elora’s heading back to the manor, and therefore will be meeting up with the old gangs, I can’t wait to start reading Bound 2.

Back to the Manor, there were so many changes happened in 20 years. The manor now was more organise and modern with a research centre, shops and university.

When Elora first arrived, it was with a mission to find her missing parents, but when things cleared up, and she didn’t need to launch a rescue mission. Elora spent the time mastering her power while catching up with her other family members.

However, what she didn’t expect was a betrayal from one that closes to her, and she had to stay strong to go through the painful moments.

I like what I learned in Bound 2, as expected, Elora was much better than Ara when deciding what she wants, and I love her determination as well as her personality. I’m also satisfied with the outcome in Jason’s story, it was an epic conclusion, and I’m glad that everyone has a happy ending.

In this last book of the Dark Secret Series – Bound by Secrets continued telling the story on Ara’s journey of recovery back to her former self.

This book alternating between David and Ara POV had made my emotions running like a roller coaster. At times when I read David’s part, I was so mad with Ara for being childish, and when it’s from Ara’s point, I felt like killing the mortal David.

The author did an excellent job tying up all the loose end, and I felt content knowing that in the end, they all get what they deserved. A happy life reunited with people that they’d lost with Aubrey’s talent! Wow, that just made me so happy.

I thought this series was fantastic; there were times while reading the books that I couldn’t put it down, anxiously reading it to find out what happened next. It captivated me from the very first book until the last, as every one of it keeps getting better and better.

When I first started reading the book, I thought it was similar to Twilight, then after a while, I started comparing it to Vampire Diaries, but then I quickly realised that it was heading to a completely different storyline. I also like the way the author excellently describes a scene and every emotion that I can easily picture myself going through the motions. This series was one of my favourites!

At the moment, I think I have had enough of Ara’s world, and I’m satisfied with her being with David that I don’t want to read the other spin-off series of 3 books telling a story about ‘What if’ Ara is with Jason. There’re also a few more books after that, such as In My blood, Heart of Darkness and Underworld.

However, who knows, maybe in future when I miss Angela M. Hudson’s world, I’ll come back to read those lovely books. But for the moment, I didn’t want to spoil the happiness and restart again to the point where we see Ara in her weakest moment of life.