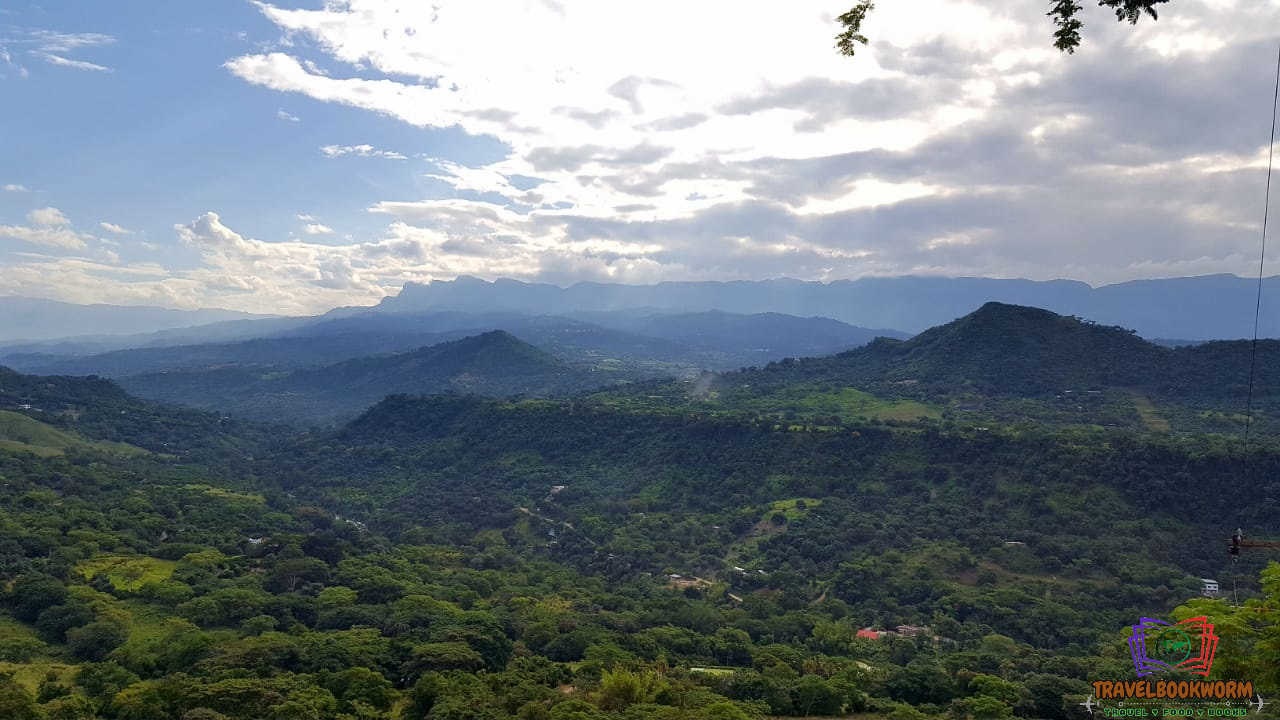 Before going away for the winter Christmas in the US, we went to a town about 90km away from Bogota. During our three days and two nights stay, the temperature was around 22°C ~ 33°C, perfect to feel like home (Malaysia). Anapoima is a beautiful little town with a population less than 12,000, and it’s clean, peaceful and safe – not dodgy.

Bogota to Anapoima by Bus

Our taxi fare to Terminal Salitre this time was the cheapest we’ve ever got – 13,000COP. He didn’t drop us in front of the terminal though, but on the other side that we needed to walk about 100 meters. We arrived at 10:10 am and went straight to Counter Flota San Vicente in Terminal two to get our ticket. There were many peoples in the terminal, but no one queuing at the counter where we bought the tickets.

Our bus scheduled for departure at 10:40 am. The ticket price was 15,000COP each. It didn’t depart on time, but it wasn’t bad this time, with only 5 minutes delayed. As usual, the bus stopping along the road looking for passengers to fill the bus. The traffic wasn’t bad during this time, but just after reaching the outskirt of Bogota, we stopped for almost 40 minutes because of an accident and also with the roads upgrade, the traffic was stopped alternating between the two ways. In total, we got stuck for almost an hour. We reached Anapoima at 2:20 pm.

During the journey, just after we’re free from the traffic accident, I tried the application in my phone: Altimeter, and it showed the altitude from 2,632 meters and slowly going down to 715 meters before reaching 691 meters above sea level when we reached Anapoima town.

When we got off the bus, we stopped for lunch at the nearby restaurant. While waiting for our food to be ready, I observed the yellow birds flying around, some pecking the grains on the floor. There were many of this species of bird here.

By the time they presented our meal, 30 minutes had passed. The Pechuga Ala Planca was delicious, and the portions were huge that we felt full for the rest of the day. The cost of the meals, Limonada and Morra Juice was 45,000COP.

Anapoima 1 hotel was excellent; our room was facing the swimming pool. The location was fantastic, and the breakfast was excellent. There’s a coffee tea making facilities at the seating area outside the room, but the water from the water machine taste funny – like soil.

The only downside was the lack of hot water for the shower, lack of socket to charge the phone – the single available outlet was in the bathroom, and the room was bright in the morning because of the glass door without a blind; it reminded me of our hotel room in San Franciso.

At night, we went for a walk to the square and the church. It’s only about 3 minutes walk from the hotel. The church – Santa Ana de Anapoima and the square were beautifully light up with neon lights.

There were many people around the square, while the adults were chatting with friends, little kids were playing around chasing a ball, and had their dog tied on a pole. The atmosphere was relaxing in this charming small town. Tired from the long journey, we didn’t stay up late that night, and by 6 pm, we’re already back to the hotel to rest.

The next morning before heading out for a walk, we had our breakfast at the hotel. We didn’t make any plan to go anywhere though; our original plan was to enjoy the hot sun and use the pool. But as we walked around the town, we stumbled into two paths for a nature walk.

The first trail – Camino Real Del Rio was beautiful, clean and exciting. We saw a poison dart frog; it was so tiny! Had it not been for Mike spotting it, I wouldn’t have been able to see it, let alone take this awesome picture. I might have even accidentally stepped on it.

The path’s distance being 1.2km, but it doesn’t feel that far. The walk was comfortable, well maintained with beautiful greenery.

Along the trail, there’re a few cement benches, and to kill our time, we sat on every one of it even though we didn’t feel tired. While sitting on the bench and listen to nature song, one particular bird catches my attention, I couldn’t see it though, but its chirping sounds like Duit, duit duit (Money, money, money – in Malay). It was funny!

At the end of the trail was a road that leading to a bridge, crossing over Bogota river. The water was foamy and smelled like detergent/ some chemical solution.

Back in town, we quench our thirst with Lulo juice while trying to figure out what to do next. And when we finally finished our drink, we decided to walk around and just by luck stumbled upon the 2nd trails.

This Camino Real Aguas Medicinales Santa Ana trail was a bit difficult to walk compared to the first trails. The stone came loose in most of the path making it hard to balance your step. The 1km track scattered with rubbish, but I can hear more birds/insect noise in this trail than the Camino Real Del Rio.

When we reached at the end of the trail, what greeted us was several dogs furiously barking at us. It was a bit scary because they came to us baring its teeth. We have no choice but to find some stones and throw at them quickly.

Shortly after that, the workers at the medicine pool helped us to shoo the dogs away. We went to see the pools which contain 25 minerals, but I think the pools have seen a better day! And because we didn’t bring our bathing suit, we couldn’t dip into the pool. I saw an advert about paying 2,000COP to use the pool though.

Walking back up to the town, we didn’t take the same trail; we followed the ‘main’ road. While walking on the route, we came across some workers doing the road upgrade, cementing it. There’s plenty of mango trees with its fruits fallen on the ground, some were ripe, and some were rotten. The course was further away by maybe 1km from the trail we walk earlier.

Stopped by for Lunch at Tres Carnes, but the worker forgot my order, and in the end, I just had a bowl of soup for lunch while Mike had his Pechuga Ala Plancha. The meals and drinks were 22,000COP.

We retired to our hotel after the meal, and when the heat was bearable, we went out for drinks. Our first stop was at the restaurant next to BBC Bodega. Here, the Club Colombia bottle beer was cheap, selling at only 2,500COP per bottle. 1,000COP cheaper compared to Girardot. I had two Redd’s, and Mike had four Club Colombia, and the total price was 15,000COP.

Moving on to another place called Cigarreria y Licoreria Anapoima & company. There, we paid for 33,000COP for 2 Empanadas, one Nectar aguardiente, four Club Colombia and two Redd’s.

While we sat there, a beagle came to the shop, and I was so happy to be able to stroke it. Rocky was his name as claimed by the lady who owned the shop. Rocky was so pleased when I scratched his back where he couldn’t reach, and soon enough he sat next to me demanding for more.

Our third stop was in a restaurant called Restaurante y Pescadaria. The beers price was a bit higher here, selling at 4,000COP per bottle, and our last place was at El Corralito. We ordered Double Carne Burgers, and 2 Club Colombia (Cans) and the price was 46,000COP.

The beers price was expensive the closer you are to the town square area. So if you want cheaper beers, stay away from the area.

Anapoima to Bogota by Bus

The next morning, we had our breakfast at the hotel then checked out about 10:15 am. The price for two nights booked via Agoda was 253,000COP, but we still need to pay taxes, and the final was 300,000COP.

We walked back to the area where we first arrived and saw another bus company. Expreso Del Sol has a nice office with a sitting area, and the ticket was also selling at the same price. The ticketing officer told us the next bus would be arriving in 20 minutes. While waiting for our bus, we saw two of the Flota San Vicente bus drove past. We regretted not taking the bus! When our ride finally arrived, it was already 11 am.

Besides stopping at La Mesa town for ages to get passengers, we also stuck for the road repair countless times, same as what we had experienced during the journey coming here.

Expreso Del Sol’s van was smaller than Flota San Vicente’s bus, but that doesn’t stop them from getting more passengers though. In front of the seat, where usually three passengers are housed including the driver, two extra passengers were lucky enough to get a seat at the makeshift cushion seat.

We reached terminal Salitre just before 3 pm. The queue for the taxi was long, and it took 20 minutes before getting our turn. The taxi driver drove the long way, going through La Candelaria area, and we ended up spending 40minutes on the journey.

However, he didn’t charge us a ridiculous price; the charges were only 20,000COP. Overall, this trip was fun, we loved the town, and we definitely will be back again in the future. (Maybe wait until they fixed the road though!)