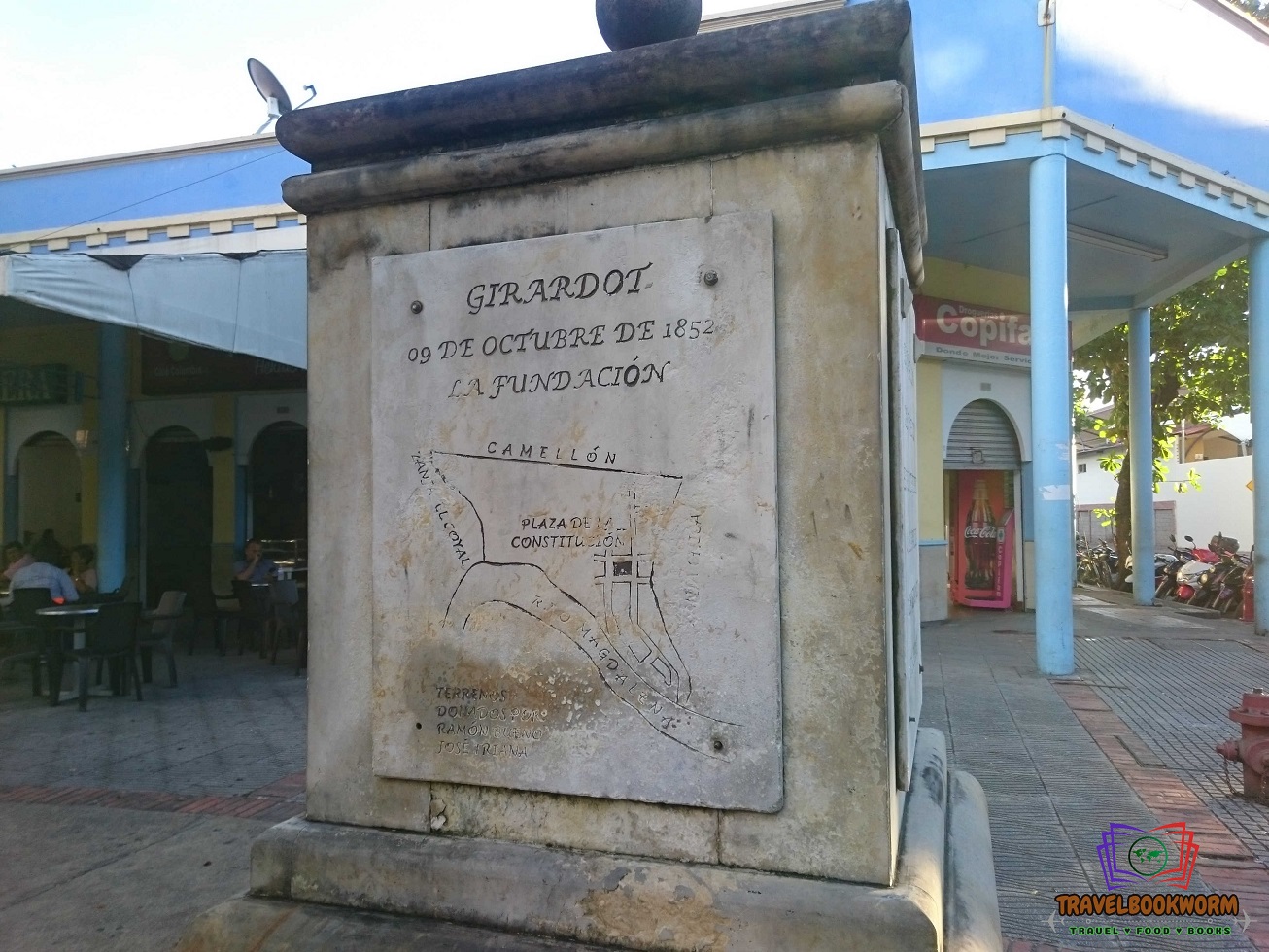 This town founded on 09th October 1852 and its name ‘Girardot’ was a tribute to the hero named Manuel Atanasio Girardot who died in the Battle of the Bárbula. The temperature during our stay was around 28ºC to 33ºC.

Last month Mike and I had a chance to travel a bit further away from Bogota for the warm weather, and also for my birthday vacation. It’s a town about 137km away from our home in Chapinero, Bogota.

Bogota to Girardot by Bus

Five days before travelling, we booked our bus ticket online from the website called Busbud. Another choice was to buy from Redbus website and travel on either 20paxs or 32paxs bus by Cootransfusa. But we thought about having more people on board would slow down the journey, so we chose 14 seats Eurovans from the company called Bolivariano.

The ticket price was 25,000COP per person, and having 11 departure time a day, we have the luxury to decide on which one suit us the best. In the end, we selected the departure time at 09:30 am and to get there by 12:30noon in Girardot.

It was still early when we arrived at the Salitre bus terminal with a taxi that cost 16,500COP from Chapinero. As usual, the taxi driver knew which terminal number to dropped us when we mentioned our destination being Girardot. Having the ticket printed out beforehand, we didn’t have to do anything but wait for our transport to arrive.

With an hour to kill, we walked over to the clinic and checked if we could have the yellow fever vaccine shot. It wasn’t busy, but we heard that you would have a little side effect after taking the vaccination, so we decided not to get it then, we wouldn’t want to ruin our holiday. But at least we know that Sunday morning would be the best time to go there.

By 09:30 am, people start queuing at the gate, and we joined in. But when we presented our tickets to the officer, we were denied boarding it. It was apparent that he couldn’t locate our booking from the way he searched the database on the computer, the logbook, and taking our tickets to the ticketing counter.

However, he didn’t tell us that, instead, he said the bus delayed to new schedule time at 10:00 am. I think it’s best to get the ticket directly from the counter instead of booking it online, provided it’s not a holiday weekend. Otherwise, it would still be hard to get one.

10:00 am sharp, we heard the announcement and made our way to the gate. The queue was long as there was a bus departing at the same time in the same gate. By the time we left the terminal, it was already 10:20 am. Near the terminal, there were plenty of Venezuelan refugee camps with the policeman guarding around the compound.

We sat at the front, next to the driver and all the way to the next terminal, the driver put the air-cond on, but when we reached Terminal Del Sur, he turned it off for the rest of our journey.

In Soacha, we stopped for a while where they took a video on every one of the passengers on board, and before arriving at our destination, we stopped at Melgar bus terminal and dropped off some passengers. Each stop was not more than 15 minutes though, and the total travelling time was 3 hours 12 minutes (not including the stopping time).

From Girardot terminal, we walked about 15 minutes to Hotel Republicano. The hotel where we stayed for two nights that cost around 434.000COP. Before checking in the hotel, we stopped for lunch at a bar-restaurant located next to Club De Billares Monte Carlo in Calle 16.

The set meal cost 25.000COP with additional two cans of coke, roughly the same price as in Bogota. While we sat there under the mango tree, a mango fell right in front of us. We picked it up, put it in our bag and took it back with us.

The room wasn’t soundproofed, and it was quite noisy during our stay. As early as 6:30 am, we heard a siren wailing nearby and also loud firecracker. There’s also renovation going on during our second night. It was at 10:30 am when we heard dragging and banging noises on the roof just above us. There’s also no hot water in the shower, and the water pressure was very low.

There were plenty of drinking stations in Girardot, but throughout our stay, we only went to three places. El Paraiso cafe bar opposite of the Parque Simón Bolívar selling for 3,000COP for a bottle of Club Colombia. The lady in this bar has a fluffy white cat. While sitting outside, plenty of vendors approached us selling cigarettes, ornaments, sweets, crisps, as well as asking for money to support their families.

We also observed that the drivers here or in Colombia were quite impatient or was it just their standard gesture that whenever the traffic light turned green, the car behind the first one will sound their honk? It almost felt like I was back in Vietnam, the honking heaven.

The next place was Cafe Americano Express. Located next to the first bar. This time we didn’t sit outside, and the vendors didn’t disturb us at all. The owner in this cafe has a dog, and it was quite friendly with customers. Or maybe this old man was a regular there, that’s why the dog just let him do anything he wanted. I couldn’t remember the beer price here, but I think it was the same as the first one.

The third-place that we tried was at Rio Bamba Heladeria y Bar at Calle 16. This place located in front of the restaurant bar where we had our lunch when we first arrived. The Club Colombia was 500COP cheaper than the previous two places. Hence, our favourite place to hang out.

While we sat there, we saw a funnily shaped vehicle with loud music, and the seating was like a caterpillar. It’s sort of like Chiva Rumba but more to attract children with its cute shape.

During our three days and two nights stay, the Parque Simón Bolívar was always happening from morning until night. Plenty of booths selling various kind of stuff such as crafts, mugs, t-shirts, accessories, painting, food, drinks, offering tattooing services and some were doing performances.

We also tried walking to the Rio Magdalena from Carrera 7, but the area seemed dodgy that we cancelled our plan. On our way back to the hotel, we walked past Parroquia San Miguel, and there’s a public market not too far from the church. The whole area gave me a bad vibe, so I didn’t dare to take my phone out for pictures.

We had a meal in the restaurant near the Locomotive Parque. I couldn’t remember its name, but this restaurant didn’t sell Club Colombia nor Redd’s. We ordered 2 Carne Asada set meal, three bottles of Aguilla, and the cost was 40,000COP. Huge portion and the meat wasn’t chewy like what we usually had in any other places.

Our journey back to Bogota was with a different company called Cootransfusa. We just popped up at Girardot terminal and purchased our tickets to Bogota on the spot. We got into the next scheduled bus, and the ticket price was much lower, 15,000COP per person.

Without the pre-assigned seat, we chose to sit in the centre. Strangely though, the bus departed 5 minutes early at 12:10 than the scheduled time. Without air-cond in the bus, it was quite warm when it stopped at a few other small stations including Melgar and also Fusagasugá terminal to get the other passengers.

Before reaching Fusagasugá terminal, we took the Sumapaz tunnel. I was sat next to the window, and while breathing in the air, I felt like it contained lesser oxygen the further we got inside the tunnel and I almost hyperventilated during that 3.9km drive.

When we arrived at Terminal Salitre, we tried our luck again for the Yellow fever vaccines, but there’re just so many people in the clinic. We’ll have to come back again on Sunday morning sometimes in the future.

Getting the meter taxi back home from the terminal was a ripped off this time. It was our first time experiencing such a thing. Usually, the charges were around 17,000COP, but this time we got charged double! It was ridiculous, and we were baffled by it.

When we asked him, he said it’s the extra charges picking up passengers from the terminal. But seriously, it wasn’t our first time taking the taxi from the same place, same time. I think he took advantage of us being talkative and friendly to him, and because he stopped us next to a busy road, we couldn’t argue more with him