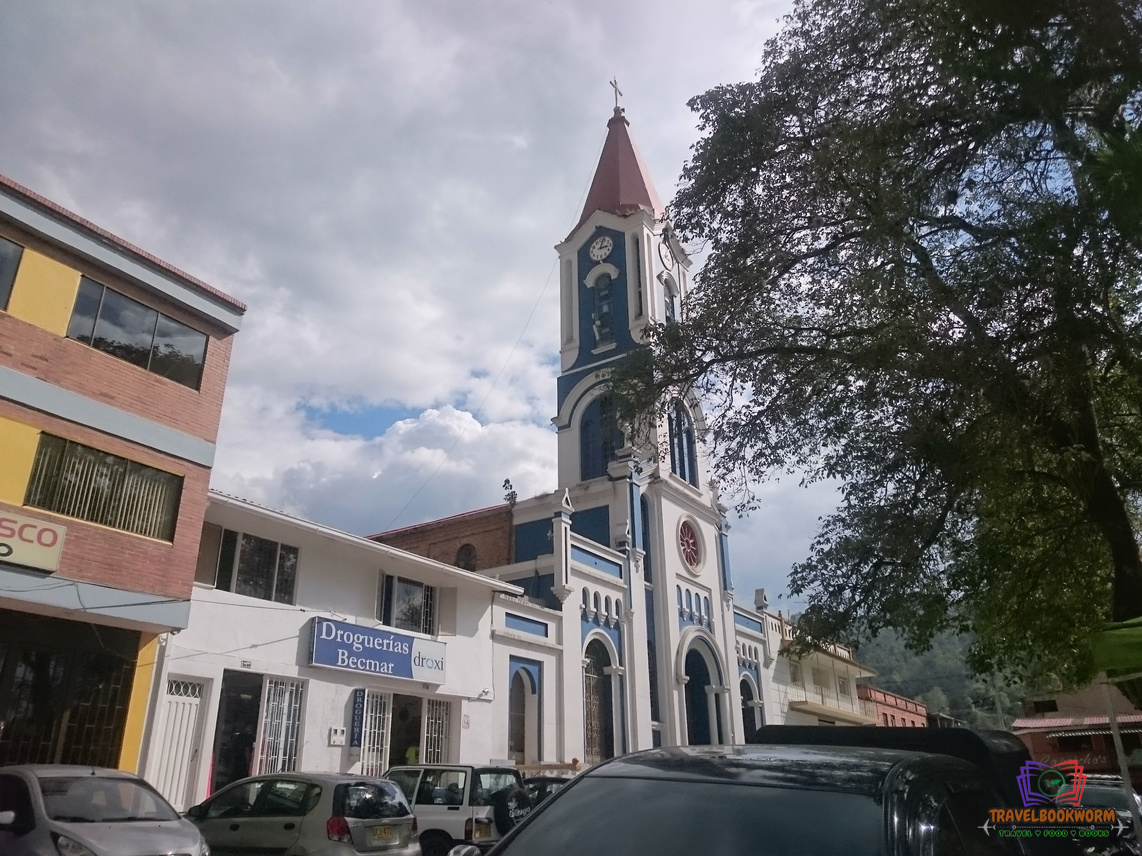 San Francisco is another place where you can go for quick and temporary relief from the cold weather in Bogota. Located about 55km away from Bogota with the elevation of 1,520metres and the average temperature of 20°C. Though it’s not as warm as its neighbouring town La Vega, it’s still an excellent place to be.

Bogota to San Francisco by Bus

Our journey started from our home in Chapinero Alto. We called a taxi via an app called Tappsi, and the driver that picked us up was super chatty. He showed us his impressive collection of money around the world courtesy to his passengers who left it to him as a souvenir. I would have given my Malaysian and Korean coin if only I have brought it with me. The taxi ride to Terminal Salitre cost 17,000COP.

Earlier on before getting on a taxi, we checked on the bus schedule and planned on getting the 11:15 am tickets. When we arrived at the terminal at 10:45 am, we went straight to terminal 2 to a counter called Flota Santa Fe. The ticketing officer told us that the earliest bus we could get was at 12:30 pm! We’re baffled and had no choice but to get on with it. The bus fare was 11,000COP per person.

While waiting for it, we wandered around, looking at all the counter and its destination. There’s also a bus to Peru departing from here. We also noted on the clinic for a Yellow fever vaccine which is at terminal 4, and we thought of getting it tomorrow if it’s not crowded. Besides plenty of eatery place, there’re also casinos in the terminal.

We had an early lunch at Brasa Azul; it’s just on the opposite side of the counter where we bought our tickets. I ordered a Mojarra Frita, and Mike had Pollo Asado. The cost including a bottle of Pepsi was 32,000COP, standard price in a typical restaurant without the set lunch promotion in Bogota.

Our bus arrived on time but departed 12 minutes later than the scheduled time. Along the road, the bus attendant stood on the door calling out places name to get more passenger on board. Blessed him, more passenger was getting on along Calle 80, but they left after riding for only a short distance. The road reminded me of Thailand where in the middle of the busy street, vendors offered to clean your windshield, selling flower, water, food, cigarettes etc.

When we arrived at the town, while everyone got off at the town centre, the bus driver was very kind to us; he asked where we’re staying and then dropped us right in front of Hotel Villa Paz.

Five minutes after we arrived at the reception, our room was ready to be occupied. It wasn’t far from the main entrance, just 20 metres away. The worker lead us to it, and it seemed like the housekeeping just finished cleaning it, as the floor was still wet, and they returned 5 minutes later to give us bath towels. I’m not sure if the hotel’s toiletries don’t include shampoos or they’d forgotten because there’s only a block of bar soap in the bathroom.

When I first got inside the room and noticed that there’s no ceiling fan or portable fan provided, I was a bit worried if we would have to endure another sleepless night like in our Glamping experience. But it turned out to be alright. Although it was a bit warm in the afternoon, during night time, it was bearable. The only problem was that we were woken up quite early by the sunlight streaming in from the door’s glass panel. It would be nice if they installed a curtain.

The swimming pool was open when we first arrived but closed for renovation the next day. It was disappointing considering the reason for our getaway here was to use the facilities. Overall, paying 110,000COP for a night stay in this hotel without getting any breakfast, no chance of dipping in the pool, no fan in the room, incomplete toiletries and a bright room in the early morning, it just wasn’t worth the money.

From the hotel to the town square, it was about 7 minutes walk. It was smaller than its neighbouring town, with the population less than 9,000 people.

Like in any town in Colombia, there’s always church accompanied by a square nearby. I’m not sure when they built this church, I couldn’t find any information about it. And just like any church I’ve seen in Colombia, the interior and exterior were beautiful.

The cheapest Club Colombia beer bottle we could get here was 2,500COP. Some tienda was selling it for 3,000COP. A shot of Nectar Aguadiente was 2,000COP.

I tried other beers such as Poker and Redd’s but quickly fell in love with Redd’s. It was sweet and reminded me of Somersby. We hopped on to a few tienda, and in one of the shop, we have an old man sat with us. He was drunk and kept trying to have a conversation with me, completely ignoring Mike who sat next to him. When the waiter gave us back the changes of 1,000COP on the table, I pushed the coin to Mike, but the drunk man took it and put in his pocket, he left shortly after that.

We had dinner in this lovely German restaurant called Restaurante Campestre Mi Pequeña Alemania. The owner was friendly; he chatted with all his customers.

While having our meal, we enjoyed watching the eagle soaring in the sky, listening to the sound of the river flowing, crickets and birds chirping, and occasionally some goat bleating and a dog barking. It was soothing, almost felt like I was back in my hometown.

There’s live music in the evening, but we didn’t wait for it, and by the time we were about to leave, I saw the owner entertained the diners with his Accordion.

We got back to the hotel quite early at 7:54 pm, but the gate already closed – I’m sure it’s for safety purposes. We rang the bell at the door, and the worker opened it. At night, it was quiet, with only cricket and frog croaking entertained our ears. I went out to sit at the wooden chair next to our room and enjoyed the night view. Plenty of stars in the sky, and no mosquito ruining my solitary evening.

The next morning, we went up to Alto de la Virgen. We started our hike at 9 am, and the sun was pleasant, not too hot. Before starting our journey, we looked at the google map and noticed that the road didn’t reach to the church, so we didn’t know what to expect.

I was thinking if we had to go through some bushes or jungle to get there, we wouldn’t be continuing the journey. But it turned out to be alright as most of the road cemented including the path to the church.

The walk was quiet and peaceful, there’s plenty of condors soaring on the sky, and only occasionally we walked past some local doing their chores. When we got to the top, we were the only ones there. There’s a dog who sat there guarding the place, but it ignored us. The view overlooking the valley and the town was fantastic.

Although the bus driver told us that we could wait for the bus in the hotel, we didn’t want to chance it. We went to the bus company and bought the tickets. It wasn’t long before the bus came, and we sat on the bus on our way to the cold climate in Bogota.

The ride back took about one hour and fifty-seven minutes, the same duration as when we get here. We didn’t get our Yellow fever vaccine on that day as there were many people in the clinic. We’ll have to arrange another day to get it.