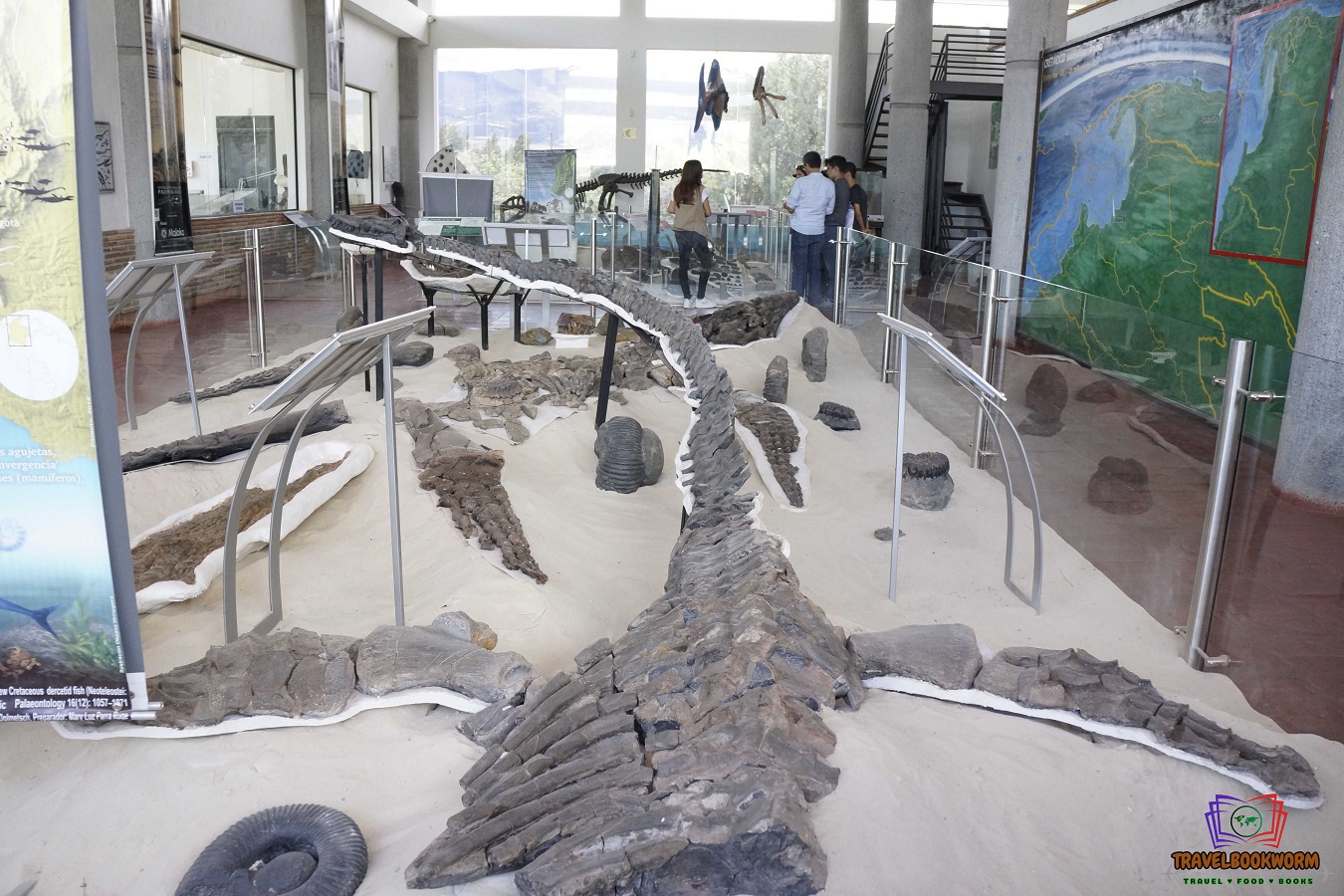 Journey back in time in this Paleontology Investigation Centre / Centro de Investigaciones Paleontológicas [CIP], a place where they study, preserved and display the fossils of the long-lost creatures that no longer exist on planet earth.

The collection of fossils displayed in this place are from the area around Villa De Leyva, and the oldest fossil dated back to five hundred million years ago! The recent fossil they found was in 2015.

When we arrived there from Casa Terracota, several tourists also had just arrived, and the tour was just about to start. Our group of English guided tour consists of ten peoples, and before our guide take us around and show us their impressive collections, she started it off with an introduction of herself and also showed us the painting of the founders and curator of this non-profit institution. The research started more than three decades ago with three peoples with a different field of study and professional life.

Million years ago, the planet earth’s surface didn’t resemble what we see now. No humans existed, even the climate, plants and animals all looked very foreign to us.

Most of the fossils from Villa de Leyva belong to the “Age of the Dinosaurs’ or the Mesozoic era. During the Mesozoic, sea-levels were much higher than today. The continents were distributed in an unfamiliar way and global climate was warmer. There was no ice on the poles, and this strange world was ruled by reptiles. Giant dinosaurs roamed the land, and extraordinary sea-going monsters dominated the seas.

Ammonites are the most common invertebrates found around Villa de Leyva, and that’s why they have become the symbol of the town. It’s easily spotted, and the obvious one is at the Restaurante Entre Caminos, 650 metres away from this centre.

Ammonites are invertebrates related to modern squid, octopus, clams and snails. Each lived inside a beautifully coiled shell.

The coiled shell protected the soft body of the ammonite from predators. It was filled with gas and provided the animal with buoyancy to help it float. Ammonites could also swim using their tentacles. There are so many ammonites found in and around Villa de Leyva that they have become the symbol of the town. You can see one on the pillar just up the road from the CIP.

Ichthyosaurs were fast swimmers reptiles that dived deep into all the Mesozoic worlds’ oceans. Their appearance was similar to modern-day dolphins.

Although these animals extinct from our planet millions of years ago, their footprints still well preserved in these days. It happened after they walked on soft sediment and after some time it became rocks when left undisturbed.

This theropod dinosaur Piatnizkysaurus is the reconstruction of a dinosaur discovered in Argentina. So far, they haven’t found this carnivorous dinosaur around Villa de Leyva. However, based on the evidence of their footprints left behind, they believed that Dinosaurs like Piatnizkysaurus likely lived in Colombia during the Cretaceous period.

Sauropod Dinosaur had long neck and tail, with four strong legs with an elephant-like body, and believe to be more than twenty meters in length. In Villa de Leyva, with many footprints of this animal found nearby, it most probably that this animal lived in herds to protect them from carnivorous dinosaurs.

The Laboratory of CIP

The preparation of a fossil takes several months and sometimes more than a year of continuous work. This CIP Laboratory is equipped with all the necessary tools to study and work on the fossils.

When they found fossils, they physically remove the unwanted stone that enveloped the specimens with hammers as well as drills. Another option is to baths it with sulfamic acid, a technique they invented at CIP because it’s safer and doesn’t produce dangerous vapours.

One of the turtle in their display collections is unique, as it’s the first time in the world that they have a turtle with eggs in its belly.

Turtles are an ancient group of reptiles. They evolved a unique covering, the carapace and plastron, which cover the entire body.

Sea turtles have wing-like front flippers for swimming. Their back flippers are differently shaped and are used for steering. The females also use their hind flippers for digging nests on the seashore. The ‘shell’ of the turtle is an integral part of the body. In these marine turtles, the bony covering has been reduced to a series of struts and braces. The jaws of turtles are toothless and beak-like. These jaws are superb for eating both plants and animals.

Born with massive heads and sharp teeth to tore flesh, Pliosaurs were some of the most aggressive predators in Mesozoic oceans.

The pliosaurs had huge jaws and enormous teeth for eating large prey, such as other Sea Dragons. Some were big enough to swallow you or me whole. Pliosaurs were ferocious top predators with streamlined bodies that could swim vast distances to chase down their prey. Some pliosaurs were even larger than the famous dinosaur Tyrannosaurus rex and much more terrifying.

One of the most incredible fossils displayed in the CIP is the Sea Dragons. While dinosaurs walked the land, these reptiles evolved to live in the sea and swam the world’s oceans 200 million years ago.

Plesiosaurs were Sea Dragons with remarkably long necks, and in many, the neck was longer than the body. Plesiosaurs were all sizes, some were less than a meter in length, and others were over 20 meters long. They were sleek and graceful hunters, but with a small head and without teeth, which they could only swallow small prey such as fish and squid.

Besides all the above mentioned, there are still other fascinating fossils being displayed here, such as the collection of teeth, leaves, the Titanoboa Cerrejonensis fact and Et cetera.