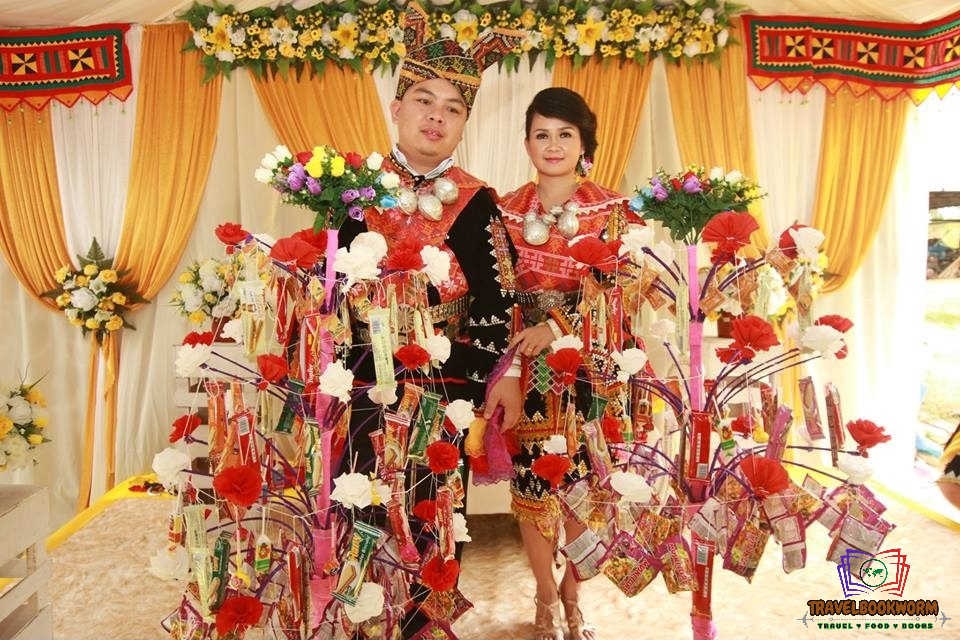 My cousin sealed a deal with us nine months ago when she attended our wedding in Penang. Now, fulfilling our promise, we were back again in the Land Below the Wind, even though just three months ago we had just spent our holiday there. When we arrived at the airport, we took a taxi straight to The Palace Hotel Kota Kinabalu.

Later that night, we went to a seafood restaurant to satiated my craving for crab. We planned to meet up with my other cousin, Jessie for dinner but she couldn’t make it and promised to take us for lunch tomorrow.

The next day, before heading back to Kota Belud, Jessie treated us to lunch at the Old Farm City Park Seafood Restaurant. The meals were delicious, and I get to eat my childhood favourite vegetable called Sayur Manis.

The Wedding Mass in St. Edmund

On the 19th, Joy and Andy’s wedding Mass was held in St. Edmund Church together with three more couples. The church packed with relatives that came to witnessed the ceremony, and it lasted for about an hour.

Once it was over, Mike and I along with my brother and his fiancee, Jussiana went to the lunch hall next to the Church to fulfil our duty as a wedding reception. There’s another girl, but I have forgotten her name. We sat at the entrance, greeting the guests and also distributing the door gifts while asking them to write something on the guest card for the bride and groom.

That night, I went to their house which was about 40 metres away from mine and helped them cutting vegetables while the others cooked it. In the village, whenever there’s an event such as a wedding, the villager will lend a hand. It was midnight when I finally finished my task.

The next day in the afternoon, when the bride and groom arrived wearing traditional Dusun costumes called “Sinipak”, it’s when the party started in full swing. The place crowded with people, and I get to meet with many which I couldn’t even recall their name. Being away from my hometown for nearly 13 years, I have a hard time recognising peoples around me.

During the party, the traditional activities held were The ‘Sepak Manggis’ and also the ‘Rebut Mahligai’. The Sepak Manggis is more for adult games, and the “Rebut Mahligai” intended for children.

In the Sepak Manggis, the decorated box contained money as a prize, and it’s being dangled in a tall bamboo pole as high as 20metres. Participants need to kick upward using a “Takraw Ball”, and if the money falls, the hitter can pocket it.

In the Rebut Mahligai, when the bride and groom present the Mahligai, the kids will rush over to grab whatever they can have. The reward isn’t money but sweets, chocolates, crisps and biscuits. I remember finishing up the “Mahligai” by securing those goodies onto the colourful branches with a thread. It takes times to complete it but only takes seconds before the children demolished it.

To Joy & Andy, I wish you guys a lifetime of love and happiness!

While I was in the village, Vivien had been bugging me to bring back some fruits – Tarap and Bulunu, so the morning before I left, my mum plucked it from the trees not far from our house and packed it for me. It’s difficult to get those in Peninsular Malaysia and also hard to get through the custom because of the strong smell. But I got lucky because the fruits weren’t ripe thus the customs officer couldn’t smell it compared to when it’s ripped. It took only one day for it to ripen, and when it did, I brought it over to Vivien, and together, we savoured it. Oh, how I longed to eat it again!