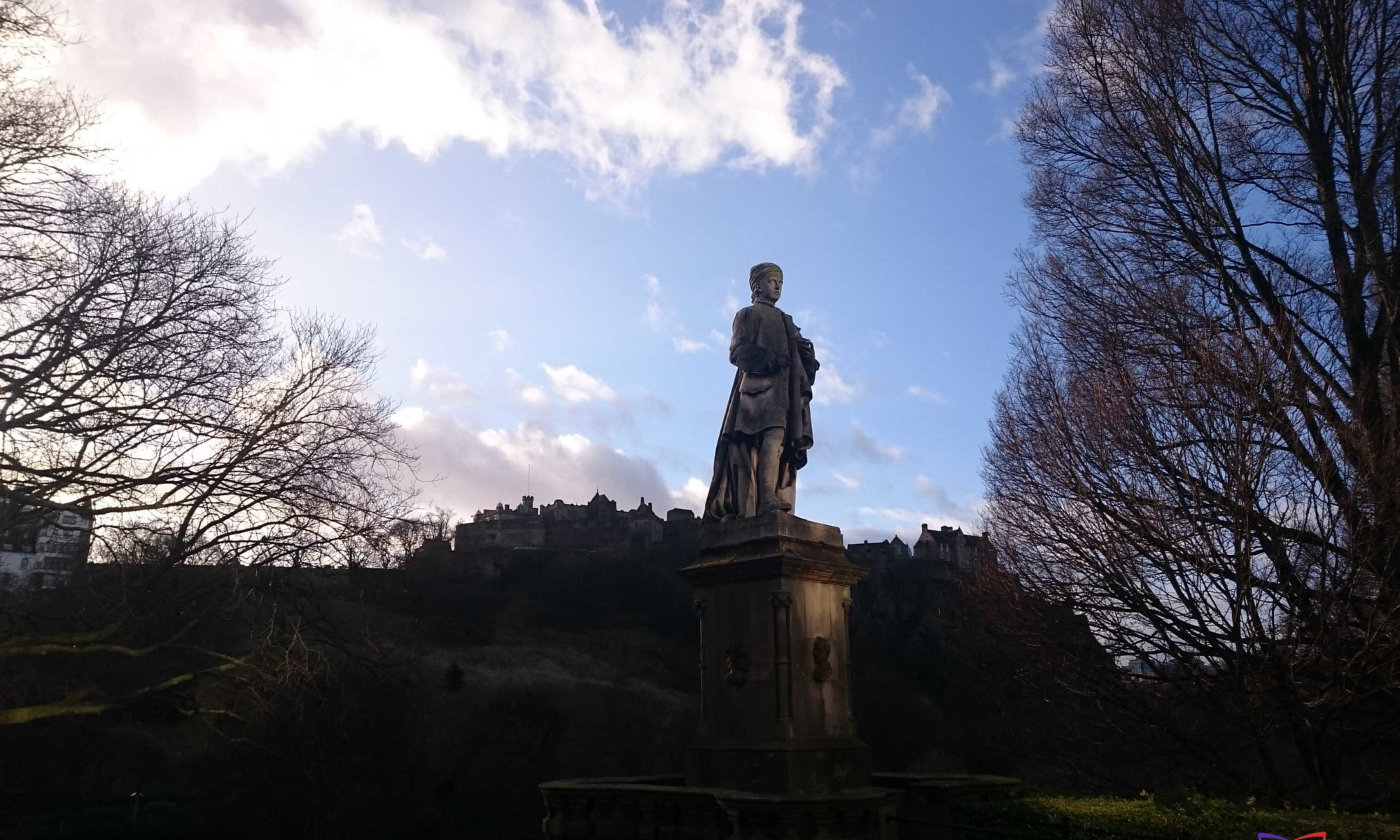 The sun was just about to rise on the horizon at 8:40 am when dad drove us to Picaddily station to catch the train to Edinburgh, the capital city of Scotland. We’ve already booked the return tickets online, and when we got to the station, we printed it out. Our train departed at 9:26 am and reached York after 75 minutes journey. From this station, our next train journey to Edinburgh Waverly station took 2 hours and 27 minutes.

Macdonald Holyrood Hotel & The Holyrood 9A

Macdonald Holyrood Hotel located just about 950m from the train station, but because we weren’t familiar with the place, and getting our bearing right took us sometimes. Thankfully, after thirty minutes walking around the area, we managed to get to the hotel and checked in 20 minutes before Mike’s scheduled phone interview with the BC.

Once he settled with the official thing, we headed out to have our first meal and drinks at The Holyrood 9A located about 500m from the hotel. The BBQ Burger I’d was tasty, but they didn’t have my favourite Kopparberg Strawberry & Lime Cider flavour, and only have Pear on that day.

In the evening, we managed to tour around the area for a while before the Hailstones pounded the earth, and we were forced to take shelter in the Wash Bar. It was pleasant and warm in the bar with the heating on, and after 2 pints of Strongbow, a packet of roasted and crispy bacon, I was dreading to face the cold temperature outside, but we must continue our walk.

The Street of Light in Royal Mile

The Street of Light event where thousands of colourful neon lights lighted up the street in the Royal Mile was a sight not to be missed. This event started from the 30th November until 24th December featuring music from Edinburgh Festival Chorus, Edinburgh Gay Men’s Chorus, Edinburgh Police Choir and Edinburgh Royal Choral Union.

Before heading back to the hotel, we stopped for dinner at AlBanach Whisky Bar Coinburch. It was a busy night, but thankfully they still have a room for two. I first tasted Mulled Cider here, and immediately fell in love with it, in my opinion, it tasted much better than Mulled Wine. It also my first time eating Haggis Fritters, but I couldn’t stomach it, and it wasn’t because of the sheep stomach, but for me, it’s greasy.

The main course we had was Fish & Chips, and it was the biggest one I’ve ever seen! Mike had Hand-battered Haddock Chips, and mine was Bannerman’s of Tain Scottish Scampi.

Some of the AlBanach Food’s Pricing:

On the second day, we had our brunch at The City Cafe. I had waffles with maple syrup & Nutella chocolate. The food was delicious, menu selection was great hence, it quickly became our favourite dining place.

Some of The City Cafe’s Food Pricing:

In the afternoon, we went to a few places, and the main one was Mary King’s Close guided tour. Our guide led us to the well-preserved passages beneath the Royal Miles, showed us the living condition during the time and told us the grim history of the place. The journey lasted for an hour, but unfortunately, no pictures allowed throughout the tour, and to make up for it, I bought a fridge magnet from the place.

I also took the chance to change some of my Malaysian Ringgit at the company called NO.1 Currency located at 207 high street. Pounds Sterling soared high with the exchange rate at 7.0294. (MYR 720 for 102.43pounds).

Pictures Around the City

Founded in 1124, St Giles’ Cathedral also known as the High Kirk of Edinburgh is one of the most important architectural landmarks along the Royal Mile in Edinburgh.

Calton Hill together with Arthur’s Seat and the Castle Rock was formed by volcanic activity about 340 million years ago. Around two and a half million years ago the first of many Ice Ages began in Scotland, and Edinburgh was buried under a massive ice sheet, hundreds of metres thick. Throughout each Ice Age when the glaciers were at their heaviest, the weight of ice carved and gouged out many of the hills you see today.

Holyrood Park’s highest point is Arthur’s Seat. This ancient volcano is 251m above sea level, and coming to this spot gave away an excellent view of Edinburgh city.

The Portuguese cannon was one of six cannons that once sat on Calton Hill. The others were melted down in 1940 to supply metal for World War II.

This brass cannon has travelled all over the world. Cast in the early 15th century, with the Royal Arms of Spain on its barrel, the cannon was transported to the Portuguese colonies in Southeast Asia sometime before 1785.

Then, either by trade or capture, the cannon came into the possession of the King of Arakan, ruler of a state on the west coast of Burma. It was subsequently captured by the British during their invasion of Burma in 1885.

In 1886 the cannon was presented to Edinburgh and placed on Calton Hill the following year.

After the visit to Carlton Hill, we stopped by Serenity Homemade and ordered a Beef Meatballs with fries and cheese for takeaway. Back at the hotel, we rested for a while before heading out to Hemma where Mike had his Nordic seafood stew and a few pints of William Joker & Barneys. After the long walk today, we couldn’t stay up for long, and our last stop was at Holyrood 9A.

The next morning, before walking down to Princess Street Gardens, we had our breakfast at City Cafe. It was almost 11 am by the time we got there, and the Christmas market already starting to get busy.

Erected 1840-44 to the memory of Sir Walter Scott (1771-1832). Born in Edinburgh, Lawyer and ardent patriot, he won enduring fame as a romantic poet and the author of the Waverley novels. This monument was designed by George Meikle Kemp and the statue of Scott is by Sir John Steel.

Information from the plaque

We strolled along the path towards the castle, crossing the bridge while admiring the beautiful view of nature with the castle stood proudly above the hill.

No trip to Scotland’s capital is complete without a visit to Edinburgh Castle. This mighty fortress perched on a volcanic rock has been a place of sanctuary and a symbol of power for about 3,000 years, and now, this place operates as a large museum comprising a wide range of Scottish history.

When we got to the ticket booths, the queue for the ticket was long, but with so many fascinating things to see inside, waiting for our turn in the chilly weather was worth it. The entrance ticket cost £33 for the two of us.

This small plot of land overlooking the city is a cemetery for dogs belonged to Scottish armies recording back to 1840.

King David I built the chapel around 1130 and named it after his mother, Queen Margaret. This oldest building in Edinburgh once used by Scotland’s royal family for worshipping, nowadays open for visitors, and the chapel also hosts weddings and christenings.

In 1449, Duke of Burgundy – Philip the Good ordered this as a wedding present for King James II of Scotland who married his great-niece, Mary of Gueldres in 1457. Named after the Belgian town where it was made, this six-tonne siege gun made from wrought iron could fire a 150kg gunstones for up to 3.2km.

The firing of the gun dates back to 1861 when businessman – John Hewitt brought the idea to Edinburgh from Paris. Ships in the Firth of Forth once set their maritime clocks by the sound of the gun fired. Till this day, the gun is still fired every day at 1 pm, except on Sundays, Good Friday and Christmas Day.

A glimpse into the life of prisoners in the 1800s where hundreds of the prisoners were held in these bleak and confined spaces in the vaults below Crown Square.

The prisoners’ living conditions were regulated by law. They were generally better off than common prisoners.

Health Care
A surgeon was assigned to each British prisoners of war. The surgeon for this prison was John Thompson, who regularly attended the prisoners here and converted a house in Edinburgh into a temporary hospital for sick prisoners.

Because the Americans were officially regarded as pirates, they received only 1 pound (560g)of bread a day.

Allowances
Every prisoner was given clothes and 6 pence a day. In addition, French prisoners received an extra penny a day and clothes from their own government.

Passing Time
Gambling helped to while away the long days of captivity. Prisoners probably used the chess sets, backgammon boards, dice, dominoes and drafts that they made for sale. Some prisoners would gamble on anything – even the time it took for a rat to appear from its hole in the wall.

Once we finished the tour at the castle, the activity afterwards was drinking around Grassmarket. We went from one bar to another, starting from Brew Dog to Greyfriars Bobby’s Bar, then to the Last Drop, the Beehive Inn, Maggie Dickson’s where I had Rekorderlig Mango Raspberry Cider and O’Donnells crisps and the last one at our favourite dining place, The City Cafe where I had 2 shots of coke whisky and chicken strips. Before heading back to the hotel, we also ordered Kebab Donar to take away at Moratti, and it was the perfect food to end the day.

I had cider Fanny’s Bramble Sandford Orchard Cider with Blackberries, and it was excellent. I also learnt the process of making beer, not live but from the explanation on the board 🙂

A local man named John Grey was a regular in Greyfriars, and when he died in 1858, his dog named Bobby, a scruffy Skye Terrier slept at his grave for fourteen years until his last breath. The local then buried Bobby alongside him and erected a statue in tribute to Bobby’s loyalty.

In this bar, I ordered my new favourite drink – mulled cider and also Nobby’s nuts.

The next morning before leaving this place, we went to Holyrood Palace, the Queen’s official residence in Edinburgh and also home to the Scottish royal history.

Before taking the train back, we stopped by for one last time at our favourite cafe to have breakfast. I ordered the same menu as yesterday but with additional of Milk Shake Strawberries.

The train departed from terminal 9 to Houston London at 12:51 pm and arrived at Preston after two hours thirty minutes. When we got there, the train to Picadilly was already there waiting for us, and after fifty-six minutes journey, we arrived in Manchester. During the ride, there’s no ticketing officer came and checked our tickets. In these four days three nights trip, I enjoyed my time there, there’s plenty of sightseeing places, and just by walking around the city, we’d walked for a total of 18.5km, such an exciting place to be.