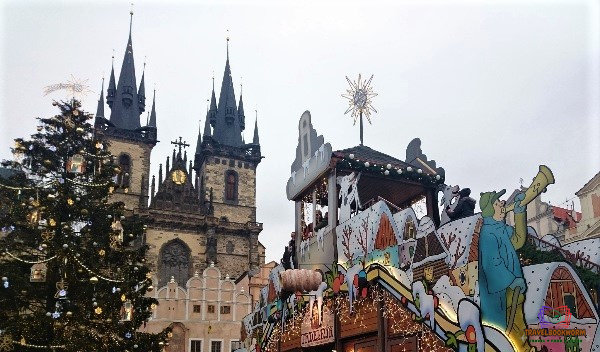 I loved Prague! It was the most beautiful city that I’ve ever visited. Walking around the places were like walking in a fairyland with its picturesque views.

Prague 1 was the medieval heart of the city. The great Stare Mesto (The Old Town), Josefov (The Jewish Quarter), Mala Strana (The Little Quarter), Hradcany and Nove Mesto (The New Town) were all in the same district. And most of the sites were UNESCO World Heritage Site.

On this trip, we flew from Manchester airport to Prague Vaclav Havel Airport, and the flight time was about two hours. Mike’s parents were with us too, and we stayed at Dominium Residence Malostranske, located close to the Riverbank in Mala Strana Area.

Our window’s view, which was the St. Nicholas Church – built between 1704 and 1755 by Christoph Dientzenhofer, was so beautiful it could be printed out as a postcard.

The dome to this Baroque church measured 20m diameter, and the impressive part was that the inside height to the top of the lantern was over 49m, which was the highest interior in Prague.

This stone bridge completed in 1402 was always busy with tourist. Throughout our stay, we pretty much walk on this bridge every day, crossing over the Vltava river to the Old town, and the view never ceased to amaze me.

Along the bridge, there were people selling stuff like paintings, handmade glass earrings, key chains, music performances etc. There’re also thirty saints statues lining up the bridge. I also witnessed a guy go down on his knee and proposed to his girlfriend. How romantic!

This statue was easily spot on, located at the entrance to Charles Bridge; it’s tributed to Charles IV, the first Bohemian king to become Holy Roman Emperor. The monument was built with him standing and with four women seated on the base. Perhaps, it was due to him being married four times?

Holy Roman Emperor Charles IV had made a significant transformation during his reign that some places were named after him, such as the beautiful Charles bridge.

The Lesser Town councillors got The Holy Trinity Column created in 1715, close to the Church of St Nicholas. The column, which was surrounded by sculptures of saints and angels, was meant to show gratitude to the supposed spiritual powers for the end of the period of illness.

What’s unique about this column was that it has an eye in a triangle, which was the Eye of God on the top.

This beautiful square was founded in the 12th century and had witnessed many historical events. The place was between Wenceslas square & Charles bridge.

Wenceslas Square was named after Saint Wenceslas, and it holds a Statue of the Bohemia Saint on horseback. There were Clubs, Restaurants, Bars in the area, and it’s also a great place to go shopping.

One of the attractions in this old town square was the musical show—the music emanating from the town hall’s Medieval Astronomical Clock. The clock was built in 1410, and it commanded attention every hour, from 8 am – 8 pm, where people gathered around and wait for it to chimes.

Tyn Church / Church of Our Lady

This beautiful twin tower Gothic church was built in the mid 14th to the early 16th centuries. Legend said that the all-time Disney’s favourite show – The Sleeping Beauty’s castle, was created based on this church.

This beautiful gothic tower was initially built to showcase an attractive entrance to the city. However, later on, they used the building to store gunpowder in the 17th century. Hence, the name – Powder Tower.

The castle complex was about 700m away from the place we stayed. We walked over with the terrain slightly uphill and saw this weird construction block that looked half the typical building, and on our way back, we walked over Manes Bridge.

The first construction built in this complex was the Church of the Virgin Mary. It was constructed in 870, and after a few decades and centuries later, they added on a few others, such as St. George’s Basilica, St. Vitus Cathedral and the Royal Palace, which were the main sights within the castle.

Note: Adolf Hitler spent the night at the castle on 15th March 1939.

Located in the Old Town, Prague 1, this magnificent building with beautiful interiors and exteriors housed a grand concert hall, a restaurant, cafe and beer hall.

Municipal House was first opened in 1912, but it wasn’t well-known yet, not until 28th October 1918 when the proclamation of the independent state of Czechoslovakia held in this place.

During our visit on 15th December 2015, while waiting for the performance to start at 7:30 pm, we dined in at Plzenska restaurant located on the underground floor of the Municipal House. The restaurant was enormous and had a beautiful interior design.

We ordered Beef Sirloin in Cream Sauce and Old Prague Beef Goulash. While waiting for our meal to be ready, I took advantage of their free wifi and uploaded about 1GB of my photos to my Google Drive. The whole process only took 15 minutes with its fantastic internet speed!

When it was time for the performance, I felt extremely excited! It was my first time watching a live orchestra. In the waiting room, there were many people, and all dressed up nicely. However, there’s no official dress code for the concerts, and attire mainly was smart casual.

Our seats were at the balcony Row 1, seats 18 & 19, and it was perfect with a clear and centre view. It cost 1200Kč for the two seats, and the show lasted for 90 minutes. The hall’s design looked very grand, and when they played the instruments, they executed every performance beautifully, and I got goosebump from the start until the end.

I wasn’t sure if we’re allowed to film the performance, but I did it when it was almost towards the end of the show, and I saw many people started doing the same as well. Anyway, I recently found the whole play filmed and published on this site. Thankfully, we weren’t on it 😉. Our seats were on the top centre, right behind the conductor where he stood.

This observatory tower was closed for a private event when we’re there. We were pretty disappointed since we travelled 30 minutes with the tram all the way to see the view of Prague city from the tallest building in the city – 216m in height. Nevertheless, it’s still cool to see the building up-closed.

We went to this restaurant on our way back after being let down as the observatory closed for a private event. We didn’t order a heavy meal, just snacks and a few beers. It cost 31,00Kč for 0.3l Pilsner Urquell and 42,00Kč for 0.5l. As for the Grilované klobásky, it cost 159.00 Kč.

Another restaurant we went to was this restaurant, located just about 150m away from the famous Charles Bridge. There’s not much to see on the outside since it was already night time.

After the 516m walk over Charles Bridge, we stopped for drinks at the hotel Hotel U Zlatého Stromu’s outdoor bar. I had Mille-Feuille with Creme Chantilly and Marinated Wild fruit, and it was refreshing and yummy! It cost 99Kč.

I’ve always loved collecting gemstones, and being able to travel here had given me a chance to get one of the stones that have piqued my interest lately. Moldavite, a beautiful name for a beautiful stone.

Note: A meteorite impact formed this stone, and The Czech called it Vltavín because they found it near the Vltava river.