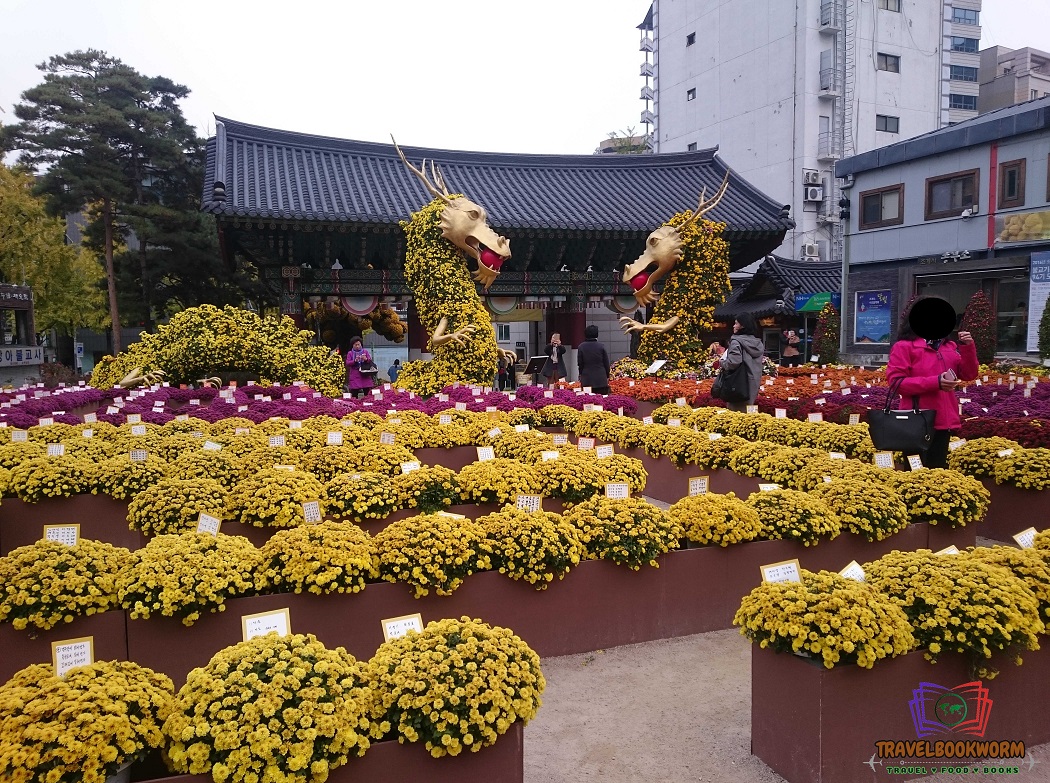 It’s autumn in Seoul, and I haven’t got a chance to get a picture of the fall foliage yet. So, on Wednesday at 1:30 pm after my Korean lesson finished, I started my journey to discover the beauty of Autumn in Seoul.

My plan was to visit Changdeokgung Palace. My Seonsaengnim was kind enough to accompany me on my trip. When we came across the Cheonggyecheon stream, she told me that there would be a lanterns festival along the river starting from 4th to 20th November and it’s 1.2km long.

On our way, I saw a strange-looking tree with lots of yellow flower in front of Jogyesa temple. It was a diversion to my original plan, but I couldn’t ignore it, so I stopped by for a visit. But It’s worth it, the temple surrounded by beautiful flowers and two dragons were guarding the place, both covered with flowers.

My teacher has an urgent thing to do at home and couldn’t accompany me any longer. Before leaving me, she told me on the direction toward my ultimate goal, and I felt relief knowing that the route wasn’t complicated.

The short history of the temple found at the right corner of the temple’s gate written in Korean, English, Chinese and Japanese.

Jogyesa temple is the main temple of the Jogye order of Korean Buddhism, Gakhwangsa temple, which was built in 1910 with donations from Buddhist temples worldwide, was moved to the present location of Jogyesa temple in 1937, and was named after Taegosa Temple on Samgaksan Mountain the following year. In 1941, the Laws of Taegosa was created and the Jogye Order of Joseon Buddhism was officially inaugurated. In 1954, with the drive to clean up Korea’s Buddhist community, the temple was renamed again, taking its present name of Jogyesa.

I resumed my journey not long after my teacher left me. By walking straight down, it takes me to a junction. To the left is Gwanghamun palace and my destination was on the right. There were a few Gingko trees along the road, and its leaf has changed to yellow.

I went to the ticket counter to ask for the Secret Garden tour, but unfortunately, the tour in English has already finished for the day. She offered me the Palace tour, but I wanted to do both together so, I told her that I’d come back another day. She then advised me to be there early if I want to do both tours.

Well, honestly, I didn’t feel disappointed about the unsuccessful trip today because the sky didn’t look promising too. I would rather wait for another day when the sky is blue and inviting.

On my way to Anguk station, I met a couple of Malaysian ladies wearing Hanbok, and according to them, they rented it 15,000won for 4 hours in Insadong and that they have been walking to the palaces around wearing the outfit. I would love to wear it too but only when travelling with a group of friends. But I don’t have any friend here, so, no chance for me to wear that.