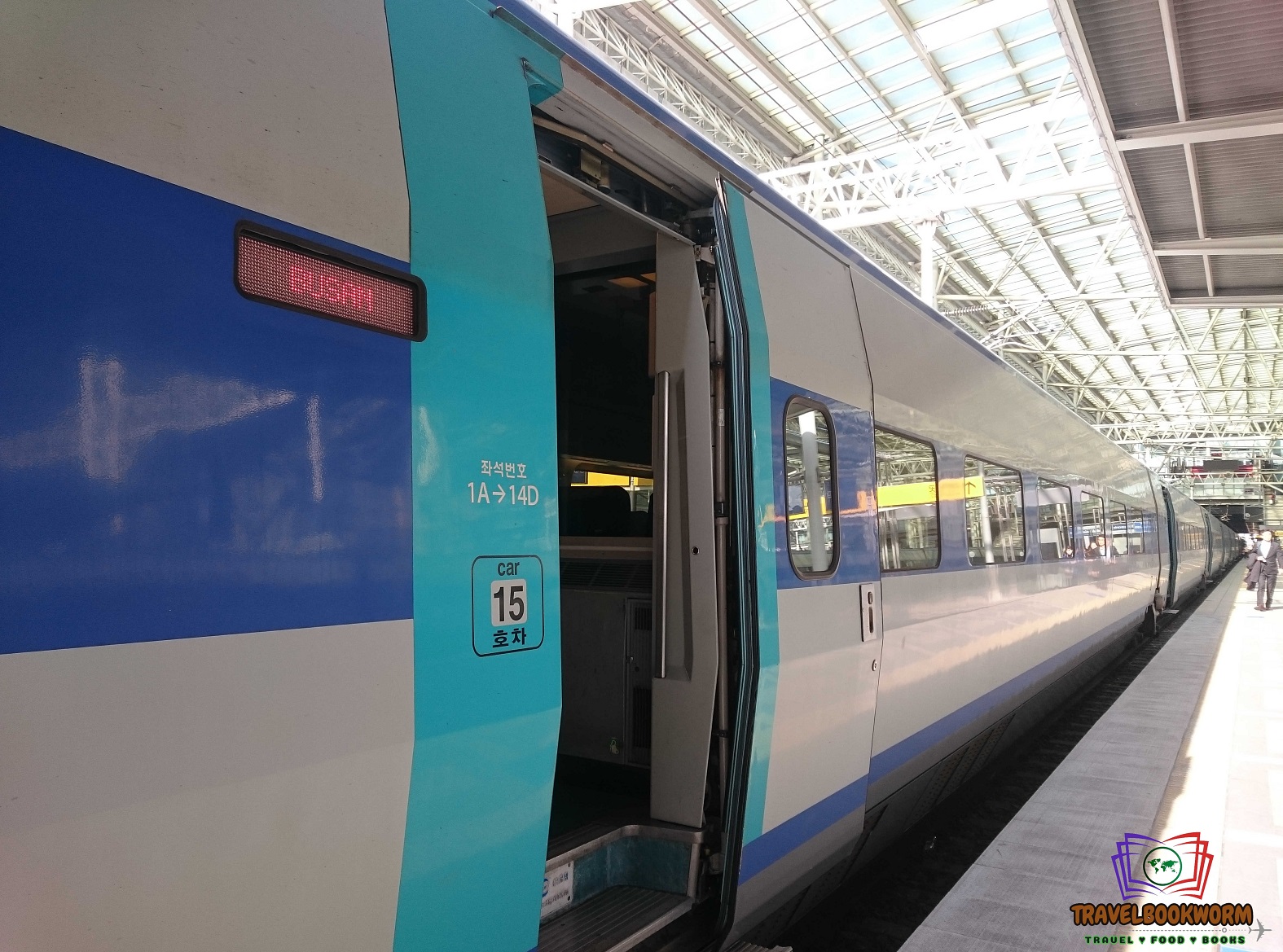 Busan is the second-largest city in Seoul, with a population of 3.6 million. I’m excited to see what this city could offer me. So, when Mike had a teacher training job to do at Pukyung National University, I tagged along with him.

During these four days and three nights trips, we stopped for a night in Nam-Gu and the remaining nights at Haeundae-Gu.

We left Seoul station at 1:30 pm with KTX train no.141. The journey takes about two hours and thirty minutes.

Walking out from the train station, we veered to the right and walked towards the Taxi station. We could see that the crowd had already formed a long queue. But it didn’t take a long time, we’d only been waiting for about 10 minutes before getting into one. The journey to the campus takes about 20 minutes, and the fare was 8,600won.

When Mike left for work at 5:30 pm, I spent my time reading books and watching movies. Once he finished his work at 9 pm, we headed out for late dinner at Burn & Bun’s. We were the only customers there, and it had me worried about the quality of the food. But turned out it was alright. So, maybe it was just because it had already passed dinner time.

I ordered a bacon burger, and mike had a fireball burger. The total price was 22,500won, and with a full stomach, we strolled back to the room and retired for the night.

The next morning, we had lunch at the nearby restaurant, and the food was cheap. It was only 7,500 won for the two of us.

When we finished our lunch, Mike walked back to the University, and I set foot to find the way to the UN memorial park. It was said to be within walking distance from the University. However, I’ve always had a problem reading the map from my phone, so after walking about half an hour in a circle, I finally found the entrance and entered it by the East Gate.

If you were coming from the main gate, you would walk through from here:

The park was built to honour fallen soldiers from 16 countries who fought in the Korean war from 1950 – 1953. The place was immaculately clean and beautiful.  I would’ve loved to walk along with the tombs learning their name, but it’s forbidden to step on the grass. The only place we could walk was the cemented paths.

This massive place (35 acres) contains 2,300 graves of the fallen soldiers from these countries:

The inscription can be read from the italic text below:

Beyond frontiers and faiths
Our rights now in a rendezvous;
Enabled thus to sense and caress
The hugging warmth of all that is past.

How precious were times before Pusan
When sharing the glory of unified thought
And of battling hand-to-hand
Over vast valleys and hills.

Brief was this advent for soon I parted
In much mysterious a way,
My life-blood drained one night
In flag-like waves and flutters.

Now enwrapped in Pusan’s soil,
My senses reaching deaths infinity;
And “Fatherland” grown to such dimensions
Conversant I am in all tongues there are
All us Martyrs utterly awake;
Our hands united and stretched to the skies;
In communion, we are through the throbbing soil,
Which by a sense-of-belonging has become our own

I salute you oh Turkish Martyr!
You in Anatolia and I in Pusan;
You have fallen for my Turkey
And I, for our world

From Greece for her fallen sons in gratitude

Thou Martyr who has fallen
In a sacrifice supreme
By defending your mother-soil
To your forebears’ full esteem
Who could erect a sepulchre
Worthy of your size sublime,
The bosom of history suffices not
you to enshrine
Nor could mankind’s story contain
Other epochs of your grace,
Only infinities would eternize you
In time and space!

The monument to Canadian fallen was dedicated by the Canadian Veterans, Korean War Commemoration Committee on November 11, 2001.
The serviceman depicted is hatless eliminating the need for service or unit designation. It projects an air of individuality and informality, which are recognized traits among Canadians. The bouquets of two national flowers, 21 maple leaves and roses of Sharon, held by young girl and boy, symbolize 21 Canadians who fell and have no known graves.
This bronze statue was designed by a Canadian Veteran, Vincent R. Courtenay and sculpted by a Korean artist, Yoo Young Mun.

Behind the wall, you can find this information:

It is estimated that 100,000 British servicemen and women, many of them under National Service, served during the Korean War and in three years of brutal conflict British losses amounted to over 1,000 killed and many more wounded. Over 1,000 British servicemen suffered as Prisoners of War, many being subjected to brutal treatment. Those missing were presumed dead.

In Memorabilia Hall II, there are some pictures of the fallen soldiers and also key roles during the war, which you can read as follows:

Key roles during the war
Australia was the third country among the U.N. members that participated in the Korean War to send combat troops and send all ground troops, naval and air force. It first sent naval and air force on Jul 1, 1950, and ground troops on Sept. 27.
Two Australian frigate ships stationed in Hong Kong at the time under the command of the British Commonwealth Far East Fleet arrived in Korean waters on Jul. 1, 6 days after the start of the war and began operations under the command of the U.S. Far East Navy Headquarters. The Australian Navy carried out sea operations with the force of 1 aircraft carrier, 2 destroyers, 1 frigate ship, and the total number of ships participated in the war was 9 (1 aircraft carrier, 4 destroyers and 4 frigate ships).

The Australia Air Force 77th Flight Battalion stationed in Japan, as a member of British Commonwealth occupying force, participated in the Korean War under the command of the U.S. 5th Air Force Corps, and later 1 air transport formation was added to the war.
The Australia 3rd Battalion stationed in Japan as a member of the Allied Forces arrived in Busan on Sep. 27, 1950 and began ground operations after being attached to the British 27th Brigade.
Afterwards, the ‘Australia 1st Battalion’ arrived in Busan from the home base on Apr. 9, 1952 and it was attached to the British Commonwealth 28t Brigade of the 1st Division. This Battalion returned home after being replaced by the ‘Australia 2nd Battalion’ newly deployed on Mar. 21, 1953. One battalion from the Australia ground troops first participated in the war and 2 battalions joined the war after Apr. 1952.

I wandered for about 2 hours in this place before heading back to the University. We then took a taxi and moved on to our next destination, Haeundae Beach.