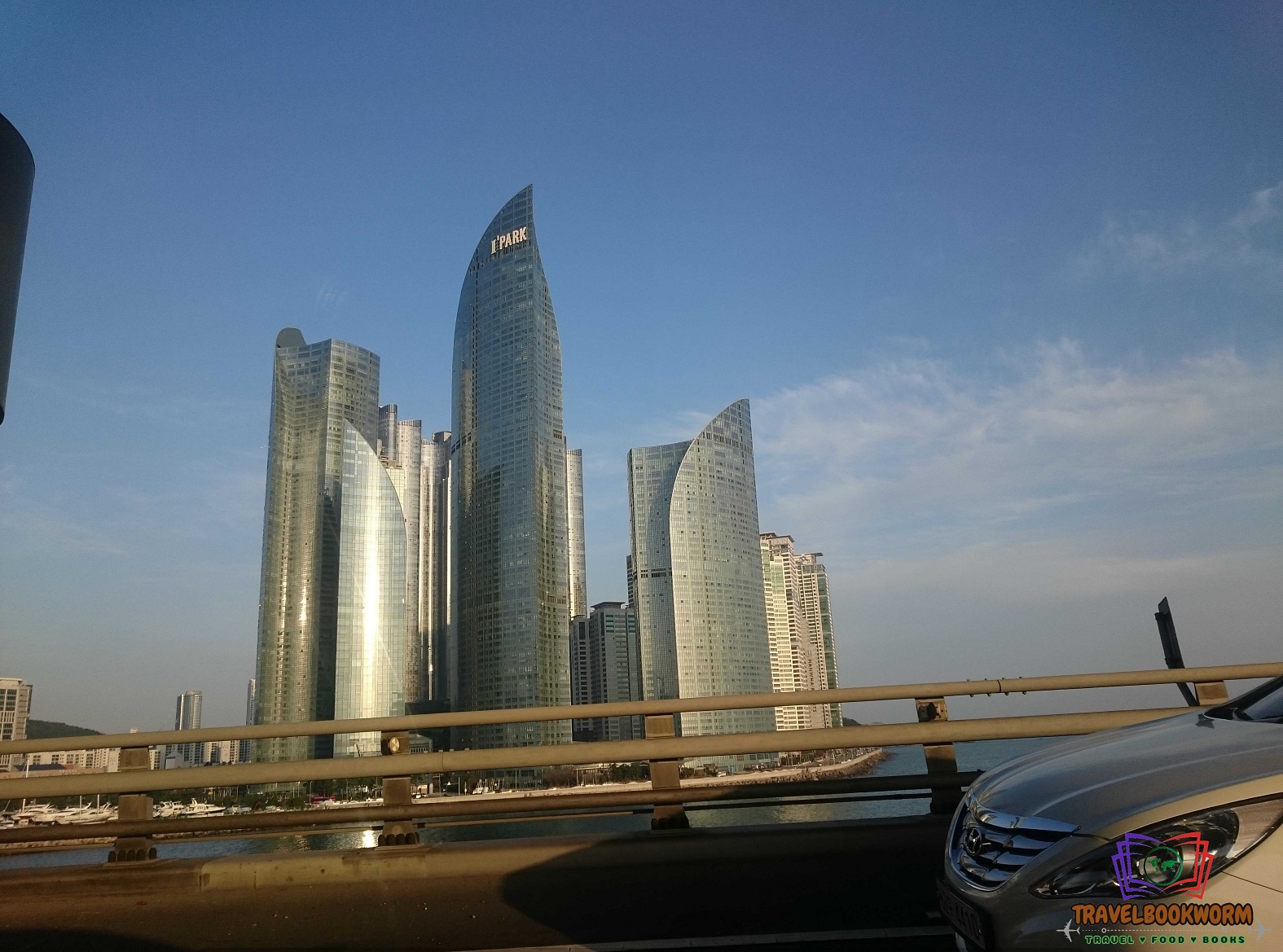 An hour after I finished my tour at the UN Memorial Cemetery, we took a taxi from the Pukyung National University campus to Best Western Hotel in Haeundae, it took 24 minutes in a taxi, and the fare was 10,600won, including Tol.

We crossed over the Gwangandaegyo bridge, nicknamed Diamond bridge which was the second-longest bridge in the country after the Incheon bridge.

Haeundae beach was only 2 minutes away from the hotel. While we were out there, we walked along the shop and checked out for a potential drinking place for the night.

Next, we went to the Asian food cafe, where we had lamb skewer and Soju. We also went to Fuzzy Navel, which was just in front of the hotel. I couldn’t recall the name of the last place where we had a pancake and drinks. In fact, I couldn’t remember much on the journey back. But I do know that we had it at the Busan Haeundae Traditional Market 부산 해운대전통시장

I woke up with a headache the next morning, and I desperately needed soup for lunch to help with my hangover. The place we went to was crowded, and we had to queue to get a seat.

In the evening, we went for a walk on the beach. There was an observation deck to look at Tsushima island across Haeundae beach, but I couldn’t see anything because it was foggy, and it said that the island was only visible an average of 60 days a year.

We walked towards Westin Chosun and followed the trail to the Mermaid statue. That’s the only place we went because the sky was darkening and we didn’t want to get caught in the rain.

The legend of Princess Hawangok
Little Mermaid in Denmark, Princess Hwangok in Haeundae
A statue of the mermaid known as Princess Hwangok gazes into the open sea in Dongbaekseom Island to the west of Haeundae Beach. Once upon a time, Princess Hwangok from Naranda, a Mythical country of mermen and mermaids, married King Eunhye of Mugung, a legendary kingdom. The princess missed Naranda so much that she would come out at night and gaze at the view of her home reflected in her Golden Ball on every full moon.

We stopped by to have some drinks at Vecchia & Nuovo, the Westin hotel’s cafe. We ordered cappuccino & hot choco. The two drinks cost 12,400 won.

For dinner, we went to Thursday party burger & pasta, which was located just a few steps from the hotel. I had a delicious Hamburger meat pasta for 12,300 won. If you come for a beer, the Draft Cass was selling at 3,000won.

It was raining the next morning, and we hurriedly walked towards Haeundae station, which was located about 400 metres away from the hotel. It took us 6 minutes to reach the station. Since T-Money couldn’t be used here in Busan, we bought tickets from the vending machine @ 1,400 Won per person and boarded the metro line 2 (Green Line) at 10:20 am to Seomyeon station. From there, we transferred to line 1 (orange line) and reached Busan station at 11:02 am.

Across Busan station, there’s Chinatown, and there’re many Russian restaurants around the area. We chose to have our lunch at one of the Korean restaurants. Since we’re in Chinatown, it’s not a surprise that the owner could speak Chinese too.

While waiting for the train, we had hot Chocolate and Cappucino at Pascucci, a shop located in the train station.

Fifteen minutes before our train was scheduled to depart, we went down to look for train # 140, and it was already there. We got on to it and waited for it to depart. Exactly at 1 pm, the train slowly left the station and gradually increased its speed towards our destination, Seoul. Home, sweet home!