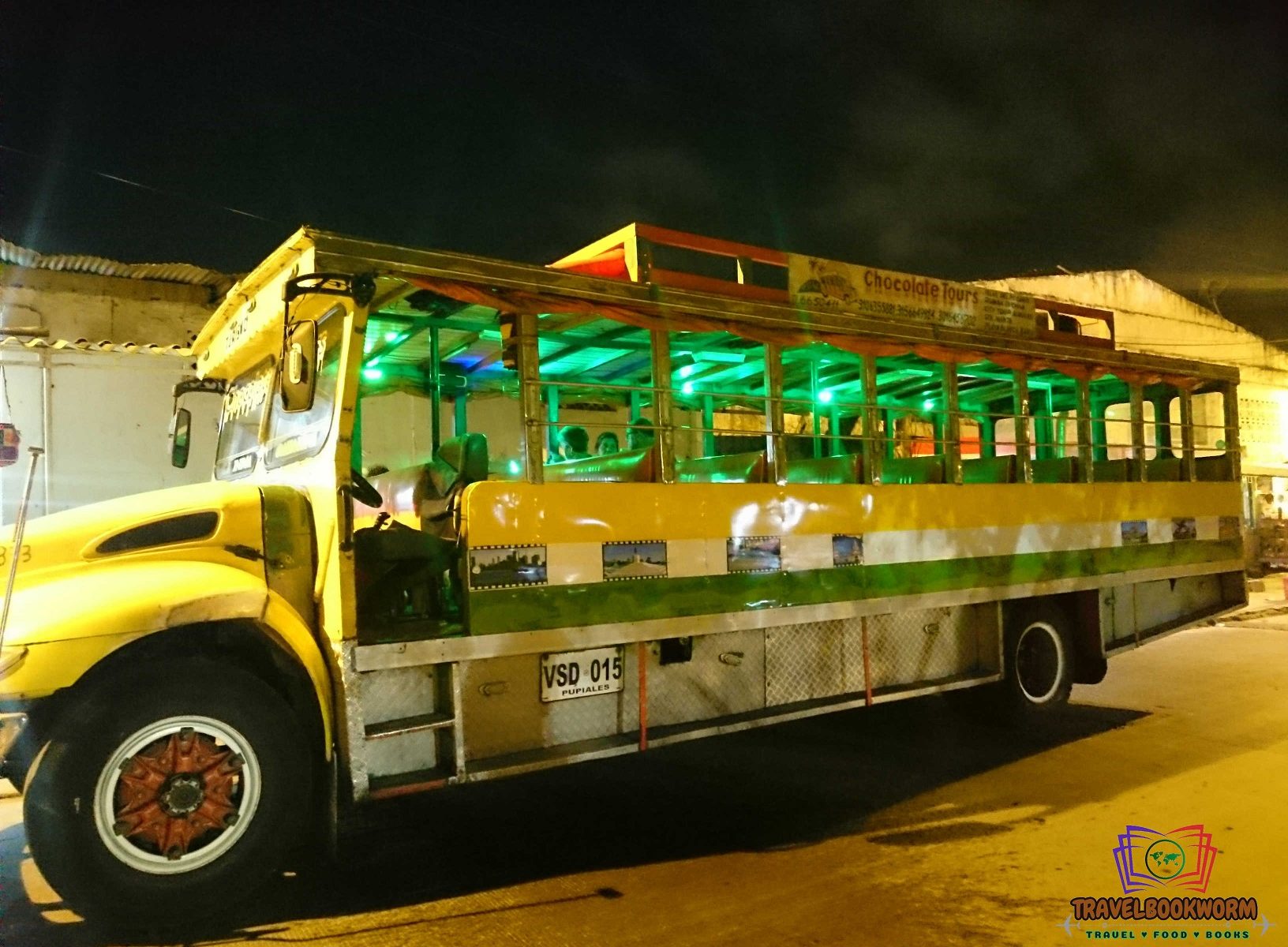 Cartagena is the most famous city in Colombia with its main attraction being the historic old town surrounded by the city wall. Located on the northern coast facing the Caribbean sea, about 1,000km away from Bogota, travelling by air only takes about an hour.

Taxi from home (Chapinero Alto) to the El Dorado airport cost 19,000COP. The queue for check-in with Viva Air was long. We made a mistake for not checking-in our flight online and ended up paying 66,000COP for it. The security check for flying the domestic plane was next to nothing; you can bring your toiletry for content more than 100ml, coffee, water and probably food.

There’s no security check upon exiting the aircraft, we walked straight to the taxi counter, get a ticket, hopped into the first taxi (no queue) and arrived at the Hotel Caribe after 15 minutes. We paid the taxi fare of 19,000COP and proceeded to check-in into the hotel. They gave us a welcome drink voucher, but we didn’t use it. Our room located in Laguito building, it was about 2 minutes walk from the reception.

While walking toward the room, we saw a Toucan and later on realised that this hotel has a mini zoo housing deer and parrots.

In the late afternoon, we use the hotel facilities – Sauna, Jacuzzi and Steam room. It’s free to use for in-house guest.

At night, we went to Carbon de Palo. The food was lovely, right potions size, and a nice ambience with a live band playing traditional Latin songs at a low volume where we could still have a conversation.

After the meal, we walked along the main road and stopped by for a drink in a bar. While sitting outside, we saw plenty of vehicle past by with music on and people having fun inside. We thought of trying it out during our trip. When we moved on to another bar, while looking at the music vehicle, an old lady stopped us and started promoting us the package for the party vehicle under Chocolate Tour company. It’s called ‘Rumba in Chiva’ and this woman offered a package for 30,000COP per person.

She told us that it does not include food and drink. She seemed honest, so we didn’t hesitate to pay her the full amount for tomorrow’s tour. Once we finished the transaction, we moved on to the next bar, and I tried Coco Loco, it’s a Colombian Coconut Cocktail, famous on the Caribbean coast of the country. But I didn’t quite like it because it has a strong taste of liquor; felt like drinking milk with Vodka.

The next morning, we had our breakfast by the pool, and there’s plenty of bird around trying to snatch our food. I didn’t find it annoying, but quite amused by it. The yellow bird was quite persistent than the crow. A couple of time it tried to snatch Mike’s Salami, and when it finally got a taste of it, it flew away without a second glance. Probably disliked the taste.

Once we filled our tummy, we went to the Bocagrande beach located 150 metres from the hotel. While walking along the beach, often we were stopped by vendors trying to sell us things, few people were swimming, and other sun tanning. It wasn’t a pretty beach though.

After the walk, we just chilled out around the hotel compound. We planned to use the sauna facilities, but it was closed and only open at 5 pm to give away for maintenance. While sitting around the outdoor hotel lounge next to the Spa, we spotted a couple of parrots and sat next to it watching them chasing one another going round and round the chair.

It has beautiful blazing red, blue, green and yellow feathers, and it’s a curious creature. It inched slowly with the motive of stealing my flip-flop. But I didn’t realise until it was too late. We had to ask the hotel’s worker to distract it while I quickly snatch it back. It was hilarious.

After that, we didn’t want to sit with them anymore and moved to the poolside lounge. While Mike swam, I continued reading my book ‘Georgina Kincaid series‘ and had a dessert, Crème brûlée. It was yummy!

Before the night come for our Rumba in Chiva tour, we did some research on it, and honestly, we have a mixed feeling about it, as some of the reviews were pretty bad. We would have to play it by ear, and If we don’t like it, we’ll get off. Our meeting time was at 8 pm, but at 7:53 pm, the old lady that sold us the package showed up at the hotel. She lead us to the waiting Chiva, and when we get on it, the two rows seat in front had already been occupied. It’s about six people per row. Amazingly there were kids on board too.

While driving around the town to get the other passenger, the band start singing while playing the traditional musical instruments such as the Accordion, Maracas, Guacharaca & Tambora. When all the seats were taken, that’s when the MC start doing his job. He began by introducing himself, and I think his name was Hami. Then he asked where we all came from. There’s a few from Bogota, Chile, Argentina and Cali.

When Mike’s turn and he told them he from Inglaterra, they booed him! But it’s okay because we already expected to get that kind of reaction following the FIFA world cup defeat. Nevertheless, they still treat us with open arms. The lady who sat in front of us told us about the beer pricing as she didn’t want us to get cheated by the vendor that selling beer outside the vehicle.

They distributed one bottle of liquor and a bottle of Orange juice in every row. They also gave each one of us a plastic cup and placed the Ice bucket in the middle of the seat for sharing. We still get free flow of the drinks throughout the ride, but I thought the lady told us that drink wasn’t included?

Other than drinking, we get to see the view surround us; there were singing and activity like dance competition by the two sexy girls representing the two most prominent group – Bogotan and Caleño. The MC also explained the history of each place whenever we drove past it (in Spanish of course).

We stopped for a break for about 45 minutes at Monumento a Los Zapatos Viejos; it’s in the old town next to San Felipe Fort. Next to the bronze Old Boots sculpture (a tribute to poet Luis Carlos Lopez), buzzing activities happening such as singing, dancing, and food and drink selling.

The last stop was at the Getsemani. Our MC lead us to one of the clubs named Taboo. He told us that we could stay longer at the club if we want to go back personally by taxi. Otherwise, we need to get out of the club after 1 hour.

The club was already in full swing when we got there at 10:40 pm, we couldn’t even get a seat. They didn’t have a draft beer, only bottled beer.

The people on the table next to where we’re standing gave us a free shot of Aguardiente too! I enjoyed my time there, it was fun watching them dancing, and I absolutely love the music!.

When our times up, we went out and looked for our ride, but couldn’t find it. We saw our MC, and he directed us to another bus from a different company. It probably doesn’t matter to them exchanging passengers by the end of the day. On the bus, a friendly local people sitting next to us interview us. But it’s only a short ride, so we didn’t get to talk much. We reached the hotel at 12:20 am.

The next morning, we missed breakfast and went for brunch. It was raining the whole afternoon, so we didn’t go anywhere else but use the hotel facilities. Tomorrow, we will leave this New City and stay in the Old City. This few days had been wonderful, and I’m happy that we took the Rumba tour last night, we had so much fun!