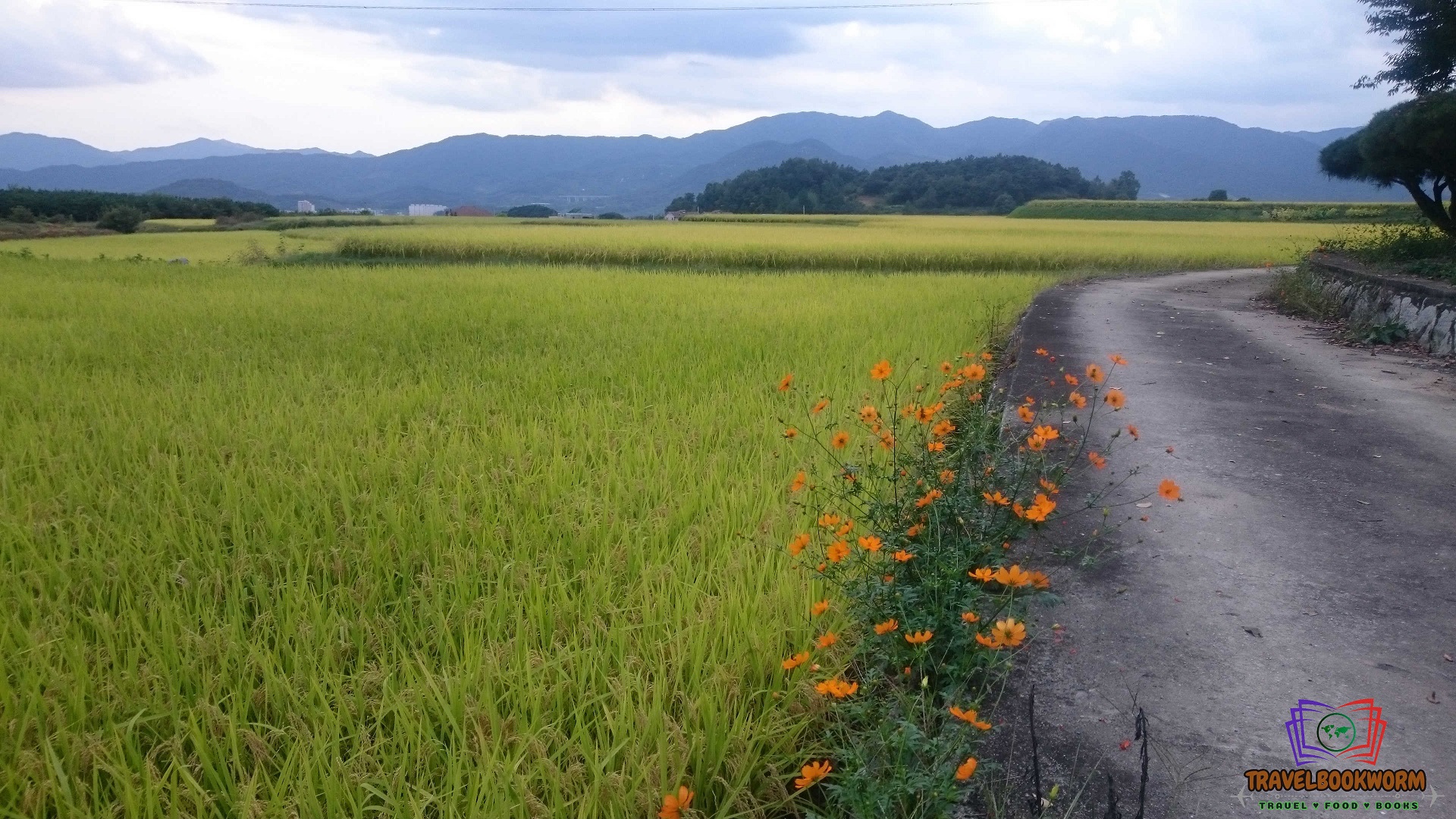 My first mountain hike in Korea happened to be in Jirisan National Park. It has been quite a while since I last did an uphill hike. I remember how tiring it was to climb Mount Kinabalu back in 2000 and that was 17 years ago when I was still young! But this mountain wasn’t that high so, it shouldn’t be any problem right 😃.

We started planning our trip two months ago when Adam confirmed his visit to Korea. However, the train tickets were booked one month before the travelling date due to the online booking condition set by Korail. We were quite worried about not getting any tickets due to travelling during Chuseok’s long holiday. But everything turned out to be okay.

When we arrived at Gurye station, we look for a place to eat, and I was surprised to see there were many seafood restaurants around the area. It’s not that this place is next to the sea. The one we chose has a friendly staff and a fantastic view of the Seomjingang river and the Guryegyo bridge. The restaurant is located just in front of the convenient store next to the station.

We ordered seafood soup, and it has plenty of shrimp and crab. We also given with many side dishes and one particular side dish that catches my attention was the Acorn Jelly. It looks nice, but it wasn’t my cup of tea. While having our lunch, we asked one of the ladies about the taxi fare to the hotel, and when she told us the price, we were quite happy with it as It wasn’t expensive than we thought it would be. She then called a taxi for us, but when the driver came, we hadn’t finished our lunch yet. So the driver left, and once we were ready to go, she took us to the taxi stand and talked to the driver that we need to stop by Paris Baguette on the way to the hotel.

During checked in at Jirisan Park View Hotel, the reception told us that there was some problem with our reservation that we booked thru Agoda. They said that we made a mistake and booked the other room without a bed which means the Ondol room. We double-checked our booking, and it showed the same category of the room at the same price. It must be Agoda or the hotel made a mistake. Adam didn’t have a choice but agreed to move to another room on the 2nd night. Although the hotel did upgrade him to a bigger room with a kitchenette the next night, it wasn’t convenient considering he has to move to a different room on a different floor carrying his suitcase in a staircase. (There’s no lift in the hotel).

In the hotel, there’s a cute little white dog named ‘Samchun’. When we first arrived at the hotel, he kept barking at us. But throughout the rest of our stay, whenever he saw us, he wagged its tail and even let us touch him.

On our first evening, we spent time walking around surveying the places near the hotel.

There are plenty of restaurants around. However, due to the long holiday, most of it was closed. If we didn’t get our ready-made sandwiches and bread from Paris Baguette in town earlier on, I don’t think we could have breakfast during our stay. The hotel doesn’t provide the service, and we couldn’t find any convenience shop like 7Eleven or GS25 around the area.

The breathtaking view from our balcony featuring the mountain and the stream of Masancheon. I felt great to be surrounded by nature; it was refreshing and peaceful! At night, we left the balcony door open and listened to the water sound lulling us to sleep.

The next morning, once we had our breakfast, we began our walk at 9:30 am from the hotel towards Hwaeomsa Temple. The distance is about 1 km away. After walking for about 7 minutes, we came across a checkpoint where we need to pay the entrance fees of 3,500 won each. By 9:52 am, we reached the temple and had a quick look around the place.

According to history, an Indian monk named Ven. Yeon-gi founded the temple by back in 544 C.E. However, during the Japanese invasion in 1952, most of the structure was destroyed except for the stone pagoda and lantern. But regrettably, I didn’t take a picture of it.

At 10:10 am, we crossed the bridge towards the parking lot opposite to the temple, that’s where the trail starting point is located. We chose to walk the trail to Nogodangogae(pass) which is 7 km away.

At the beginning of the trail, it was an easy walk and quite relaxing.

You will encounter the only cafe that can be found on the trail and located in kilometres 2. Make sure to re-energize, get some refreshing drinks because the real uphill hike will begin at about 800 metres away.

It was a rocky trail, and it made me think that it probably used to be a river a long time ago.

Along the way, we often came across notices about the black bears and what to do when encountering one. I’m not sure whether to feel relieved or disappointed because the only animal that we saw were chipmunks. However, I do realize that if we did encounter with one, it would be dangerous as the Asiatic black bear are known to be aggressive and tend to attack human.

During the 6km walk, we only saw about 15 people, and they were all descending; we were the only ones ascending, and that makes us thought back about the conversation we’d had with some local guy last night. He seems to be amazed that we planned to walk up. I think the locals are only hiking the trail down?

When we finally reached the clearing, which was the main ridge of mount Jirisan called Munenggijae Gogaetmaru, it was noticeably cooler and I felt like stepping out into a different atmosphere. For about 2 hours 40 minutes, only the crunch of our footsteps accompanied us along the journey, but here, there were countless hikers!

We were feeling tired and hungry, but there’s still 1.1km to go before reaching our final destination. Luckily, the path from this point onwards is flat and therefore it was easier to walk. I think that’s why this track is called the comfortable trail.

Upon reaching the Nogodan shelter at 1:13 pm, the smell of bbq wafted to our nostrils, and it makes us even hungrier. At this point, we were thinking of getting a meal no matter how much it costs. We followed the smell, and it led us to a room but only to be left disappointed. It wasn’t a restaurant. Instead, it was a bbq place where you need to bring your own and bbq it there.

On our journey back, Mike was complaining about his eyes seeing a black dot and worried that he was getting a migraine, so, we quickened our pace down the path to Seongsamja which is about 3 km away. When we get there, we looked for a taxi and were lucky to find one immediately. The winding road down the hill kind of reminded me of Genting Highland road. The taxi didn’t use a metre, and we tried to haggle down the price, but he insisted on 34,000 won. Honestly, it was expensive considering the distance. But we were just happy to be back in the hotel so that Mike could have his rest.

Since Mike couldn’t eat for another few more hours, Adam and I went to a restaurant located just about 30 metres away from the hotel. I ordered the fastest meal they could serve us which was Paek Pan. It came with ten side dishes and a pot of soup. One of the green vegetables reminds me of Myanmar dishes, and I was sure it was tea leaves. The price was a bit high compared to the one we usually had back in Seoul. Here, the price was 9,000 won and back in Seoul; it was about 7,000 won. The same goes for the rest of the meals we had here; it was slightly expensive.

By evening, Mike has recovered from his migraine, and we went to a bbq restaurant and ordered 삼겹살. It was our last night with Adam as he’s leaving for Busan tomorrow.

Earlier on, we had asked the hotel reception about buses going to Busan, and we were told that there’s a bus going directly to Busan from the bus stand in front of the hotel. However, Adam waited there in the morning, and the bus didn’t come. He has to travel to Gurye terminal bus to get one. It’s probably because of Chuseok; I wasn’t sure.

We also went to the bus stand to wait for a bus to Gurye Town for lunch before heading to the train station. However, according to the bus schedule written on the wall, the bus won’t be coming anytime soon. So, we went back to the hotel and asked the hotel to call a taxi for us. When we reached the station, it was raining so we couldn’t wander far. We had seafood soup again, but this time, we had plenty of time to enjoy our lunch.

At 1 pm, it was time to board the train and say goodbye to this beautiful countryside. After a few days of hectic activities, it’s time to relax, read a book and watch the view goes by. And that’s when the sense of tiredness was slowly creeping up to our body that forced us to cancel our dinner gathering with our beloved friend Debbie.

These were the stations and time that KTX & Mugunghwa stopped during our journey:

The purpose of taking the much slower train, Mugunghwa instead of KTX is for us to see if there’s any exciting place we could go next time. The train left on time but arrived Yongsan 17 minutes later than scheduled and to top it off when we tried to get a taxi, the queue was unbelievably long, and we ended up queuing for about half an hour.