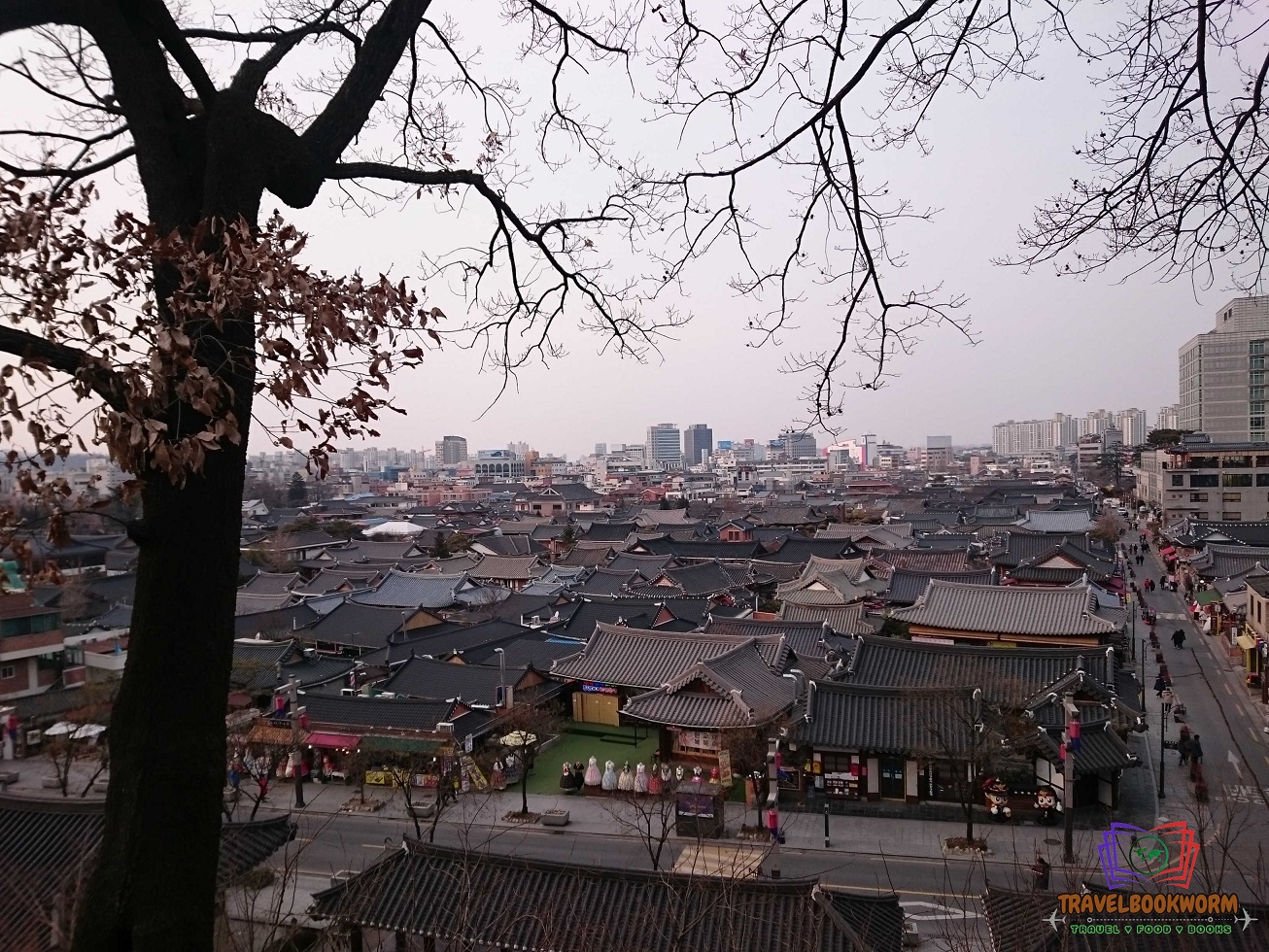 Three months ago when we took the train down to Guryegu for hiking, we saw many people getting off in this station called Jeonju, and they were all looking very excited about it. I was intrigued by it and did some quick google search on that place, and I’m glad I did that. Jeonju has over 800 traditional Korean Hanok houses clustered in one area, and it’s a great place for a weekend getaway. But we couldn’t immediately arrange for a visit because we have already had a travel plan in November and December so, it would have to be in January.

The Journey with Mugunghwa Train

Nine days before travel, we booked the train ticket from the Korail website and also accommodation from Agoda for our one night stay there. Since we had already decided that we will move out of Korea this May, we thought of trying out sleeping in the Hanok house.

Along the journey, we saw floating ice on Han River, frozen drainage, some parts of the hilltop covered with snow and some areas of the paddy fields had plastic frost cover shielding whatever they’d planted from the cold weather.

We stayed at Saekdong Jeogori Hanok Guesthouse Jeonju, this guesthouse located near to Namcheon bridge. The owner of the house was very generous to us she upgraded our stay from Double Ondol room to a Family room. She was helpful and friendly, but she had forgotten to let us know the padlock combination. When we left for a walk, we ended up sliding the door without locking it.

This arched bridge with a hipped and gable roof connects Gyodong Hanok Village and Seohak-dong. Located at the upper reaches of Jeongjucheon Stream, it measured at 82.5m in length and 25mm in width. Nicknamed as Eyeglasses bridge because of the five windows. This bridge built of stone in the 14th year of King Jeonjo’s reign in 1790. However, it was repeatedly destroyed and re-built over the years. In December 2009 it was finally fully restored.

After winning against Japanese invaders led by Ajibaldo in Unbong Hwangsan of Namwon, on his way back to Gaegyeong, Yi Seong-gye (King Taejo) hosted an outdoor banquet for his family in this place. He also recited the Daepungga song that Liu Bang, founder of the Han Dynasty, once sang as an expression of his ambition to find a new country of his own. There is also a monument inscribed with King Gojong’s calligraphy on the grounds.

One of Korea’s three major Catholic churches, along with Myeongdong Cathedral in Seoul and Kyesan Cathedral in Daegu. The scenes from the Korean movies called “A Promise” and “The Taoist Wizard” was filmed in here.

We flagged down a taxi from the roadside near the church and told the taxi driver to take us to Yetchon Makgeolli. The restaurant packed with people, and we couldn’t get a table, so we went to the one at the opposite, 전주감나무골막걸리.

We thought of having another Makgeolli set in Yetchon, but we still couldn’t get a table. We gave up and went for a drink at the bar next door. The Cass draft beer for 500cc here cost 3,000 won per glass. We had a few glasses then headed to 5.5닭갈비전문점 for our last meal of the day.

The Dakgalbi here still tasted the same as the one near our house, just a little bit spicy. They also gave us free blood sausage (순대), and you can have the free ice cream once you settled the bill. With -5 temperature outside, I couldn’t be greedy, so I just took two scoops of ice cream.

It was a real challenge waiting for a taxi in freezing temperature, especially after finishing the ice cream, ten minutes had felt like thirty minutes. When we reached the Hanok village at about 9:30 pm, the place was dead silent. That night, I read The Guardian Series while getting familiar with sleeping on a thin mattress. I noticed that a little brush of my skin on the silk surface produced a static and a spark of light.

The next morning, we left the guesthouse without saying goodbye to the owner. We couldn’t wait until 11 am (the checkout time) because we still have other places to explore.

On our way to see the Old Ginkgo tree, we stopped for breakfast at this lovely place called 애담찹쌀떡. The Dried Persimmon in rice cake 곶감찹쌀떡 and Strawberries in rice cake (딸기찹쌀떡) were yummy.

This tree is a living witness to the Choson Dynasty’s five hundred years of rising and falling fortunes. It also symbolizes Chonju’s position as a centre of Confucianism in Cholla Province.

Enshrined in this place is the portrait of King Taejo and other features monuments such as Jogyeongmyo, Jeonju Sago (historical archives), and Taesil (The Placenta chamber). This place is well preserved and uses as a location for historical drama and movie filming.

Free admission to this place for children ages 6 or younger, seniors ages 65 or older and people with disabilities. It’s also free to enter during new year’s day, Seollal, Chuseok, Independence movement day and National Liberation day. However, this privilege does not apply to foreigners.

A place to store ‘Sillok’ – Published records of the previous Kings’ daily administrative affairs. Besides 784 volumes of Sillok, there are other books stored in this Sago.

South Korea’s only remaining portrait of King Taejo, the founder of the Joseon Dynasty. In this full-length portrait, the king wearing an Ikseongwan (official hat of the king) and a Gollyongpo (formal robe of the king), as well as Baegokdae (White jade belt) and Heukhwa (black shoes). The rode has a five-clawed dragon design, a symbol of the king, emblazoned on the chest and shoulders. According to a historical record, King Taejo was tall and had a straight body and large ears. The portrait of King Taejo in his later years can be view in Gyeongijeon of Jeonju while his younger days portrait can only be view in photographs unless you can go down to Junwonjeon Hall in North Korea.

The Journey with KTX Train

We thought of getting home a bit earlier, so we went to the ticketing counter and asked for the KTX train. Our original ticket cost 35,200won, and we had to pay extra of 33,600won for the exchange.

Our carriage number 18 located at the far end, there’s no place to sit and to take cover from the freezing temperature while waiting for the train to arrive. Although the temperature was only -2, with the breeze, it felt much colder. We also had to endure another four minutes extra waiting in the cold due to the late arrival of the train. However, they managed to make up for the lost time and somehow arrived in Yongsan station 3 minutes earlier than scheduled.

The Cost for 1 Night Weekend Getaway in Jeonju

Two persons cost roughly around 288,828won based on our spending. The breakdown as follows: