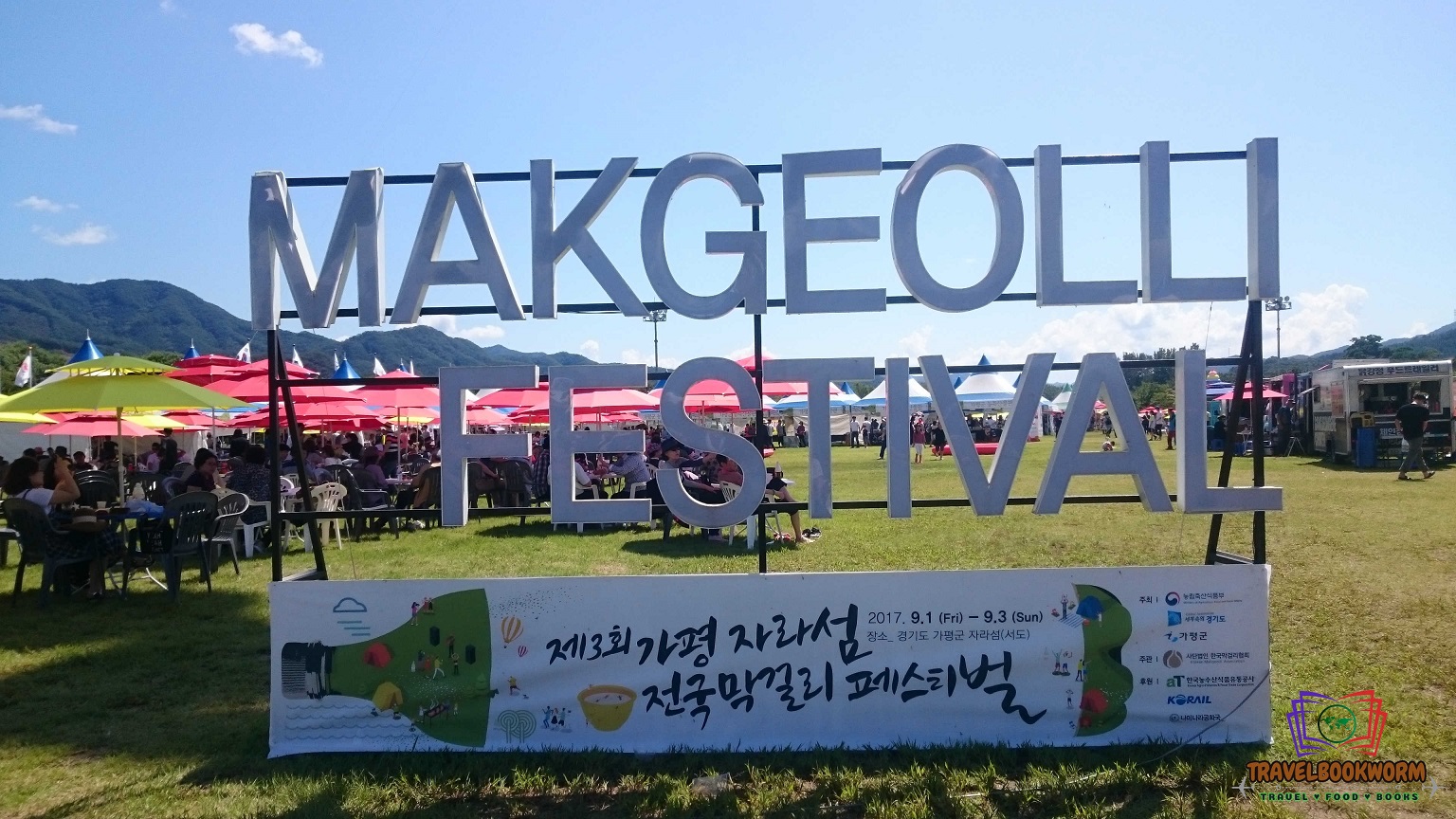 Makgeolli Festival is held yearly in Jarasum Island located in Gapyeong County of Gyeonggi province. This venue is also where the International Jazz Festival took place in every autumn. For those who anticipate the event, this year it will be held on 20th ~ 22nd October. On this trip, we went together with Liam, the Makgeolli king and his other half, Hyunnah. They brought along a cooler bag to store Makgeolli and also a picnic mat.

We were lucky to get shaded seats that come with a table. In this early autumn, you can still get a sunburn when exposed long enough. Mike and Liam off to hunt for Makgeolli while Hyunnah and I sat there enjoying the beautiful view of the countryside. I love the blue sky and the thick clouds resting near the hills. It was a stunning view.

When the boys came back with a few bottles of Makgeolli, it was our turn to explore the event. We tasted a couple of Makgeolli in some of the booths and then headed to the food truck for some food to take away.

There were a few selections such as Fried Chicken, BBQ Pork, Beef Steak, Hotdog, Turkish Kebab, and others. I settled for a BBQ pork, and Hyunah chose Beefsteak and Kebab. Before heading back to our seats, we went back and purchased the Tomato Makgeolli we had tasted earlier. It costs 3,000won for two bottles. So, we tried the other two flavors and decided to get the regular rice wine as the Ginseng Makgeolli was too herby for us.

Upon reaching our seats, we noticed that an additional person was sitting in our place. A local Ahjussi was happily talking and laughing with the boys. Later on, we heard the story of how Liam has invited him to joined them and that he travelled alone from Incheon for this festival. He stayed with us for about an hour before leaving us when the boys were out to get more Makgeolli.

There was also soldier booth and I guessed it’s for the civilian to have a better understanding of living life as a soldier.

The other activities that took place in the event was a Makgeolli drinking competition (with straw), shooting water gun with each other, but instead of water, they filled makgeolli in it. Having sat there for nearly 4 hours, the most repeated activities on the stage was the dance of Makgeolli song. When we first heard it, all of us burst out laughing at the lyrics where they had changed Macarena to Makgeolli. Nevertheless, it was quite entertaining.

When we first arrived, I was wondering why there were less Makgeolli booths than to my expectations. It never crosses my mind that they probably had run out of stock. But when I see some of them left their booths at 2 pm, I realized that today was the last day of the event which was being held since 1st September, and I guessed some of the sellers must have sold out their product on the very first day or second day of the event.

We’d had enough of the crowd and decided to move to a much more peaceful area not far from the event. We chose a place next to a ‘pond’ overlooking hills, and occasionally we saw a train passed by. It was an excellent spot for a picnic, and we stayed there until 5:30 pm.

We took a taxi to the nearby town and had a few drinks & meal at 못난감자앤치킨. We then spent the last hour at a “Noraebang”, Korean Karaoke room where Liam showed off his singing talent.

Initially, we planned to stay out just for a few hours, but because we enjoyed it so much, we had stayed out for almost half a day! Before we called it a day, Mike and I went to a Chimaek place near us and continued drinking and eating! For the record, I didn’t drink much of Makgeolli and beer as I was a bit under the weather. So yeah, no hangover for me the next day!

Note:
It was during Hyunnah and I went out for Makgeolli tasting, and food hunting that my phone received a breaking news alert from the Guardian about North Korea has conducted its 6th nuclear test.