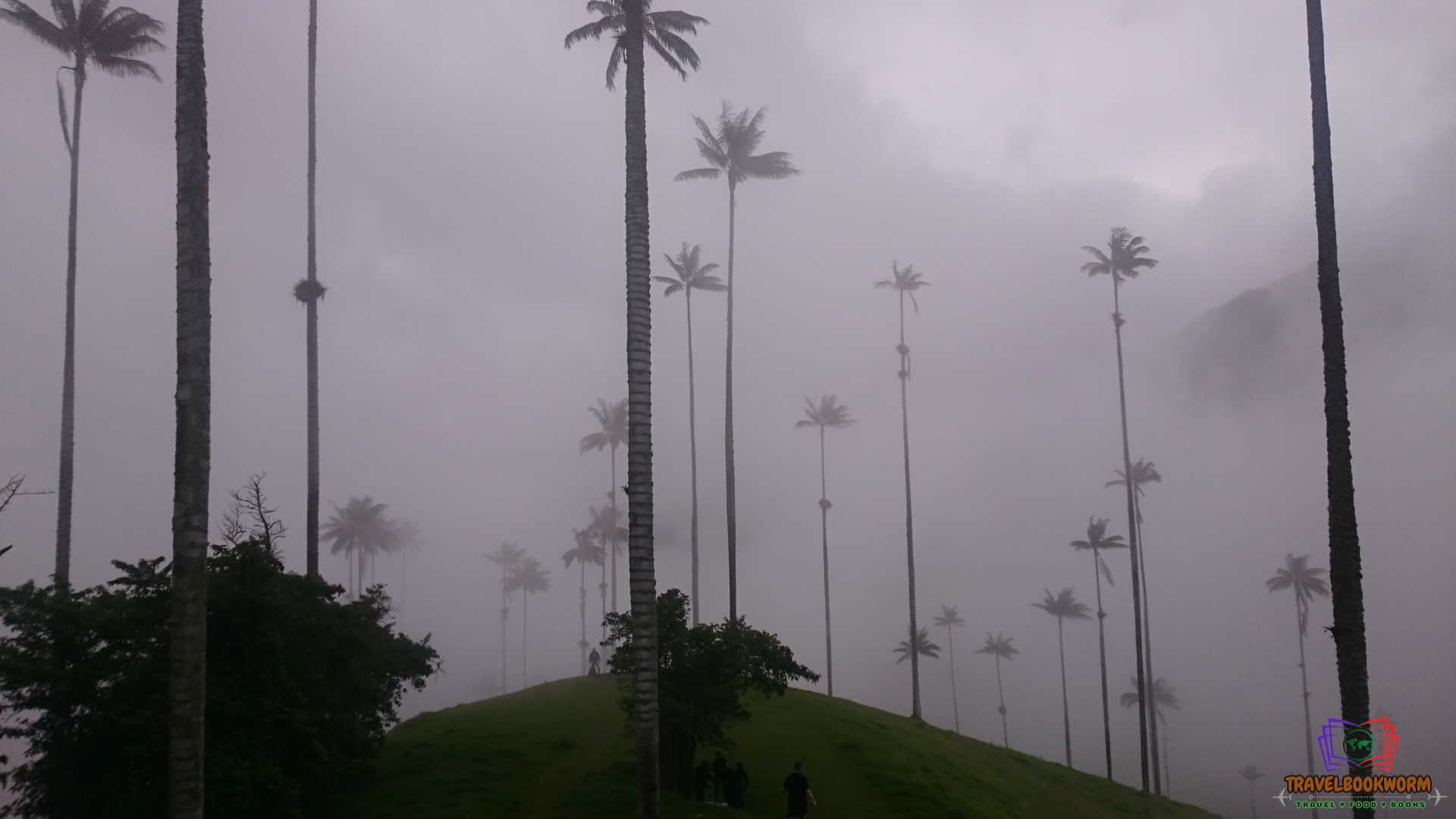 Cocora Valley is one of the places one must-see when visiting Colombia. Set amid the misty green hills, Palma de Cera (Wax Palm) is breathtaking to behold. This Colombia national tree can grow up to 60 metres tall, and it’s the tallest in the world.

Getting to Cocora Valley from Salento

Most of the online article that I read stated that to get to Cocora Valley from Salento, you can ride the Jeep / Willys from the main square. However, when we went there to get the ride, we didn’t see any vehicle stationed there.

I’m not sure if it’s temporary relocation due to the Semana Santa week or if it’s permanent. We asked several people for the direction before we finally got to the right place. It’s located at Carrera 3 Calle 3, or in a google map search for La Bonita de Salento Hospedaje.

When we got there at 9:20 am, there were already many people queuing for the ticket. Thankfully, not all of them heading to Cocora as some of them were going to Palestina Fincas Cafeteras.

We thought of going to the Coffee tour tomorrow, but still not too sure of the plan because we’ve already experienced a coffee tour back in Bali. We assumed the process would be the same?

The return tickets to Cocora cost 8,000COP per person, and it didn’t take a long time to get the Willy full. (2 in front + 8 sitting at the back + 3 standing)

The ride was about twenty-five minutes, and before reaching our destination, the driver played an audio recording about introduction of the place, the animals, plants as well as the rules & regulation.

The Hike to Acaime

There’re plenty of little stalls along the road to Cocora Valley trail where you can buy food, drinks, fresh ground coffee, souvenirs or rent a horse. Before starting our walk, we bought some takeaway sandwich from a stall called Delicias Cocoro and plan to eat it when we find a suitable spot. I didn’t have any breakfast that morning, and my last meal was at 4 pm yesterday. However, I didn’t feel hungry at all.

Our plan for that day was to do anti-clockwise hike by going up to Acaime and then finish it at the Cocora Valley. However, during the simple registration at the blue gate where the attendant asked our nationality and places we planned to go, he told us the bad news that they’d closed the loop route for some maintenance!

We’re quite disappointed with the news, but there’s nothing we could do to change it. He also told us not to be friendly with any dog if we encounter them during the hike, it’s to prevent them from following us to the forest and hurt the animals reside in there.

We started our walk at 10:15 am, walking past a trout farm, a junction to Finca San Jose before reaching to the entrance.

The attendant collected 2,000COP each and put a band on our hand. The first part of the trail was through grassland and wax palm. I especially loved the view from this point until before we enter the forest. It was so peaceful, and I felt like walking to a wonderland.

This part, the path also well maintained as it’s divided into two, one for the horses and another one for human beings.

It was unquestionably stunning with the vast greenery, cow and horses grazing the grass, the Andean Condors flying high above the sky and the tall Wax Palm dotted the tops of mountains.

The second part of the trail was through the cloud forest, and that’s when the real hike began. Walking up and down the hill, shared the path with the horses with its dunk everywhere, some of the trails were muddy, and some with shallow running water, but overall the trails were good to walk.

Some of the animals and birds species that live in this forest are Cougar @ Puma Concolor, Tayra @ Eira Barbara, South American Coati @ Nasua Nasua, Andean Guan @ Penelope Montagnii and Slaty Brush-Finch @ Atlapetes schistaceus. We didn’t see any of these animals during our hike there.

After crossing over six small rickety bridges and one with just logs thrown across the river, we finally arrived in Acaime, the hummingbirds’ sanctuary.

It took us two hours to reach this point. The entrance to this park is 5,000COP per person. A few of this tiny little bird flying around the compound, and we thought that’s enough, and we didn’t need to go inside.

We didn’t stay there for long and left the place about ten minutes after we’ve arrived. At this point, I started to feel hungry, and plan to have the sandwich on the way down. However, halfway on our journey, it began to rain. Thankfully we’ve already crossed over all of the bridges. I couldn’t imagine crossing the river when the planks were wet!

Whenever we got to bridges, we have to queue as only one person allowed to use it at a time. The handrails of the bridges were rusty, and I was worried about getting tetanus after the prick on my finger. I couldn’t remember when the last time I had the vaccine shot. Probably over twenty years!

Ninety minutes later, we arrived at the trout farm. I suggested stopping for late lunch here while waiting for the rain to stop. I was so hungry that I could eat a horse at that moment, and I couldn’t wait for the meal I ordered, a grilled Trout.

While waiting for our meal to be ready, we watched a few Andeans condors trying to catch fish at the farm. Some of them perched on the branches above. Finally, when the meal arrived, I devoured the whole fish in less than 7 minutes.

Compared to the one I had yesterday in the town, the Grilled Trout was very delicious. Anyway, I was proud of myself for the ability to finish the 13.6km hike without eating anything for 22 hours, and I didn’t even finish the 500ml bottled water!

The Walk to Forest of Palms

After replenished the lost calories, we continued our walk to the Forest of Palms, Colombia’s national trees. The road was busy with humans and horses. After about 400 metres walk, we arrived at the checkpoint where we needed to pay the entrance fees of 3,000COP. Once we were inside, it was another 1.7km walking up the hill before reaching the Mirador viewpoint 1.

There’s another viewpoint further away about 2.3km, but I couldn’t go there as my trainers barely surviving the walk. The outsole of my left trainers came undone, and it was quite a challenge walking down the steep hill.

The view of the Palma de Cerra (Wax Palm) shrouded with the cloud was quite surreal. Otherworldly, I thought, and it made me felt like in the Jurassic world. These Quindío wax palm can grow up to 60 metres / 200 feet.

After the marvellous excursion, we walked back to catch a ride to Salento, but we weren’t alone. A black dog walking side by side with us to the Jeep. When we were about to leave the place, he made a crying sound, and when the vehicle moved about 10 metres away at a slow speed, the dog made the bold move by jumping to the jeep.

We didn’t know what to do at first, and the driver seemed not concerned about it. The dog also seemed determined to leave the place with the car, and he’s actually bleeding. After a short discussion, we agreed to let the dog onboard. What made us hesitate to let the dog in was that we didn’t want to take him away from his owner.

When we got back to Salento, the dog didn’t immediately jump off from the jeep. He looked unsure, but the driver managed to shoo him away. He took off and followed the other couple from the same vehicle. He’s kind of reminded me of the movie called a dog’s way home, and I hope he would be fine. We also promised to feed him if we see him in town, but we never see him after that.