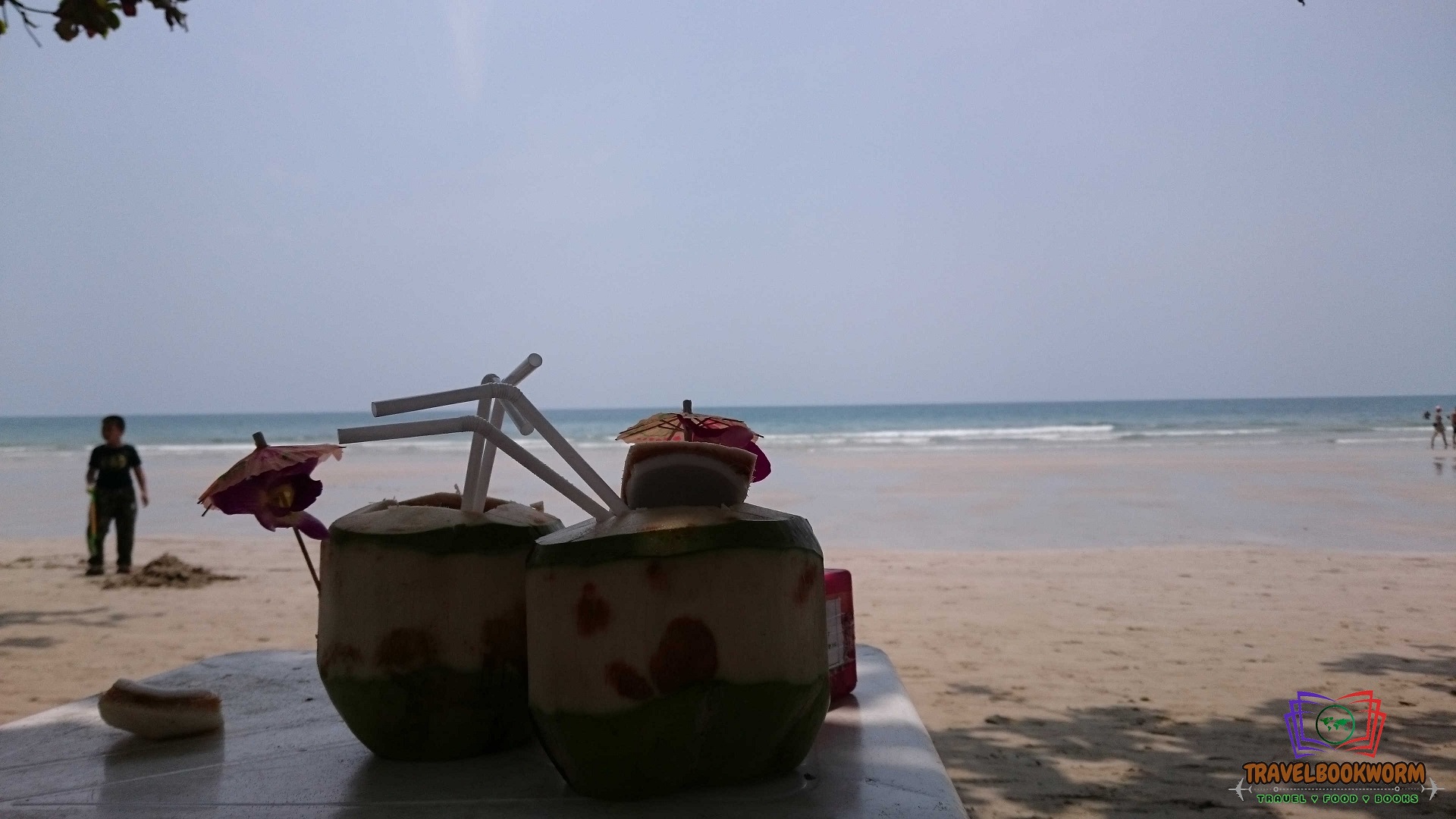 My flight from Kuala Lumpur landed at 5:15 pm, and I thought I’d be able to meet up with Mike at about 7 pm. However, I was wrong, and I spent 40 minutes queuing for immigration clearance. The journey in a taxi also took about 2 hours to get to Amora NeoLuxe Suites in Sukhumvit due to the traffic-jammed.

To top it off, my taxi driver didn’t know how to get to the hotel. He drove to the area and called the hotel for a direction. However, by that time, he’d already driven past it, and because he didn’t want to turn around, he asked me to walk to the hotel! Thankfully, it took me only 10 minutes walk to the hotel.

By the time I reached the hotel at 8:30 pm, my in-laws were already waiting for me, and they helped me get an extra keycard from the reception for Mike’s room. Once freshened up, I went down to meet them, and we walked to Robin Hood bar to meet with Mike before getting a taxi to Sabaijai Gayang for dinner.

The next morning, by the time we went down to the reception and checked out from the hotel, the driver for the private transfer that we’d booked through IamKochang website had already arrived and was waiting for us at the hotel’s parking lot. The price for a return journey was 10,000baht for a door to door service. The van’s seats were leather, and the ceiling was high enough for me to stand. It was a ten seaters van and with only five of us, there was plenty of space left to ourselves.

There’s signage prohibiting smoking and also alcohol on the ferry.  But some of the passengers ignored the warning and kept on drinking beers throughout the journey. The ferry’s drinks counter doesn’t sell it though; they must have bought it from the shop near the pier.

The Hotel and Its Surrounding Areas

We spent six nights in this spacious Deluxe Seaside room. The room has a seating area which was next to the bed. The bathroom with a separate shower and a bathtub. The balcony with a pool view, and if it wasn’t because of the trees, we could see the sea too.

When we first got to the room, I didn’t realise that our television was not working until I had finished unpacking our backpack. If I had known earlier, I would have asked for another room.

The maintenance guy couldn’t immediately fix it immediately, and only be able to fix it on the third day when we came back from a hike in Klong Prao. The Wifi connection in the room wasn’t great though; we did get it, but it was very temperamental.

The hotel doesn’t have a beach—border with only a cement wall down to the sea. The water wasn’t deep unless you swam slightly further away from the wall.

To get to the White Sand beach, you could either walk on foot by the main road about 15 minutes or swim over from the hotel just like we did. The sandy seabed helped to make the crossing more comfortably. There’s some part where the water was deeper and some were shallow. So, whenever you feel tired from swimming, you could always walk.

* The seabed nearby the hotel was the resting place for Mike’s gold wedding ring. So if any of you – human/mermaid/merman/sea creatures find it, please let us know. The ring was engraved with “Jass & Mike 121214”.

There’re plenty of restaurants nearby, and we often go to the restaurant located just in front of the hotel. They have a great selection of Thai food at a reasonable price. There were a few grocery stores and 7-Elevens nearby.

You could have a beer in the hotel’s seaside bar, for a small bottle of Singha, it only cost 60 baht.

There’s plenty of bars in front of the hotel. However, we didn’t go there. We went to the White elephant bar or Paddy’s bar about 5 minutes walk from the hotel.

Some of The White Elephant food and drink price:

On our last night in Koh Chang, we had dinner in Sea Bar Restaurant at the White Beach. There was a fire show at night on the beach.

The Journey Back to Bangkok

The next morning, we headed back to Bangkok with only 4 of us in the van because Matthew had already left Koh Chang 2 days ago.

The traffic was a bit slow when we got closer to the city. However, we managed to get to the hotel just before it worsened. We thought of having a sunset dinner near Wat Arun, but the taxis that we flagged down refused to go to the area, so we went to our regular bar at Molly Malone instead.

The journey back to the hotel was hilarious. Mike flagged down a Tuk-Tuk on the opposite of the road, and we rushed to it and only to realise that it was a two-seater Tuk-Tuk. At first, we were hesitating, but then we gave it a try. Mike and dad sat comfortably on the seat while mum and I crouched down. We barely have time to adjust when it started moving. In that precious five minutes journey, we hold onto each other and were laughing all the way to the hotel. It was an unforgettable experience.

Flying Back to South Korea

The next morning after we had our breakfast in the hotel, we took a taxi to the airport, checked in and sat on the plane for five hours twenty minutes journey to South Korea. We arrived at the airport at 11:35 pm. A few days ago, we booked a ride from the Agoda website and mentioned that we required the pick up on 30th March at 12:15 am. We waited until 12:30 am, but the driver didn’t turn up.  We had no choice but to get the airport meter taxi, and the driver was driving like he owned the road, his average speed was 120km/h, and at one point, I saw the speedometer showing 180km/h!

Thanks to his driving, we arrived in record time. 40 minutes journey from the airport to the hotel around city hall to drop off my in-laws and then to our home in Hyochang. It’s inexpensive too, with midnight surcharge, the fare was 83,000won. It’s almost the same as what the Agoda had charged us. On that night, they even sent us an email thanking us for riding with them and asked for our feedback. The driver had mistaken our arrival date, because the next night, we got a call from the driver asking where were we. In the end, we got a full refund from them.