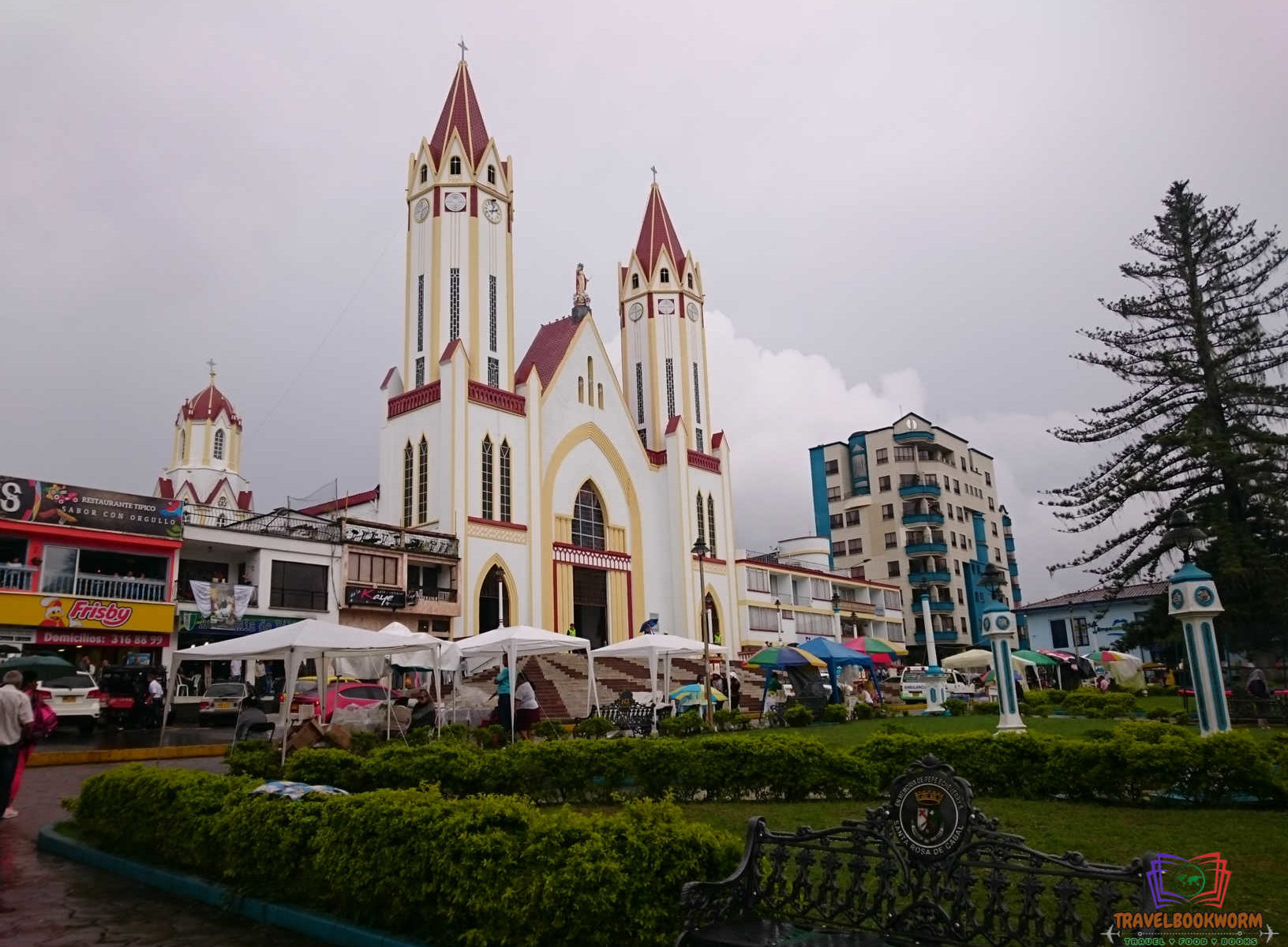 Founded in 1844, Santa Rosa de Cabal is a lovely town located about 40km away from Manizales, and 15km away from Pereira. This town, which is well-known for its Chorizo and Hot Springs is located at an altitude of 1,715 meters above sea level and with an average temperature of 19 °C.

We started our journey in Pereira, and since it wasn’t far from Santa Rosa, we thought of taking a taxi straight from the hotel Cafeira. However, when our ride came, a taxi we ordered via Tappsi Easy apps, he told us that he couldn’t drive us to the Santa Rosa because he didn’t have a permit.

We had no choice but to ask him to drop us at the bus terminal. The taxi cost 6,300COP, much more expensive than taking a bus to Santa Rosa which cost 2,300COP per person in a thirty minutes ride.

If I not mistaken, the bus to Santa Rosa de Cabal parked on level 2 on the terminal, and no pre-booked ticket needed. When we got on the bus, we’re the only two passengers on it, and thankfully we didn’t have to wait until it’s full.

We left the terminal not long after that with only the two of us, and the driver did try to get more on board, but he only managed to get two more passengers along the road that we drove past. On our way, I also saw San Vicente office and the bus stand, and I think that’s where the pick-up point if we’re going to the hot springs from Pereira.

This hotel located about 550 metres away from Basilica Menor de Nuestra Senora de las Victorias. We arrived in this hotel quite early at 11:20 am, and thankfully our room was ready. During the check-in, we asked them about the San Vicente Termales, and since they’re also authorized to sell the package, we didn’t hesitate to buy it from them. It saved our time from looking around the town searching for the same thing.

The hotel doesn’t offer breakfast services, but they have a communal kitchen where you can make your simple breakfast. The Wifi in this hotel was great, but the only thing I didn’t like was the mattress quality, it was hard to my liking, but for a night stay, I think it was alright.

This restaurant sells and also serve its own manufactured authentic Santarrosano Chorizo ​​since 1965. Their Chorizo made with selected meat using traditional recipes. They also contributed to the production of the 1,917.8 meters long Chorizo ​that obtained the title of longest Chorizo in the worlds for Guinness World Records on 5th March 2011.

This restaurant located next to Bolívar O De Las Araucarias Park, 450 metres away from the hotel we stayed. We had lunch here, and we loved our meal. I had Chorizo with passion fruit sauce (Chorizos al Maracuya), and Mistela Maracuya drink- passion fruit mixed with lemongrass and other herbs. Mike had Chorizo with beans (Cazuela de Frijoles), and Uvazo drink – Grapes mixed with Cinnamon and Cloves.

This park built in 1930 is the main one of this municipality, and it was only in 1989 that they installed the monument of Libertador Simón Bolívar in the centre. This park has steel benches, a large green area, and the pedestrian paths shaped like a diamond. Around the park, there’s food stalls, handicrafts, and souvenirs etc. The beautiful church, Basilica Menor de Nuestra Senora de las Victorias is just across from this place.

Located 100 metres west of the Araucarias parks stood two giants Machete and Peinilla with its length 4.5 metres, and thickness 1/2 inch, it’s the largest in the world. Both items were made of with the same material as the traditional Machetes, and weighing approximately 100kg each.

This place has a cafeteria, selling products based on coffee, fast foods, the traditional Santa Rosa chorizo, ice cream, information point, handicrafts of the region, and a booth selling the package for San Vicente Termales. It’s also where the meeting point for the bus to the hot spring located.

We bought the night package from the hotel we stayed and it cost 70,000COP per pax including a round-trip transport, dinner, refreshments, access to 6 thermal pools and 2 thermal steam rooms. It cost $55.000COP for children age 3 to 10 years old. We waited for the bus to come down the road next to Barrio La Estación Park.

The night package that we bought from the hotel we stayed cost 70,000COP per person. It includes round-trip transport, dinner, refreshments, access to six thermal pools, and two thermal steam rooms. As for children age three to ten, it cost 55,000COP.

Due to some miscommunication, we waited for our ride in the wrong place. Down the road next to Barrio La Estación Park, the area was quite dodgy, and we could see it the moment we arrived there. In front of us, a guy was smoking crack, at the park, a group of a teenager doing god know what, and next to us, an old lady smoking weed and the smoke wafted to where we stood while waiting for the bus that never came.

We stood there for almost an hour, and during that time some guy approached us and talked to Mike about how he loved the USA, but what he didn’t know was that Mike from the UK. It took him about ten minutes before he finally asked for some money, but Mike didn’t give him any, and he left after that. Not long after that, another man approached us, and I thought here we go again! However, he actually came to tell us that the place was quite dangerous and asked us to leave the area.

We followed his advice and walked further up. That’s where we met a gentleman who’d helped us calling the company, and another elderly guy who’s also around there took us to the correct waiting place at the Parque del Machete.

When we arrived there, we’re lucky that the bus was still there waiting for the passengers, and 6:00 pm sharped, we left the place. Getting out the town was quite tricky, and with the narrow gravel road, it took an hour for the 20.5km journey before we finally reached the hot springs. During the bus ride, our guide talked about the facilities, dinner time, rules et cetera, and also told us to gather at the entrance before 11:40 pm.

At the entrance, the worker put a waterproofed hand band on our wrist before handed us a bottle of natural mineral water each. It was about 3 minutes walk from the entrance to the locker room. The first thing we did was filling our stomach. The dinner served in a cafeteria-style with a choice of chicken or trout. The meal was alright, nothing fancy about it.

Before going to the pool, we changed our attire in the changing room, stored everything inside the locker, and took our towels with us. The rental of the locker with a padlock cost 2,000COP plus additional 5,000COP for the deposit. My only comment about the place was the queue for the locker service. I wished they have two lines, one for returning the padlock or getting their stuff, and another one for a new customer to rent the padlock. It would cut off the waiting time.

There were a few different pools of varying temperatures and a number of water features. During our time there, we managed to use the Thermal Steamrooms, and relaxed in pool 4, 23 and 24. The pool was odourless, and no hint of sulphur presents, which was good.

What to bring to San Vicente Thermal:

Thermal Steamrooms
Located one metre away from natural bubbles pool is this natural steam room. The vapour by the thermal water outcrops is excellent in allowing us to sweat and cleanse the body of toxins.

This natural thermal pool is 1.51 metres and located near the entrance. It has more than 50 geysers/outcrops on its soil, which offers a great benefit to health due to the great variety of bubbles of gases and minerals emanating from the bottom, and it has different types of temperatures. The running water stimulates the circulation and facilitates the purification of the skin, nourishing and revitalizing it.

Designed with two thermal pools for adults and the children, it has a mirror of water that has thermal jets. These pools contain Selenium which increases the production of endorphins that helps in the healing process, stimulates the generation of collagen, improves the body’s absorption of nutrients, increases metabolism, and generates total muscle relaxation.

(While we were there, we watch the full moon rising in between the two mountain, and it was beautiful)

This 1.28 metres pool is located almost at the end of the trail, above from the rest of the thermal pools in San Vicente. It contains millions of microorganisms, with high range of natural minerals, organic, and ion, which essential for health, wellness and beauty as it regenerated skin cells which prevent premature ageing.

P/s: Out of all the thermal pools available in this precinct, this was my favourite as it’s scorching hot, and it’s nice to be in it during night time.

We had our refreshment around 10:30 pm and the free drink was Aguapanela with a slice of cheese. I didn’t order that instead, I had a hot chocolate, and we also ordered the Chorizo Plate. It all cost 18,800COP.

*One thing I would like to suggest to the management is to put a public clock around the precinct. Most people leave their phones and watches inside the locker, and having the clock would help keep people on track.

The bus parked at the corner, and only came to take us exactly at the scheduled time. The drive back was smooth as there’s no traffic at all, but still, by the time we reached the town, it was already 12:40 am.

They dropped us at Bolívar O De Las Araucarias Park, and while walking to the hotel, the streets were eerily quiet. We’re actually still thinking of the dodgy person we’d encountered earlier, and worried if we’ll see them again. Thankfully though, we arrived at the hotel safely.

After last night’s meals, we didn’t feel hungry at all when we woke up the next morning. We skipped breakfast, and just had hot drinks from Triple C while trying to find out the direction to the bus stand for our next destination, Manizales. Our last destination for the Semana Santa holiday.

P/s: I quite like Santa Rosa De Cabal compared to Pereira, and wished that we skipped Pereira and stayed here for two nights!