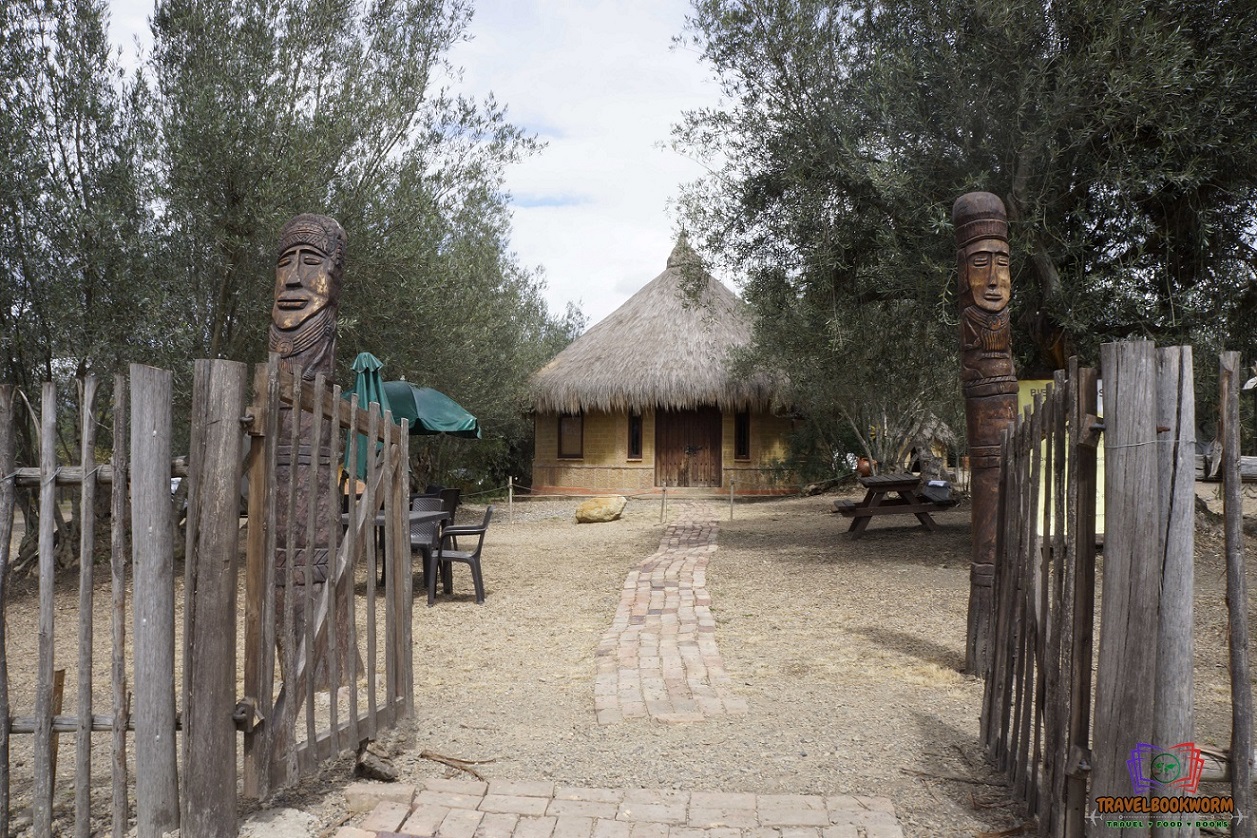 Located about 4.7km away from the town, and situated opposite the Stonehenge of Colombia or also known as “El Infiernito“, Sol Muisca is a place where one can learn more about the Muisca culture through a guided tour.

The Muiscas is an indigenous people of the Central Americas, and they are one of the four advanced civilizations besides Aztec, Maya and Incas. This ancient civilization still exists, but the population of the Muisca has drastically decreased in the modern days.

During our visit, we’re the only two visitors during that hour and the guided tour which cost 10,000COP per person only conducted in Spanish – The English guide wasn’t around at that time.

Our guide took us around the little compound, told us the history of the Muisca, the tradition, Mythology, legend of Eldorado, hierarchy, housing, agriculture, offerings, ceremonies, funeral and usage of all the objects around. The thirty minutes we spent there was quite informative.

The earliest Muisca settlement in Colombia dated back in 800b.c to 1.541 a.c. They have the territory of about 47,000km with a population of approximately 1,200.000. The Muisca have two large political groups of the Zipa of Bacata and the Zaque de Hunza with the main caciques of Guatavita, Ubate, Tundama of Duitama and Iraca of Sogamoso. The language spoken among Muisca was Muysccubun language, and ‘Muisca’ means “man”, “person”, or “people”.

The Muisca civilisation shaped their Confederation in the Cundinamarca and Boyaca highlands and built the villages based on the proximity to the water source. The Muisca believed that mountains and lagoons were sacred, and one of the consecrated lakes to them was the Laguna de Iguaque.

Villa de Leyva municipality was founded in 1572, but the history to this place dated from thousands of years ago. During the Cretaceous period, this valley was a sea before it formed a mountain chain. Later on, from the period of Herrera, the Cacicazgos Muiscas made a settlement in this place based on the two different ecosystems, the dry forest and the high plateau.

Although they were no longer present in this place, some of the legacies still survived in the modern-day such as the Observatorio Solar Muisca. The observatory consists of about 30 cylindrical stone monoliths placed vertically in the ground in two parallel lines and used by the Muiscas to determine the season by measuring the length of shadows cast by the stones.

In Chibcha language, Iguaque means “vigorous mountain’ During the Amerindian time it’s considered as sacred territory for the Musicas. According to the Muisca, Iguaque was a “hear of the world” where the arteries were the rivers and the life of the earth as a mother nourishing life to her children.

Bachué
Is the progenitor mother, woman with bare breast

She chose as a husband a child called Sue. In a radiant morning from the lake of Iquaque, they were emerging and when the time passed, the child grew up and was illustrated by Bachue in the meaning of the offerings and dances to the water representing the rites of fertility, and when Chia (the moon) was in her splendour they loved and had many children, populating the territory and forming the great Muisca Nation and who were instructed in rite and dances for the conservation of water and the world, exhorting them to peace and concord.

Chibchacum became angry with Muiscas because they forgot their teachings by hearing that Goddess Huitaca spoke about pleasures and happiness of life, and sent a great flood on the valley of Bogota, killing a great part of the inhabitants, crops and animals. Muiscas invoked the help of Father Bochica who appeared with a great thunder on a rainbow and with his golden stick, he touched the earth and managed to drain the water towards the Magdalena River, creating the Tequendama Falls.

Annoying Bachica with Chibchacum made him carry the Earth on his shoulders for the rest of eternity, which once rested on giant Guayacanes trees. Seismic movements like earthquakes were due when he got tired and changed the shoulder.

Bochica
He is the civilizing father of Muisca people

He appeared as an old man, had the appearance of a white-skinned foreigner. Clear eyes, white-bearded, white long braided hair, dressed in white tunic knotted on the shoulder, walked barefoot and had a golden stick in his hand. He arrived by the towns of Fomeque and Fosca and walked throughout the territory passing through several towns near of Bogota towards the north arriving at the valley of Tunja and Sogamoso, where he disappeared from the view of the people in the population of Cuitiva Boyaca, leaving his footprint, which was worshipped by Muiscas.

He included the basic principles of the spiritual and personal development of the human being, such as respect for the elderly, uprightness, honesty and love for their own, their customs and traditions. He also taught them all kind of ornamental and artistic works as well as handicrafts, and also selected some priests (Uchyquys) and taught them the art of painting on the rocks.

The Legend of El Dorado

The gold or prized metal was sacred to the Muiscas for it shines like the God Sun. It was regularly offered to the lagoon by the supreme chief – Cacique Sua who wore all his ornaments and covered his body in gold powders. During the ceremony, he took some priests and principals in a raft made of reeds to the centre of the lagoon and sang a few songs. By the first ray of sun, he then dived into the water along with some emeralds and the gold offering in the form of small human figures called Tunjos and returned to the edge of the lagoon.

The Spanish conquerors assumed that the lagoon of Guatavita was full with the offering gold, and many of the conquerors like Gonzalo Jimenez de Quesada, among others, tried to take the treasure and died because of the long expeditions which they couldn’t reach to the bottom of the lagoon, it was then the legend of “El Dorado” rise.

The Muisca Raft alludes to the ceremony of the legend of El Dorado.

This replica was made in gold by a goldsmith artist with the technique of lost wax. The piece has a base with the shape of a boat of reeds with dimensions of 19.5cm x 10.1cm and several figures on it. The larger figure that stands out in the middle represents the Cacique Sua which is adorned with headdresses, nose rings and earmuffs and measures 10.2cm high and is surrounded by its priests and principals.

It was found by some peasants in early 1969 in a cave in Pasca Cundinamarca inside a ceramic vessel which is adorned on the outside with a human figure whose face has sharp teeth.

The piece is exhibited at the Museo del Oro in Bogota.

There were different groups in Muisca society. The family was the basis of the social structure, and each one of the family members has its duty to fulfil the needs of the villages. While the men controlled the family, the women involved in the preparation of the chicha, the ritual songs, and tasked with planting the seed.

The power inherited by the matrilineal way – the son of the elder sister of the Cacique gained the position. The Cacique handled the lines of the politics in the society, the Chaman occupied by the religious area, and the Mercader took or brought products that the artisans and the farmers produced.

The Muisca warriors called Guecha was a group of people selected based on their physical characteristics and personality. They were tasked to protect the territories of the confederation from the enemy.

Mask of the Sun, Moon, Woman, Cacique Guatavita and Priest or Mamo, these were replicas of the archaeological pieces from rituals or ceremonies.

There were three items used in the rites and celebration. Represented the feminine was the Vessel or pitcher to pick up chicha or water, the Ceremonial cup with two snakes design symbolic with the legend of Bachue and the boy in the Laguna of Iguaque, and lastly, the Muisca throne.

The Temple of the Sun

The place was chosen by Bochica as the base of the Iracas or high priests since there was the Temple of the Sun because of its sumptuousness and the wealth that contained, was the greater religious centre of Muiscas. Its columns were giant Guayacanes trees brought from the plains of the Casanare; with great cosmogonic meaning because they supported the earth. The cover represents the cosmos, the temple represents the earth and its columns the bases.The Sun Temple was destroyed and burned at the arrival of the conquerors, plundered its wealth and assassinated its chief Suamox.

The tradition of the Festivity of Huan is still maintained for the annual celebration to the solstice of December 21 or the Musica’s New solar cycle. For four days the word is woven, spirituality and ancestral memory is revived through workshops, lectures, conversations, temporary exhibitions, theatre plays, astronomical observations, concerts, parades and word circles.

The Bohios were round-shaped with the tops pointed, and the support joined on the cusp to a central wood. The walls of bahareque made of cane, and tied with strands of vegetable fibres and packed with clay. The Bohios of the higher person and caciques were bigger and surrounded by small Bohios of their secondary wives (Ticuyes), as well as the guardian people.

Depending on the purpose of the payment, whether by gratitude or by any specific request, walking or dancing in a circular rotation could be done, and in general, to thanks to the great grandmother, Quarts, Tobacco, Corn, Seeds, among others were delivered.

Although there’s no restriction in place or time for the payment, however, payment made in ceremonial sites located in high mountains, caves, lagoons and wetlands according to their ancestral spirit of territory and lineage could give stronger connection to their ancestor.

The funerals of the dead were made with their belongings, food, drink dresses and fabrics. Some chronicles claim that the Caciques were buried underground, in urns, vaults, wrapped in their beautiful blankets, after treatment of a resin called Mocoba, used to embalm and to prolong the conservation of the body.

The corpses rested along with their jewels, weapons, food, Poporos and backpack with Hayo. Next to him, they buried their principal women and servants, who were asleep and intoxicated so as not to suffer the anguish of their death.

The end of life produced a sort of settling of accounts and when the individual was about to die he was accompanied by his relatives in his trance.

The Muisca were farmers and weavers of cotton blankets, and their main meal were potatoes, corns and Quinuas. To ensure they have enough supply to last the year, they cultivated it from different climate zones. Other than that, they also consumed coca leaf, beans, vegetables, honey bees and peanuts, and animals such as curi, rabbit, fish, ants, caterpillars, birds and deers for big ceremonies as well as chicha, the fermented corn drink.

How to get there? – It’s easy, just follow the map.

I recommend walking! The temperature is pleasant to walk around, about 20°C, and the scenery is gorgeous, overlooking the lush greenery and beautiful big houses.

The 55 minutes walk to Sol Muisca is peaceful with fewer cars on the road, just bicycles, motorbikes and horses, and the paved road is about 1.7km, while the rest which is about 3km is gravel.