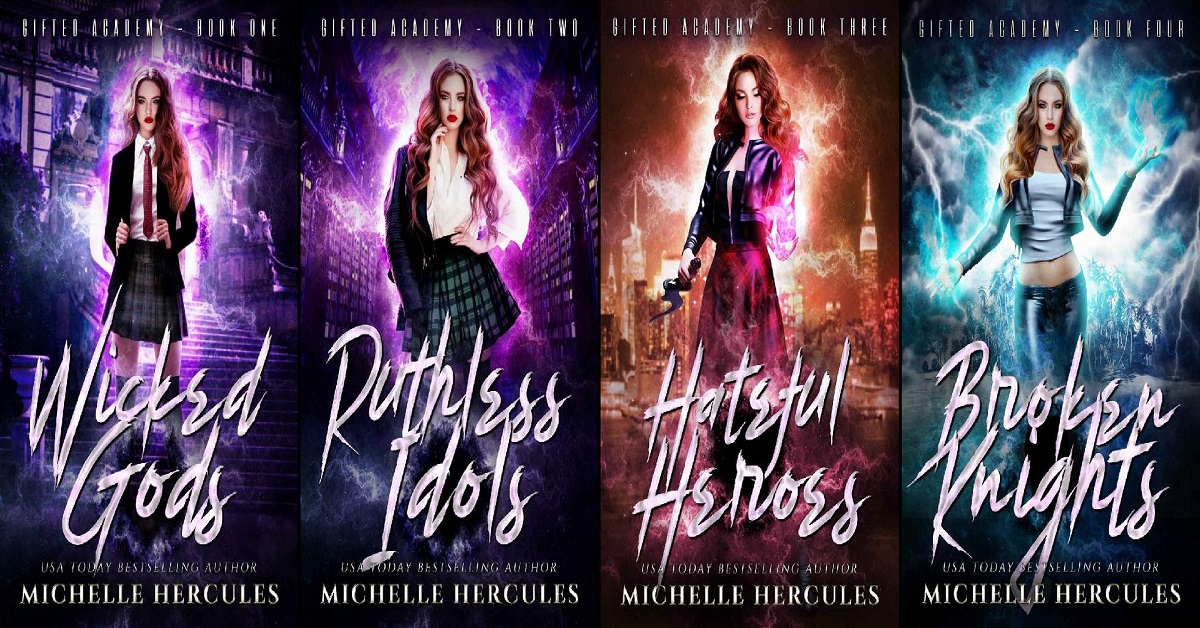 This series is a mature paranormal high school bully. It starts from the resentment that turns to love, not only by one but four powerful idols!

Nowhere is safe when the gods are wicked.

Since the beginning of times, there has always been two sides: Norms and Idols.

But never have the scales been so unbalanced as they are today.

I’m a Norm, which means, I grew up in fear of the Idols and their godly powers.

And now, I’m going to be surrounded by them, day and night. I’ve been offered a place at the prestigious Gifted Academy, an opportunity very few Norms get.

To survive, I must become invisible. But my hope to get through the academy unscathed goes down the drain when the most powerful boys in school set their eyes on me.

They hate me simply because I’m a Norm. If they knew who I truly am, they’d tear me apart limb by limb. But I’m done cowering away from Idols. It’s time for the Norms to fight back, and it all starts with me.

It’s my first time reading a book from this author, and I don’t regret spending time with this first instalment. The story was engaging, and I loved the characters, the conflict, the mysteries and the writing style!

A great way to understand the character’s minds is to give them their chapter. The author nailed it with a smooth POV transition between all the main characters. Bravo, Michelle!

Daisy and the four cocky idols got me hooked up with their story from the beginning until the end. It was hard to put my kindle down that I got sleep deprived!

Bryce brought me back from the brink of death, but he did more than heal my broken bones. He weakened my defenses and carved a place in my heart.

He’s not the only one vying for my attention. Rufio, Phoenix, and Morpheus have all changed their attitudes toward me, and recklessly, I want to know where it will lead.

But a complicated romance with four ruthless Idols should be the least of my worries. Powerful players are closing in, getting ready to either use or destroy me. I don’t know which one is worse.

Ruthless Idols, book two in the series, picked up where it left in book one. I loved it because there’s not much recap on the previous story in this book. Some author loves to include it, sometimes too much that there are not many new plots. But thankfully, not Michelle. After all, I don’t need it, as I read it continuously. Even if she did, she wrote it from other’s POV, which is excellent.

I couldn’t stop reading Daisy’s adventure and her four powerful bodyguards from the beginning till the end. It’s addictive! The revelation at the end of the story didn’t surprise me, as I’d pretty much guess that outcome. But, Mr X, he’s the twist that I did not expect. I can’t wait to find out how the story will unfold.

The impossible has happened. I became the thing that I’ve hated my entire life. Thanks to Bryce’s gift, I’m now an Idol. But I no longer want to see them all destroyed. Thanks to Bryce, Rufio, Morpheus, and Phoenix, the four powerful Idols I’ve fallen in love with, I realize I can’t blame an entire race for the evil doings of a minority.

Being an Idol doesn’t make my existence easier, though. On the contrary, thanks to the rare gift I’ve developed, I’m now wanted dead or alive. Some want to use me as weapon; others want me gone forever.

We’re living in dangerous times, and the only Idols I can trust are my boyfriends. But we need allies because war is coming and we can’t fight in it alone.

Damn, this book is shorter than the previous two books. Hence, I finished it up pretty quickly and now demanding more! Luckily, I already have it in my Kindle and can jump right into the story. But before I read the last book, which I can’t wait to read, here is the short version of what I thought of the story in this book.

I loved the ride and adventure they all took me on! The plot twists to finding out the surprise waiting at the end of the story. It was so entertaining! Bryce was by far my favourite character, but I honestly can’t find fault with any of them. I also liked the newly introduced character – the blind idol. I hope she will appear in the next book because she is too fantastic to be ignored!

The war between Idols and Norms has finally begun. The Neo Gods have shown their hand. They plan to vanquish every single Norm by using any means necessary, even using Fringes to do their dirty work.

My identity as the Unmaker has been revealed, which means I must go into hiding until we’re ready to strike back. But fighting the Neo Gods is not our only problem. Chaos, the primordial god, wants me dead, and facing him seems impossible. He doesn’t care who wins the war. He wants utter destruction.

Our only hope to defeat him, stop the Neo Gods, and save the world is to finally unveil the secret that connects me to Bryce, Rufio, Phoenix, and Morpheus. The key is in our past. We just have to stay alive long enough to discover it.

What an epic ending to this series! This book carries out more action than the previous three books. All of the characters contributed to the final battle, but the real hero, in my opinion, is Morpheus. After embracing his true identity, obliterating the enemy became much easier, and without him, Chaos will win.

I’ve got only one comment: I don’t particularly relish losing characters in the final book. The bad one deserves it, but the good one should stay alive! So sad 😢.

On the other hand, I’m happy that the blind idol, Andromeda, will get her book. I need to find out what they were doing on the island and what happened there. However, at this moment, the series is not completed yet. I shall revisit this author in the future to check the completion of the Paragon Society Series. The last book is scheduled to be released on 27th November 2021.