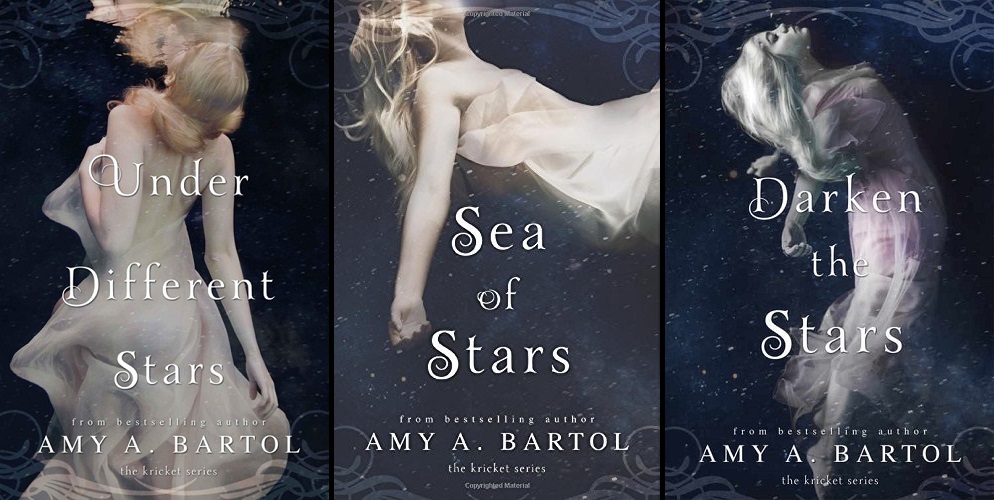 Do aliens live among us? Meet eighteen years old Kricket. Whisked back to her planet, can she stay alive with her earth survival skill?

Kricket Hollowell is normally not one to wish upon stars; she believes they’re rarely in her favor. Well versed at dodging caseworkers from Chicago’s foster care system, the past few years on her own have made Kricket an expert at the art of survival and blending in. With her 18th birthday fast approaching, she dreams of the day when she can stop running and find what her heart needs most: a home.

Trey Allairis hates Earth and doubts that anyone from his world can thrive here. What he’s learning of Kricket and her existence away from her true home only confirms his theory. But, when he and Kricket lie together under the stars of Ethar, counting them all may be easier than letting her go.

Kyon Ensin’s secrets number the stars; he knows more about Kricket’s gifts than anyone and plans to possess her because of them. He also knows she’s more valuable than any fire in the night sky. He’ll move the heavens and align them all in order to make her his own.

When everything in their world can be broken, will Kricket rely upon love to save her under different stars?

I usually read books that are written in the past tense, but because I liked the author’s creative stories, I continued reading another series from her. The worlds that she had conjured was fascinating, so did the plotline and not forgetting the likeable characters.

Kricket was a strong female character, and I loved her attitude. One thing I didn’t like was her reaction towards her kidnapper. She didn’t feel shocked upon finding out what they were. I know it wasn’t her fault; it was the author! Anyway, besides the main characters, I loved Jax and Wayra; They’re funny and loyal.

I hoped in the next book, Kricket would develop her ability and kick Kyon’s ass! I better stop writing now and continue reading the second book! Baw-da-baw Kricket!

Eighteen-year-old Kricket Hollowell was looking for her place in the world when she discovered that the universe was bigger—and more dangerous—than she had ever dreamed.

Now, whisked across space to the planet Ethar, Kricket learns that her genetic ability to see the future makes her a sought-after commodity…and the catalyst for war between her star-crossed parents’ clans. According to Alameedan prophecy, one house will rise to power and the other will be completely wiped out, and Kricket’s precognition is believed to be the weapon that will tip the scales.

A target of both the Rafe and the Alameeda houses, Kricket finds protection—and a home—in the arms of Trey, her Etharian bodyguard-turned-boyfriend. But her visions of what’s to come disturb her deeply, especially since she must discover whether the gift of foresight will allow her to rewrite the future, or if her fate is as immovable as the stars.

I liked this book better than the first one. If you think the first book was slow, this second book will change your mind. 60 % of the content, starting from the beginning, was action-packed. If this were a movie, I wouldn’t dare to blink my eyes, for I would miss the action.

I’m anxious about how things would play out with Kricket’s new vision. Would she be able to change it and have her HEA with Trey? Also, I can’t wait for her to have a reunion with her long lost family members. Hopefully, things would wrap up nicely in the next story, the final book.

Kyon Ensin finally has what he’s always wanted: possession of Kricket Hollowell, the priestess who foresees the future. Together, their combined power will be unrivaled. Kricket, however, doesn’t crave the crown of Ethar—she has an unbreakable desire to live life on her own terms, a life that she desperately wants to share with her love, Trey Allairis.

As conspiracies rage in the war for Ethar, Kricket’s so-called allies want to use her as a spy. Even those held closest cannot be trusted—including Astrid, her sister, and Giffen, a member of a mysterious order with a hidden agenda. But Kricket’s resolve will not allow her to be used as anyone’s pawn, even as the Brotherhood sharpens its plans to cut out her heart.

As the destiny prophesied by her mother approaches, Kricket will backtrack through her fiery future to reshape it. For she knows one thing above all else: the only person she can truly count on is herself.

Reading the first and second book, I was in team Trey. But this third book had me swayed by loyalty to Kyon! He reminded me so much of Brennus in the Premonition series, written by the same author. The same obsession, but this one with a different outcome. At least Kyon got what he wanted 😜!

The ending wasn’t what I expected, and I felt so lost, wanted more, and desperately needed a happy ending, but guess the author left it open for a future spin-off? If I were the author, I have some idea of the storyline for the next book or even the spin-off story! But, I’ll leave it to the expert 😉.