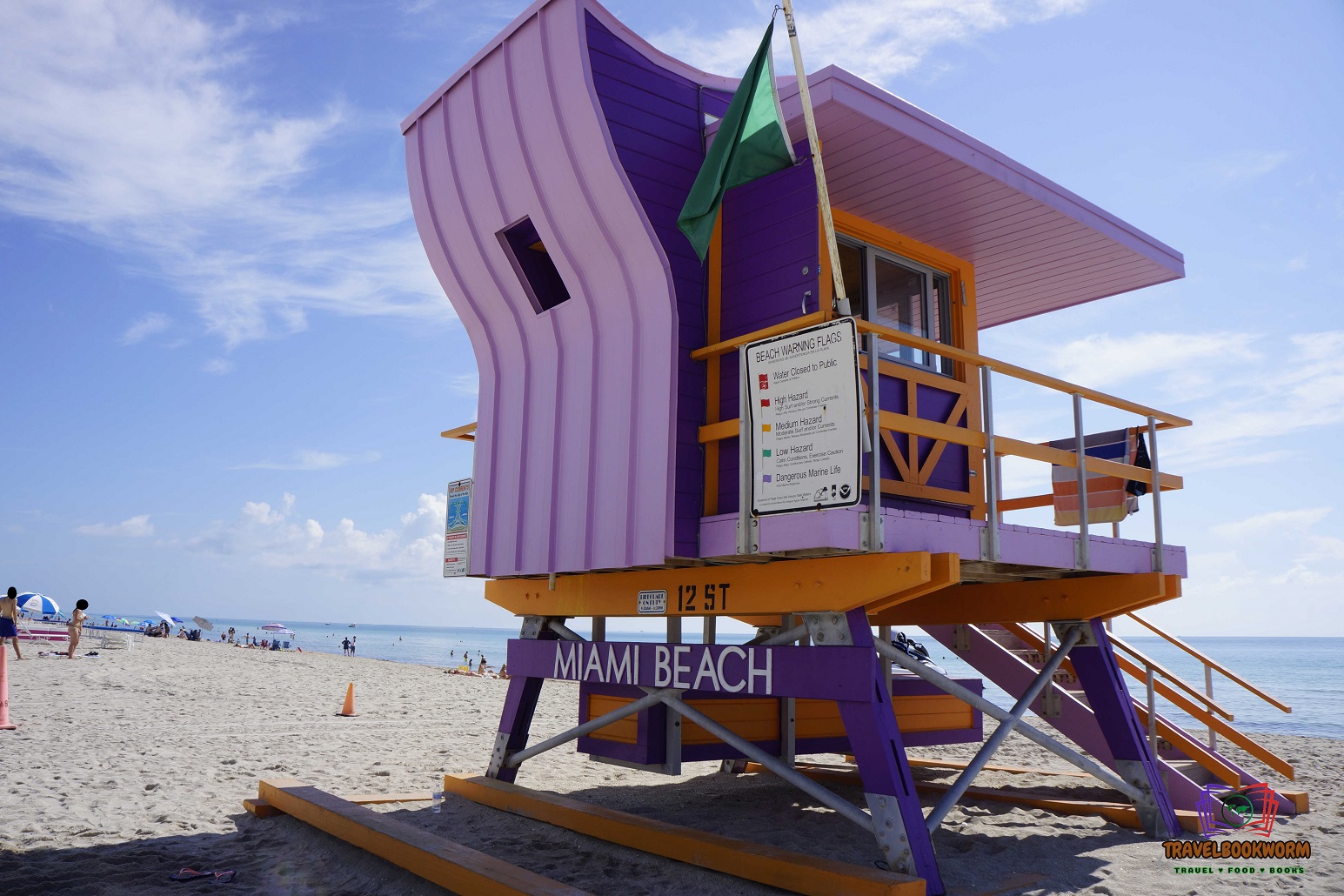 The drama CSI: Miami and Pitbull who’s always included Miami in his song lyrics taught me about Miami, and seeing this place with my own eyes was just unbelievable. We’ve been planning this vacation ever since our last visit to Texas, and this vacation won’t be happening if it wasn’t for mum and dad who paid for this holiday, so, thanks mum and dad, we love you!

I enjoyed exploring this place even with the Sargassum seaweed invasion because there’s so much more to see besides the beaches here in Miami. I’ve included in this post the places I’ve visited or come across with during our three nights stay in South beach.

Flight from Bogota to Miami

We took a bus from our home in Chapinero to the airport which cost 2,250COP, and it’s the quickest I’ve ever experienced. Compared to the normal which took an hour journey, this time, it only about forty-five minutes. The queue for check-in our flight with American airlines, however, took out the extra time we had.

When it was our turn, the officer questioned us about our journey from home to the airport and the reason we’re traveling to the US. We answered truthfully, but the questions followed suit were related to what we had already explained earlier. For me, it sounded like he had been programmed to ask it without really analyzing the given answer.

With an extra hour to wait for our departure time, we went to the lounge, but it was a bit far. Since we haven’t eaten our lunch yet, we took the opportunity and filled our stomach with the available hot meal. It was a lovely and tasty meal, and I especially loved the dessert.

We only go to the departure gate half an hour before our departure time. The plane was almost full, and the entire flight was smooth without any turbulence. However, I couldn’t stomach any more inflight meal, but I forced myself to swallow it, which wasn’t bad at all.

There was some confusion when we landed about filling the landing form, which was computerized. I gave the wrong page instead of the Visa page, but in the end, I still caught up with Mike, and I joined him for the Q&A at the custom together. The officer didn’t question us much, but it’s still a nerve-wracking experience! I’ve heard that it was tough here in Miami, especially flight from Colombia to this part of the US!

Thankfully, we made it through. Despite we arrived earlier than the scheduled time, which was three hours fifty, however, the extra time was spent at the immigration, which took almost an hour.

It was quite a journey walking from the airport transit to the bus hub, and before going down to catch our bus, we bought the transit card. The bus #150 station was situated just on the right upon exiting the lift.

The bus arrived every 20 minutes, and it costs $2.25 for the journey per person. The whole ride to 13th street, which was the closest bus stop to our hotel was about 30 minutes ride, and when we got there, it was raining!

The check-in to the hotel was smooth, dad booked the hotel, but they were still on the flight, having their flight delayed from when they touched down Philadelphia from Manchester.

Everything was perfect in the hotel room, the bed was very comfy, and we have plenty of pillows! Separated Showers and toilet and the toiletries with Crabtree & Evelynn London La Source collection.

Mum and dad’s room was slightly bigger than ours, and it has a balcony overlooking the ocean and swimming pool on the property. A few cabanas surrounded the swimming pool, and upon entering the area, one can enjoy the light refreshment drink and take the pool towel.

South Beach used to be a sandbar, accessible only by boat, however, thanks to the Lummus brothers who decided to build a city by the Atlantic ocean that we get to see Miami beach today. South Beach was the first area that the brothers developed, and along the beach, there’re many eye-catching lifeguard stations.

Lummus Park, an urban park named after Miami’s second mayor, James E. Lummus, and it’s located along Ocean Drive from 5th Street to 15th. Along this public park, you can find a playground, public toilets, fitness equipment as well as paved paths for walking or biking, and occasionally, you can also see various sizes of Iguana scurries away to the safety.

If you’re in South Beach, you might as well visit this place. This beautiful pier is open from 7:30 am until sunset, and it offers a scenic view of the bay and south beach shore.

While we’re there, we saw a man carried big fishes! But I have no idea where he caught that. Was it from the pier? I know fishing is allowed here, and there are rules and regulations to follow which you can find it written on the board, so make sure to read it before engaging in the activity.

Along Ocean Drive, you can see some fancy cars, trendy bars and easily spot the art deco building built between 1920 and 1940. Besides this area, the art deco buildings also stood along Collins Avenue and Washington Avenue. If you’re interested to know more about the historic building, visit The Art Deco Welcome Center located on 10th street Ocean Drive.

This mansion located just next to the hotel we stayed in Ocean Drive. It belonged to the famous Italian designer, Gianni Versace, and it’s also the place where the serial killer, Andrew Cunanan ended the owner of this villa’s life on July 15, 1997. Currently, the 1930s Spanish-style mansion is home to a luxury boutique hotel called Villa de Barton G with a new Mediterranean restaurant, Il Sole.

Located between Washington and Drexel avenues, this charming and picturesque place is pedestrian-only street. This one-block street surrounded by gorgeous European style building come alive at night. It’s a perfect place to have dinner after a long day on the beach. Things you can find here is art galleries, shops, cafe, restaurants and luxury boutiques.

We walked past this museum many times but didn’t get to visit it. Located in Miami’s Art Deco district, it’s hard not to notice it when wandering around the area. This peculiar museum is the only museum of its kind in the United States. It housed an extensive collection includes over 4,000 works from a different era and places in the world, dating back as far as 300 BC.

Visit this place if you’re interested in the Jewish history of Miami and seeing an old synagogue. In front of this museum, you can see Anne Frank’s memorial stone. She was a Jewish girl who had to go into hiding during World War II to avoid the Nazis and became famous because of the diary she wrote while in hiding.

While we’re In Ted’s Hideaway, a group of five fancy cars parked at the corner of the building, and once I saw the beauties, I stopped looking at the many luxury cars in Miami, and kept on searching out for these type of car, which reminded me of Tron movie.

During our stay in South Beach, we went to this place twice. In both visits, this place wasn’t busy, and our food and drink arrived quite fast. In the Irish pub, the music they played was Spanish pop songs which made me feel like I was still in Colombia.

Having a conversation in the bar was hard as the music was loud. However, the food was lovely, and the service was excellent if you minus the fact that the server being dishonest to us about the Wifi password. On the night before, we have the server to keyed the password on our phone, and the next day when we asked again for mum’s phone, the server said the internet was down, but we can use the internet with no problem.

Mum and I shared 45oz of Frozen Strawberry Daiquiri in Finnegan’s Way, one of the many bars located along the Ocean Drive. While sipping the huge drink with an edible straw (Strawberry flavors), my eyes were busy scanning out for fancy cars driving past the famous ocean drive, but it wasn’t until when we got to the next bar that I saw the real deal.

This hidden gem is about 20 minutes walk from Finnegan’s Way. If it weren’t for mum and dad who visited this bar before, we wouldn’t know about this place. It’s a local bar with Pool, Jukebox, TVs, and food and beers that were much cheaper compared to the rest of the bars we’ve been to in South Beach.

We had a quick stop at this bar, which is an Irish bar and more to a sports bar. The interior was beautiful, with a pool table at the end and plenty of Tv on the wall to watch your favorite sports channel. Right across where we sat was a picture of Samuel Beckett with its famous quote:

On our last day in South Beach, we had our lunch here. Been living away from Asia had made me missed the flavor, and because of the diversity in the US, making it easier to get some Asian food here, I didn’t miss the chance to satisfy my thirst for the taste of Asia.

When we were there, two Vietnamese Americans was taking care of the operation, and as usual, all the portions served in the US were huge, but considering the price we paid, it was worth it!

When we finished with our four days three nights here in South Beach, we hopped on to Dave’s car, he came ten minutes earlier than the scheduled time at 1 pm and drove us to our next destination, Key Largo.