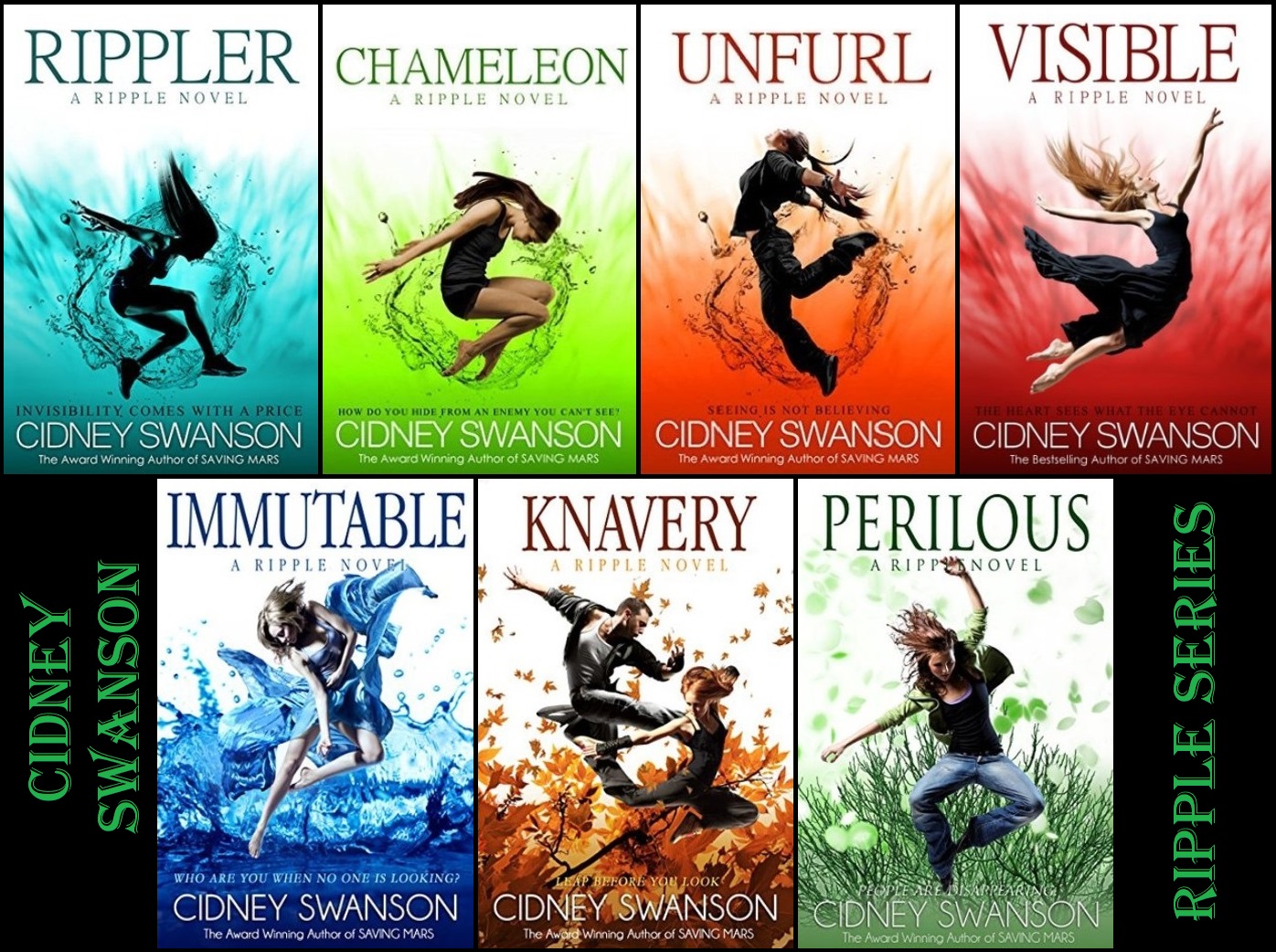 Most of the books written by Cidney Swanson are in Science Fiction genres, and this Ripple series is about a group of people who can turn invisible due to the unusual gene.

Fifteen going sixteen years old teenager, Samantha Ruiz @ Sam discovered that she could turn invisible. It’s a great advantage if only she could control it. Instead, it had become a problem in her daily life by not knowing when she would vanish or how to return to get her physical body back.

Scared of being treated as a lab rat, Samantha kept the thing to herself, having no one to share her burden. Things started to change when Will Baker saw Samantha vanished into thin air, and it wasn’t long before the two of them become a best friend.

Will Baker has secret that he couldn’t share it with Samantha, and if it wasn’t because of his sister, Mickie accidentally spilt the bean, Will wouldn’t be able to talk freely about things that he knew and also let Samantha into their circle.

When things have gotten more serious, during Samantha’s practice, she accidentally hurt herself, and her best friend Gwyn misunderstood the caused of her injury. Samantha would have to choose to either let Gwyn know the truth or walk away from their friendship, and it wasn’t the only hard decision that she had to make, there’s more which involving her heart and also Will’s safety.

The ability to turn invisible was what made me interested in reading the story. I was curious about how Sam got the talent, but this first book didn’t give me the official answer yet, just some speculation, and I look forward to reading the next book soon. Hopefully, Sam would be able to master it and use the advantage to save herself from the impending danger.

Sam, Will and Mickie travelled to France to meet the man who could help them to connect the dot in their investigation and stop the evil Helmann from creating an army with a unique ability.

However, Helmann wasn’t the only person they need to be worried about. Sam’s life was in danger as someone invisible was tailing her, and she will need to figure out how to hide from an enemy which she couldn’t see.

At this moment, Sam still doesn’t know how to control her ability, but on the plus side, we learn more on the history and how it linked back to her. I was a bit sceptical about Sir Walter, but in the end, he’s alright. Sam’s friendship with Gwyn also being restored, and her love life finally happening, now if she could only focus on controlling her gift, it would be perfect.

Back in the US and with her bodyguard watching her 24/7, Samantha thought nothing wrong could happen to her. However, when she got kidnapped, things started to turn ugly. Something belongs to her was stolen, and with her bodyguard refused to jeopardy her safety, Sam would need to at least control her ability before she could go on a dangerous mission, alone.

Meanwhile, on the other side of the ocean, the trio team – Will, Mickie and Sir Walter discovered something sinister in Helmann’s facilities. Something that will change the fate of human beings if they couldn’t figure out a way to stop it. Could it be that the person they trusted and whom they thought was dead was going behind them and involved in this nasty thing?

I enjoyed this book, I loved the characters, and I freaking knew that he’s a double agent! Now, I’m just happy everyone’s alright in the end, and looking forward to reading the next book. I’m sure it’s about Gwyn and her Unrequited love. Oh, and there’s one more bad guy that’s still alive right? If I not mistaken it’s called Fritz?

Gwyn Li, who survived the abduction in the previous book, was now ready to go back to her life. However, fate didn’t want to let her go yet. Lack of passport, the France authority wouldn’t let her board the plane back to the US.

Now stuck with the team while waiting for her document to arrive, she was more than happy to spend more time with her seventeenth-century crush, Chrétien de Rochefort, and hopefully, she would be able to fix her boyfriend-less status.

Pursuing Chrétien who’s still grieving for his wife and daughter proved to be a tough job, and Gwyn had considered forgetting about him. However, having to spend more time with Chrétien, and with him spinning tales of his background as the Cinderella’s charming prince, Chrétien cast an even deeper spell on Gwyn.

Fritz Gottlieb, the son of arch-nemesis Helmann, wouldn’t give up on obtaining Helmann’s secret, and he came up with a more deadly way to use Gwyn to get what he wanted, and it’s up to the team to figure a way to stop him.

I loved Gwyn Li’s story more than Samantha’s! I think because it’s much lighter and also because Chrétien was there. He’s a cool guy, and  I loved reading the fairy tale. One thing that kept me reading this book was because I wanted to know how Gwyn related to the Chameleon.

There’re plenty of possibilities, and I kept on thinking the answer while reading the book. Could it be that Gwyn’s father was what causing it, or maybe she’s the reincarnation of Chrétien’s wife? However, when I got to the last page, I still couldn’t find the explanation. I hope I’ll get it from the next book.

Awakened from her hypnotized sleep and was told that the mission she’d been preparing for her whole life was all a lie, Martina lost her life purposes, and she also didn’t know who to trust.

Pfeffer seemed to be a great guy, but he’s only focusing on his mission which was to give all the Angel Corps sleeper a new life. However, it came with a cost and Martina disliked the idea.

The only person Martina trusted was Mutti, her foster mother, and so she asked Pfeffer her whereabouts. But what Martina discovered when she got to Mutti’s house was heartbreaking, and the truth on why her boyfriend, Matteo left her finally revealed.

Just when she finally thought she has someone to trust, Martina saw something in Matteo which she couldn’t accept. Meanwhile, Fritz Gottlieb had something in his mind, and he wouldn’t hesitate to use Martina and her siblings to achieve his mission.

The immutable, a story told from various characters’ point of view, but mainly concentrated on the Angel Corps girl, Martina who was put to sleep by Helmann while waiting for the right timing to be awakened and ‘heal’ the new world.

At first, it was a bit difficult to digest the story since I wasn’t familiar with her character, but once her childhood memories surfaced, it got better, and I pitied her for the conflict she faced.

The ending, however, wasn’t what I expected, and I hope they will get Georg sided with their team. Meanwhile, I can’t wait to know the truth about Gwyn’s dad, and I also hope that I’ll get to read a book in her POV again.

Skandor Dusselhoff has always wanted to go out exploring the outside world, leaving behind his parents business, the boring Midgard camp. His opportunity came when Geneses Corporation offered him a job. All the while, Skandor though he’s the only one with the special cloaking gift, what he discovered in Geneses surprised him.

Georg has one thing in his mind, to win uncle Fritz’s trust and find out what evil plan he has in mind. When uncle Fritz introduced him to his experiment subject, Georg was shocked to find out Katrin still alive.

Now he has another mission, to rescue her, and he will do anything to win her trust. Little did he know that Skandor also planning to do so, in the end, who would be the one rescuing the damsel in distress?

New characters introduced in the book, and the POV mostly were from Skandor or Georg. At first, it was a bit slow, but when I got to almost half the story, it started to get interesting, and it’s kind of hard to put down the book. It kept me guessing on who would be the one rescuing Katrin, and also what’s Fritz planning to do to Sir Walter and the team. Anyway, I’m happy that Gwyn finally got the answer, and I hope she would be able to ripple too!

With so many things happening around Sam, her best friend getting married, another friend moving away, her mum’s death anniversary, Sam didn’t feel like herself, and the conflict in herself had pushed Will away.

In the meantime, Georg launched his plan with his team of Angel corps member, causing havoc in the island of Milagros, and it’s only a matter of time before it reached Las Abuelitas. The team must take action before the community in Sam’s beloved town vanished too.

The last book of the series and the ending didn’t disappoint me. However, I did feel annoyed with Sam. I was hoping she would be a badass, but she broke down at the beginning of the story! Gwyn was my favourite characters in this series, but I didn’t like the way she rushed thing, especially without her mom’s approval. Besides Sam and Gwyn, Mickie and Skandor also have a happy ending, and I thought Bridget Li had a thing with Sir Walter, but guess I was wrong.