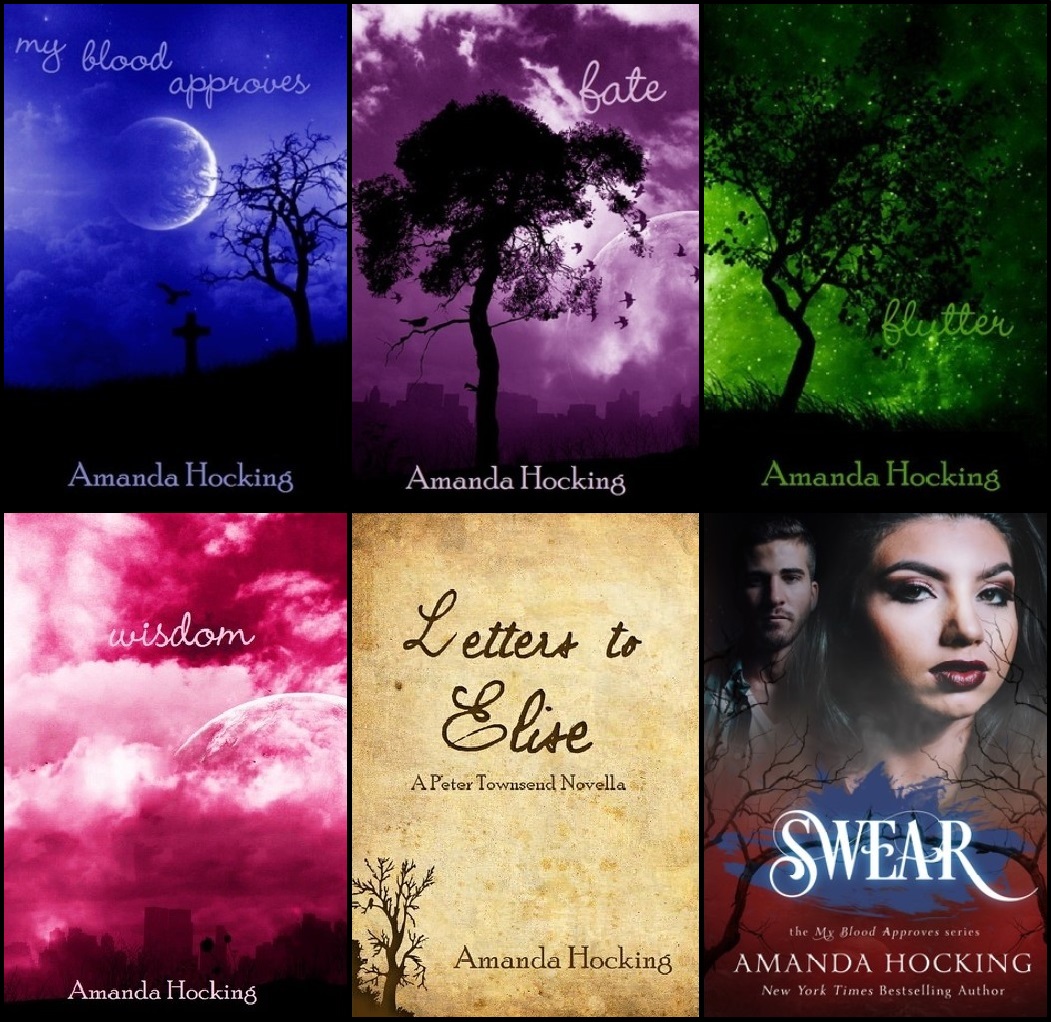 My Blood Approves Series is a Vampire story written by Amanda Hocking with five main stories and one short novella. The primary ones are My Blood Approves, Fate, Flutter, Wisdom and Swear while the short story is Letters to Elise: A Peter Townsend Novella. Also included in this post are the synopsis, a brief review to each book as well as the reading order in the series.

Seventeen years old Alice Bonham and her best friend Jane were on their way back home from their failed attempt of partying in clubs when a group of men chased them.

Thankfully, Jack happened to be passing by and rescue the damsels in distress, and that’s the night that changed Alice’s life forever. Jack appeared to be a charming young guy, and there’s something in him that made the others immediately captivated by him. However, Alice didn’t feel the immediate attraction, and that’s what made Jack interested in her.

The two of them started to hang out often, and when Jack took Alice back to his house, she met his brother, Peter who made her heart raced and forgetting to breathe.

Both of them felt the instant pull, but Peter refused to acknowledge it, leaving Alice unsure of what to do with her growing feeling towards Jack and her newfound soul mate who didn’t want her. Aside from her romance problem, Alice also needed to decide on whether to take on the opportunity of promised immortality and risked on leaving behind her brother, Milo and mother.

Honestly, I enjoyed the story. The act and emotion felt real, I mean if I put myself as Alice, being a teenager, I’ll probably act the same. She’s one lucky girl who’s loved by many, and I wasn’t talking about Jack and Peter, but Ezra, Mae and Milo too. Meanwhile, I pitied Jack. He’s funny and happy go lucky kind of ‘guy’, and I hope Alice would end up with him, but we don’t know much on Peter’s character yet other then he’s a dickhead. Anyway, I’m curious about who Alice will end up with, and the only way to find out the answer is by reading the next book, so off I go

Things had turned slightly manageable back at Jack’s house when Peter left. There’s no certainty whether he’ll ever come back again, and with his absent, Alice was free to come to visit Jack, Ezra and Mae.

During the summer school break, Alice and her brother Milo spent their time in Jack’s house. They have a wonderful time together before the tragedy struck, leaving Alice no choice but to ask Jack to turn Milo into one of them. The event changed the plan they’ve already made for her, and it made Alice felt somehow abandoned.

Jack spent more time with Milo and taught him all the necessary things so that he could adapt to his new life. He’s practically glued to Milo, and it made Alice restless back at her home. When things got better, Jack and Milo took Alice out to a Vampires bar to cheers her, but it was a bad idea. Some Vampires took an interest in Alice, and she was in danger more than she ever been.

I totally agreed with Milo’s when he said that Alice being melodramatic because that’s how she has been acting in this book. Meanwhile, I disliked Jane, and I have a bad feeling about her, and now that she knew that Vampires existed, I wouldn’t be surprised if she turned into one. The story at the beginning of this book was interesting, but not so much in the middle part because it was dull as nothing truly happened.

But the closing on the story was WOW, I didn’t expect that to happen, and I have to force myself not to read the next book, Flutter as soon as I finished with this one. My biggest questions were about poor Jack and Alice. What’s the fate waiting for them in the next book, and after the drastic action taken by Jack, would it resolve the blood bond issue?

Being a newly turned vampire, Alice was a bit slow in controlling her bloodlust compared to her brother, Milo. Her first test was when she volunteered to go on a rescue mission with Ezra.

Surrounded by humans, she needed to control her urge and reach their destination to talk sense to Peter, who’s on a hell-bent suicide mission after she’d chosen to be with Jack. Peter had killed one of the Lycan clans, and he’s on the run ever since. The Lycan was known to be brutal and sadist, but Ezra’s willing to do anything for Peter’s freedom.

Finally, the Townsend family members reunited again, but sadly, it didn’t last long. Having Peter back at home, the love triangle drama started again, and the loving couple, Ezra and Mae faced a serious issue which would test their relationship.

Milo, on the other hand, was the happiest in the family with his boyfriend, Bobby. Besides the relationship issue, the gang also needed to save Alice’s best friend, Jane from her vampire blood addiction and also battled the Lycans clans.

I liked Flutter a lot compared to the first two books because there’s a lot more going on in this book. New characters also had been introduced in the story which made it much more interesting, there’s also a scene that involved a life a death situation, and last but not least, we got to see the different side of Mae in the story, which was not pretty. (I felt like slapping her, and talk sense to her since the main character couldn’t do it).

I also can’t wait to find out more about Leif, the ex Lycan member. When Alice said his eyes looked like Milo, I suspect that he’s their father. Oh boy! I wonder what’s the story behind it, and if my guess is correct.

After Mae stubbornly turned her five years old great-granddaughter, Daisy, she moved away to a secluded area in Australia along with Peter. During the summer holiday, Alice, Milo and Bobby visited them, but their vacation was cut short following the news of Jane departure.

Alice did some digging, determined to find the serial killer who’s responsible for Jane’s and the other girls’ death. Ever since she started her training with Olivia and Violet, she wasn’t a helpless girl anymore. Her agility and skills had improved tremendously.

Jack’s protectiveness had forced Alice to secretly continuing her revenge mission, and when Jack found out, it destroyed their relationship. Meanwhile, Daisy had caused a messed back in Australia, forcing Peter and Mae to return home, and with the little devil tagging along plus a serial killer on the loose, it bound to attract attention from the vampire bounty hunters.

Wisdom – a suitable title to the story transpired in this book. As the tale progressed, we see the sign of it in most of the characters. Peter and Jack’s relationship improved, Ezra came out of his cocoon, Mae finally did what’s necessary, and I was relieved with that, phew!

Jane turned over a new leaf, though didn’t get the happy ending, it was still great hearing her effort, and most importantly, the notable improvement with Alice’s character as she finally learnt self-defence, homeschooled by Ezra, and she eventually decided what she wanted in her life.

Overall, it was a great read, and I believe most of the reader loved the new Alice because a badass character was what we’ve been waiting for in this book. I can’t wait to read the final book, Swear, but before that let me read the short story, Letters to Elise.

A short story about Peter’s life told in a letter format which he wrote addressed to his dead wife, Elise from before he’s turned into a Vampire until the 21st century when he met Alice.

This short novella was a great way for me to understand Peter better. Although it was a bit weird reading it in a letter format, it served its purpose well, and I think it gave me an idea on what we’ll encounter in the last book, Swear. – “someone will answer for what they did”.

It had been over five years ago that the Townsend family left Minnesota to live their own lives in new countries. Alice, Jack, Milo & Bobby moved to Amsterdam and Peter travelled the world, while Ezra and Mae in London busied themselves restoring an old manor that they’d purchased.

In the new place, Jack opened a comic shop, Milo became a chef, and Alice had officially become a Vampire Hunter and worked for the agency with Bobby as her sidekick.

Alice had been having a dream about a girl, who warned her that danger was approaching, and that she needed to help the ones she loved to make peace.

Alice didn’t have any clue about it, and she didn’t immediately start investigating until Olivia told her about the suspicious behaviour of a friend of Peter & Ezra. The investigation took her back to where things first started, and when she thought it’s over, she still had the same dream, and the girl appeared more agitated of the impending danger.

I loved badass characters, and Alice in this story didn’t have the quality at first, but she’s slowly getting to it in the last two books, and I thoroughly enjoyed reading it. Although the ending for Peter wasn’t what I’d expected, as long as he’s happy, I had to accept it. He deserved happiness after all the suffering he’d endured throughout his long life.

I was also glad that the author included spirit/ghost in this story, making it unique, and how I wished Alice had told Peter about it, and if only the spirit materialised in front of them when they visited the grave, it would be awesome! Goodbye Alice, Jack, Peter, Mae, Ezra, Milo, Bobby, Elise, Leif and Anna, have a rest now.

By the way, the vampire snacking place in Amsterdam ‘Darah Merah’ means Red Blood in Bahasa Malaysia / Indonesia. Oh and Bobby, please change your mind soon before you’re getting much older!