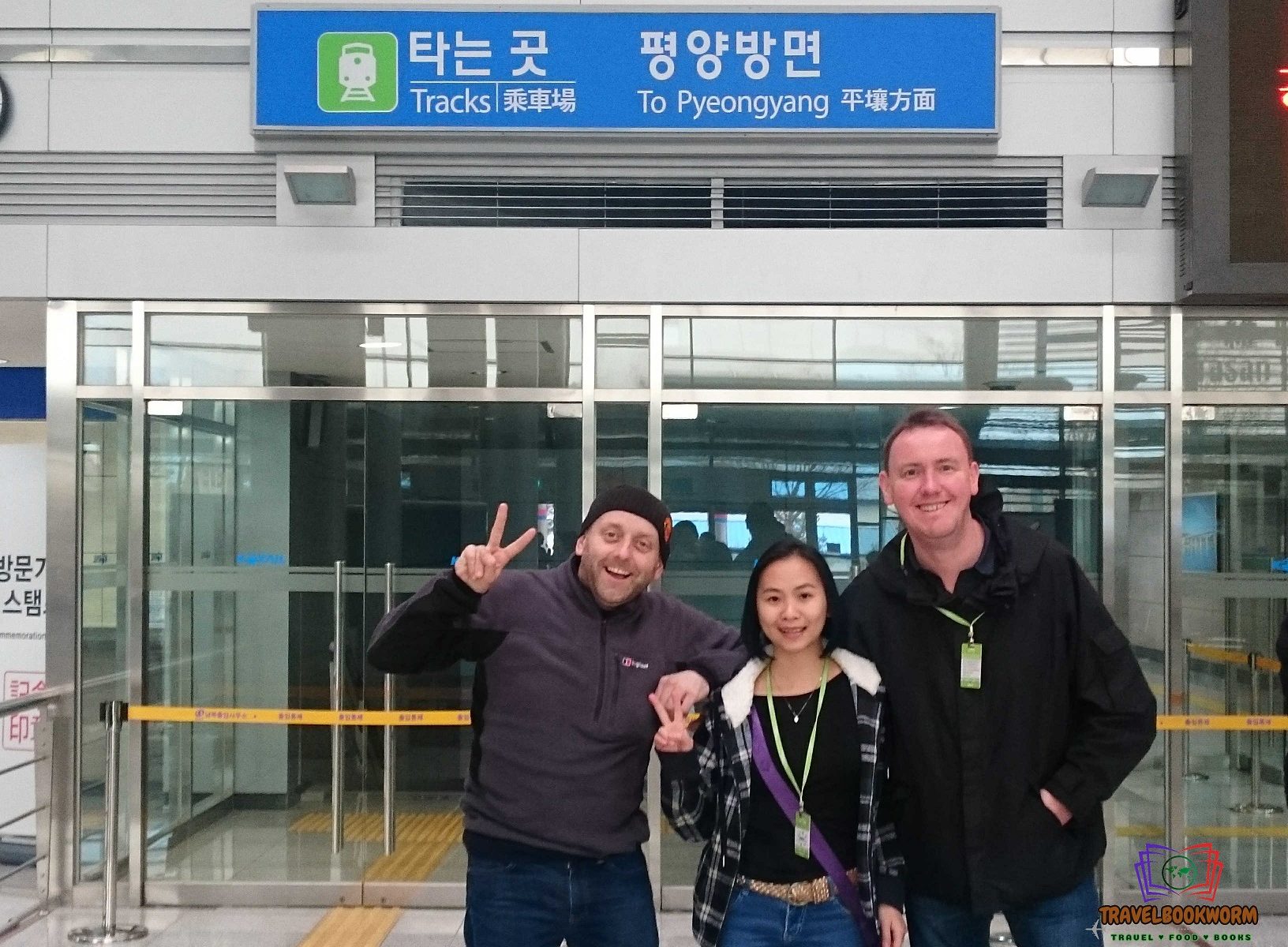 I have been living in South Korea for almost two years now, and yet I still haven’t had a chance to visit the place near the DMZ. When Matthew came here for a visit before we all travelled down to Bangkok for a holiday, I finally get to visit this place.

The Journey to the DMZ

We bought the ticket from the Korail website for the price of 17,800won per person (two ways). We didn’t bother to print out the train ticket, but we have the softcopy of it saved on our phone.

The train departed from platform number 14, and it left on time.

This three-cabin train beautifully decorated with flower patterns on the seats as well as on the floor. There were photos, and wording in many languages printed on the wall for the phrase ‘peace love harmony’.

You can buy light snacks and beer from this cabin.

During the journey, they come and check on your seat reservation before distributing the form and promoting a tour package to us. They also gave us a lanyard, and we need to put it on throughout the whole trip.

We bought the tour from them, and because we didn’t pre-book it, we got a green lanyard instead of red.

At Imjingang station, we got off the train and walk to the checkpoint. We showed our passport and also the form that we’d filled out earlier to the security. We returned to the train after completing the process, and there were a few soldiers got on the train and rode with us to the last stop.

About an hour thirty-two minutes after we first started the journey, we arrived at Dorasan station. The soldiers then asked us to line up at the entrance to the station. When we got inside the station, another person took over the crowd and told us to get on to the bus number two.

Before the bus journey started, a man introduced himself as our guide for the day, and he also collects our form. He made a short introduction and briefed us in Korean and English. His accent was a bit difficult to understand at first, but after a while, we got used to it.

were told not to take any pictures inside the bus, but it was ok for the view outside the bus. Along the road, whenever we were reaching to an exciting site, the guide will tell us about it, and before getting down the bus for a visit, he would let us know the time to get back on the bus.

The Dorasan Pyeonghwa Gongwon (Dorasan Peace Park) started its architectural planning since the opening of Dorasan station in 2002. Peace Park construction began on May 12th, 2006 and was completed on June 13th, 2008.

Gyeonggi provincials voluntarily donated their money and trees to build the ‘Unification Forest’.
The Dorasan Peace Park will help the youths of today to better understand the history of DMZ and appreciate the value of peace and ecology. It also will serve as an arena where ‘the Peace loving Global Villagers come together.’

Lunch served in a Buffet style for the price of 7,000won per pax. After lunch, we went to the souvenir shop next door to buy some fridge magnet.

This observatory first opened to the public in January 1987. From the binoculars, if there’s no haze or fog, you could see various places in North Korea including Sacheongang river, Song-aksan mountain, Kijeongdong, the peak of Geuknakbong, Gaeseong Industrial complex, Daeseongdong and also the Statue of Kim Il Seong.

Binocular is chargeable at 500won for 2 minutes, unlike in Odusan Observatory where it’s free of charge.

This place was by far the most interesting one compared to the places we visited earlier. Before heading down the tunnel, we watched a short film about the 3rd tunnel in a theatre. Once the movie ended, the officer led us to the locker room and told us to store our belongings including phones or cameras in the locker. It’s prohibited to take any pictures inside the tunnel.

Before descending the 300m tunnel, we had to put on a helmet. The descent was quite steep, but there’s a railing to hang on to at the side. As we got to the lower platform, that’s when I understand the purpose of the helmet.

Once every so often I heard someone yelping when they accidentally bumped their head on the low ceiling in this part. We walked to the end of the platform (a concrete wall with little window) before making a U-turn to head back up.

The first tunnel
Found the tunnel on November 15, 1974, by a search team, 8km North of Gorangpo. The tunnel was 25 ~ 45m beneath the surface, 90cm in diameter and 1.2m in height. Consisting of concrete assembly, the tunnel has 3.5km of rails and a railroad cart. Even though the North says that it was a South made tunnel, evidence of numerous North Korean goods, digging strokes leading from the north, and markings that record progress shows that it was made from the North.

The second tunnel
Found the tunnel on March 19, 1975, 13km north of Chul-won, hearing sounds from beneath, an underwater developing drilling machine was introduced, and it began to search for water pockets. Out of 45 holes drilled, 7 successfully penetrated the tunnel. It measures 50m in depth, 2.2m in diameter, 2m in height, and 3.5km in length. There is a massive assembling area and the southern exit is divided into 3 directions. About 5 times bigger than the first tunnel, 30,000 armed-soldiers can walk through here in an hour along with vehicles including field artillery.

The third tunnel
Found the tunnel on October 17, 1978. An underwater gush during an expedition revealed its form. Located only 52km from Seoul it is considered more threatening than the first and second tunnel. It ranges 2m in diameter, 2m in height, 1,635m in length and averages 73m beneath the surface. There are 3 exits at the southern end and 30,000 armed-soldiers can go through this tunnel per hour.

The fourth tunnel
Found the tunnel on March 3, 1990. 26km northeast of Yangku, within the DMZ. 1.2km from the Military Demarcation Line, the tunnel’s height and diameter are 1.7m, depth is 145m and the length is 2052m. These facts reveal that there are southern invasion tunnels all across the front lines. Even though the North insists that the tunnels are made by the South, the direction of the explosives, the slope is lower in the northern end shows that the North made these tunnels.

While waiting for the rest of our tour group members to make their way up from the tunnel, I wandered around the area and took these photos.

The Journey Back to Seoul

When the Trans-Korea Railway (TKR), the Trans-Siberia Railway (TSR), and the Trans-China Railway (TCR) are connected in the future, Dorasan station promises to emerge as the starting point of the transcontinental railroad.

On the way back to Seoul, we didn’t stop at Imjingang station. That’s a good thing because most of us on the train were feeling tired. The only energetic one was the children, and they spent their time bickering, laughing, talking and eating rice crackers throughout the journey. As for me, I spent my time reading the Mythos Academy series while Mike enjoying his beers and Matthew sleeping on his seat.

Here’s the route and time we arrived in each station:

Night Out in Seoul

When we arrived at Seoul station, we had a quick drink at Glucks Schwein. I had the Afri Cola, and it tasted like flat coke. We took a taxi to our favourite bbq restaurant in Euljiro 1 and had dinner.

After that, we went to the bars around Jongno to have a few pints before we called it a night.