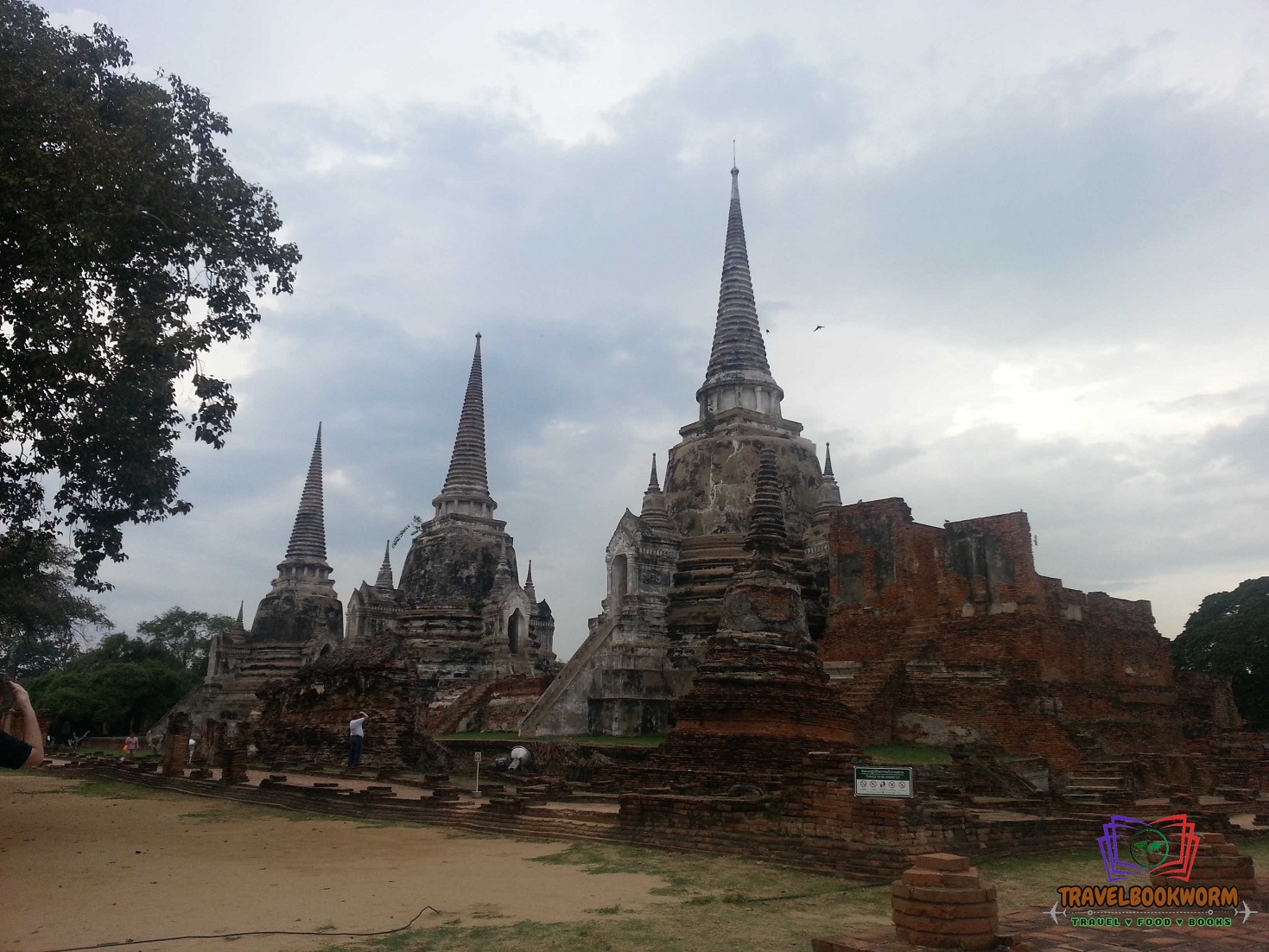 Planning to go local on this trip to Ayutthaya, we bought ourselves a 3rd class coach seating on an ordinary train. Selling at only 15Baht per person, we get to sit where there’s no air con but a fan.

However, we were unlucky, to get seats with a broken fan. Sweat trickled from every corner of my pores, and by the time we finally reached after about 2 hours journey, I was completely drenched. It was fun though, and you get yourself a free sauna too!

Walking to the end of the street opposite to Ayutthaya train station, we reached Baan Ah Gong Riverside Homestay at 3 pm. After freshened up in our private bathroom, we went to the Riverside wooden dock. The boat came and took us to the other side of the river for the charges of 5 Baht per person. We then hired a Tuk-tuk to take us to Wat Phrasisanpeth I.

From the information board:

Wat Phrasisanpeth I
Wat Phra Si Sanphet was situated on the premises of the royal palace which had been established in the reign of King Ramathibodi I (King U – Thong). In 1448 King Boroma-Tri-Loka-Nat dedicated the site of the palace to the construction of the temple. The important edifices in this temple are the tree main stupas containing the ashes of King Boroma-Tri-Loka-Nat, King Boroma-Ratchathirat III and King Ramathibodi II. It was a royal temple of the kingdom of Ayutthaya, used for such important royal ceremonies as swearing allegiance and it also served as the royal family’s private chapel and the place where the royal family’s ashes were preserved. No monks resided here though they were occasionally invited for particular rites.

The first thing that comes to my mind when we reached Ayutthaya is the wonder of Buddhist temples or what Thai people call “Wat”. This place scattered with so many of them, and according to Wikipedia, there are about forty thousand all over Thailand. But what intrigued me the most is the Chedi and Prang.

Stepping on those places always takes my mind travelling to the ancient world far away from the modern mundane one. It’s amazed me how they built it with their bare hands. I wish I could see them working their magic on constructing the unique shape of the monument. But right now what we can do is just continue to admire and preserve the magnificent creations.

From the information board:

Wat Phra Ram
As shown in the Historical records of Luang Prasert, Wat Phra Ram was built in 1912 B.E. by King Ramesuan on the cremation site of his father, King U-Thong. It is assumed that the construction had not been completed as high reign was only for one year. It is possible that either King Borommarachathirat I completed the construction of King Ramaesuan completed it himself when he re-reigned the Kingdom after the death of King Borommarachathirat I.

The temple has been restored several times since it is close to the palace including when “the Great Period of Restoration” during the reign of King Borommatrilokkanat which all temples in the Kingdom were restored. It was once again restored by King Borommakot in 2284 B.E. Nowadays, attractive remaining of the temple are the large Prang and Chedis.

Infront of the temple is a large pond named “Nong Sano”. This pond existed before the Ayutthaya City had been established and was once much smaller. During the establishment of Ayutthaya city, the earth around the pond was dug out and taken away for the construction which made it larger as present. The pond was originally called “BuengCheeken” in the Royal ruling and was changed to “Bueng Phraram (Phra Rama Pond)” until present.

That was the only two temples that we managed to visit before the sun goes down. The entrance fees for each place was 50baht per person. We had our dinner at Ruean Rojjana restaurant and had a few beers at the Chang house before we went to WoGunT to meet with Mike’s mate, Chris B. The next day, we took the train back to Hua Lamphong station and get on with the train to Hat Yai at 2:45 pm. We had already bought the ticket online at the cost of 2,474Baht for two. It took 15 hours to reach Hatyai.