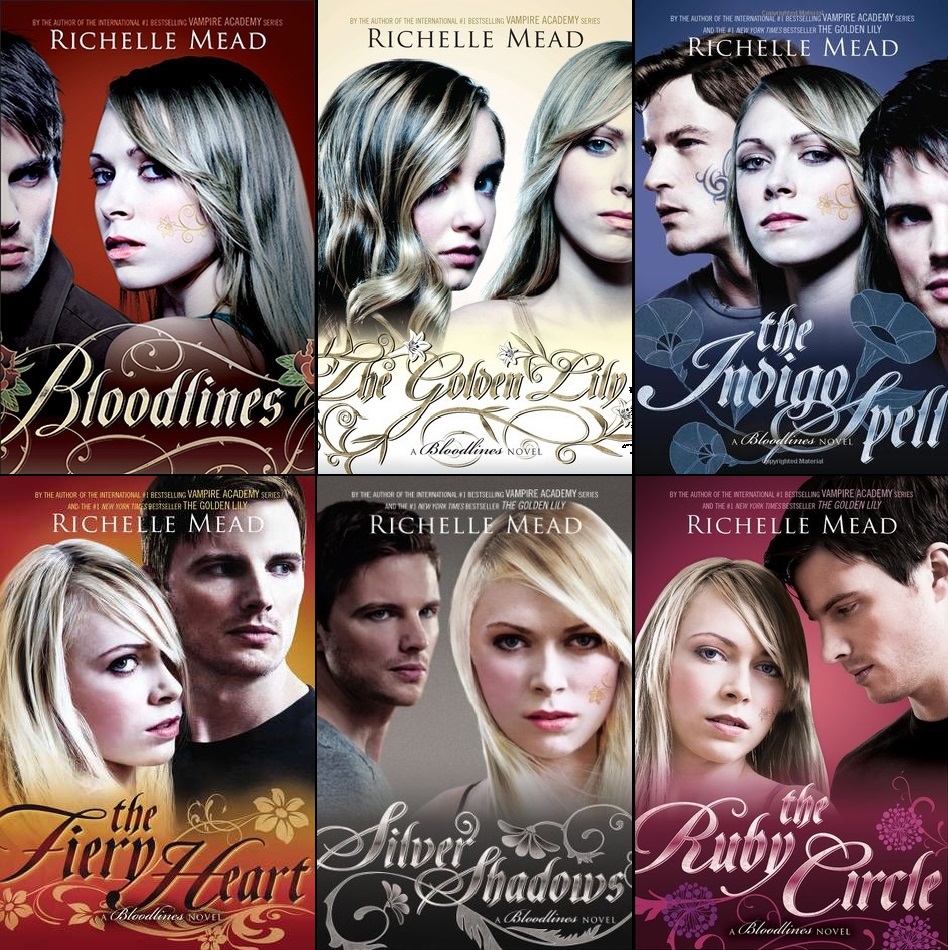 This Bloodlines Series by Richelle Mead is a spin-off from Vampire Academy Series. You will find a complete book series in order with a short review. The main book in the series consists of Bloodlines, The Golden Lily, The Indigo Spell, The Fiery Heart, Silver Shadows & The Ruby Circle.

This Bloodlines series was a spin-off from Vampire Academy series. In this series, we learn more about The Alchemists, an organisation responsible for cleaning up messed by the supernatural – Strigoi, Moroi or Dhampir.

Most of the times they prevent human from knowing the existence of supernatural creatures.

The Alchemists were very efficient in doing their works, they have all the high-end equipment and facilities around the world, however, according to their code of conduct, it’s very wrong to be friendly towards the Vampire or Dhampir.

An Alchemist named Sydney was the main character in this book, and she was in deep trouble following her roles in helping out Rose and her parties in the Vampire Academy series.

The Alchemists accused her of showing affection towards the Vampire/Dhampir. And when a new mission came, even though she was at risk of being sent off for re-education, she insisted on taking over her sister’s role to save her sister from getting involved in the Alchemist business in her adolescent (Not that her sister appreciated her act though).

In her new mission to protect Queen Vasilisa’s sister – Jill from being murder by those who wanted to overthrow the queen, Sydney had to go back to school and pretend to be blood-related with Jill and also the other Dhampir, Eddie.

While in the school, she managed to solve a mystery of super tattoo that giving an enhanced ability to the student who had had it done and earned praise from her superior. Her history teacher had also tricked her into learning witchcraft and claimed that she had a touch of magic, but Sydney hated it and a bit scared of getting into trouble if the other Alchemist knew about it.

In the second book, Sydney reluctantly continued her research on the witchcraft, and there’s also an additional Dhampir added to her team – Angeline for extra precaution.

But Angeline proved to be the wild one, always creating a problem. As the story progress, Sydney found out the conspiracies hidden by The Alchemists. She also for the first time went on a date with Brayson who was so much like her, they shared the same interest.

However, Sydney finds that the feeling wasn’t right, and there’s someone always on her mind, Adrian, who was there for her all the time, supporting her and looking after her.

The third book was more about magic, Sydney no longer hesitated to learn magic, she even summoned a little crystalline dragon and also helped to perform a location spell to assist her history teacher, ms Terwilliger in finding her sister.

Ms Terwilliger believed that her sister was stealing the youth of young girls who have some magic in their blood to keep herself young. Sydney was given a task to locate the potential victim and warn them about the impending danger.

Besides that task, she also started her quest in finding Marcus Finch, the ex-alchemist to clear some doubt.

The truth about the conspiracy slowly being revealed to her, and she then has to choose whether to leave the Alchemists and join Marcus in his rogue mission leaving Adrian and Magic behind, or stay with the Alchemists and in the risk of being caught.

The story narrated in two alternating POVs – Sydney’s and Adrian’s starting from book four onwards. It’s a great way to finally get inside the head of Adrian and witness the ups and downs that he experienced with his spirit ability.

While this book focused more on their forbidden relationship which they finally took to the next level, there’s others thing going on such as the arrival of Zoe, Sydney’s sister in the team.

Sydney taking a big step by embracing her magical ability and join the coven and the appearance of other characters from the Vampire Academy series – Rose, Dimitri, Lissa, Christian and even Sonya.

Zoe had reported Sydney to the Alchemist in the previous book resulting her to be sent off to re-education. She experienced the painful repercussions from the Alchemists for consorting with the Moroi and Dhampir.

Every time she disobeyed orders, she’s tortured. Throughout her days spent in the re-education camp, Sydney stayed strong and believed that Adrian would save her from the horrible place.

Adrian spent weeks doing everything he could to locate her whereabouts and also trying to dream walk with her, but he couldn’t connect with her, and that’s when Adrian starts losing hope after weeks of no results. But eventually, he managed to save her with help from Marcus, and they got married!

The last book started out with Sydney and Adrian still hiding out at court under the queen’s protection, but they were miserable.

Sydney had to live solely in the room, and Adrian’s mum was staying in the same house with them. When a lead on Jill’s whereabouts came to them, Sydney took off with Eddie and Ms Terwilliger to a dangerous magic quest.

There were many actions and things happened in this book including Sydney and Adrian suddenly have to play a role as a parent, Adrian and Dimitri found out that they were cousins, and Rose and Dimitri got engaged!

It had taken me a long time to finished reading the whole series and also writing this review, but it wasn’t because I disliked it. Instead, I was busy with packing/unpacking, battling the jetlagged for two weeks, and also making all the necessary relocation things in a new country/continent.

This series, in my opinion, was freaking awesome, although I must tell that in the beginning, it was a bit difficult digesting the story, and mainly because I still attached with Rose and Dimitri’s story.

However, I managed to let go of them and immersed myself in Sydney and Adrian’s story. I wished Richelle Mead would write more books about the world that she had created, there’s still something that she could write about such as Eddie and Jill’s relationship.

However, so far, she hadn’t written any yet. Anyway, I look forward to reading more of her books, and in fact, I’m reading her other series called Georgina Kincaid now.