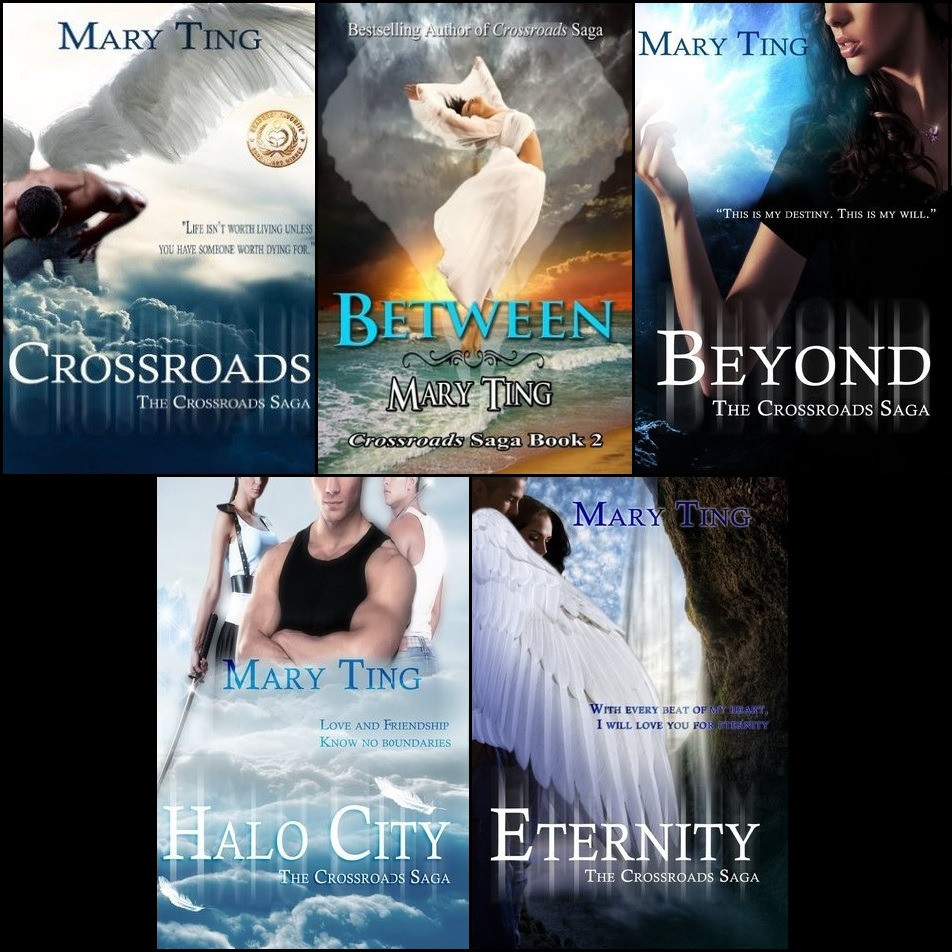 Love reading paranormal romance? Especially a forbidden love between human and guardian angel? Then this series is suitable for you. The series consists of five books which are Crossroads, Between, Beyond, Eternity and Halo City, which is a short story.

When Claudia Emerson was little, she used to dream some strange place, but not that she remembered her dream after she woke up. It was when her friend who shared the same first and last name died that she went back to the dream places, and this time she accidentally crossed over deeper into crossroads, the world between life and death.

Since then her life was in constant danger as the fallen angels led by Aden wanted her soul, he believed that Claudia has the soul of the holy spirit. A unique soul which he desperately needed to enter the Halo City and start the war.

One of the twelve angels named Phillip assigned Michael, the Alkin to be Claudia’s guardian angel. The other Alkins named Davin, Vivian and Caleb were also permitted to help Michael if he needed help. Michael who’s already in love with Claudia ever since he first saw her when she was little tried hard to resist his human emotion, but he failed.

On the other hand, when Claudia first saw Michael and even though Michael was rude to her, she still fell in love with him at first sight. Their romance was sweet but also forbidden, and they’ll need the others helps to make it happen.

I loved this first book because the emotions written in this story felt real, although sometimes it felt too sugary sweet, especially the romance between Claudia and Michael. The new world created by Mary Ting – Crossroads was interesting with the hierarchy of the Angels – the Royal Councils, the Twelve Angels, Earth Angels, the Fallen as well as the Alkins AKA Nephilim.

I can’t wait to find out about who’s the mysterious someone that Gamma had assigned to watch over her. Could it be the good looking guy named Austin? Or Patty, her childhood friend? There’s also a question on whether Claudia would have a special power, and hopefully, I’ll get the answer in the next book.

With Aden no longer a threat to Claudia, the guardian angels no longer needed to protect her. But their honeymoon period didn’t last long. In another place between Heaven and Earth, which’s called Between, one of the God’s first angel name Aliah escaped from the Abyss.

However, Aliah was trapped in between, and to set himself free, he needed Claudia’s soul. Aliah sent out his demons to find Claudia, and the Angels were back in duty, guarding Claudia 24/7.

Stronger enemy means more protection needed to ensure Claudia’s safety. The Venators which was another type of angel got involved in protecting Claudia. The leader of The Venators assigned Austin, Holly, Patrick and Trinity to team up with the Crossroads angels. Trinity and Michael were a couple a long time ago until they got separated during a war, and Michael thought that she was dead. Though Michael’s with Claudia, but Trinity still very much in love with Michael.

This series was getting better and better. Mary Ting never seemed to run out of ideas to make her story enjoyable. This time though, she included Garden of Eden, Adam and Eve, and the Grigori which was fascinating. My question to who’s Claudia mysterious protector and whether she would have a special power finally answered in this book. It was heartbreaking what Michael was forced to do, and I hoped I’ll get the answer in the next book about the possibility of Claudia remembering Michael as well as if Austin would make a move knowing that Claudia’s within his reach.

The Angelus Pugnators or also known as Angel Fighters was a new threat in town. Commanded by their master, they scoured the globe in search of holy souls with help from the demon that had been released on earth, possessing human and causing havoc everywhere.

Michael and Davin were both being assigned with a different task by their superior. Davin trained new Venators, and Micheal needed to find the Blood Seekers AKA Vampire named Caspian who needed help, and while he was away on his duty, he always managed to help Claudia whenever she was in danger.

Claudia found herself awaken in the Island of Eden with selective memories, no recollections of Michael, her mum and her friends in Crossroads or on earth. Believing it was because of the injury during the fight with Aliah, she started her training with Austin and also went on a mission.

However, she felt something was missing, especially when she got a flashback and saw a man who made her all tingly. Claudia was desperate and would do anything to get her memory back, even by doing something prohibited like taking the forbidden apple out of the island.

When I finished reading this book, I thought what a perfect ending, but it’s not the end yet, there’s one more book left, Eternity. I have no idea who else Claudia needs to fight with since the bad ones already down. But whatever or whoever it’s, I can’t wait to read it because all the books in this series were captivating, and the love stories, struggle and emotions felt real. Besides Claudia and Michael, I was also happy for Davin for finding the one. But before getting down to the last book, I’ll read Halo City, the short story first.

When the Angel war with Aden ended, Michael who sided with Aden had a severe injury, and the Divine Elders took him to Halo City to recuperate without his consent. When Michael was better, he tried to run away from the place to find Trinity, and also because he felt remorse from what he’d done in the past.

But his persuasive new friend Davin managed to convince him to stay, and with Claudia sudden appearance in Crossroads, it had made his life living in Halo City more meaningful.

This short story had helped me understand more about Michael’s character and how he came to be in Alkins team. He wasn’t all saint, and we could read it from the moment he was taken to Halo City to heal his injury after the war with Aden.

His attitude towards David, Vivian and Caleb when he first met them, the struggle to fit in, and his point of view when he first saw Claudia in Crossroads. Though we have already read some of it mentioned in the first book, it was still refreshing.

After all the hardship and battle Claudia had been through, the Divine Elders finally allowed Michael and Claudia to live together in their own space called Beyond. But their peaceful lives didn’t last long, Aden’s followers came out from hiding and started causing chaos on earth. Dantanian wanted Michael to rejoin the fallen team again, and he would do anything to get him on board, including hurting his Alkins friends.

Claudia lost her powers during her pregnancy, and it wouldn’t return even after giving birth. When her Alkins friends and Michael went missing, she was utterly helpless, she couldn’t go on a rescue mission, and the Divine Elders didn’t want to start a war with the fallen as there’s no proof if it’s their doing.

Eternity was the final book in this series, Oh my angels! I loved this series, the passion, the love, friendship, the panic in the battle and the emotions. It’s all felt real to me. Mary Ting had done it again. By the way, why was Davin not with Avalon? I thought they were a sure thing, and I really liked Davin’s witty remark, he’s such a funny Alkin. Though I’m sad it’s over, but there’s a spin-off of this series that I can read next, Yeah, and this time it’s about Claudia and Michael’s children. I hope it would be amazing too!