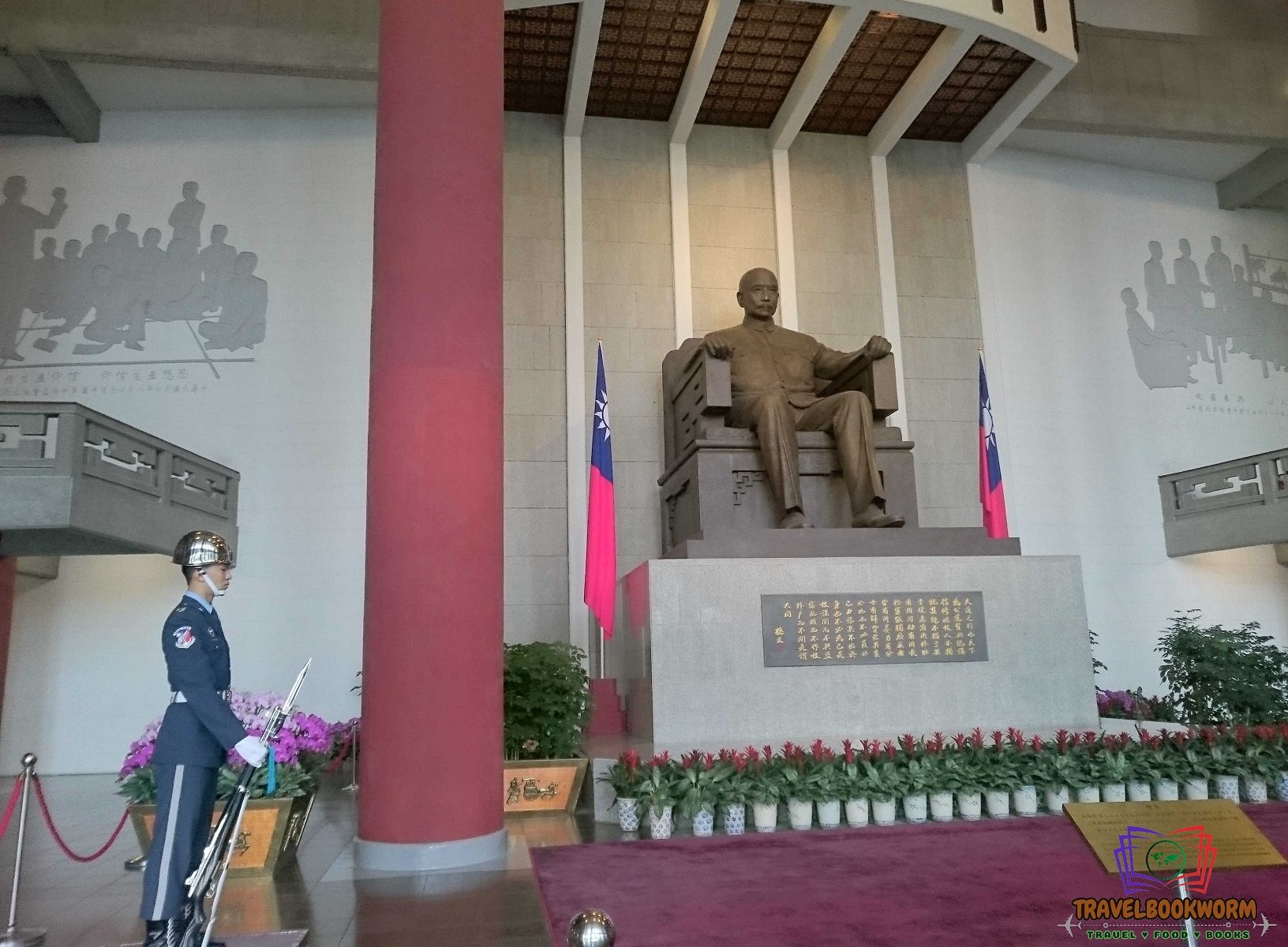 After the tour in Taipei 101 Observatory, we walked to the National Dr Sun Yat-Sen Memorial Hall. The hall was built to commemorate the 100th birthday of Dr Sun, the founding father of the Republic of China.

The government began planning construction in 1964 and finally completed it in May 1972 funded by the private sector. The height of the building is 30.4 metres with each side 100 metres long to symbolizing Dr Sun’s centennial birthday. The memorial hall has thirty thousand square metres of space.

Upon entering the 20 metres height front door, I could see the majestic bronze statue of Dr Sun with its height of 5.8 metres and weight at 16.7metric ton. We arrived just in time to watch the Honor Guards Changing Ceremony. The changing of guards take place hourly from 9 am till 5 pm. For a better view, you could watch it on the first floor.

Dr Sun Yat-Sen often talked about the revolution with his friends Yang Heling, You Lie and Chen Shaobai, they were nicknamed “The Four Bandits”.

In 1894, Dr Sun Yat-Sen wrote a proposal to an official in the Imperial court named Li Hongzhang. Although his proposal was rejected, he never gave up.

When the Sino-Japanese war began in 1894, he went to Honolulu and founded Society for the Revival of China “Hsing-Chung Hui”. It was the first revolutionary organization in China that gained support from Chinese living overseas.

After 17 years of attempting revolution and with 10 failures, he finally succeeded with the Wuchang Uprising and the Xinhai Revolution that followed. The two thousand years of monarchical dictatorship had finally being replaced with democratic governance.

The whole area was 115,500 square meters, and if we were to covered the whole area, we would be tired. So, once we’ve had enough of the place, we took the subway from Sun Yat-Sen station to Zhongshan Junior High School. It cost NT$16.

We rested for a while in the hotel before heading out for dinner. It was drizzling when we stepped out of the hotel. We stopped by at the seven eleven to get an umbrella. It cost NT$399 for a small folded umbrella, way too pricey considering the size.

We also went to a bar called Jolly and tasted their beer brew. However, Mike didn’t like it, so we only had a few glasses. Less time spending means less money spent, making up the bill of NT$288 only. He told me that he preferred the Queens Head brew in Seoul than this place.

Some of the Food & Drink prices in Jolly:

There’s a bar next to the hotel called My Other Place, the place wasn’t crowded, unlike Jolly and the drinks were much cheaper too. We had a few drinks and then paid the bill of NT$957 before retreating for the night. I can’t wait for tomorrow to come as we will be going to the Wenshan district for the Taipei Zoo and also Maokong. It would be refreshing to get away from the city to a more greener place.