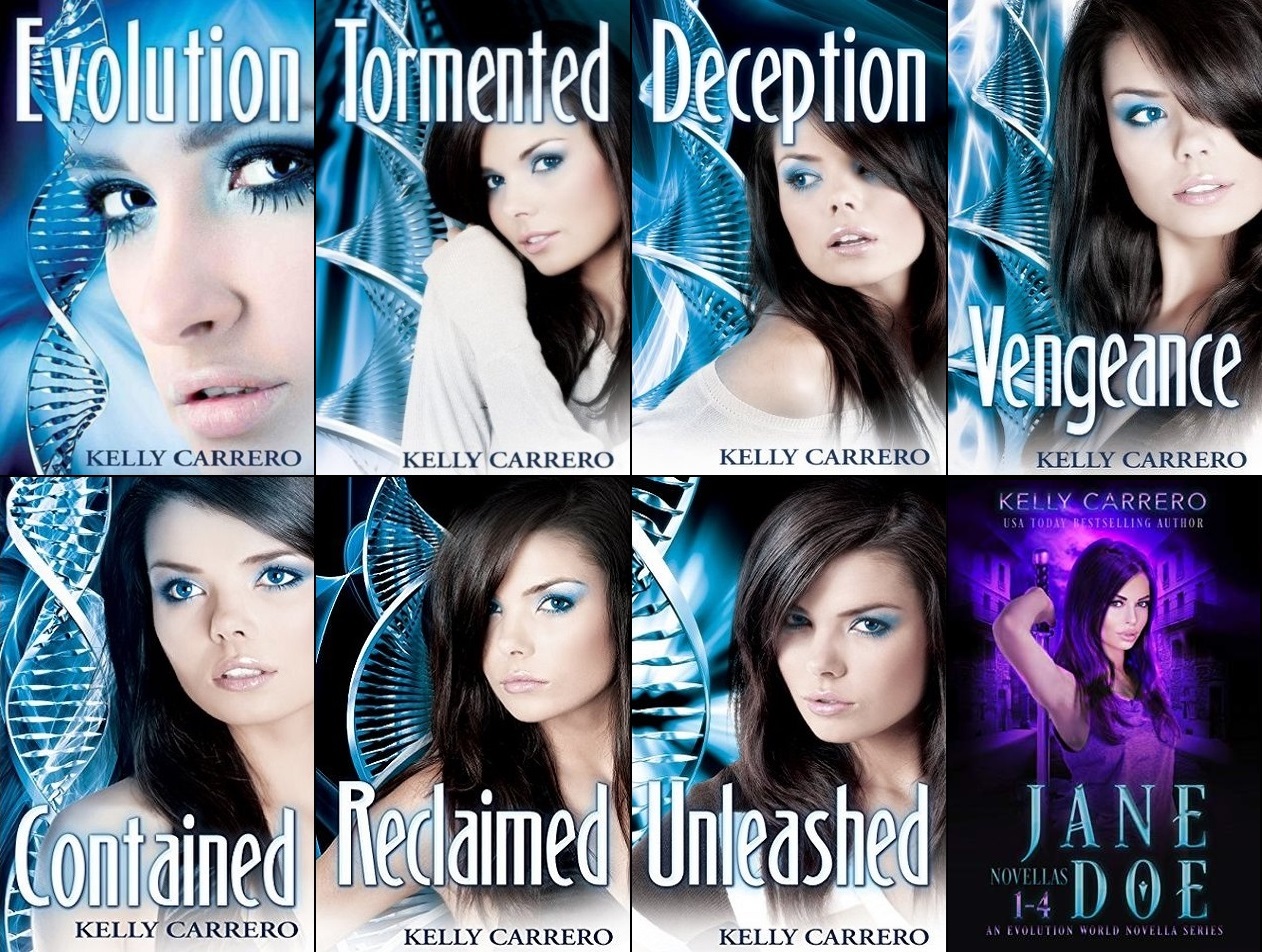 A psycho is hunting Jade down, threatening her life & killing people she loves. She will have to quickly master her newfound superpowers to defeat the evil.

Seventeen-year-old Jade Sommers life turned upside down the moment she saw the inch long cut across her face, heal right before her eyes.

Jade thought she was going insane, but her boyfriend Aiden Scott knew better. He knew what she was. And like him, she was born this way.

Now if finding out that people like her shouldn’t exist was bad enough, Jades best friend is kidnapped by the psycho who’s terrorised her dreams. With the help of Aiden, she has to figure out how to save her, before it’s too late.

But what Jade doesn’t know, is not everything is what it seems. She is merely a puppet in a sadistic game to find out what she is truly capable of – and the game has only just begun.

I quite like this first instalment. It’s light reading, short, no-nonsense, straightforward forward and not many dramas. Just one thing, tho, why is the heroine not questioning how she gets that ‘ability? If I were her, I would be asking about my lineage.

Jade is only just coming to terms with her mother’s murder when she discovers she is the centre of a sadistic game where the consequences will destroy the lives around her.

Who these will be will depend on Jade being able to figure out the cryptic messages before time runs out.

Someone will discover her secret.
Someone has been deceiving her.

And Jades life will once again be changed forever.

I knew it. The DD initial isn’t hard to guess, but after the revelation, accepting the truth about how psycho one can become is an entirely different story. Especially one that has blood relations. I wonder what his endgame is. If I were to speculate, I’d guess that he needs her to help him with something, which is why he’s so desperate to have Jade master all her abilities, no matter the consequences.

I’m excited and can’t wait to read the third book to learn more about Jade’s fate and abilities and if Chelsea ends up with Lucas. This book contains all elements, relaxation, suspense, heart-wrenching, fun and romance. A simple yet great read, indeed.

A father is supposed to be someone who loves you unconditionally. Someone who will care for you and protect you at all costs.

But Jade has discovered that not all fathers will love and care for you. And not all fathers will protect you. Some are just plain evil and Jade’s father is one of the very worst. She will discover her father’s tendrils go deeper than she ever thought possible and nothing is beyond his reach.

Ignoring her best friend’s call when knowing the situation she is in pisses me off. But all is forgiven when Jade lets Chelsea in her life and tells her almost everything about the next-gen.

True to the book’s title, deception contains many deceits. Some are surprising, especially the last revelation about Jade’s father. In my opinion, comparing the storylines with the previous two books, this one is my favourite.

Life doesn’t always work out the way you want. People deceive you and take things from you. But when someone takes the one thing most precious to you, how do you ever get past it?

The last few months have been a build-up to the moment when Jade will face off with her tormentor. Life will never be the same, and Jade knows it.

Can she work out a way to get it all back, or will she be damned to live an eternity where trust will always elude her?

This book is a quick read, provided with easy solutions and fewer challenges. I was half expecting Jade’s father to find out about Harry and kill him, which would ruin all the plans. But I’m glad it isn’t that complicated.

The story is without a cliffhanger, and if I dislike the series, this book can be considered the end of Jade and Aiden’s story. But because I liked the story so far, I will continue with the next book.

I wonder what else is in store for them. Could it be the effect on Jade’s blood in Chelsea, Marie and her grandma? Will they become one of them?

Jade thinks the worst is over when she puts her tormentor away for good. But visions of senseless murders still haunt her waking hours. Visions that Jade fears were her father’s plans all along, and will put the ones she loves in imminent danger—from herself.

Fate is not on her side as Jade tries desperately to hold on to her sanity and contain the monster within.

When I first heard about Jade turning evil, I felt uneasy about where the story was heading. Halfway through the story, I couldn’t believe her doing all the wrong things. I made a guess, and I was right in the end.

Still, I feel for Jade and cannot wait to read how she will save the day again. I hope Aiden and Chelsea will realise something is weird about this new Jade.

Two weeks ago I thought the worst was over. Now, I’m trapped in a cage and a woman I never knew existed has taken over my life.

Two weeks ago I began to lose the girl I loved. Something had changed in her, and no matter how much I didn’t want to believe it, the reality was that Jade was turning into the monster she feared she would become.

Jade never knew I existed, and now she is going to pay for it.

Excellent story, glad everything works out for Jade in the end, and I am pleased with how the story is heading. I suck for a happy ending, so I do hope Angel will get one for herself too.

One final book to read, hoping that Jade can pull off the best solution to the problems in their hands. The issues with Angel, the government, and also helping the rest of the captured next-gen. If it’s not too much to ask, please fix the relationship with Georgia, too 😅.

Timing is everything; but, for Jade, Angel’s timing couldn’t be worse. Pregnant and with the weight of the world on her shoulders, Jade does something she swore she’d never do—that was before she needed Nathan. Whether she can trust him, or not, is another issue.

Jade had thought Nathan’s games were bad, but Angel’s are so much more than she’d ever imagined. Angel is prepared to do the unthinkable, to draw Jade out. The only question is—how many lives will be lost this time?

The tension between Angel and Jade has been building up from the beginning of the story until almost towards the end of the book. Where the two of them finally meet up and begin the long-awaited fight. But the fight scene is immediately over in just a few pages, which is a letdown.

Nevertheless, the conclusion is as expected, and I’m pleased with the outcome! Everybody deserves happiness; I wish the same goes for Georgia, but never mind, I can live without knowing her ending 😆.

Overall, if you’re looking for a quick read that contains fun, great friendship, hatred, love, jealousy, and great superpower, this book is excellent for you. Also, if you enjoyed this series as much as I did, read Jane Doe, which is another compilation novella related to this Evolution series.

Waking up as just another Jane Doe in a world where people with special abilities—known as Next Gens—exist is bound to put a damper on anyone’s life—especially when no one comes to claim you.

That is, until one night someone sends me a very clear, disturbing message that turns not only my world but also my moral compass upside down when they force me back into a life I don’t remember.

For some reason, they think I’m a hitman and manipulate me into doing things that come far too naturally for my liking.

The smell of death awakens a sickening pleasure within me, and no matter how much I like it, I know I need to stop because I’m not that person anymore.

The only way out is for me to destroy them, and that’s exactly what I plan to do.

Jane, the main character in this book, has lost her memories, but it isn’t her worst problem. Someone keeps sending her messages asking her to run an errand – eliminating the chosen human beings, and if she refused, someone else would pay for it in blood.

Jane is desperate and needs to find out who she is and why she has the ‘hitman’ skill. While searching for the answer, time is also running out for her to complete the kill list, and if she fails, the person who cares for her will pay the price.

The story in this book has a connection to the Evolution series. Angel, the evil twin, made an appearance starting from book three onwards. In my opinion, the events in the story occurred just after Jade and Angel’s final battle. It’s kind of weird listening to Angel’s proclamation about Jade; it contradicted with what we heard from Jade’s POV in the main book – in the last part.