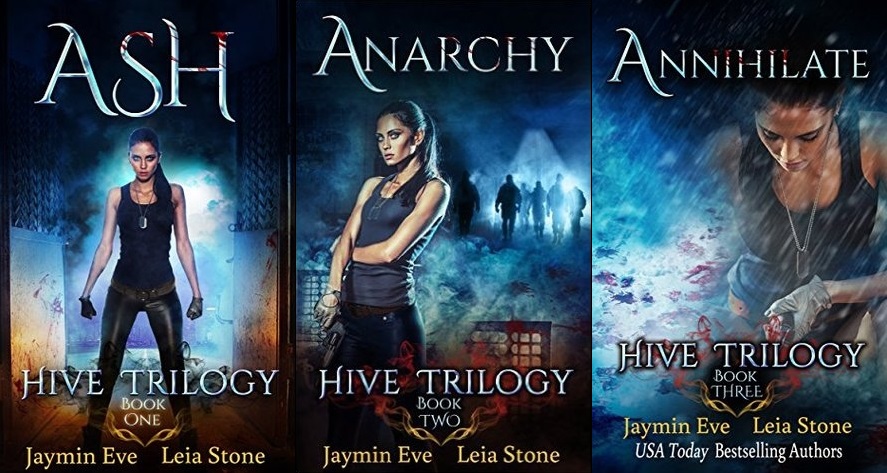 Hive Trilogy by Jaymin Eve and Leia Stone is a young adult paranormal story featuring Vampires, Humans and Ash – an offspring of Vampires and human beings. Our heroine, Charlie, is not happy with her new life. Her unique blood has made her a target, and to survive, she will need help from the six sexy Ash.

Are you an Ash?
*Increased stamina
*Lack of appetite
*Anger outbursts
*Insatiable thirst
*Beauty & Strength
*Male
Call the hotline if these symptoms come on suddenly!

Turns out Charlie Bennet was all of those things except the last. Don’t let the name fool you, Charlie was all woman and she wanted nothing to do with the ash … until the day she found out she was one.

It all started when infected bats bit a small group of humans and created what are now called vampires. Then, the male vampires knocked up some female humans and the result was a gorgeous race of all male ash. Superhuman freaks that had looked to kill.

Charlie is the first female ash, aka unicorn of the Hive – the gated compound in Portland that the humans have designated to isolate vampires and ash from society.

Problem? The Hive is full and only a select few will be allowed to live there. To live at all, really. If Charlie wants to earn the right to become a citizen of the Hive, she will have to survive the culling – a series of fights to the death. And guess what? Just because she’s a girl doesn’t mean she’ll get special treatment.

Good thing there’s Ryder, the mysterious lead ash enforcer, who seems to always have her back. But when secrets bubble to the surface, it will take more than one guy to save her.

Some of the plots reminded me of the Vampire Academy series by Richelle Mead. I could see Charlie as Rose and her gorgeous trainer, Ryder, as Dimitri. As much as I love the Vampire Academy story, I would much prefer if this Hive trilogy is heading towards a different direction. Let’s see how it played out in the next two books!

Did Charlie Bennett ever tell you that vampires are evil spawn? Well they are!

She’s had just about enough of them and when the unthinkable happens, she decides it might just be time to use her blood as a weapon against them.

It’s time for a little anarchy.

In book two, we see more on the politic side of the vampire, how the Ash being treated and finally, understand more on the sexy six team members. The mystery of the blond Viking vampire who had saved Charlie years ago was finally being revealed.  However, it wasn’t a surprise for me, as I’ve already guessed when I first read about it. It’s predictable!

Some of the scenes that I loved was during the attack by the Deliverance, where they teamed up with the Swat team. Another one was when they launched the rescue mission, which was almost towards the end of the story.

The storyline in this series was interesting enough to keep me going and read the final book. With all the crazy talk by Charlie such as changing human’s view of Ash and also destroying the Hives? I wanted to know how things would end.

There are two things Charlie Bennett despises: bullies and vampires. Which in her experience, is really the same thing. After the battle with the Quorum, she’s left with no other option.

The vampire’s rule must end. But when more shocking secrets are uncovered Charlie wonders if she’ll be alive long enough to follow through with her plan.

One of the sexy six members had kept a big secret, and it was the key to make Charlie’s plan ran smoothly. In this last book, we also get the answer to Charlie’s title.

The final battle was rather fast and easy, but not without loss from one of Charlie’s closest circle member, which I felt rather unnecessarily! I was a sucker for a happy ending to all characters!

Overall, the story was alright if you love reading a vampire story that has the same plot, for example, fallen for the trainer & the blood that cure vampirism. This series which only consists of three books will give you a quick and fun read. It’s suitable for middle adolescence as it does not have steamy sex scenes in the story.