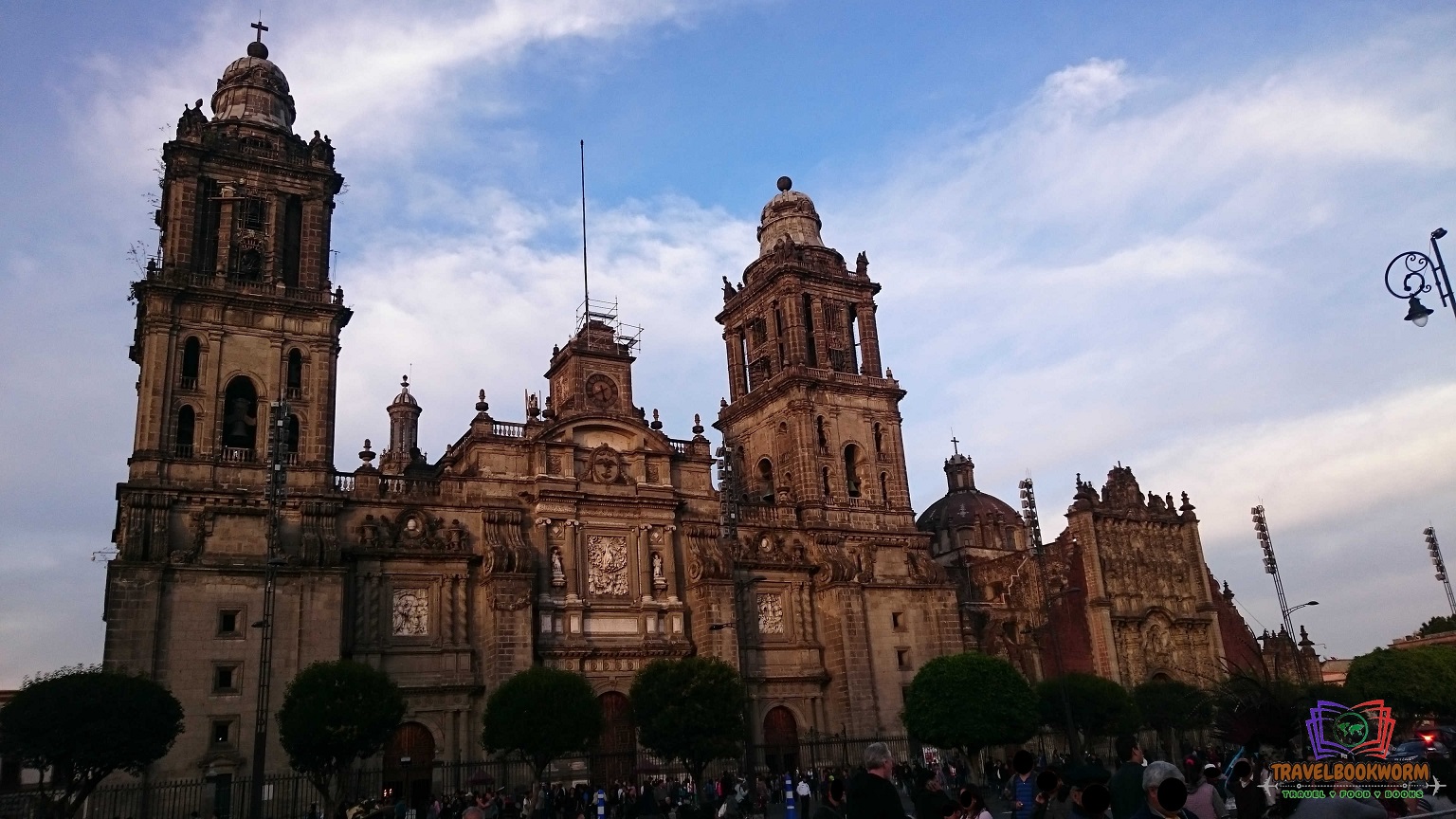 Although having no inflight entertainment in the Interjet plane from Dallas to Mexico City, it didn’t bother us much as the flight time was only about 2 hours 20minutes. At the immigration, there’re many counters in operation, and we didn’t have to queue for long.

However, with my Malaysian passport having no separation between surname & given name, there’s some confusion, and I have to go with him to sign some amendment paper. If I not mistaken when I first arrived in Mexico while on a connecting flight to Colombia, the officer had registered my surname wrongly in the system, and now they amended it with the form that I signed.

The taxi ride from the airport to the hotel we stayed took about 40 minutes. It was a bit jammed during the rush hour. When we arrived at the Hotel Diligencias, the reception couldn’t find our booking, but he managed to locate it after a while.

The location of the hotel was perfect. It’s close to the historical centre, eatery places in Plaza Garibaldi as well as the Subway station. The room was with a ceiling fan – no air-conditioning. However, it was pleasant, not too hot or cold.

The bed quality wasn’t as good as the one we had slept on in the US hotels, as well as Zach & Michelle’s house 😉. The windows were left open in the room as well as one in the toilet, and I saw mosquitos flying around. The room without soundproofed, and I could hear footsteps outside the corridor as well as from the staircase.

The reception staff spoke excellent English, and the guy that checked us in the hotel helped us with the question we had about buying the subway tickets as well as getting the bus to the airport.

However, with them losing our record in the hotel and claimed that we didn’t check-in, it had messed up their good score with us. We only found out about it when Agoda sent Mike the email when we got back to Bogota. Thankfully, otherwise, it would ruin our holiday. After providing them with the credit card statement, they admitted it’s their mistake.

It wasn’t long before we start moving again. Once we placed our backpack in the room, we went out to have some food. Our first stop was at a small stall near the roadside on our way to Plaza Garibaldi. We had two Quesadillas for the price of 40MXN.

After the little snack, we continued our walk to Plaza Garibaldi. There’re musician scattered around the plaza, some wandered to the restaurant next to the area and asked the customer if they wanted some music. It was quite entertaining to see the night came alive with all the music around you.

The place was buzzing, and the restaurant in the area all looking full house. The only available table was at Mexican Antojitos Licha. I had a coke and also ‘Vampire’ (cost 120MXN) – it wasn’t great though. Mike had 4 Modelo Negra, and we also ordered Al Pastor Tacos; It’s like a kebab and tasted good. Our total bill was 370MXN.

Some of the menu and prices:

Before going to bed, we also had drinks at the hotel’s cafe. The beers were cheaper than the restaurant we had earlier. While it was 45MXN there, it was only 36MXN in the hotel’s cafe. However, the choices of beers were limited to Bohemia and Indio. Mike had 3 Bohemia, and I had 1 Indio. We also managed to order Nachos just before the last call. The total cost was 200MXN.

The next morning, we had brunch at the restaurant next to the hotel – Restaurante Las Reyes. I had huevos with ham and Mike had huevos rancheros. We both took the Regular set which was 60MXN each. The service was slow. At first, they gave me coffee instead of tea before changing it to what I asked. They also asked Mike for his order twice. I finished eating my breakfast before Mike got his.

Chapel of the Conception Cuepopan

Founded in the 18th century, this chapel located in between the hotel Diligencias and the Restaurante Las Reyes block. It was closed down and reopened as a Morgue in the 19th century for those who couldn’t afford a proper burial. This chapel was Converted to a library in 1927 before it was declared as a historical monument four years later.

The waiting area for the tour was at the car park, and when we got there, others were already waiting for it. The guy in charge told us that there’s no English tour on that day, but Spanish. After more than 15 minutes waiting, a petite girl stepped in and introduced her self as our tour guide for that day.

She wasn’t wearing any official shirt or with a tag, and she was chewing on a sweet while talking to us, gesturing us to follow her inside the stadium to buy the tickets which cost 115MXN per person for the standard tour.

The tour lasted for about 45 minutes. During which she explained to us on the memorial plaques, guide us to the press room, home dressing room, players tunnel, and also the dugouts.

The construction of Estadio Azteca started in the 1960s due to the upcoming World Cup in 1970 as well as the growing support of Club America. Pedro Ramirez designed the stadium with the influence of European stadiums of that period.

The hard Volcanic rock on the land had made the construction progress slowly, and it took four years to complete building the stadium. When it officially opened on 29th May 1966, the first match held was between America and Italian side Torino.

During the World Cup in 1970, it hosted a total of 10 matches, among which a semi-final and the final between Brazil and Italy. Sixteen years later, it hosted the second World Cup final.

We had Quesadillas at the corner shop next to the station before moving on to our next stop, the historical centre near our hotel. The walk from Palacio de Bellas Artes to the Mexico City Metropolitan Cathedral was as expected – Enveloped with the sea of people there’s a risk of losing one another in this busy street!

The second place was also in the same area, and it’s called Cantina San Luis. I had two bottles of Corona, and Mike had two glasses of 1L Tecate. I also had my first Tequilla shot in here, and it cost 100MXN. In total, we spent 370MXN in this place.

The last place was more to a local bar. The waiters attired was a black and white uniform. Here, the Tequilla shot was much cheaper, 60MXN for each shot. I had four shots as well as a Corona. We spent 396MXN in here.

After three bottles of Corona and five tequila shots, I was in a land of nothingness. It was the worst drunken state I ever experienced! I couldn’t remember getting back to the hotel, and what I remembered was vomiting in the closet! I probably thought it was the toilet.

The next morning, upon seeing the state of the clothes which had been contaminated, I felt like throwing them all. However, if I did, I would have fewer clothes to wear the next trip to Guatemala. The good part was that I didn’t have a hangover. Once I clean the clothes as well as the dirty floor, I shoved the clothes in my bag and went to the reception to get a taxi to the airport.

The taxi to the airport cost 220MXN. Flying out was quite easy, we didn’t need to go through immigration, maybe the checking before the security check was the immigration? Because once we got through the security check, we tried the small immigration counter and showed our ticket and passport, but the officer just waved us off.

However, it wasn’t a smooth process when boarding the plane. We have to wait about fifteen minutes while standing on the almost full shuttle bus before we got on the plane. Our flight supposed to depart at 1:10 pm but it only took off at 2:02 pm. It was a bumpy ride, and we landed at Guatemala airport at 3:40 pm.