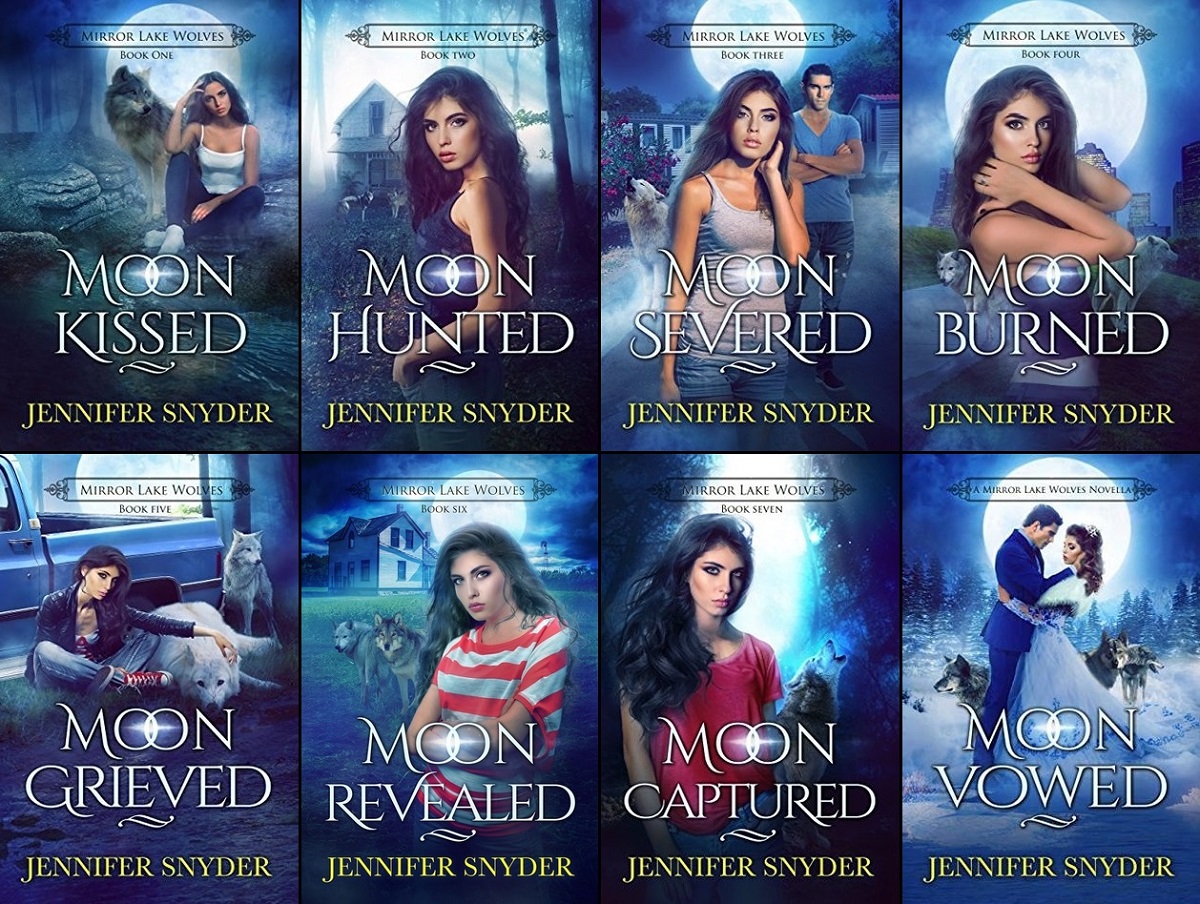 Follow Mina and Eli’s stories, the werewolves from Mirror Lake Trailer Park. Besides shapeshifters, there’re also witches and vampires featured in the series.

Life is different for those living in the Mirror Lake Trailer Park.

Mina Ryan has waited years for her werewolf gene to trigger. The clock is ticking, if she isn’t Moon Kissed soon, she runs the risk of becoming an outsider to her pack.

Bigger issues arise when Mina learns one of her pack members has gone missing. Even worse, she might know something about their disappearance. There’s only one person Mina can turn to for help. Too bad she has a hard time trusting herself when she’s around him…

With the full moon looming closer, the mystery of a missing pack member growing, and her attraction to the Alpha’s son blooming, it’s all Mina can do to keep her head and heart in check.

Eighteen years old Mina Ryan wasn’t sure if she would ever awaken the werewolf gene inside of her. She was a late bloomer they told her, which she was cool with it but in the meantime also worrying if she would be the outsider just like one of the girl.

I guess while waiting for the confirmation, Mina wanted some normalcy. Hence, she dated Alec, an ordinary guy instead of Eli, the pack leader’s son who showed some interest in her. The story was slow-paced and short, but since it still has seven books to go, I didn’t mind it. I hope there would be some action in the next book, right now it was just warming up, building the world, and some characters’ introduction.

I’ve always been on team Vampires, and the information on the ritual transformation was interesting since I haven’t read about shapeshifter books for forever! I hope by the end of the story in this series, it would be enough to entice me in reading more of the same genre!

Someone is hunting the Mirror Lake Wolves…

The woods of Mina’s hometown are no longer safe. Glenn has been abducted and now so has another from the pack. Guilt eats at Mina because the one missing should have been her.

In fact, it was supposed to be.

Determined to find the young werewolf taken in her place, Mina and Eli go on a hunt. They hope to find Glenn along the way, but instead, discover the length they will go to ensure their own safety as well as the members of their pack.

It was a short read, and the only exciting plot was the rescue mission. The scene, while they were inside the house for the rescue, had me holding my breath. Mina’s love interest bored me, and I wish she hurried up and let go of one of them as it’s inevitable.

I loved reading stories that are written in details as it helps connect to the character. However, I didn’t find it in the story. There’s some aspect left out without the action being completed, for instance, when Mina suddenly was able to buy her camping stuff without getting inside her house to get her 100 bucks in her drawer. I’m that observant 😁.

Anyway, surely in the next book we’ll finally see Mina’s decision about the boys? She better be!

Sometimes admitting defeat is the only option…

Mina thought her questions would be answered once Violet woke. Instead, she learned Violet doesn’t know any more than she does about who’s behind the pack member disappearances. However, there is something wrong with Violet. Her werewolf healing should have kicked in days ago, but it hasn’t.

Continuing the search for answers is the only option Mina sees. Too bad the alpha has given Eli and Mina a chaperone who’s hell-bent on making sure their every move is one of caution.

While slow and steady might win the race, it hinders the discovery of a missing pack member and leaves the newly formed trio with only one option: Mina giving herself over to the vampire in charge as a prisoner.

I’ve been thinking about what problem was more significant than the kidnapping of the member of the pack that had the Alpha’s attention away. Finally, we got a glimpse of it in this book. Also, Mina’s love life was eventually sorted out. But, I already saw it coming though, especially her choice, so it wasn’t a surprise.

Alec was such a cool guy, and I bet he has something up his sleeve. Anyway, I Can’t wait to find out more on what’s coming in the next book about the vampire matters and if they could save Glenn.

Time is ticking. The fate of Mina’s pack rests heavily on her shoulders. The moment she must give herself over to Regina’s vampire goons looms closer and it’s all she can do to appear strong. Focusing on Dorian and Eli’s plan and the knowledge she’ll be taking Regina down soon is all that keeps her moving forward.

But when the plan is botched, and someone else is taken with Mina to the city, she isn’t sure she’s strong enough to save him and do all she set out to.

Death and destruction will touch the werewolves of Mirror Lake. Who will remain standing after the smoke clears?

In my opinion, the story wasn’t bad; light reading with nothing heavy going on. The only moment when I felt the excitement was when they were in a mission – the same as the previous book where I had an internal shouting going on, begging Mina to run and stay safe 😁.

If it weren’t because I knew there’re more books to come in the series after this one, I’d say it’s an excellent finish to the series. The story was tied up nicely; mission accomplished. If you’re not into the book, you can stop here. As for me, I’ll continue since I’ve already had all the books ready to be read. Come on Jennifer give me something that would make my heart racing!

A new threat has come to town, one who doesn’t seem to be hunting just the werewolves this time around. Instead, it seems as though anyone in town is fair game.

Mina’s gut has been telling her the person responsible isn’t human, but will the others believe her intuition or will heartache fall on the pack before they see reason?

At first, I thought it would be about Mina’s sister and Cooper or even Mina’s children. But the story picked up where it left on the previous book – Mina moved to live with Eli and continuing with the story being told in Mina’s POV.

Nevertheless, the author managed to write another exciting story; something sinister was coming to the Mirror Lake and the pack needed to catch the culprit before it’s too late.

In this book, someone had died, which I didn’t like, but I guess that’s what makes a story more compelling, and we get to see how well the characters handled the stresses.

Sometimes the enemy of your enemy becomes your friend…

With the help of a stranger her wolf doesn’t trust, Mina learns the Midnight Reaper’s identity. She also makes a deal with the newcomer, one Eli might not agree with.

But when the safety of the pack becomes a top priority and a secret about someone close is revealed, putting a friend in dire danger, priorities pivot.

Short, but another great continuation to the series. I especially loved the part towards the end where Mina let Benji into their supernatural world. Together with the rest of the group, they try to stop the evil, prove that the supernatural team could work together. I didn’t expect the thing about Benji tho 😁.

I’m looking forward to the rest of the books in the series 👍.

Roman is still on the loose. When another innocent human dies because of him, Mina becomes more determined than ever to take the vampire down. Especially once she finds herself marked by him.

Relying on the strength of her wolf and her quick wits might not be enough. Forming an alliance with all supernaturals of Mirror Lake may not either. It might take all of that plus a little magic to do the job.

I have a question. How did Eli know which part of Mina’s body was bitten by Roman? Roman asked Mina to have it bandaged, but Mina didn’t specify where she got hurt though. She could have been bitten on the legs, arms, thighs etc 😁.

Anyway, besides some minor glitches in the story, it was still a fantastic read. Coming to the last book, I have no idea what it would be. Probably a short story about the marriage. Then what about the evil vampire? Will we get a conclusion to it?

The wedding of a lifetime. A threat from the past. And a holiday season everyone is sure to remember.

Eli should be focused on holiday plans with Mina, helping his family through their first Christmas without his father, and asking for Mina’s hand in marriage. Instead, he’s struggling to vanquish old ghosts that shouldn’t be hanging around the trailer park and protect his pack.

When he learns of the spirits’ agenda, Eli must do everything in his power to make sure the newest member of the pack stays safe…even if it means risking his own life.

This novella was written from Eli’s point of view, which was different compared to all the previous books in the series. I liked what I read and to be able to understand what’s in our hero’s head; it didn’t disappoint me.

Werewolves, witches, vampires and now ghosts, woohoo. Jennifer blew my mind away. I loved the combination and admired her for her creativity to keep the story going.

While there’s no new book after this novella, for me, it didn’t sound like this was the end to the series because based on the previous book, there’s still some loose end about the evil vampire? Maybe the author had written it in a separate series if so, I’ll catch up later 😁.