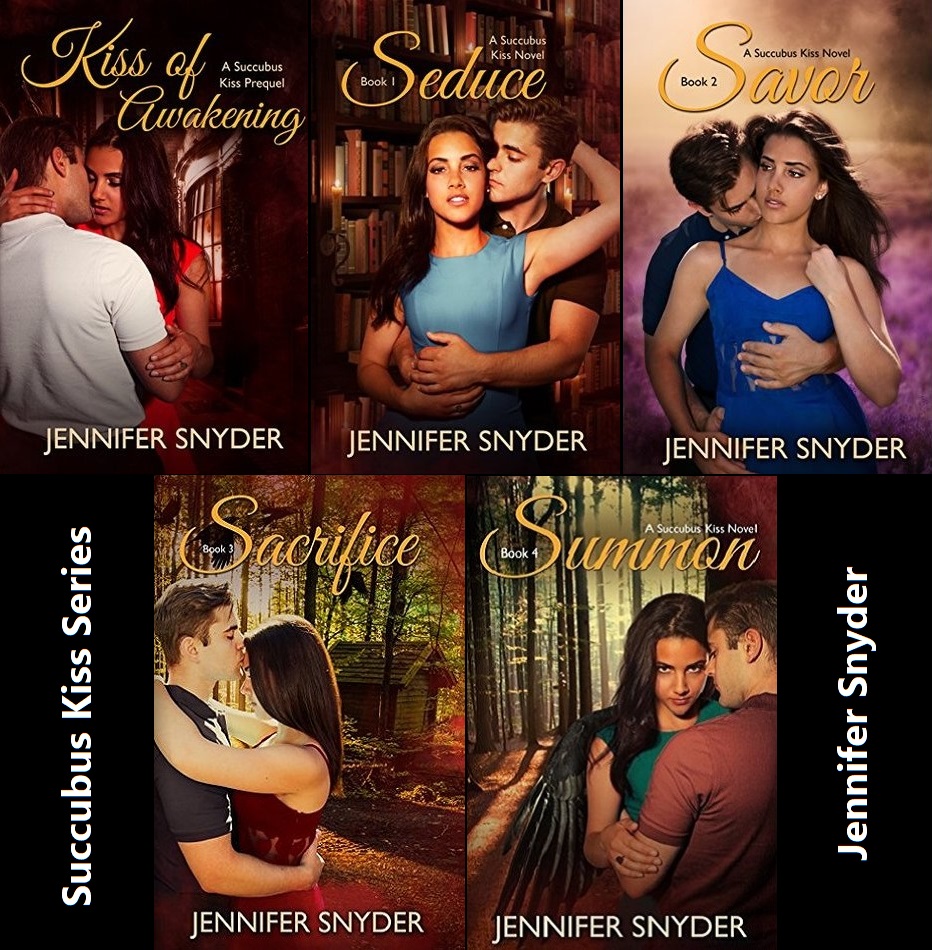 Meet Kenna, a Succubus with a conscience. But when a wraith infected her, will she stay pure or succumb to the darkness growing inside of her?

One kiss will change everything…

When a mysterious letter arrives from her estranged mother, Kenna is prompted to take a trip to New Orleans at her mother’s expense.

A little Halloween fun in the Crescent City was all she wanted. That, and the chance to speak with her mother face-to-face. What she got was a frightening ability she can’t explain and life as she knows it altered forever.

Will the new world Kenna’s eyes have been opened to crumble her reality or will she find a way to accept what she has become?

I read this short story in one sitting. The introduction was interesting enough to have me going until the end of the story, and still wanting for more! Thankfully, this was only the start of it, and all main books are available to be read now. I hoped that the rest would be as good as this one!

Kenna’s friend, Bree, was so supportive, and I loved her easy-going attitude. It brought light to the gloomy situation Kenna was on, and their night out in New Orleans was much more fun with her appearance. Delvin was a likeable character too, but it was a shame that I guess his journey ends in this book. I would love him to be in team Kenna😄!

Her kiss can kill…

Kenna might be the only Succubus with a conscience, but life isn’t so bad now that she’s figured out a specific way to find her male meals.

The only issue is her nonexistent love life.

That all changes when a handsome stranger walks into her life. He may be a legendary vampire, but at least she can kiss him without killing him. However, dating the inspiration for Dracula might be more than Kenna bargained for.

Kenna was one of a kind Succubus. While the others taking advantage of their ability to seduce men and live in a luxurious lifestyle, she viewed her power as a curse, and work hard in a bar to earned her keep.

The story started slow, I mean, we all knew that Kenna would be with Randal, but they only started interacting after going about 50 per cent in the story. I didn’t mind it though, because I got to know more on Kenna’s way of dealing with her power and how she put it to fair use. Besides, we learned about Dex, the understanding and funny werewolf 😊.

I was a bit disappointed though, I thought Bree would continue to be with Kenna, supporting her in her new lifestyle, but she wasn’t in the shadow anymore. Instead, Sage was introduced as Kenna’s friend/colleague. I wouldn’t say I liked her; I was a bit sceptical of her. She might be the one who alerted the wraith. I’ll have to check the next book ASAP and find out more!

Succubus Kenna Blake has been infected by a wraith…

The infection is just the beginning. As the wraith slowly gains control, Kenna must fight to keep a firm hold on her succubus nature, before she disappears completely.

Following the only clue her mother has to offer, she tracks down the infamous Luke Bloom, owner of Love Potion #9, hoping for the answers she desperately needs. Unfortunately, Luke doesn’t harbor the magic that could rid her of the wraith and save Kenna’s soul…but his twin sister, Lexy does.

The problem: Lexy Bloom relinquished her magic five years ago and went into hiding.

As Kenna finds herself plagued by nightmares created by the wraith, she vows to do whatever necessary to rid herself of its darkness. Until she learns her only escape comes in the form of a rare spell requiring a shocking cost…

I wouldn’t say I was happy when Bree finally made an appearance in the story. The timing was off, and I could feel the strain moments, which wasn’t enjoyable. At least that’s what I felt because my concern towards Kenna’s situation was eating me up. I hoped they would meet up again in different circumstances.

From the story, we learned that Kenna was a good friend, and I liked her attitude. I was surprised that Randal didn’t possess a persuasion gift, the standard power usually accustomed to Vampires. Well, at least something was different in this story.

When Kenna finally met Lexy, it was such relief until Lexy revealed the final blow, which made me feel hollow. I was gutted and completely understood the turmoil inside Kenna’s head. So far, I loved the storyline, and I’m feeling a little nervous about what would happen in the next book. Would she be able to get rid of the Wraith without the sacrifice? Or if it’s inevitable, who the person would be 🤔?

The battle between Kenna Blake and the wraith isn’t over…

As the wraith grows stronger, Kenna is forced to follow the devastating path she has struggled to avoid since becoming a succubus. Her desire to free herself from him increases—but the cost of riding herself of the wraith comes at a shocking cost she isn’t willing to pay.

Once she commits an unspeakable act while overtaken by the wraith, Kenna fears he has won and that she is out of options, as well as time. It is after this devastating moment occurs that a savior steps forward, willing to sacrifice eternity for her salvation.

Will Kenna change her mind and allow someone to pay the ultimate price for her soul?

Kenna’s still harboring hope that Lexy would find another solution to her problem. However, the clock was ticking. Her relationship with Randal solidified, and so did the wraith, who had gained control over her mind. On one faithful night, she finally lost control, and it changed the life of one person that she was desperately trying to protect.

One more book to go, and hopefully, we would read about HEA life for Kenna. She suffered enough, and although I was a bit mad at her in this book for blaming Randal for Bree’s situation, I still wished her to live her happy life with Randal.

I don’t want to reveal more, just that I knew that Landon wouldn’t have a chance with Kenna. I knew about it because I’d read the spin-off to this series – Ward Witches! So, stay calm, and everything would be alright 😊.

The clock is ticking…

The wraith continues to tease the strings of Kenna’s self-control, feeding his own sick desires with her inner turmoil. Randal’s disappearance haunts her. And magic lurks around every corner, threatening to weave a tighter web of secrets and lies around her.

It isn’t until a new spell is revealed that Kenna feels a glimmer of hope. If all goes well, she might become the hero of her own dark fairy tale…

The final battle between the wraith and Kenna! The ending was as expected, the culprit exposed, but it didn’t surprise me at all because I’d predicted it since the beginning of the story. However, it was still enjoyable, especially when everyone has the HEA, except for the culprit, of course.

Now that this series is over, I hope one day, Jennifer would write a story about Darius! He’s an interesting character, and I would love to find out how he ended up there. For now, I’ll read Catalyst, the first book from the Tethered series. However, if you haven’t read the spin-off to this series called Ward Witches, in which the first chapter was included in this book, please do so before moving on to the next series 😊.