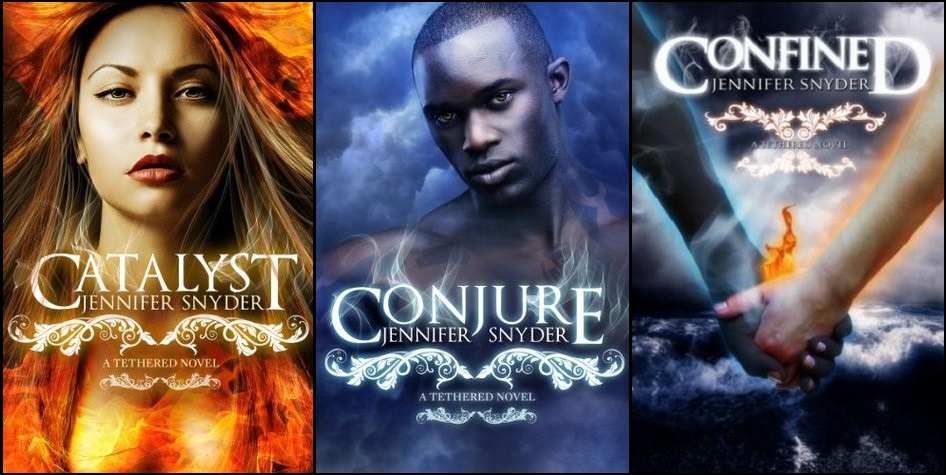 Summer is supposed to be fun for Addison. She inherited a house that comes with a cat, hidden magic, romance & friendship. But it wasn’t sunny all day. Someone wants her out, and danger seems to be following her around!

Sometimes who we really are lies buried just beneath the surface…

After learning she’s inherited a house in the beachside town of Soul Harbor, Georgia, Addison Harmon and her best friend decided to take a vacation before the pressures of life after high school suffocates them too heavily.

She wasn’t counting on meeting someone who with one touch reveals a seductive world full of magick and secrets Addison isn’t sure she’s ready to be a part of.

Enter the magickal world of Soul Harbor in Catalyst, the first book in the Tethered series, a romantic, action-packed series that fans of The Secret Circle are sure to enjoy!

Addison went over to a little town to check out the house she inherited from her mother and was thinking of spending her summer there. However, when she received a lousy welcome from the peoples, she wasn’t sure anymore. It wasn’t until she met Kace that she decided to stay and find out more about her heritage.

The story was fun, easy to read and sweet but beware as it also came with a terrifying moment – The red creatures! Addison was a likeable character; I also loved the supporting character AKA Addison’s friend. She was fun to be around. She reminded me of Bree from Succubus Kiss series.

The male characters, Kace, was sweet, and Theo was the bad ones. I thought for sure Addison would be with Kace because they progressed real fast, but after reading the last chapter, I wasn’t sure anymore 🤔. Guess, I’ll find out more from the next book.

Forced to partner up with Theo to figure out a way to break the tether, Addison soon realizes she may have bitten off more than she can chew.

Return to the magickal world of Soul Harbor in Conjure, book two in the Tethered series, a romantic, action-packed series that fans of The Secret Circle are sure to enjoy!

Book two started with where it left on the first book. Addison tried to find out why Theo saved her and the meaning of her being tethered to him. While the two of them tried a few spells to break the connection between them, Kace and the team felt hopeful for Addison to agree to the initiation, which turned out might be the solution to her problem!

Book two made me feel like shouting to Addison and letting her know why her mother had left her. But I couldn’t LOL. It’s quite frustrating how she speculated the reason while we knew the fact. Although I sometimes felt like the story was predictable, there’s still some mystery and twist that I must admit it was awesome 😊.

To Addison Harmon becoming initiated appeared to hold the answers to her every problem—all except what she would do after, when the tether was finally broken. But when the after Addison imagined isn’t the one unfolding before her, she finds herself tangled even further in a web of secrets, lies, and betrayal.

It’s not until Addison is captured by the last person she ever suspected would betray her that she’s forced to rely on herself for survival.

Questions will be answered. Trust will be misplaced. And hearts will be broken.

Gosh! The question that bothering me throughout the whole book about something big was brewing was finally answered right at the end of the story! The author knew how to make her audience suffered! Anyway, there’s no surprise here who’s the biggest culprit, but it was weird that the person didn’t feel any remorse treating his blood and flesh that way.

Tethered was the fifth series I read by the same author and frankly speaking, I didn’t enjoy this as much as the previous stories. There’s not much going on besides the big mystery, and if I were to summaries the whole event that had happened, it could be done in just one book. It’s time to move on to the final two series that I would like to read, which was also by Jennifer. I might read Marked Dualogy first and finished off with Reaper series!